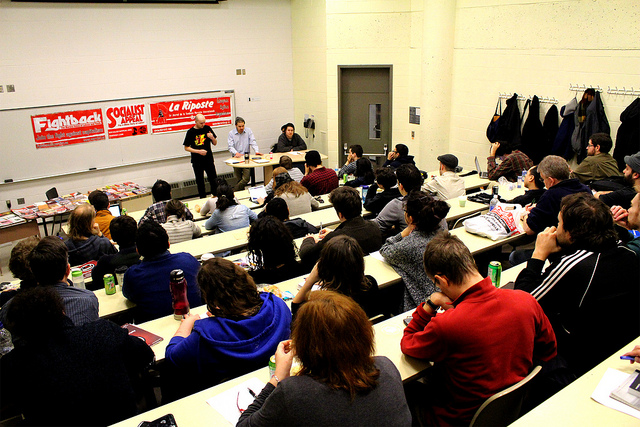 Over 60 comrades attended the third annual Marxist School in Montreal this past weekend, a significant increase from previous schools. Organized by supporters of La Riposte (Quebec), Fightback (Canada), and the Workers' International League (USA), the school was a resounding success, helping to unite revolutionaries from eastern North America in common struggle. Comrades from Quebec, English Canada, and the USA enjoyed two days of vibrant political discussions in both French and English, using consecutive translation during all discussions.

The most important lesson of the weekend was the urgent need for a revolutionary Marxist tendency.  This year’s school took place in the context of ongoing and new global uprisings. The revolutions in the Arab world have reached a new stage of development, with a second wave sweeping across the region. In Europe and North America, tensions between the majority population and minority ruling classes are growing to a boiling point. The inability of the ruling classes to resolve the contradictions of capitalism has resulted in the surfacing and resurfacing of revolutions across every corner of the world. More and more workers and youth are turning to the ideas of Marxism in order to understand the problems of the system, but more importantly, to also find the methods in order to overthrow capitalism.

After a Friday night social at the Jazz Hostel in downtown Montreal, comrades woke up on Saturday morning to pack a lecture room inside the Université du Québec à Montréal (UQAM), a location at the centre of the historic Quebec student movement several months ago.

Camilo Cahis from Fightback’s editorial board delivered the opening presentation, “Perspectives for the European and Arab Revolutions”. Camilo explained the fact that there is no shortage of events across these regions which are driving workers and youth into struggle. As Marxists we focus on where class struggle is the greatest and where capitalism is the weakest. Today, Europe and the Arab world fit these conditions as the capitalist crisis worsens.

Noticeable in both Europe and the Arab countries is the rapid development in the consciousness and understanding of the working class, in contrast to the pessimism often held by bourgeois and academic commentators. During the discussion that followed the presentation, comrades provided their own experiences to expand on the perspectives for revolution across the world. The common theme was that revolution is never a one-act play; the masses have toppled reactionary regimes, but they are also learning that the work is far from over. In Egypt, we see a resurgence of the revolutionary movement that toppled the Mubarak dictatorship, which has realized that the bourgeois Morsi regime has attempted to steal the revolution away from them.  Another theme that came up during the session is the importance of a revolutionary international, which can unite revolutionaries and militants around the world with a common program of struggle.  US comrades spoke on the influence felt by US workers from the European movements and Arab revolutions. A variety of examples were raised demonstrating working class solidarity and successes.

Camilo finished his presentation by saying that in Greece, Spain, Tunisia, and Egypt, the conditions already exist for capitalism to be finished once and for all. The missing factor is a mass revolutionary organization that can tie all of these struggles together, and provide the ideas and tools necessary for the workers to overthrow the bourgeois regime. Camilo said, “The working class has never been more organized and capable to fight for socialism. All that remains is the leadership to bring the working class to power.” But before the audience clapped, they patiently waited to let one of the La Riposte comrades finish translating those last words: “La classe ouvrière n'a jamais été aussi organisée et capable de lutter pour le socialisme. Tout ce qui reste, c'est le leadership pour amener la classe ouvrière au pouvoir.” The commitment to discuss in the language of all those present by the Marxists in North America reflects the spirit of internationalism that is required if we are to successfully build a socialist society.

During the translation, comrades Nichola, Benoît, Brian, and many more from La Riposte in the room, would frequently rotate positions as soon as one of them needed a drink of water or some rest. The solidarity between the French and English speaking comrades was quite inspiring as they showed commitment to running the school.

After lunch, Alex Grant gave a lead-off on “The History of Class and National Struggles in Quebec”, a crucial topic of discussion among the French and English comrades present inside the UQAM lecture room. The national question is a sensitive topic that deserves a continuous discussion among the comrades. The presentation was followed by a fantastic show of comradely interventions by both French and English speaking comrades on the topic at hand. Everyone agreed that this was one of the best ever discussions on this question held by revolutionaries fighting the Canadian federal state. There was a unanimous commitment to adopt strategies, tactics, and theory that promotes class unity and an end to all oppression.

As Saturday finished comrades went back to the Jazz Hostel for a social to unwind, eat, drink, and continue some of the motivating discussions from the school. Everyone worked as a group to help each other to set up the social and make sure that it was a success. The people running the hostel, in an example of local solidarity, donated an extra case of beer, for which all of the comrades were extremely appreciative!

Comrades returned to UQAM Sunday morning to use the tools provided by the first day’s sessions in order to build the Marxist forces in North America. In the morning, the comrades discussed the ideas of the great Marxist thinker, Ted Grant; this year marks the 100th anniversary of Ted’s birth. Ted provided enormous contributions to Marxist theory after the death of Leon Trotsky and helped to re-orient the Marxists after the degeneration of the Fourth International; Ted helped to build the Militant tendency into one of the largest Trotskyist organizations in history by the 1980s. The comrades were urged to return to Ted’s ideas, which are perhaps more relevant today than when they were first written.

The comrades then eagerly waited to listen to Tom Trottier, a New York comrade from the Workers’ International League, who finished the school with a presentation on, “What is Bolshevism?” Tom gave an excellent historical analysis of the Bolshevik party, its role in the Russian revolution, and more importantly, the lessons and traditions that we can use today to change society from their experiences. Tom gave an impressive lead-off of one of the most important topics for any Marxist to study. It is vital for Marxists to study the greatest revolution in human history and those involved, and how the Bolsheviks were able to lead the Russian working class to power. The genuine traditions of Bolshevism are far different than the subsequent degeneration that occurred under Stalin.

As discussions came to a close, French and English speaking comrades worked tirelessly to ensure that every point made was translated, an important advance in the work of fully allowing comrades in both Quebec and the rest of Canada to actively participate in the discussions and requiring a certain degree of organization so that the translations went smoothly. Following the international tradition, the weekend was finished by renditions of “The Internationale” and “Bandiera Rossa”, which were both sung loud and clear to mark the end of another successful and inspiring Marxist Winter School.

It has been nearly five years since the latest financial crisis and the current crisis of capitalism is only getting worse as time goes by. As revolutions spring up and fall across the globe, the need for a revolutionary tendency has become the most important task for Marxists in order to lead the working class towards socialism. Armed with the right Marxist ideas and methods, a united international struggle against capitalism cannot be stopped.  The work ethic, solidarity, and optimism between comrades — in English Canada, Quebec, and the USA — this past weekend is a shining example of what is possible by schools such as this. The struggle against capitalism has only just begun — we invite our readers to join us in this task.

For more pictures from this year's Winter School, please visit our Flickr site.