Details
The Struggle Editorial Board
10 March 2009

Share
Tweet
The North Punjab Regional congress of the IMT's Pakistani section was held on March 8, in Rawalpindi. More than 120 comrades from Rawalpindi, Islamabad, Attock, Taxila-Wah and Abbottabad areas participated in the gathering, including trade union comrades, the PTUDC, People's Youth Organization and JKNSF.

The North Punjab Regional congress of the IMT's Pakistani section was held on Sunday, March 8, in Rawalpindi. More than 120 comrades from Rawalpindi, Islamabad, Attock, Taxila-Wah and Abbottabad areas participated in the gathering. Also present were comrades from the Trade Unions, the PTUDC (Pakistan Trade Union Defence Campaign) and traditional youth organisations such as the PYO (People's Youth Organization) and JKNSF (Jammu Kashmir National Student Federation). The programme was chaired by comrade Zafar. 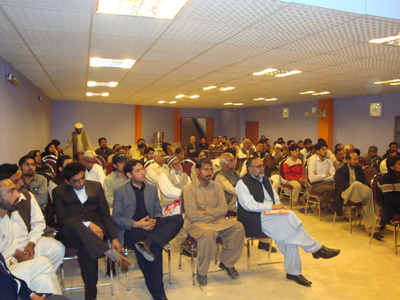 In the lead off comrade Paras Jan explained the international situation and the economic crisis and its affects on the working class the world over. He said that there in no fundamental difference between the religious extremism and American imperialism. Both the present government of Pakistan and the opposition parties are trying to convince the Americans that they can best serve the interests of imperialism. Comrade Paras said that if Zardari fails to privatize the 21 state institutions which he has announced, then the right wing will be asked to do the job of fulfilling this condition imposed by the IMF for further loans.

There were healthy contributions from many comrades in which they answered the questions asked by the audience and further enriched the discussion. Comrade Akram Bunda, Deputy Secretary General of the Pakistan Workers' Federation North Zone in his contribution explained the class character of the government and that of Pakistani politics. He said that Rs. 450 billion have been given to the capitalist as bailouts. He spoke about the miserable conditions of the working class and the poor of the country. He also gave an account of the attacks made against the working class by the Pakistan People's Party government, which had been elected a year before on the programme of Roti, Kapra, Makan (Bread, Clothing and Shelter) and Jobs.

Malik Nawaz, leader of the Pakistan Railways Worker's Federation said in his contribution that if the government tries to privatize the state institutions the workers will be left with no choice but to occupy them. He rejected the option of negotiations on the issue of privatization. Regional Organizer of the PTUDC and PFUJ (Pakistan Federal Union of Journalists) activist, comrade Rana Abrar said that the workers' movement against the proposed privatisation could play a decisive role in the Pakistani politics and can stimulate a mass revolutionary uprising. Comrade Khawar Mehmood who is the Joint Secretary of the Telecom Foundation Workers' Union and the President of PTUDC Islamabad Industrial Area vowed to fight for a socialist revolution till the very end and expressed his belief in the victory of the working class. Comrade Qamar Abbas Kazmi, Rawalpindi City organizer of the PTUDC spoke about the oppression of the women under capitalism and criticized the role of the feminists. He said that the emancipation of women is only possible through a Socialist Revolution. Comrade Changez Malik regional organizer of the BNT (Unemployed Youth Movement) shed light on the revolutionary role of the youth by giving examples from the 1968-69 revolution in Pakistan. He highlighted the problems and issues faced by the working class youth in Pakistan today. He emphasized the responsibilities and the character of the revolutionary youth. Comrade Malik Sajjad briefed the participants about the preparations regarding the upcoming National Congress in detail and stressed the revolutionary self-discipline required during it.

Summing up the discussion comrade Paras explained the nature and the magnitude of the contradictions within the Pakistani state. He pointed out the need to build a revolutionary organization capable of leading a Socialist revolution in Pakistan which will be the first step towards a Socialist Federation of South Asia and ultimately a Global Socialist Revolution. In the end the delegates for the national congress were elected unanimously. The programme was concluded by singing the Internationale by all the comrades.