In what is now becoming a tradition, this weekend the third North European Marxist School was held in Poland, where 40 young comrades took part in discussions on Fascism, Stalinism and The ABC of Trotskyism.

"One time may be accidental. Two times a tendency. Three times is a tradition." If that's correct a tradition was establish in Ustron, just south of Katowice, Poland this weekend.

Following the successes of previous Northern European Marxist Schools in Copenhagen in December 2005 and in Stockholm in January 2007 our polish hosts did an excellent job in providing the framework and logistics for a weekend full of political education for the 40 young comrades and sympathisers of the IMT from Poland, Sweden, Germany and Denmark. 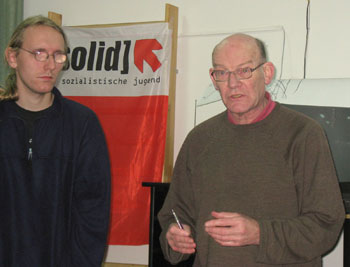 The weekend was focused on a number of "ism's" that sometimes are carelessly thrown around in debates in and outside the labour movement. The main three political sessions where on Fascism, Stalinism and The ABC of Trotskyism.

The discussion on Fascism was excellently introduced by Mick Brooks, from the editorial board of the British Socialist Appeal. He used the classical example of Germany in the 1920's and 1930's to show how each step in the development of the Nazi Movement was preceded by a failure on the part of the Communist and Labour leaders. "In each crisis the labour movement had the chance to strike first. When it failed, reaction could move ahead." 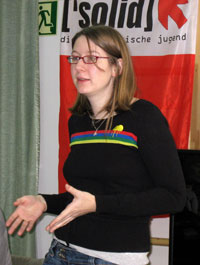 Mick also, in a very pedagogical way, showed how Trotsky's slogan for a "United Front" between Communist and Social Democratic workers was exactly in tune with Bolshevik tactics when the revolution was threatened by Kornilov in 1917. Instead of a Bolshevik tactic in the 1930's we were forced to observe the Comintern's stunts of the "Third Period" where everyone was a fascist and all where enemies of the same sort, leading the German CP to clash with Social Democracy rather then the Nazis.

The following political session was fittingly on Stalinism and Agata Rozenberg, from the polish Marxist site www.socjalizm.org gave an extremely sharp introduction proving that there is not the slightest political continuation between Marxism/Leninism and Stalinism. In her introduction she gave a detailed account of the bureaucratisation and degeneration of the Soviet Union during the 1920's, showing that after Stalin secured power within the party apparatus by 1927 went on to destroy the democratic structures of the working class, like the ban on factory committees 1929. 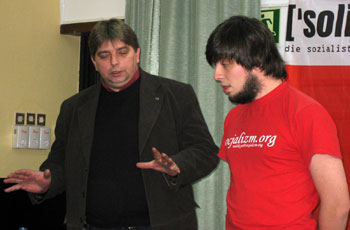 Stalin did not come to power as a continuation of Leninism, but after a second civil war, with frame-up trials and concentration camps, against Leninism.

In the next session Karin Schnetzinger from Der Funke introduced the subject "ABC of Trotskyism" in a humorous spirit where all misconceptions and stereotypes of "Trotskyism" were dealt with. Unfortunately there are some political trends claiming the tradition of Trotskyism, but they really only discredit Trotskyism. We must, thanks to them, be prepared to answer these misconceptions people can have about Trotskyism. But the introduction soon moved on to a more serious note dealing with the history and the origins of Trotskyism and some of the main political pillars of Trotskyism: The Permanent Revolution, The Revolution Betrayed - the analysis of Stalinism - and the Transitional Programme. 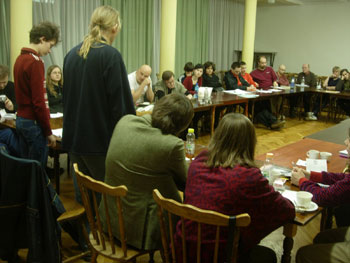 In the fourth session Marie Frederiksen, from Denmark, spoke on building the International Marxist Tendency. She started by drawing the lessons from the early Marxist movement, particularly how Lenin built Bolshevism as a mass force capable of carrying out the Russian Revolution in 1917. She brought the analysis completely up to date, and a lively discussion on the practical problems faced by Marxists in Sweden, Denmark, Germany and Poland took place. We are all confident that the lead-off  and the school as a whole marked out our progress so far and prepared us for an even better event next year.

A special thanks goes to the Miners' Union who helped to set up this weekend school and who donated 200 bottles (!) of beer to the social on Saturday night.

All in all this weekend has broadened our political horizons and re-charged our political batteries. With renewed energy we will make Marxism a factor to count with in 2008.