Details
In Defence of Marxism
07 February 2011 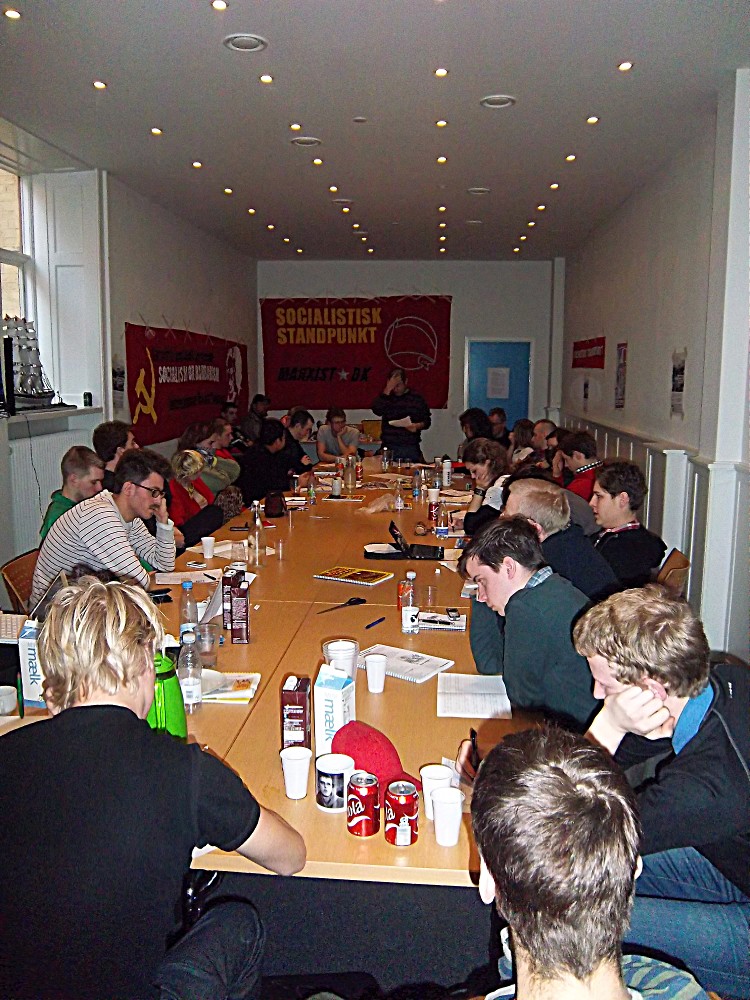 The last weekend of January 40 Marxists from Sweden, Britain and Denmark gathered in Copenhagen for the Northern European Marxist Winter School. Even though it was freezing cold outside, the mood at the school was excellent as news from the revolutionary development in the Arab world kept coming in.

Obviously the Arab revolution was on the agenda. The discussion was lead off by Ali Nooshini and the following discussion showed that all comrades present were very enthused by the marvellous movement of the Arab masses. The Tunisians led the way, and now the Egyptians are following. The revolutionary movement shows that revolution knows no borders. The Arab revolution is an inspiration to workers and youth all over the world. On the Saturday many of those who participated in the Winter School went to a demonstration outside the Egyptian embassy in Copenhagen to show their support for the revolution.

Also on the agenda was the history of the IMT. Martin Oscarsson from Sweden explained the lessons we can learn from our history in his lead off. He focused on the necessity of Marxist theory and education and the need to connect those ideas with the working class, through a clear orientation towards the traditional mass organisations of the workers.

Saturday morning Francesco Merli from London introduced the discussion on European Perspectives. He explained that in all European countries we have entered the age of austerity with deep cuts and attacks on the working class and youth. All over Europe we have seen the awakening of the working class and youth, with the student movement in Britain, the mass movements and strikes in Greece, France and other countries. He pointed out that we are only at the beginning of this new period that is opening up with revolutions and counterrevolutions. The perspective is that of increased tensions between nations, also inside the EU, and between classes. Everywhere sharpened class struggle is on the order of the day.

We then discussed Marxist philosophy, dialectical materialism, led off by Dan Morley from Britain. He stressed that Marxist philosophy is not something we study to sound clever, but because it alone allows us to understand the processes that are taking place below the surface, and therefore prepare ourselves for the developments that lie ahead.

Sunday morning started with a lead off on the process of the degeneration of the Soviet Union led off by Marie Frederiksen, from Denmark. She explained how the advocates of Capital are spreading the slander, helped by learned professors, etc., that the monstrous regime in the USSR under Stalin, was the logical conclusion of Marxism and the strategy of the Bolsheviks under Lenin. But according to her, nothing could be further from the truth. In the revolution in Russia in 1917 the workers and poor peasants rose up, overthrew the brutal Tsarist dictatorship and took power into their own hands. They set up the most democratic organs of power the world has ever seen – the soviets, councils for the direct rule of the workers, peasants and soldiers.

That revolution was only meant to be the spark to ignite the world revolution. But the international revolution was defeated and the Russian revolution therefore was isolated in a backward country. This is what led the degeneration of the revolution.

The last discussion on the agenda was on the topic of the workers parties in Scandinavia. Frederik Ohsten from Denmark gave an overview of the state of the labour movement in Scandinavia and explained that the Scandinavian working class has a strong tradition of being organised. The main party in all these countries is the Social Democracy, but there is also the tradition of the ex-communist parties, the Sosialistisk Venstrepartiet in Norway, the Socialistisk Folkeparti in Denmark and Vänsterpartiet in Sweden. The leaderships of all these parties have moved far to the right. Frederik assured that, as in the rest of the world, the class struggle will also come to the surface in Scandinavia, and will have a profound effect inside the workers’ organisations. It is the task of the Marxists to be with the working class wherever they are and put forward a Socialist Revolutionary alternative to the present reformist leaderships. On this note the school ended with the enthusiastic singing of the Internationale and everyone left eager to build the Marxist forces in the labour movement in their respective countries.