Details
Our Correspondent in Lahore
23 March 2010 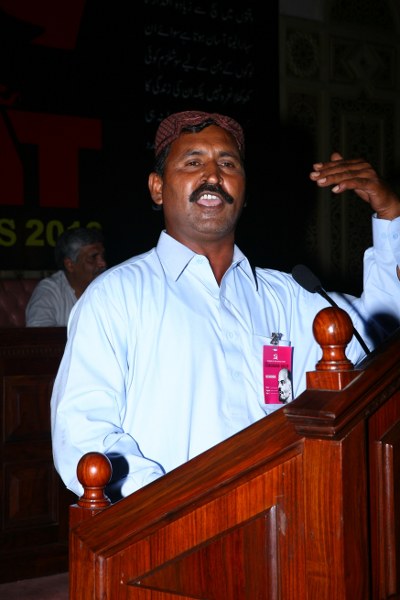 The Second Day of the congress was dedicated to a discussion on the approach of Marxists to the mass organisations and also on the work of building the forces of Marxism in Pakistan. In spite of attacks on the tendency, the comrades have made important gains, and the mood is one of determination to build.

The Second day opened as usual with revolutionary songs and poetry, as the delegates gradually filed into the hall after breakfast was served in a large tent. The task of feeding and accommodating over 2,000 people is, in itself, a colossal task that would tax the resources and ability of organizations even in advanced capitalist countries, let alone one with the terrible poverty and defective infrastructure of Pakistan. It is an eloquent tribute to the tremendous organizational capacity and dedication of the Pakistan Marxists.

Before the start of the session on Marxism and the mass organizations, comrade Yasir Irshad from Kashmir read out the IMT declaration on the Fifth International in English and Urdu, which was greeted warmly by the delegates.

Comrade Lal Khan led off on this important subject. A document on this issue was circulated to all comrades before the congress (as well as other printed documents on World Perspectives, Pakistan Perspectives and Organisation). Lal Khan reminded Congress of the theoretical basis of our movement: the ideas of Marx, Engels, Lenin, Trotsky and comrade Ted Grant. Beginning with the celebrated phrase of the Communist Manifesto, that the Communists do not form a party separate and opposed to other workers’ parties, he traced the history of the efforts of the Marxists to become a mass force. 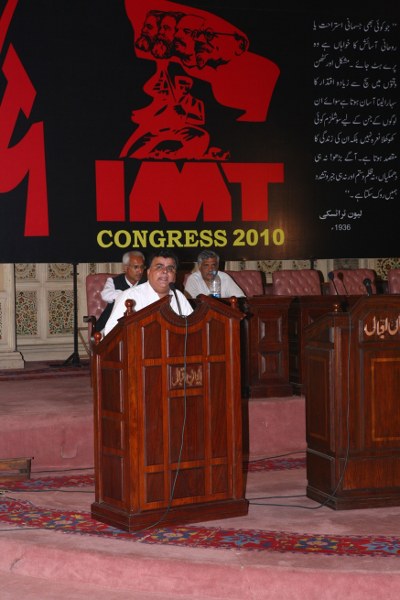 Comrade Riaz Lund speaks on the mass organisations. He explained the complicated situation after the Second World War, when the forces of genuine Marxism were reduced to a small minority; Ted Grant worked out the correct tactics and methods that would firmly link the Marxist tendency to the existing mass organizations of the working class.

He recalled the great successes of the Militant Tendency in Britain, which seriously alarmed the ruling class. This was thrown away by sectarian ultra-left adventurism. But the IMT continues the genuine traditions established by Ted Grant.

“The PPP is not a workers’ party but it has a mass following among the workers and peasants. The original programme of the PPP was socialist and it connected with the masses. There is a tradition that we must take into account. Our perspectives for the PPP were fully vindicated by the events around the return of Benazir Bhutto. Three million people came on the streets to welcome her. This mass movement frightened the ruling class and she was assassinated.

“There was a massive upheaval with revolutionary implications, but Zardari and the right wing PPP leaders suffocated it. Benazir Bhutto was proud of the fact that she was the first leader in South-East Asia to start privatisation. That is how far the leaders have gone in abandoning the original socialist aims of the PPP. Now Zardari and the PPP right-wing leaders are in power and carrying out anti-working class policies, including privatisation. The workers are learning a very hard lesson in the school of Zardari!

“The Marxist tendency has come under attack in Pakistan and internationally by elements that wish to destroy us. But they have failed. We are stronger than ever, because we reflect the real feelings and aspirations of the masses that yesterday voted for the PPP for a change and are now beginning to move into struggle. Our place is with these masses.”

Lal Khan concluded his remarks with a reference to the call for the Fifth International, which was greeted with applause and chanting. A debate then followed.

The first speaker was Haider Chughtai from South Punjab. He said: “All our tactics and methods have one aim: socialist revolution. We must never lose sight of this or we can lose our way. The PPP is in a coalition with all kinds of bourgeois elements. We must have an implacable attitude to Zardari and co.”

The second speaker was Ilyas Khan from Multan who emphasized the correctness of our perspectives for the PPP and made a very sharp criticism of Zardari and the present government. The third speaker was comrade Harish from Sindh who spoke about the history and tactics of the internationals in the past. 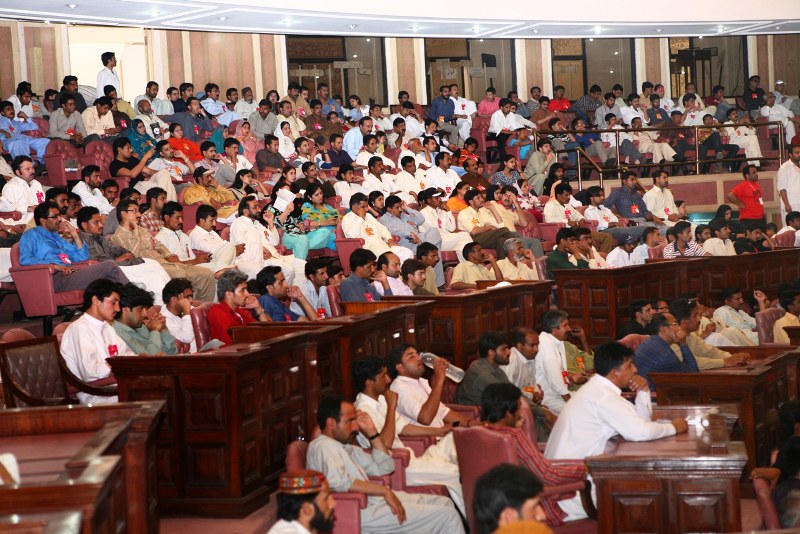 The next speaker was comrade Alan Woods. Alan pointed out that the PPP leaders needed to form a coalition with other parties in order to deflect the criticisms of the PPP rank and file. But Nawaz Sharif, leader of the right-wing Muslim League was too smart to fall into this trap. He left the federal government to do the dirty work while he enjoyed the luxury of being in opposition. The ruling class and the imperialists are obliged to base themselves on Zardari for the time being. However, once a serious movement develops from below they will ditch him and put in a more right-wing government. This will prepare the way for a crisis inside the PPP and the rapid growth of the Marxist Tendency.

Zubair from Karachi followed by comrade Yasir Irshad from Kashmir both spoke on the 5th International.

The next speaker was Riaz Lund, the respected workers’ leader from Karachi. He said that,

“the leadership of the PPP has carried out a historical betrayal. They corrupted their genuine workers by giving them business permits and plots. In the current economic situation reforms have become impossible and only a revolution is the way forward. We must work hard so that another revolution is not wasted and we do not simply remain as spectators. The comrades working in the mass organisations are in very difficult situation and the comrades in internal work give them full support. We must expose the government policy of offering 12% of shares of privatized companies to the workers.”

The session was summed up by Lal Khan. He said that he had received 150 questions on the subject and although he answered some of them, he apologized for not being able to deal with most of them. He emphasised one important point: “The place of the Marxists is to be with the masses, starting with the advanced layers of the workers.”

Comrade Adam Pal then led off on the session on organization building. He explained Lenin’s method of Democratic Centralism and how it is important today to achieve victory. He reported on the Paper and Finances over the last year.

“We are publishing papers in Urdu, English (Asian Marxist Review), Farsi and Sindhi. Also a paper for youth ‘Azam’ is being published by the JKNSF in Kashmir. Last year the organization published a record number of issues of the Urdu paper The Struggle.

The quality of our worker comrades in Karachi is very high. But that of the comrades in neighbouring Baluchistan is of a comparable level. In Baluchistan for the last few years a vicious war has been raging. Here too every day there is sectarian violence, kidnapping and murder. The state agencies are involved in all this. And now the US imperialists are threatening to extend their drone air attacks to Baluchistan also. In these horrific conditions the comrades have done marvellous work and the organization is growing, not just in Quetta, where most of the population is concentrated, but in smaller towns and cities. 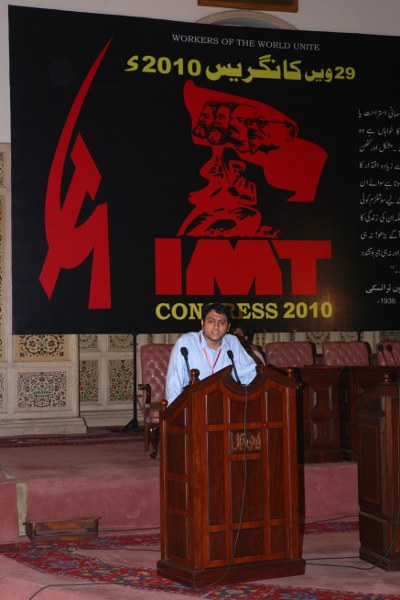 Adam Pal gives the organisation report Comrades in Pukhtoonhua face a particularly difficult situation. Every day there are suicide attacks and dozens of innocent people are killed. Drone attacks, curfews, military operations and check posts are the menaces faced by our comrades all the time. Despite these problems this region has seen one of the highest rates of growth of the Marxist Tendency. Particularly impressive has been the growth of the forces of Marxism in the Tribal area of South Waziristan where a bloody war is raging between the Taliban and the Pakistan Army. Present at the congress were no fewer than 200 comrades from Pukhtoonhua including important workers’ leaders from Peshawar, and 20 comrades from South Waziristan.

There were 76 comrades present from Karachi, including workers from Pakistan Steel, Pakistan Post, Karachi Electric Supply, the Railways as well as students. From Sind (excluding Karachi) there were 166 comrades present. Most impressive of all was the delegation from Kashmir: almost 400 comrades.

In this session there were also reports back from the commissions held the night before. Comrade Sumera reported that 95 woman were present at the congress and announced the target for next year. She emphasized that the building of female Marxist cadres is of utmost importance for the tendency. Comrade Farhad reported back from the youth commission. He announced the targets of the Unemployed Youth Movement BNT conventions for the next year. Comrade Qamar reported back on the activities and plans of the Trade Union Work and the participation of the comrades in the PTUDC.

After the session on organisation, voting took place on a number of questions: World Perspectives, Pakistan Perspectives, Strategy on Mass Work, the Organization report (including targets) and the election of a new Central Committee. Delegates also voted on the Fifth International. The voting was unanimous on all these questions.

Comrade Zafarullah who chaired the final session than called upon comrade Alan Woods to deliver the final remarks. Alan said that when he joined this organization 50 years ago we had only 30 comrades in the entire world. But we had correct ideas. We built the largest Trotskyist Organization after the left opposition in Russia. 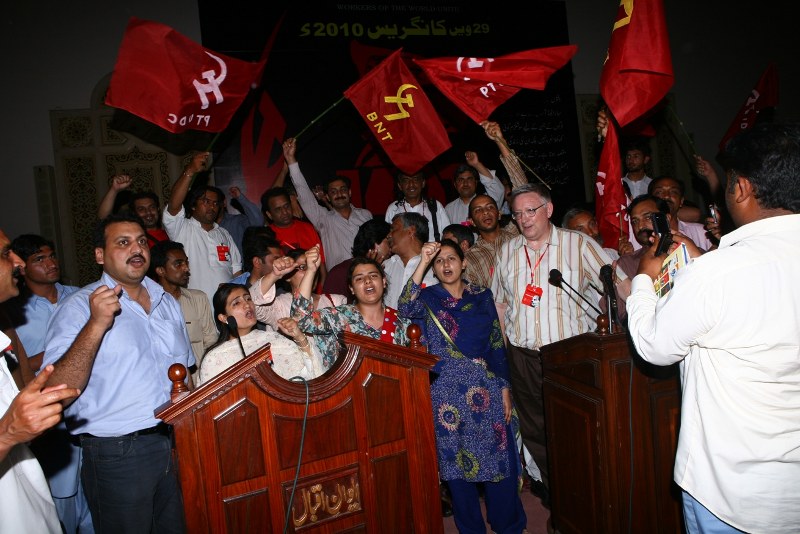 Singing of the Internationale The entire history of Marxist internationals is a history of constant battles. Our successes are being noticed by our friends and enemies. And our enemies have launched furious attacks on us. Comrade Woods ridiculed the lying propaganda that the IMT was “falling to bits”. He pointed out that these attacks originated in Pakistan where the PPP bureaucracy and the Pakistan state have tried to sabotage the section. He explained how the attacks on the IMT over the last year have failed, as this impressive congress testifies.

“We have broken with sectarian ultra-lefts and opportunist elements. Has this weakened us? Far from it! If we are serious about our perspectives for an upsurge of the class struggle and our role in these events, we must clean our own house first.

“If we are serious about our perspectives for socialist revolution, and our role in the class struggle, we must ensure that our organization is in a fit state to meet the colossal challenges that will present themselves in the next months and years. We must put our house in order nationally and internationally. As they say in the British navy: clear the decks for action!’”

Comrade Alan’s speech was greeted by a standing ovation, followed by the enthusiastic singing of the Internationale. After this the delegates and visitors carrying red flags staged a rally in front of the Punjab Assembly on Mall Road shouting slogans against privatisation and for socialism.

The Congress had opened with great expectations and closed with a mood of tremendous confidence and enthusiasm. This was shown by a record amount of money collected both before and during the congress amounting to an impressive total of Rs 12,22768 (Euro 10,726), a huge sum, considering the level of wages in Pakistan. It is the clearest expression of the will to overcome all obstacles placed in the path of the Pakistan comrades, and all supporters and sympathisers of the IMT should be proud of the achievements in this key country on the South Asian subcontinent.