In the tradition of the Pakistani Marxists commemoration meetings to celebrate the anniversary of the Russian Revolution were held in different parts of the country. Here we provide a report on the meeting in Rawalpindi. 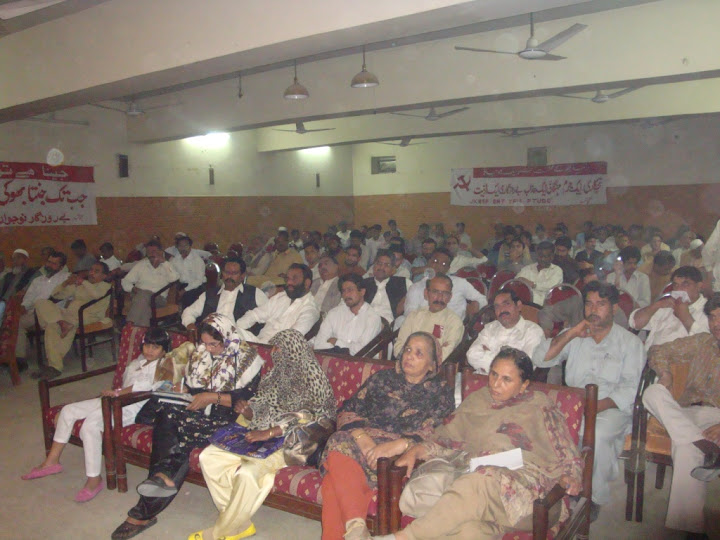 On 5th November 2009 the Pakistan Trade Union Defence Campaign (PTUDC) organized a ceremony to mark the 92nd anniversary of the Bolshevik Revolution of 1917 in the Rawalpindi-Islamabad Press Club. The title of the programme was “Bolshevik Revolution The road to emancipation”.

Comrade Zafar started the programme by explaining the significance of the Bolshevik Revolution. In his address Comrade Parvez Malik from the Attock PTUDC explained the importance of the role of Lenin and Trotsky in the revolution. The greatest achievement of the Bolshevik revolution was that it changed the property relations prevalent in Russian society. He said that the only way to solve the problems and miseries of society is through a Socialist Revolution.

Nazar Gondal, Federal Minister for food and agriculture, said in his speech that it is a matter of great pride for him to participate in such a programme and he learns a lot from programmes like these. He said that he will keep on participating in such programmes in the future as well. He said that the economic and social injustices produced by capitalism have opened the way towards a Socialist Revolution. He appreciated the revolutionary spirit of the comrades present in the hall. He explained that we must work hard to bring the PPP back to its founding manifesto which clearly stated that the ultimate objective of the party was the establishment of a classless society. He was amazed by the energy of Comrade Parvez Malik and said if the older comrades have such a revolutionary passion we can well imagine the vigour among the youth. He said that there is a contradiction between wealth and wisdom and only the working class and poor masses have the power to change society. He said that he is eagerly waiting for the annual Congress 2010 of The Struggle. He said that there is not much time left before the inevitable revolution and soon the day will come when the PPP will be pushed back to its basic manifesto of socialism and he would be a among those supporting the revolution.

Comrade Abid from PLF explained to meeting the meaning of the revolutionary historical terminology and of bolshevism. He outlined the economic and social miseries in society and said that a Socialist society is the only way to get rid of these agonies. Zahoor Awan from the Pakistan Workers’ Federation talked about the criminal privatization of Pakistan Steel and PTCL and explained the heinous role of the bourgeois media when it comes to the problems and issues of the working class. He said that Privatization is a crime, Price Hike is disastrous and unemployment is a curse.

After this Samina Tabassum from the Nursing Staff of Holy Family Hospital recited a poem of hers describing the pains and agonies suffered by the working class under the yoke of capitalism. Comrade Arman from the JKNSF said that we don’t celebrate this day only to commemorate the Bolshevik Revolution but also to spread the message of revolution and reiterate our determination and commitment with the revolution to come.

Comrade Ijaz Khan from the PTCL (Pakistan Telecommunications Limited) talked about the 53-day long PTCL strike and saluted the workers. He said that workers have started to realize their power and soon there will be a system in which there would be no exploitation of the working class. After him Comrade Ilyas Khan highlighted the role of Lenin and Trotsky’s revolutionary leadership in his passionate speech. He explained that the collapse of the Soviet Union was a failure of Stalinism, not that of Socialism. He expressed his disgust at the mass politics of non-issues and said that working class movement is gaining momentum and its ultimate goal is a socialist revolution.

The president of the programme Chaudery Yasin explained that the role of the traditional trade union leaders had become a tool in the hands of the ruling class and this has divided the working class and its power. The ruling class always tries to divide the workers on the basis of religion, race, and nationality. He explained how his union won the referendum when all the political parties in government and opposition were against him and used violence during the polling in an attempt to affect the outcome of the referendum in their favour. He said he won because he addressed the issues and problems of the working class.

Comrade Lal Khan was greeted on the podium with passionate revolutionary slogans of “Inqalab Inqalab, Socialist Inqalab”. In his special address Comrade Lal Khan explained the historical development of society and the revolutions that have taken place in human history. He said that socialist revolution is the most difficult one because for the first time power will be transferred from a minority to majority. He said that a socialist revolution is not impossible and in 1917 the Russian working class under the leadership of the Bolshevik Party proved it. He explained that in the Bolshevik Revolution only 9 people died when the Bolsheviks took power.

He went on to explain the subjugation of the Pakistani ruling class to the Americans and the weakness of American imperialism when 44% of the population in USA is dependent on charity food coupons. He said that a worker in USA would have to work for 1055 years to get the same salary as his CEO. He said that 1968-69 in Pakistan was an incomplete revolution and today it is upon us to pay the debt of history, build in the traditions of the Bolshevik Party and lay the basis for a socialist transformation of society. The programme ended with the singing of the Workers’ Internationale.


Made with Slideshow Embed Tool