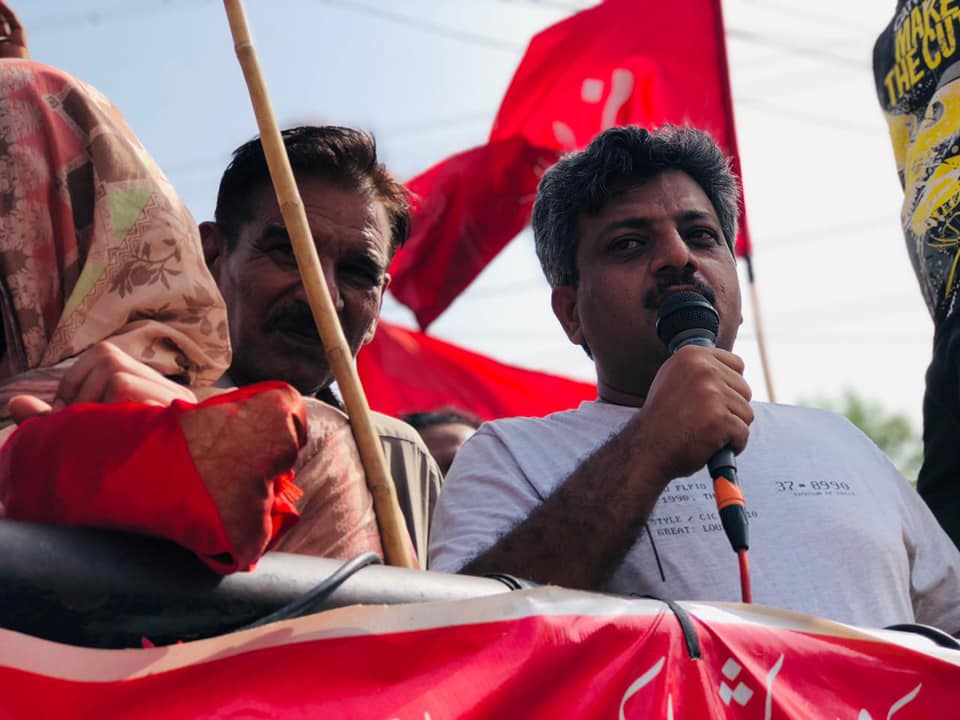 On 28 August a huge protest rally of more than a thousand factory workers from Korangi and Landhi industrial areas of Karachi was held under the banner of the Workers' Solidarity Committee. The main demands of the rally were the implementation of a Rs. 25,000 per month minimum wage, as announced by the Sindh Government, the elimination of contractual labour, and the implementation of industrial safety laws. More than this, however, the rally of the Workers’ Solidarity Committee – formed by a liaison between the Red Workers Front (RWF) and various active trade unions in the industrial areas – has as its long-term goal the forging of class unity among workers to further the struggle against capitalism.

This moment will be recorded in the history of the labour movement of the country – and particularly that of Karachi – in letters of gold. After decades of stagnation, a large number of workers from Landhi and Korangi industrial areas overcame all sorts of prejudices imposed on them by the ruling classes – religious, sect, caste, language and ethnic – and stood shoulder to shoulder to convey a clear message to the ruling classes and the state machinery: that they are not prepared to tolerate any more abuse and oppression.

The plight of the industrial workers in Pakistan, which forms the background to this outstanding display of courage and class unity, is well known to everybody. But in the past one and a half years, the capitalists have taken full advantage of the Covid-19 pandemic to escalate their onslaught on the workers, leading to severe exploitation and deprivation. Almost the entire workforce of these prison-like industrial areas is hired on daily wages through short-term labour contractors. Very few workers remain with permanent employment. Forced retrenchments have become a daily routine. Pakistan’s labour laws heavily favour factory owners, yet even these few lame laws and regulations are left unimplemented. Workers are left reeling under an oppressive regime of contracted labour and outsourcing. Meanwhile, ‘labour NGOs’ and yellow unions have mushroomed, acting as a brake on the development of the labour movement. The combined effect of all these factors has been to breed an atmosphere of apathy and alienation among the workers.

It was in these testing and ruthless circumstances that comrades of RWF Karachi carried on the task of arming the advanced workers with revolutionary ideas. Through persistent effort, they have been able to establish firm contacts with a few of the remaining active trade unions – in particular, the General Tyres Workers’ Union of the Landhi and Korangi industrial areas. The role of the monthly newspaper, Worker Nama, was pivotal in establishing these relations. 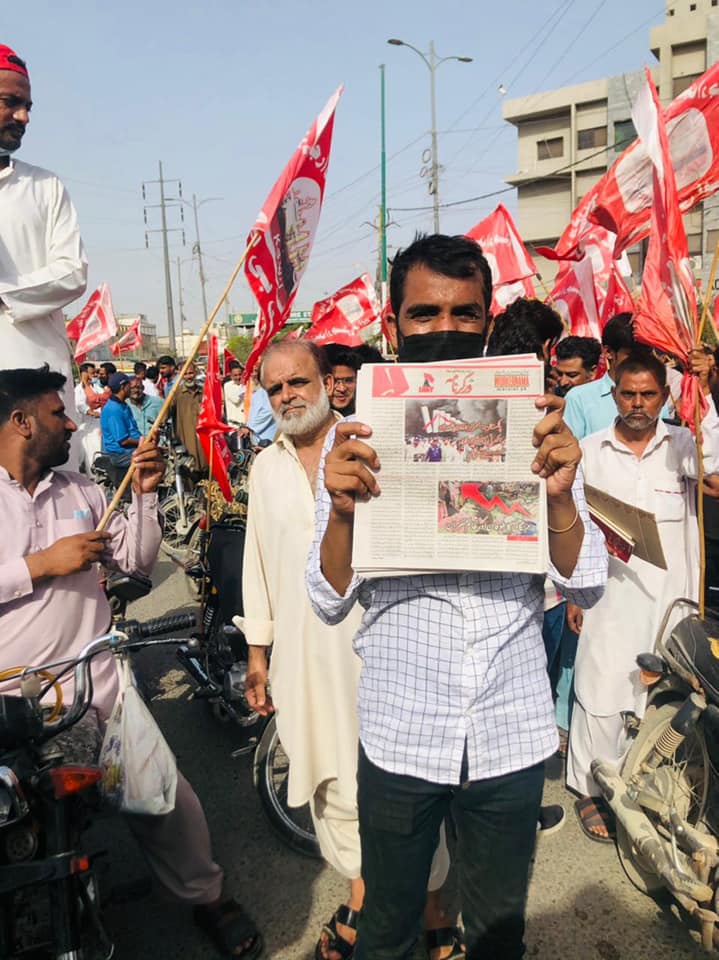 The Marxist newspaper, Worker Nama, played an important role in establishing contacts between the RWF and trade unions that remain active in the industrial areas of Karachi / Image: RWF

In these circumstances, feeling the pressure of growing resentment among the workers, the Sindh government reluctantly raised the minimum wage to Rs. 25,000, although no serious measures have yet been taken to implement this legislation. Whilst this sum is peanuts in comparison with the rapidly rising levels of inflation that have been experienced in the past few years, nonetheless, this halfhearted move by the government was welcomed by the workers. The owners, however, are completely unwilling to grant even this meagre relief to the workers and have blatantly refused to implement the minimum wage. This detonated a wave of anger and resentment among the workers. It was in these circumstances that Aziz Khan, the president of the General Tyres Workers’ Union, displayed political courage in deciding to launch a protest movement for the implementation of the minimum wage, contacting members of RWF Karachi to discuss building such a movement.

On the invitation of the RWF and the General Tyres Union, a meeting was subsequently held on 10 August in Landhi, which drew the attendance of all the active trade unions in the industrial area. A decision was taken to hold a massive protest rally and a Workers’ Solidarity Committee was formed to organise the action. Soon thereafter, workers and active union leaders from all the previously mentioned industries joined the committee. Alongside Aziz Khan, RWF Karachi members played a leading role in the committee, the committee coordinator being a member of the RWF.

The committee next met at Murtaza Chourangi, and RWF Karachi was given responsibility for drawing up the leaflet and banners for the rally. Another meeting of the committee was held in the RWF Karachi offices on 17 August, and from the very next day, a massive leafleting campaign was launched in Landhi, Korangi and Port Qasim industrials areas. This campaign was very warmly received by the workers, further energising the unions that were already participating in the campaign.

The final meeting regarding the arrangements for the rally was held at Hospital Chourangi in Landhi, which saw more unions participate, such as those representing industries like Shabbir Tiles. The committee further decided that it would convene a joint protest of representatives of all of the unions in front of the gates of Atlas Honda to protest Honda’s anti-worker policies and repression in advance of the mass rally. A large number of workers from nearby factories also joined that protest, which gave a further boost of morale in advance of the rally. 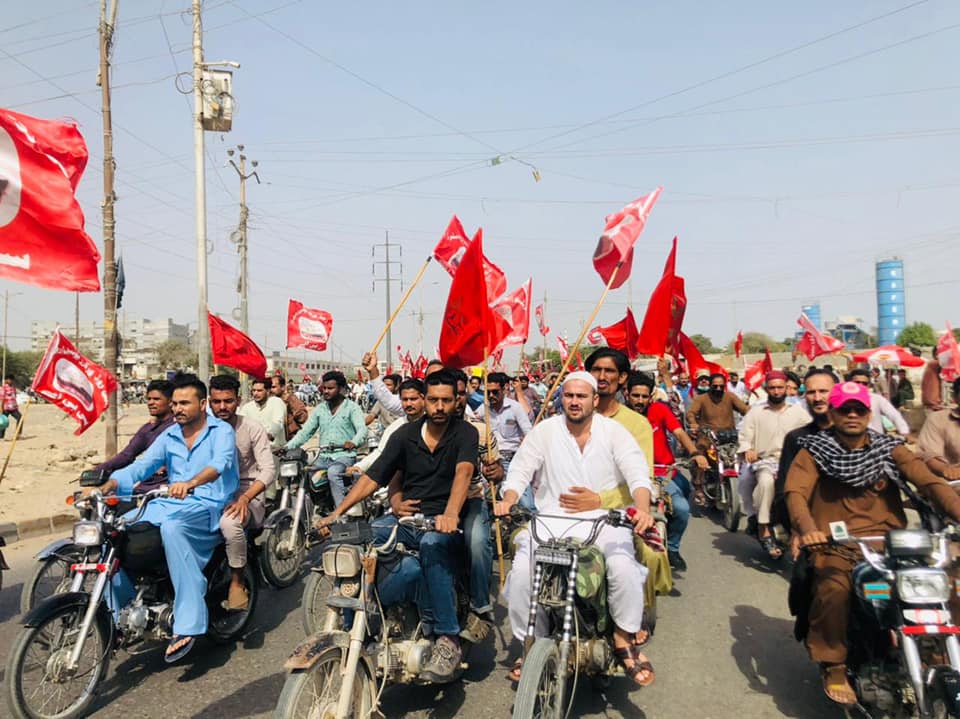 The mass rally of workers from across Karachi on 28 August began with a large motorcade of hundreds of workers on motorcycles / Image: RWF

On 27 August, a mobilisation campaign was conducted in the industrial areas using a mini-truck fitted with a loudspeaker. On the same day, a fire broke out at a chemical factory located in Mehran Town, Korangi in which 21 workers lost their lives. The mobilisation campaign of the committee was immediately directed towards this factory, where RWF comrades and other members of the committee gave fiery speeches, chanted radical slogans and demanded that the owners of the factory face immediate prosecution for their criminal negligence of workers’ safety. This accident further fueled the already simmering hatred of the workers, which would express itself in the form of massive participation in the rally the following day.

One day before the rally, the city administration, the intelligence agencies and the police began systemic harassing the organisers in an attempt to pressure them into canceling the event, threatening them with dire consequences should they fail to do so. The factory owners had begun to panic due to the radical campaign of the Workers’ Solidarity Committee. Moreover, they knew very well that instead of yellow unions, the leadership of the rally was in the hands of the courageous General Tyres Workers’ Union leaders, and the Red Workers Front who are armed with the revolutionary ideas of Marxism. Not only were repression and continuous harassment used, but scores of yellow union leaders and labour NGO activists were unleashed against the rally organizers – especially the RWF – in order to poison the atmosphere. But the exemplary courage and determination of the workers prevailed and won the day.

On 28 August, the rally set off from Hospital Chorangi at 2.30pm. Hundreds of workers riding motorcycles joined the rally led by General Tyres Workers’ Union president, Aziz Khan. A large delegation of RWF and PYA Karachi members joined the rally near Manzil Pump at the National Highway with their red banners, carrying the hammer and sickle symbol aloft. The stage of the rally was managed by comrades Anam Khan and Safdar Jabar of RWF Karachi, and Altaf Sheikhu from General Tyres. Central leader of RWF, comrade Paras Jan, and Aziz Khan from General Tyres were also present at the stage and addressed the workers during the intervals to raise their spirits. 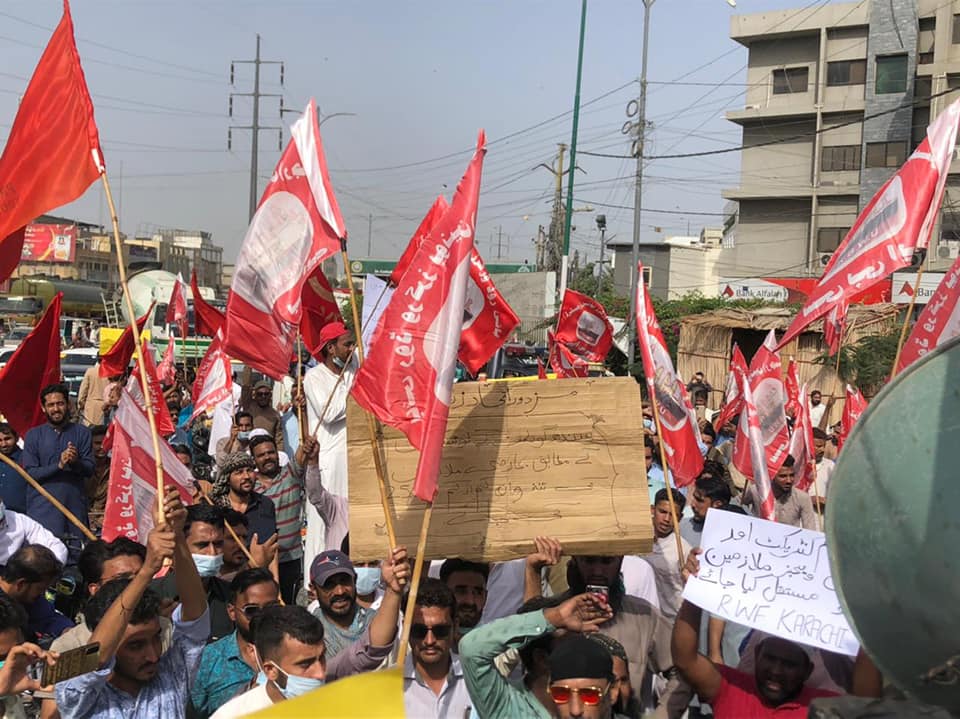 The rally in Karachi took place despite the threats from police and intelligence services, and the attempts of yellow unions and labour NGOs to poison the atmosphere. The workers overcame all these attempts at sabotage, raising revolutionary slogans in an impressive display of class unity / Image: RWF

A heavy contingent of police was deployed at Bilal Chorangi, where they attempted to disperse the rally. However, the workers – chanting revolutionary slogans – passed straight through the contingent and on to the rally to its culminating point at Godam Chorangi Korangi industrial area, taking the form of a huge protest demonstration in front of the Korangi Association of Trade and Industries building. The radical slogans of the workers echoed through the walls of this capitalist retreat. Revolutionary slogans raised by comrades of PYA Karachi, especially comrade Ameer Yaqoob, were very well received by the workers. The demonstration received a further boost when it received the representatives of 400 workers of a denim factory who were facing forced retrenchment.

Addressing the rally, comrade Paras Jan from the RWF said that the owners are so blinded by their lust for profits that they have refused to provide even the meagrest relief for the workers in refusing to implement the minimum wage. He denounced the criminal negligence of the owners, the labour department and the government who were responsible for the deaths of 21 workers in the factory fire a day earlier, and he demanded the immediate implementation of industrial safety laws. He explained that our struggle would not stop until the revolutionary overthrow of capitalism and the establishment of a classless society through a socialist planned economy. In a fiery speech, Safdar Jabar from RWF Karachi highlighted the issues regarding the provisioning of social security, overtime payments and old-age benefits. Comrade Anam Khan from RWF Karachi highlighted the issues faced by women workers, and stressed the need to forge class unity among men and women workers for a revolutionary struggle against capitalism.

In his address to the rally, Aziz Khan, president of the General Tyres Workers’ Union, warned the bosses that if the legitimate demands of the workers were not met, then the protest movement would be expanded to all the industrial areas of Karachi. Adil Khan from Adam Jee Engineering stressed the need for class unity among the workers for a successful outcome of the struggle. Moreover, he demanded that the government raise the minimum wage further, as the current raise is in fact nothing compared to the level of inflation. Zia Bhai, president of IIL General Union, also addressed the rally.

The last speech of the rally was made by Aziz Khan as the president of the Workers’ Solidarity Committee. In his closing address, he warned the factory owners and yellow trade unions, denouncing the industrial areas as a prisonhouse for the workers. He laid out future plans for further actions by the solidarity committee should the owners persist in refusing to raise the minimum wage. Finally, a minute’s silence was observed in honour of the workers who had lost their lives in the factory fire the day before.

Throughout the rally, workers repeatedly chanted radical slogans against capitalism and the bosses, vowing to carry out a collective struggle against any injustice inflicted upon them.

The rally’s last stop was at Opel Industries, where the owners recently brought a case involving false criminal charges against its workers who have also faced retrenchment. Highly charged slogans were raised by the participants against the factory administration and the owners were warned to expect collective action by the workers against this injustice. In the end, the Workers’ Solidarity Committee and RWF Karachi thanked the rally’s participants and vowed to continue the struggle until the complete emancipation of the working class.