On Sunday, July 6, a very successful Kashmir regional congress of "The Struggle" ‑ the International Marxist Tendency in Pakistan ‑ was held at Rawalakot, in the Poonch district of "Azad Kashmir". Over a thousand delegates, members and close contacts attended the congress. 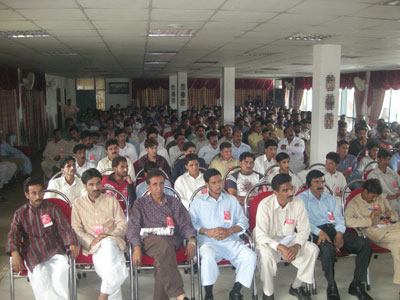 On Sunday, July 6, the Kashmir regional congress of "The Struggle" ‑ the International Marxist Tendency in Pakistan ‑ was held at Rawalakot, in the Poonch district of "Azad Kashmir". Over a thousand delegates, members and close contacts attended the congress.

From a logistical point of view it was one of the most difficult congresses to attend. It was raining heavily and that always causes landslides that block the roads, which are always in a terrible condition. Apart from that, the comrades bore the heavy rain, and a large number of comrades had to make their way over the muddy tracks, walking several kilometres and coming from the cities, towns and villages of every district in Pakistani-controlled Kashmir. Another problem was the extreme poverty in which the majority of the young comrades are forced to live. Several could not make it to the congress, as they had no money for the bus fares to reach the venue and pay the congress fee.

Comrades with red flags on vehicles and motorcycles chanting revolutionary slogans kept on arriving throughout the night. By 10.00 in the morning 907 comrades had registered and got credentials to attend the congress. More comrades kept on coming in from far-flung areas of this difficult terrain in the foothills of Himalayas.

The congress was introduced by comrade Adil Khan, the chairman of the JKNSF (Jammu Kashmir National Student Federation), which is the largest student organization in Kashmir. It has been the traditional left-wing organisation of the Kashmiri students and youth. The congress opened with a revolutionary poem that was lyrically recited by the firebrand comrade Amjad Shehswar, which enthused the whole congress.

The first session on "The world situation and regional perspectives" was chaired by comrade Ajmal and the opening speech was given by comrade Lal Khan, who came from Lahore as the main speaker at this congress. He gave a detailed analysis of the world economy, the reasons for the oil crisis, to the situation of wars and crisis of imperialism, the present bleak perspectives for the world economy and the reasons for the vicious attacks being launched against the toiling masses by the newly installed "democratic" PPP-led coalition government in Pakistan.

He explained how the lightning movement of the masses after the assassination of Benazir Bhutto was betrayed and killed off by the right-wing leadership of the PPP. He explained how, due to the aggravating crisis of Pakistani capitalism, in its first hundred days this right-wing coalition government had raised prices by 45%, which is a record even for Pakistan. He exposed the hypocrisy of the Pakistani ruling classes who allegedly "support" the liberation of Kashmir while the masses living under their control have been pushed into agonizing destitution and misery. 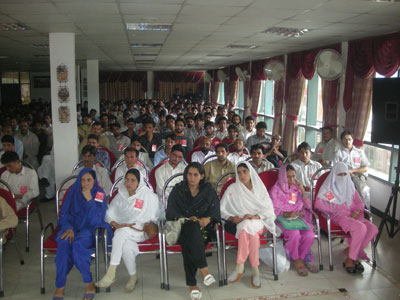 Lal Khan explained in detail how the Pakistani and Indian ruling classes have used and abused the "Kashmir question" for their own domestic consumption and wrought a painful suffering on the Kashmiri working classes. All the different bourgeois political set-ups have failed to deliver in Pakistan and he explained how it was becoming more and more clear in the consciousness of the masses that the only way out from this horror is socialist revolution.

All the comrades who intervened in the discussion revealed in their speeches a high political level, in-depth Marxist analysis and perspectives and were full of revolutionary fervour. The first speaker in the discussion was comrade Shujaat Kazmi, a mass leader of the youth and trade unions from Muzafferabad, the capital of Pakistani-controlled Kashmir. He was followed by comrade Shoaib Shaam, whose fiery speeches are famous throughout Kashmir and it is always a joy for the Kashmiri youth to hear him speak. Than came comrade Javed Chaudhry a Marxist leader of the PPP in Kashmir who attacked the pro-capitalist policies of the present regime and called for a socialist revolution as the only solution to the pressing problems of the masses and as the only way of achieving genuine national liberation of Kashmir.

The most spectacular intervention was made by comrade Rehana, a 17 year old female comrade from Khai Gala. Her speech full of revolutionary fervour, and revealing an advanced Marxist understanding of the situation, thrilled the whole congress. There were several other speakers, who one after the other showed that what we have is not just quantitative growth that we have in the Tendency in Kashmir, but also qualitative development from the point of view of the theoretical understanding of Marxism. There were 143 written questions sent from the floor to Comrade Lal Khan to answer during his reply to the congress. Some of these questions were critical queries about our work in the PPP.

The second sessions on organization was chaired by comrade Shahbaz, another young cadre in Kashmir. Comrade S.N. Shorida led off mainly on the political aspects of building the organization. He elaborated on the importance of the congress and explained how the organization had grown from 35 comrades back in 2001 to 572 integrated members now. He said that, "Kashmir is the largest region of the Pakistan section and every success for Marxists is not to swell our heads but is a challenge. The greater the successes the greater will be the challenges." He said that against all odds and most difficult conditions we have moved forward, mainly due to the ideas and methods developed by our International Tendency. We came forward with the ideas of Marxist Internationalism against the prevailing nationalism and tendencies of Islamic fundamentalism. This congress shows that we have defeated these obsolete ideologies. No other political force in Kashmir today can hold a congress of this size, and with this political and organizational level. 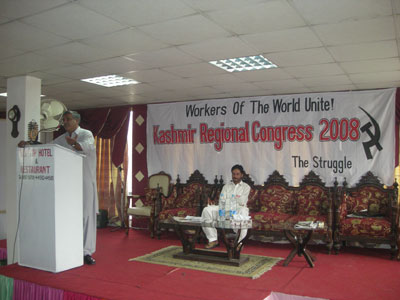 He was followed by a detailed organizational report by comrade Haleem Sajid, a leader of the postal workers in Kashmir. According to the report there were 5 areas, 62 branches, 9 offices and 32 female comrades in the Kashmir organization. He presented a slate of 21 comrades for the Kashmir Regional committee, which was voted on and was unanimously elected.

Comrades Adil Khan and Comrade Yasir Irshad intervened in the discussion and stressed on the need to speed up growth, which was related to the question of cadre building, and to build a solid foundation of the revolutionary forces that will beam the message of the socialist revolution across the whole subcontinent.

This was followed by a finance appeal by Comrade Raja Ijaz who was recently elected as the leader of the Poonch District Bar Association, (the lawyer's association of that district). The total collection raised was Rs.70,000 ($1000) which is a huge sum for the poverty stricken region of Kashmir. After meeting the expenses of the congress Rs.10,000 was sent to the national office.

At the end comrade Lal Khan summed up the congress. He emphasized the fact that the organization in Kashmir is now reaching a critical mass and this would give a tremendous impetus in building the forces of revolutionary Marxism throughout the region. He pointed out that this congress was a turning point not just for Kashmir but also for the whole of the Marxist tendency in Pakistan. It was an inspiration for comrades throughout Pakistan. It was an inspiration for Marxists far beyond the subcontinent.

Lal Khan answered the questions and explained the tasks ahead. He said that now is not the time to look back; we have to move forward. It is a question of life and death from the point of the long-term future of human civilization. He stressed the point that, after the fall of the Berlin Wall, the comrades in Kashmir have proved that a mass base for Marxism can be built. "We are reaching a historical breakthrough and we are almost there. Go forward, a socialist victory can be achieved in our life time. We shall not leave this task for the future generations. We have endured the sufferings and we shall overthrow this rotten capitalist system, the cause of all misery and devastation. No force on earth can stop us. Go Forward!"

After Comrade Lal Khan's speech there was a standing ovation of about five minutes. Then with the female comrades coming up to the platform, the congress closed with the singing of the Internationale.

After the congress a rally was organised in which people from the city joined in to make it a huge protest demonstration against unemployment, price hikes and poverty. There were red flags and banners. Those taking part chanted slogans such as "Long Live Socialist Revolution", "No to National War! No to religious War! Class War! Class War!" and "Revolution! Revolution! Socialist Revolution!" The echo of these slogans, resounding from the Himalayan Mountains will go far and wide.