The annual Pakistani Section National Marxist Youth Summer School was held from 29th to 31st July at Khaigala, a beautiful hill station in Kashmir. In spite of the very long distances, difficult economic situation and sweltering heat, 256 comrades from all over the country participated in the school with great revolutionary spirit making it the largest school in the history of the section. Comrades from Sind and Baluchistan had to travel for more than 3 days to reach the venue. Here we provide a brief report and some pictures. 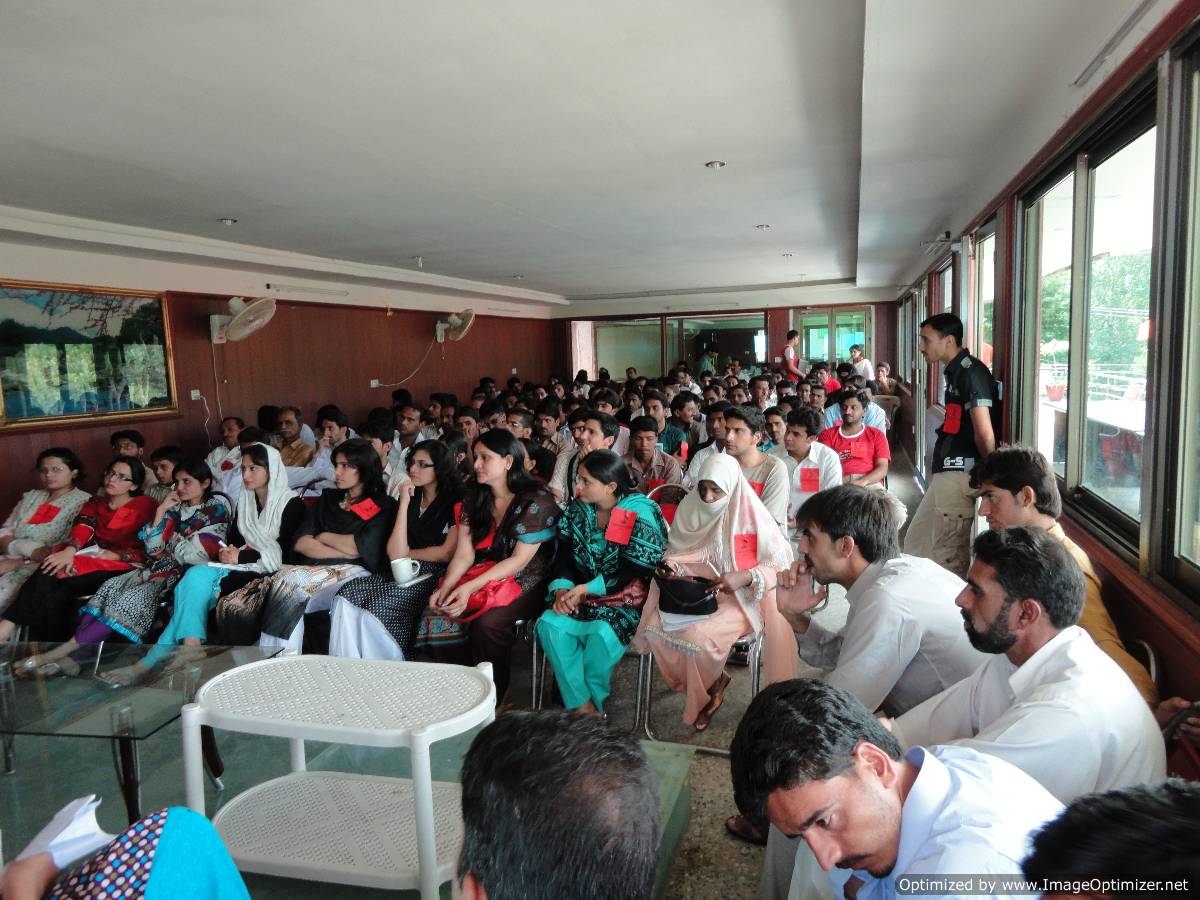 The 2011 Marxist School took place at a very critical moment in history when there is a new wave of awakening in the working class and students all over Middle East, Europe and many other parts of the world, as new revolutionary movements are emerging every day.

Comrade Changez delivered opening remarks along with revolutionary poetry by Faiz Ahmed Faiz, after which the first session started.

The topic of first session was “World & Pakistan Perspectives” and it was chaired by comrade Gulbaz. Comrade Mahbaloos in her detailed lead off explained the economic conditions of advanced capitalist countries as the organic crisis of capitalism which started in 2008 and grows deeper and deeper.

She said that the perspectives of the IMT are proving to be correct as new events are unfolding. As we predicted that after the default of banks and institutions in 2009, 2010 and 2011 proved to be the years of sovereign default. No end of this crisis is to be seen as the bourgeoisie media itself has stopped the baseless propaganda of so called economic recovery. She then analysed the events unfolding everyday in different parts of Europe (Greece in special) that show the sharpening class struggle as the working class and youth resist the austerity cuts inflicted upon them by the state, while the big capitalists get bailout packages and earn more profits.

The perspectives of the Arab revolution were also discussed in detail. She said that real solution to the problems of the people of the Middle East lie in overthrowing the rotten capitalist system and establishing a Socialist Federation of the Middle East. Only the lack of a revolutionary party is hindering the movement to get the fruits of revolutionary socialism. She then analyzed the economic situation of Pakistan and the anti-worker policies of the PPP government. The character of the PPP as a traditional party of the working class in coming days was also discussed.

The lead off was followed by questions raised by the audience, after which comrades from different parts of the country started making their contributions. Comrade Mahbloos summed up the session in the end.

After the lunch break the second session was held, which was chaired by comrade Sheharyar Zauq and the lead off was by comrade Rashid Khalid. The topic of the second session was “Primitive Accumulation”. Comrade Rashid explained the lengthy and complicated topic in a very precise and easy language. He explained the whole epoch of transition from Feudalism to Capitalism and how in that process capital accumulation gave birth to a new class, the bourgeoisie. He also explained different aspects of a dying system, Feudalism, in this case and how the rising bourgeoisie abolished feudalism in different stages.

After the lead off a large number of comrades asked interesting questions. Contributions made the discussion even more comprehensive and interesting. Comrade Yasir from Kashmir region explained in his contribution that transition from Feudalism to Capitalism was not sudden and abrupt, and it must not be analyzed in mechanical way.

Comrade Rashid, while summing up the discussion said that capitalism has been dying for many decades now, and must be replaced with a classless Socialist society as it replaced Feudalism centuries ago. But the transition from Capitalism to Socialism is not same as that of Feudalism to Capitalism, as it would be the first transition in human history when power would be transferred from minority to majority instead of minority to minority. This is only possible through a socialist revolution led by a Bolshevik Party so that humanity may get rid of all this hunger, misery, exploitation and oppression.

In the evening of 29th July many commissions were held in which organizational matters were discussed and performance reports from different regions were collected. After the dinner a video session was organized by audio/video section in which a documentary on revolutionary Urdu poet Faiz Ahmed Faiz was played along with his poetry sung by different singers. A lot of comrades joined and enjoyed the evening.

On the morning of second day (30th July) the third session of the school started with the topic “Alienation”. It was chaired by comrade Vinod and led off by comrade Paras Jan. Comrade Paras Jan in his interesting and detailed lead off explained each and every aspect of Alienation. He said that it is profoundly believed that alienation is a product of private property while the fact is the other way round. Religion, superstitions, crimes, jealousy, selfishness, destructive thinking and many other social problems are by products of the alienation of humanity from itself and the material world. Only in a socialist society where mankind will control its own destiny and product of its labor collectively, can alienation be eliminated. Large numbers of comrades made contributions and answered questions asked by the audience. While summing up comrade Paras said that not only the working class but ruling classes too are prey to social alienation as well and only a classless socialist society can make man a man in true meaning.

In the afternoon the fourth session started after the lunch break. The topic of the fourth session was “History of Russian Revolution” which was chaired by comrade Zaka. Comrade Rehana in her comprehensive lead off explained the events surrounding the takeover by working class in October 1917. She explained the ups and downs of the Russian revolution in great detail from February to October 1917. The role of comrades V. I. Lenin and Leon Trotsky was also discussed. She also explained Lenin’s April Thesis and Trotsky’s role as an active and devoted Bolshevik after 1917. The clash of views within the central committee of the Bolshevik Party was also explained. After the lead off many comrades asked questions about the greatest revolution in human history and the reasons behind its degeneration.

Comrade S.N. Shorida from Kashmir, who translated “Bolshevism: Road to Revolution” by Alan Woods into Urdu, made a very detailed contribution. He explained the astonishing resemblance in the views of Lenin and Trotsky while they were thousands of miles apart. He also explained that even Lenin and Trotsky were not super humans and made mistakes and that we must learn from their experiences so that we may repeat the history at a higher level by overthrowing capitalism and replacing it with a humane socialist society as Bolsheviks did in 1917. Comrade Rehana while summing up answered questions asked by comrades and said that we have no doubt that our tendency is capable of leading a revolutionary movement which is not far in the future. We will establish another USSR throughout the world. 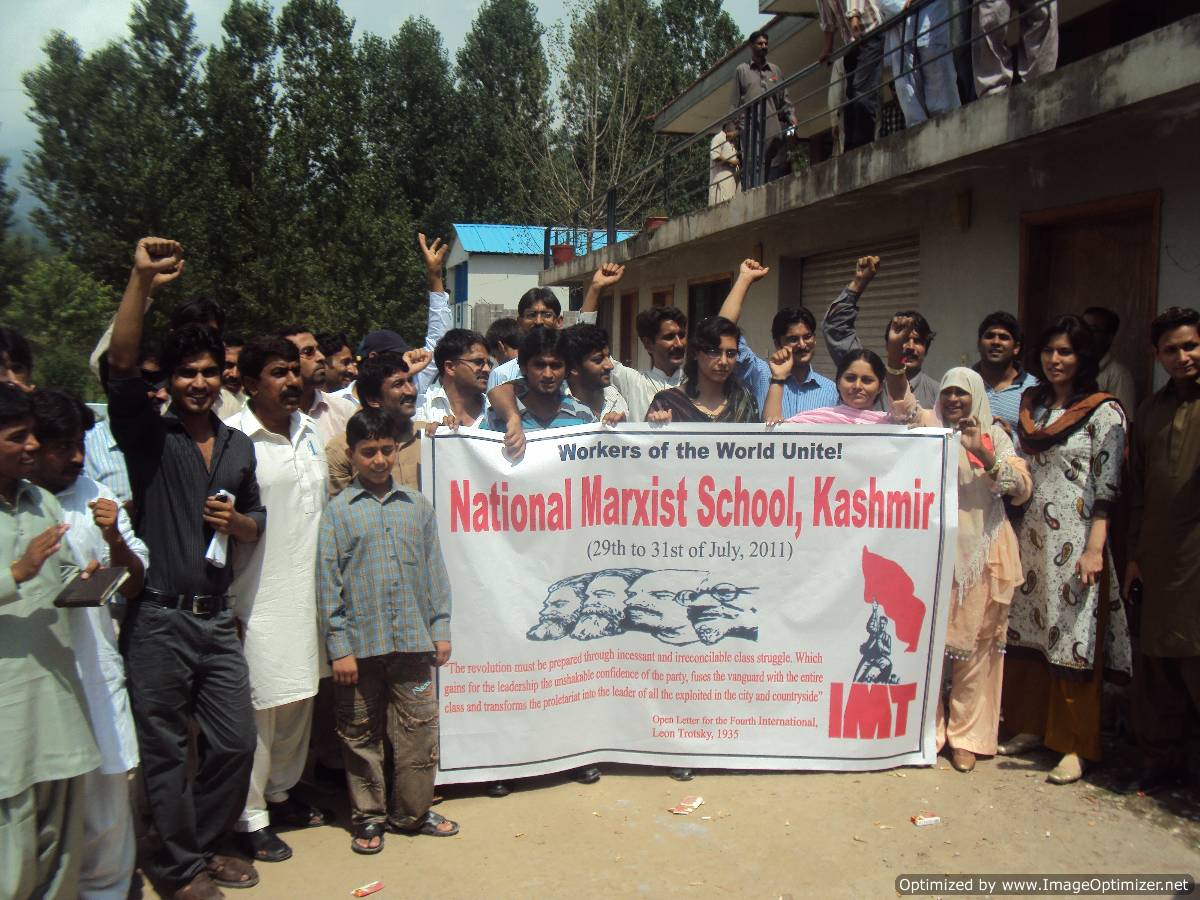 In the evening a meeting of the National Women Bureau was held in order to discuss the work among women which was chaired by comrade Rehana. More than 25 female comrades had come to attend the Marxist School and Women meeting from different parts of the country. Comrade Hina explained the proposed strategy in order to work among working women and young females. Reports were collected from all the regions and new decisions and strategies were planned.

The fifth and last session of the school was held in the morning of 31st July. The topic was “strategy needed for work within youth and students” and it was chaired by comrade Rashid Khalid. Comrade Umer Rasheed from the Agriculture University of Faisalabad explained different possible strategies and methods in order to attract the youth and make them a part of the vanguard. This was followed by the regional reports which included the recent BNT (Unemployed Youth Movement) and PSF (Peoples Student Federation) work all over the country. The successful work of comrades in the Inqlabi Council in the Agriculture University, Faisalabad was discussed as a case study. The possibility of work within Baloch Students Organization and other leftist organizations of youth were also discussed. Discussion on the Convention of the Jammy Kashmir National Students Federation in winter was also finalized.

After that the new Youth National Executive Committee was elected unanimously. The new NEC will be responsible for National youth work for the next year and will meet every 3 months.

Throughout the sessions large numbers of comrades could not contribute due to time constraints and those who contributed were allowed limited time which shows the level of preparation of comrades on an individual scale. Many comrades also sang revolutionary anthems in accordance with the topics and revolutionary poetry sung by comrade Lata was appreciated especially.

Comrade Yasir summed up the school by congratulating the comrades on holding such a marvellous event in the harshest economic and social conditions. He said that during these three days all the comrades acted as one single living organism. Discipline, enthusiasm, energy levels, interest in the discussion and ideological preparations were exemplary.

Collection of school dues was almost 100% with a total sum of collection RS 86300. There was no residence committee present and comrades arranged themselves in rooms voluntarily.

Comrade Yasir also invited the cook Mr. Sadiq to the stage who said with tears in his eyes “I haven’t seen such kind of people in my life. When I was listening to your discussions I was amazed that such beautiful people still exist in the world and I told it at my home.”

In the final remarks comrade Yasir said that the event was not organized but created collectively by all the comrades present like a piece of art. The success of this Marxist school demands from us that the coming winter Marxist school must be on a higher level, both quantitatively and qualitatively.

The School was concluded by singing the Internationale.