The annual Pakistani Section National Marxist Youth School was held from 31st July to 2nd August 2009 at Banjoosa in the mountains of Kashmir. In spite of the very long distances, difficult economic situation and sweltering heat, more than 150 comrades from all over the country participated in the school with a great revolutionary spirit.

Comrades from the Sindh and Baluchistan had to travel for more than 24 hours to reach the venue. Comrades also managed to come from the war hit areas of Pushtoonkhaw where curfew has been imposed by the military. The 2009 National Marxist School took place at a very critical time in the country’s history. On the one hand the capitalist system all over the world is facing its deepest crisis ever and on the other the Pakistani state is making the working class bear the brunt of this downturn along with the military operations in many parts of the country. 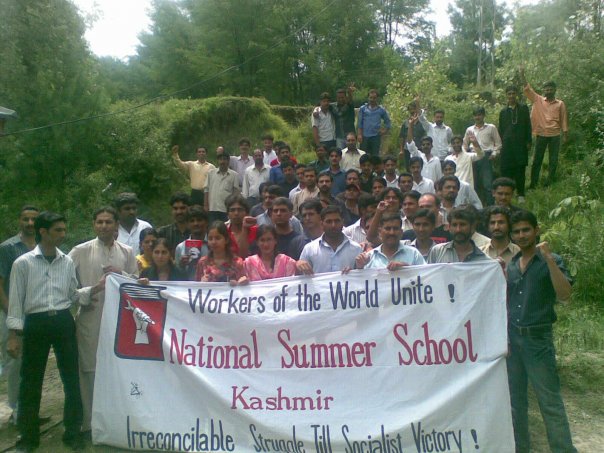 The first session was on World Perspectives. In the lead-off, Comrade Nisar Saba from Baluchistan explained the global crisis of capitalism and its effects on the working class all over the world. He explained the revolutionary situation in Iran and the events taking place in Latin America, especially in Honduras and Venezuela. Comrade Zaka discussed Bangladesh perspectives as he had recently visited and had contacts there. One comrade in his contribution spoke about the historical bankruptcy of social democracy and the reformists. He also spoke about their recent electoral defeats in Europe. Comrade Adam Pal explained the situation in the region and the defeat of Stalinism and guerrillaism in Nepal and Sri Lanka. Comrade Zuhaib Butt explained the current world economic crisis from a Marxist point of view. In the summing up, comrade Nisar said that IMT is the only force in the world that has the correct ideology, perspectives and strategy to lead the world socialist revolution which is the only way forward for humanity the world over.

The agenda for the second session was Marxist Economics. Comrade R.B. Chandio from Karachi chaired the session and Comrade Zohaib Butt gave the lead-off in which he explained the fundamentals of the Marxist analysis of the economy i.e. surplus value, wage labour and capital, and value, price and profit. In his contribution comrade Adam Pal explained the exploitation of the workers. Comrade Umer, Asad, Adam, Yasir Irshad and many other comrades took part in the discussion. In the summing up comrade Zohaib said that capitalism will keep on facing further crises like the present one and the only way to stop them is to replace capitalism with a socialist planned economy.

On the second day of the school comrade Shehryar Zauq chaired the third session on Pakistan Perspectives. In the lead-off it was discussed how the Pakistani state was infected with crisis from the very first day and since then it has only intensified. The worsening economic conditions in Pakistan were discussed in detail and also the intervention that the Pakistani section has made in many working class and youth movements. Comrades from every part of Pakistan took part in the discussion and explained the situation in their regions. Comrade Adam summed up the session by explaining the recent achievements that comrades have made all over the country especially in the war zone of Pushtoonkhaw. He said that correct Marxist ideology has given us the ability to build a force that can bring about a socialist revolution and the Marxist school was a very important milestone in that journey.

The fourth session was chaired by Comrade Sajid Ayub from Puhtoonkhaw and was on Dialectical Materialism. Comrade Ijaz Bhagiyo from the Sindh explained in detail the basic principles and the laws of this philosophy. Comrade Changaiz explained the historical development of Dialectical Materialism in his contribution. Numerous comrades contributed to enrich the discussion which was summed up by Comrade Ijaz.

On the third and final day of the school the last session was chaired by Zohaib Butt. Comrade Amjad Shahsawar from Kashmir led-off on the strategy needed for work with youth and students. This was followed by the regional reports which included the recent BNT (unemployed youth movement) membership camps organized all over the country. The Youth National Executive Committee was also elected unanimously.

Comrade Yasir from the host region (Kashmir) thanked all the comrades for their participation and the revolutionary discipline that they had maintained during the school.

Comrade Zohaib Butt summed up the Marxist School by saying that it had armed the comrades with the necessary Marxist ideas to fight the class war and that after the school we should work with a renewed passion. He said that all who had participated in the school had the ability and the revolutionary will to change society and lead a socialist revolution, which would be the starting point of a world socialist revolution. The School concluded by singing the Internationale.