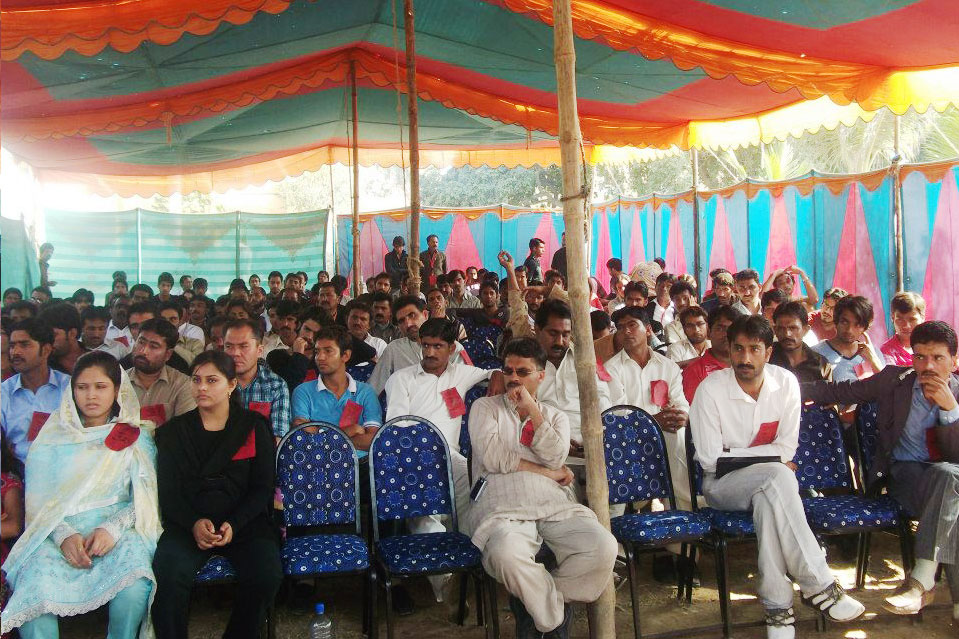 While right-wing demagogues, backed by the bourgeois media, attempt to whip up a reactionary frenzy in Islamabad, the Marxists of The Struggle continue to work systematically to gather their forces, as they work to build a genuine socialist alternative that can offer a way out of the impasse of Pakistani society. Here we provide a report on their Winter School held last month.

Youth is the key to building a revolutionary party. Armed with the ideology of Marxism-Leninism, the youth can gather all their energies and strike a fatal blow against the capitalist system. Lenin explained the importance of ideological education and training: “There can be no revolutionary movement without a revolutionary theory”.

In order to quench their thirst for the ideas of revolutionary socialism and Marxism and to carry forward the task of political education, a larger number of youth from all over the country gathered on the shores of Lake Keenjhar in Thatta for the National Marxist Winter School on 7-10 December. Distances of thousands of kilometers, high fares and problems of unemployment were overcome with revolutionary determination and more than 180 young comrades participated in the school against heavy financial odds.

The school was opened by Comrade Hanif form the host region who welcomed all the participants. The first session on World Perspectives was chaired by comrade Nehal from Quetta and comrade Imran Kamyana led off the discussion. Imran explained that the crisis of capitalism, its origins in the post-war period, the revolutionary movements of youth and the working class and the perspectives for the events in the coming period.

He said that capitalism had brought the productive forces to a stage where it could no longer control them. Over production (“overcapacity”) is not beneficial for humanity, but rather it is causing economic and social crisis, poverty and unemployment. Under these conditions the need for a Marxist-Leninist International becomes more evident. What is required is an International that can uproot capitalism the world over and start moving towards a world socialist system. We have a historic responsibility upon our shoulders and we should maximize our efforts towards that end.

The lead off was followed by questions and contributions. Comrade Khalid from Karachi, Zeeshan from Multan, Awais Qarni from Islamabad, Khalil Babar from Kashmir, Aamir from Kot Addu, Ismat from Faisalabad, Shah Nawaz and comrade Osho from Hyderabad, and Amjad Shah Sawar from Lahore intervened in the discussion. Imran Kamyana answered the questions and summed up the discussion.

The second session on “Marxist Economy” began after the lunch break. Comrade Shehryar Zauq from Jampur chaired the session, while comrade Saeed Khaskheli gave the lead off. He explained the concepts of commodity, value, use value, exchange value, and labour power in detail. He also explained the mechanics and evolution of capitalism and the general laws and contradictions within the system. He said that capitalism was at an impasse and there is no way out. There cannot be a prosperous human society under capitalism. After the questions from the floor Rashid Sheikh from Kashmir, Asif Rashid from Rawalpindi, Imran Kamyana from Lahore and comrade Moeed from Karachi participated in the discussion. Comrade Saeed answered the questions and summed up the session.

The second day, 8th December, began with the third session on “Pakistan Perspectives”. Comrade Mahbloos from Multan was in the chair and comrade Gulbaz led off the discussion. He explained that the global crisis of capitalism is expressing itself in the deterioration of the already stricken Pakistani state and its economy. The so called intellectuals on TV and the intelligentsia fail to understand the real situation and they don’t offer any way forward. The Pakistani state was formed as a result of imperialist division of the subcontinent and it has been in crisis from the very first day. The impotent capitalists have failed miserably to create a modern capitalist state and infrastructure. There is a simmering revolt among the workers and youth which can lead to an explosion at any time. There can be a revolutionary movement in the coming period in Pakistan. A successful intervention by the subjective factor could overthrow the capitalist state and the situation in the whole region could be transformed.

Nehal Khan from Balochistan, Umer from Faisalabad, Majid from Karachi, Daniyal from Kashmir, Asif from Rawalpindi, Sohail from Dadu, comrade Shehzad from Rahim Yar Khan, Rahul and Photo Mal from Hyderabad,  Malik from Sawat and Shehryar Zauq from Jampur made their contributions to the discussion. The session was summed up by comrade Paras.

After the lunch break the fourth session was on “Germany: From revolution to counterrevolution”. Comrade Majid from Karachi Steel Mills chaired the session and comrade Sartaj gave the lead off. He explained the history of the First World War, the Russian Revolution of 1917 and its impact on the world, the crisis of German capitalism, the mobilisation of the German working class from 1918 to 1923, the betrayal of the traditional party, the SPD, and the class collaborationist policies of the leadership, the formation of the USPD, the formation of the Third International and the German Communist Party, the Stalinist degeneration of the Third International, the rise of Hitler and fascism, the defeat of the German revolution and its lessons.

After the questions comrade Saad Nasir from Kashmir, Saqib from Wah, Javed from Multan, Faras from Karachi and Irtqa from Faisalabad made interventions. Comrade Sartaj summed up the session and answered the questions.

On the third day the last session was on “Strategy and Tactics of the Youth Work”, which was chaired by Rashid Sheikh who is also chairman of the JKNSF [Jammu Kashmir National Students Federation ] and comrade Amjad ShahSawar gave the lead off. Comrades from all regions of Pakistan gave reports of the youth work in their areas and made suggestions for improving the work.

Finally, the school was concluded by an enthusiastic rendering of the Internationale.