The annual National Winter Marxist Youth School of the Pakistani section of the IMT was held from December 3rd to December 5th, 2010 at Hawks Bay, Karachi. In spite of the very long distances and difficult economic situation more than 150 comrades from all over the country participated in the school with great revolutionary spirit. 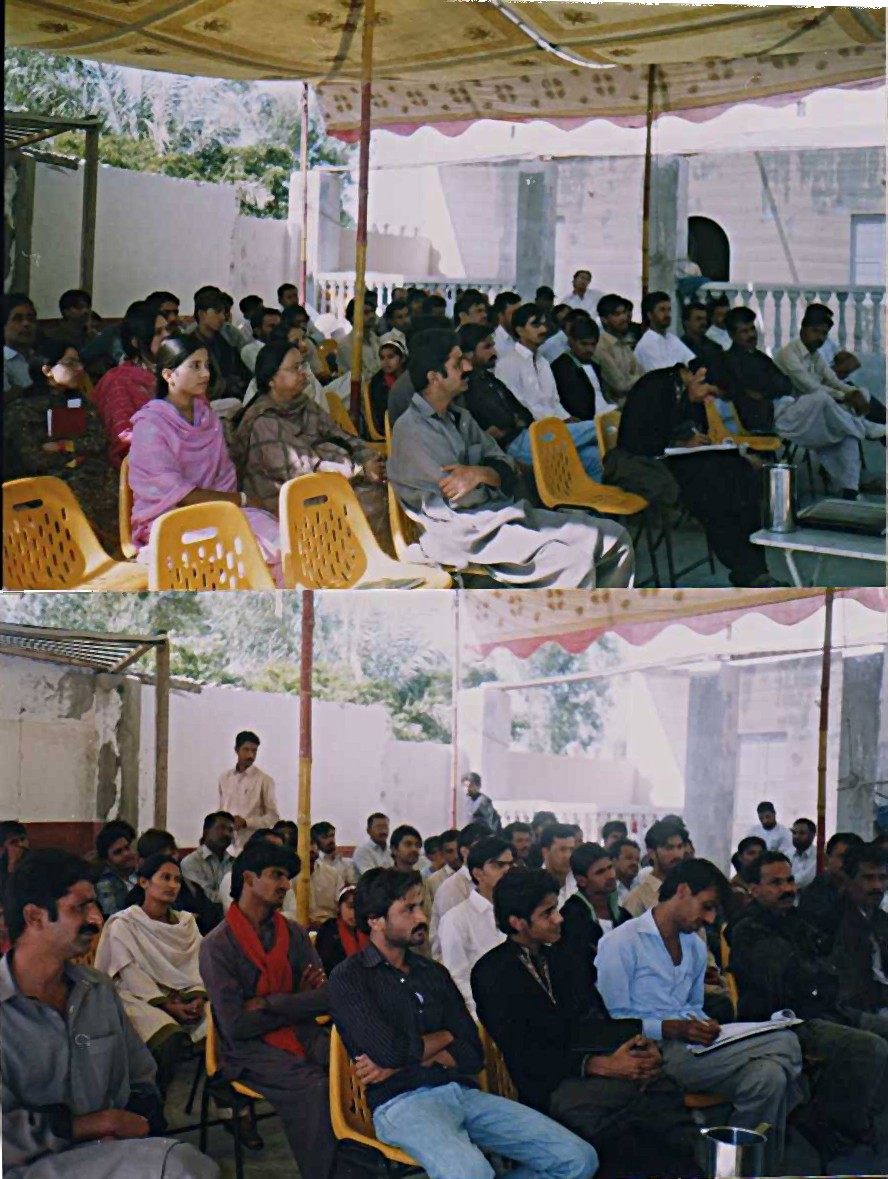 The opening speech was delivered by comrade Zaka in which he explained that the school was being held in an extraordinary epoch and financial cuts are being imposed on the working class all over the world due to the built-in crisis of capitalism. There is a new wave of awakening in the working class and students all over the world as new and new movements are emerging every day.

In the morning of December 3rd the first session was started. The topic of the first session was “World and Pakistan Perspectives” which was chaired by comrade Rehana and led off by comrade Haneef Misrani. Comrade Haneef in his lead off explained how world capitalism is in deep crisis which cannot truly be explained on the basis of bourgeoisie economics and the so-called bourgeois economists all over the world are giving lame excuses and the wrong solutions to the crisis. The capitalist crisis is throwing humanity into destruction, poverty, hunger and low standards of living throughout the world. Even the bourgeois analysts are declaring it the biggest crisis in the history of capitalism.

He then analyzed the economic situation of Pakistan and the anti-worker policies of the PPP government. The lead off was followed by questions raised by the audience, after which comrades from different parts of the country started making their contributions. Comrade Majid from Pakistan Steel Mills, and the comrades Ghaffar, Rashid Khalid and comrade Tanveer from Kashmir, comrades Qarni and Changez from Rawalpindi/Islamabad, comrade Zubair from the BSO Balochistan, comrade Rahul from Haidarabad, comrade Nihal from Quetta, comrade Zubair and comrade Paras from Karachi were among those who contributed. Comrade Haneef Misrani in his summing up concluded that Pakistan may face a food crisis in the near future. The war industry is the most profitable business all over the world and the elites in the Pakistan Military are making a lot of money in the form of commissions through arms deals with western defence firms, but the time is not very far off when the masses all over the world will rise with the same weapons in their hands for a Socialist Revolution.

After the lunch break the second session was held, which was chaired by comrade Sheharyar Zauq and the lead off was by comrade Rashid Khalid. The topic under discussion was “Wage Labour and Capital”. Comrade Rashid in his lead off explained the contradiction between ‘wage labour and capital’ very eloquently. He explained how a surplus is produced through labour power which later becomes capital and how wages are determined in a capitalist economy. 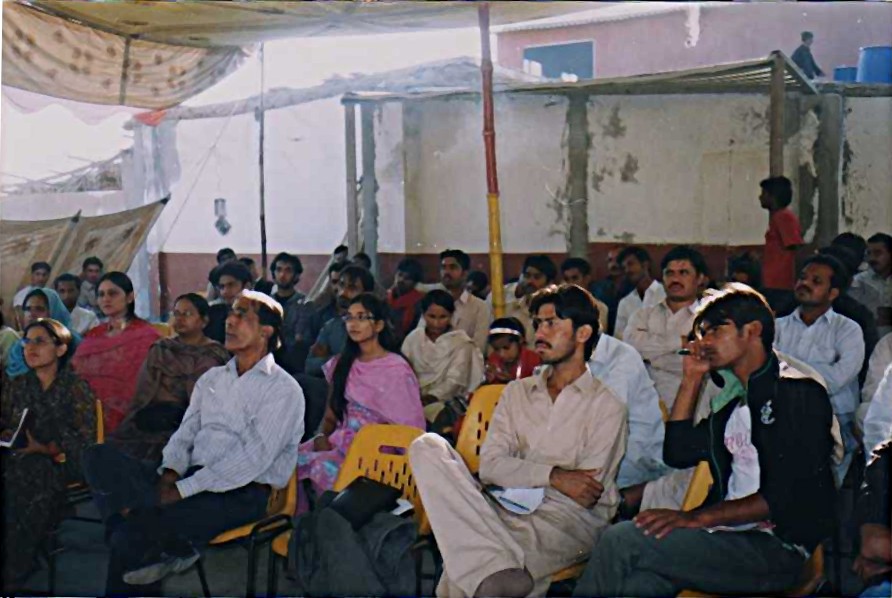 Comrade Rashid summed up the session by concluding that in the capitalist mode of production the motive behind production is profit and this very profit has become a curse for humanity. The need of the hour is a worldwide planned economy in which production would be for the sake of the needs of humanity.

On December 4th the third session was started on the topic “The history of philosophy” and was chaired by comrade Nihal. Comrade Changez in his rich lead off explained that the history of philosophy is as old as the human civilisation itself. He then explained the philosophy of the four fundamental elements (fire, air, water and soil) which dates back to 600 BC. He then explained the different ideas of the famous Greek philosopher Thales. Materialist ideas in Greek Philosophy were also discussed. The dialectical approach of Heraclitus was explained in detail as he was the first Greek philosopher who was convinced that everything is in a constant state of motion. After the dialects of Heraclitus came Democritus who was a fully fledged Materialist.

The struggle of Socrates against individualism was also explained. The teachings of Aristotle, Epicurus, the idealist views of Descartes and Kant were also explained. Hegel’s idealist approach towards dialectics and Feuerbach’s materialism were also important in the history of philosophy.

All these philosophical trends had their impact on Karl Marx and Fredrick Engels who later developed the ideas of Dialectical Materialism which is the basic philosophy of Marxism.

After a detailed lead off by comrade Changez, questions were raised by the audience. A lot of comrades contributed and made the discussion rich and comprehensive. Comrade Aijaz Bhagio , comrade Faiz, and comrade Saeed from Sindh, comrade Rehana and comrade Ghaffar from Kashmir, comrade Gulzar from D.G Khan, comrade Zubair and comrade Paras from Karachi made their contributions. Comrade Changez in his summing up quoted Karl Marx, saying that philosophers have interpreted the world in various ways, the point however is to change it, and true Marxists all over the world are fulfilling that very duty.

In the afternoon there was another session on the topic “Bolshevism , The Road to Revolution” which was chaired by comrade Qarni. This session was led off by comrade Aijaz Bhagio who beautifully explained the contradictions in the RSDLP, the Russian Revolution of 1905 and its failure, the opportunism of the Mensheviks, the ideology, methodology and tactics of the Bolsheviks, the Bolshevik Revolution of 1917 and the need for a Bolshevik Party in recent times.

Comrade Aijaz summed up by saying that each comrade must play his/her role in the revolution by fulfilling the tasks as assigned by the organisation. We have full confidence that we will lead and complete a worldwide socialist revolution.

Held on December 5th was the last session of the school regarding the strategy of work among the youth all over the country, chaired by comrade Babar and led off by comrade Paras Jan. Comrade Paras explained how important the role of youth is in a revolution and what tactics should be adopted in order to cover wider layers of youth. The lead off was followed by the regional reports from the whole section. Comrade Rashid from Kashmir, comrade Awais Qarni from Rawalpindi/Islamabad, comrade Saddam from Hyderabad, comrade Asim from Multan, comrade Sheharyar from D.G Khan, comrade Zaka from Karachi and other comrades presented the reports of their regions. Comrade Zubair, comrade Hareesh Kumar and comrade Riyaz also made their contributions regarding the youth work throughout the country.

The school was concluded by singing the Internationale.