The North Punjab Regional congress of the Pakistani section of the IMT was held on February 28th, in Rawalpindi. More than 150 comrades from Rawalpindi, Islamabad, Attock, Taxila-Wah and Abbottabad areas participated in the gathering, including trade union comrades, the PTUDC, People's Youth Organization, JKNSF, YFIS and BNT. 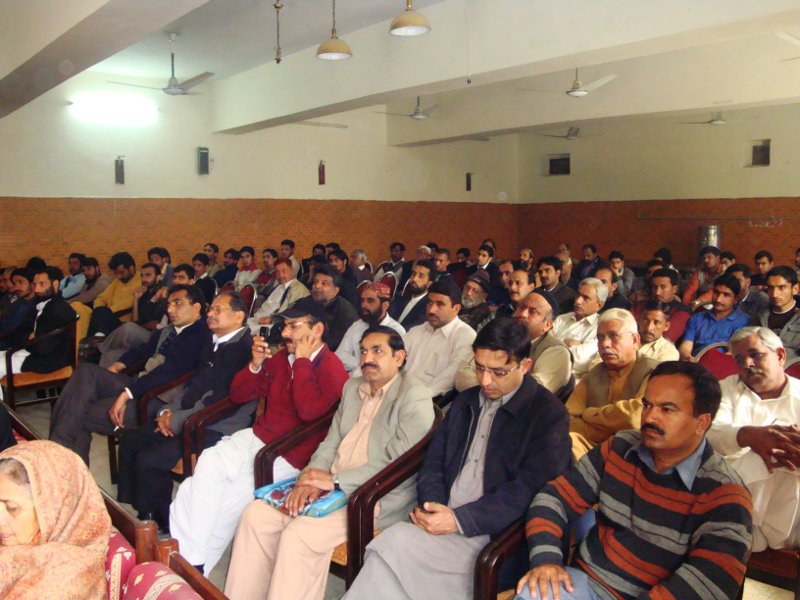 In the lead off comrade Paras Jan explained the international situation and the economic crisis and its affects on the working class the world over. He said that the wars and international uncertainty are due to the worsening conditions of American imperialism itself. Both the present government of Pakistan and the opposition parties are trying to convince the Americans that they can best serve the interests of imperialism.

Comrade Paras said that if Zardari fails to privatize the 21 state institutions which he has announced, then the right wing will be asked to do the job of fulfilling this condition imposed by the IMF for further loans. Due to the impotency of the Pakistan Muslim League (N) to play a role of opposition, the state is using the Judiciary, fundamentalists and media in order to divert the attention of the masses .

He further explained how the crisis of capitalism all over the world is getting worse with every day that passes which is causing more poverty, misery, hunger, unemployment, terrorism and unrest all over the world. In Pakistan the official unemployment figures shot up by 30% last year and this number will grow even further this year. But the official figures hide the countless millions of unemployed and underemployed that never make it to the official statistics. 6% of the country’s GDP is required for the development sector to keep the infrastructure in the recent form (which is already rotten) but the government is going to spend only 1.6% . Hence the conditions are deteriorating day by day. Pakistan is basically a bankrupt state which is running on loans and aid given by the IMF and other imperialist powers.

There were healthy contributions from many comrades in which they answered the questions asked by the audience and further enriched the discussion. Comrade Ijaz Khan from PTCL explained how the price hikes has made the lives of the masses more difficult and uncertain. He said that in this era the majority of society is living below the poverty line and ordinary workers are living a week to week life without any signs of improvement in their standards of living. A socialist revolution is the only way forward for humanity and the future of coming generations can only be bright if we are able to establish a classless socialist society through revolutionary struggle. He further threw light on the movement of the PTCL workers against the state policy of privatization and the revolutionary role of the comrades of the IMT in this movement.

Comrade Ghulam Mustafa from PTCL explained how the state and the ruling class rigged the recent trade union elections in PTCL. He said that these acts of the ruling class show how much afraid they are of the working class. He once again recalled the struggle of the PTCL workers against privatization and told the audience how workers and comrades had stood side by side like a rock against the oppression of state.

Comrade Um-e-Iman said that the Pakistan Peoples Party leadership is completely deviating from its founding manifesto and it doesn’t look like the party of Z.A Bhutto. Fauzia Shahid, a leader of the PFUJ (Pakistan Federal Union of Journalists) said that only socialism can solve the problems faced by humanity at present. She said that if the workers stop working even just for an hour everything comes to a halt and the state comes to its knees.

The Regional Organizer of the PTUDC and PFUJ (Pakistan Federal Union of Journalists) activist, comrade Rana Abrar said that agitation and civil disobedience alone are not the solution. A solid and organized revolutionary struggle based on Marxist ideas and led by a party like the Bolshevik Party can lead us to a successful socialist revolution. Reformism and so-called democratic revolutions are the illusions created by the ruling class and rotten left.

Rawalpindi Area secretary of the BNT, comrade Shakeel said that the youth can play a vital role in the revolutionary struggle against capitalism as it did in the revolution of 1968-69. Raja Imran from the Pakistan Railways said that only the International Marxist Tendency is offering alternative solutions to the crisis of capitalism and the workers all over Pakistan are being attracted towards it.

Summing up the discussion, comrade Paras said that following the classical Trotskyist traditions of working where the masses are, we work in the Pakistan Peoples Party as the working class looks to this party as its own. Genuine Marxists do not raise separate parties from the organisations of the working class, just as Marx and Engels stated in the Communist Manifesto.

He explained the nature and the magnitude of the contradictions within the Pakistani state and the possibility of a mass revolutionary struggle in the coming years. He pointed out the need to build a revolutionary organization capable of leading a Socialist revolution in Pakistan which will be the first step towards a Socialist Federation of South Asia and ultimately a World Socialist Revolution. In the end the delegates for the national congress were elected unanimously. The programme was concluded by singing the Internationale, followed by a protest rally on Murree Road against price hikes, unemployment, electricity outages and terrorism.