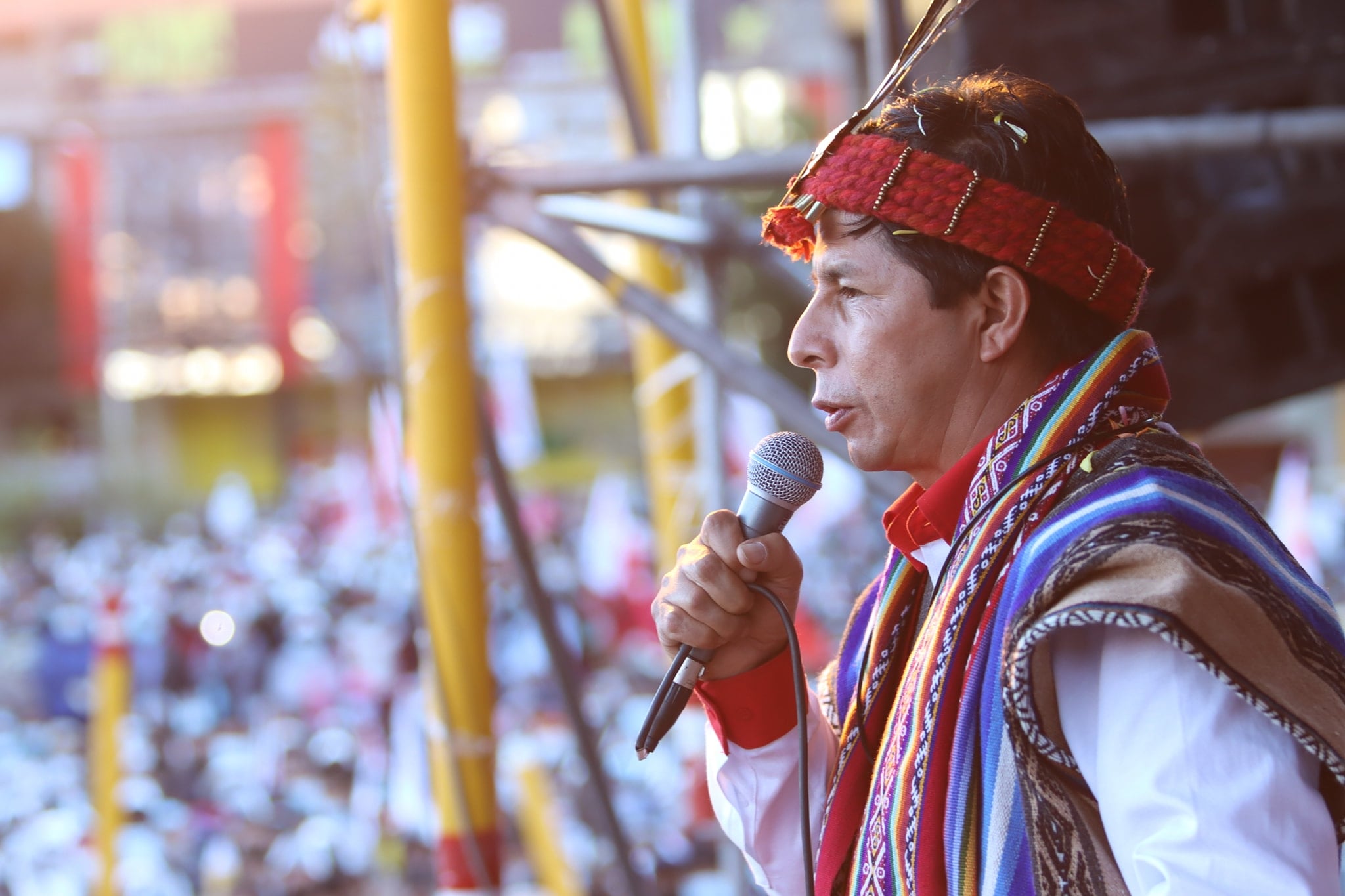 With just a few days until the second round of the presidential election in Peru, Pedro Castillo has only a very narrow advantage over his rival, Keiko Fujimori. The election reveals the enormous political polarisation in the Andean country, which has been devastated by the COVID-19 pandemic.

Pedro Castillo is a primary school teacher who rose to prominence as a national leader of the 2017 teachers’ strike at the head of a national committee that defied the trade union bureaucracy, and he is now the candidate of Perú Libre, a party that describes itself as Marxist-Leninist-Mariateguist. Keiko Fujimori is the right-wing, demagogic daughter of former president and dictator, Alberto Fujimori.

This election is a graphic representation of the deep crisis of the regime in Perú, where the last five presidents have all been either indicted or jailed for corruption. At the same time, the election expresses a deep political and class polarisation, with the mass media and the ruling class accusing Castillo of Communism and of being a puppet of the Shining Path guerrilla-terrorist organisation, and Fujimori being a far-right, reactionary candidate.

This situation is a reflection of the deep economic crisis and a massive polarisation of wealth, in a country that is rich in natural resources, particularly mining. In 2020, GDP fell by 11.1% and there have been nearly 190,000 COVID-19 deaths, the worst death rate and excess mortality in the world. Castillo’s slogan of “no more poor people in a rich country” clearly resonates amongst the poorest sections of society, the workers, peasants, the rural and urban poor, and the huge numbers of workers in the informal sector.

His campaign has centered on the question of renegotiating the contracts with the mining multinationals, such that Peru would be the main beneficiary of the wealth extracted from its soil and that this revenue can be used for social programs, mainly education. He has also threatened to nationalise the multinationals should they refuse to renegotiate. The other main plank of his campaign has been the question of convening a Constituent Assembly, something which is seen by the masses as a way of introducing fundamental change, as well as getting rid of the current Constitution, drafted under the Fujimori dictatorship.

Castillo started the second round of the election with a 20 point advantage over Fujimori, with the latter only enjoying a lead in Lima and amongst the top A and B social strata. The teacher militant on the other hand enjoyed a massive lead amongst the CDE poorer groups as well as in the north, south and east of the country, and a 40 point lead in the poorer, more indigenous rural areas.

That lead has since narrowed significantly. In the most recent opinion poll, Castillo leads over Fujimori by just 2 points (42-40) with 10% intending to spoil their ballot and 8% remaining undecided. Fujimori still leads in Lima (57% to 24%), while Castillo has a decisive advantage in the interior (52% to 30%), with massive leads in the Central regions (54% to 22%) and particularly the poorer South (72% to 18%).

Castillo's main opponent is Keiko Fujimori, right-wing demagogue and daughter of the former dictator. Castillo's substantial lead has been slashed to two points over his opponent after a campaign of vicious smears by the ruling class and Castillo's attempts to moderate his image / Image: Presidencia de la República del Perú

The narrowing of Castillo’s lead in the polls was partly the result of the vicious campaign against him on the part of the whole of the mass media and the ruling class, including massive billboards in Lima saying “Communism is poverty”, “Socialism leads to Communism”, etc. A united front of all the bourgeois parties is lined up against Castillo, with figures like Nobel Prize winner Vargas Llosa (who had always opposed Fujimori) saying a vote for Keiko is the “only way to save democracy”.

The ruling class is clearly worried about a possible victory for Castillo for two reasons. Firstly, because, despite the limitations of his programme, he poses the central question of who should benefit from the country’s wealth, and he challenges the power of the mining multinationals. Secondly, because he has articulated the aspirations of the country’s working class and poor, the most oppressed sections of society, giving a political expression to their anger and class hatred. The ruling class fears that once they are on the move, it will be very difficult to contain them.

Unfortunately, in response to this campaign of attacks by the ruling class, Castillo has attempted to present a more moderate and responsible face, reversing some of his earlier, more radical commitments, and toning down his message. This gave the impression of a vacillating candidate, which probably lost him some support amongst his own base and did not win him any support amongst the waverers.

As the election comes closer, Castillo’s advantage in the polls has been reduced to less than 2 percentage points, a technical draw. His campaign has managed to mobilise large numbers in rallies outside of Lima but also in the capital’s working-class and poor neighbourhoods. There have been big demonstrations against Fujimori and the deadly legacy of his dictatorship, and the main union confederation CGTP as well as the other left-wing parties have come out decisively in favour of Castillo.

The final result of the election is impossible to predict, but if Castillo was to win that would be an historic election. Castillo’s programme is one which is largely based on the idea of renegotiating the terms of mining contracts with the multinationals and, if they refuse, of nationalising them, so that their revenue can be used in social programmes (education, health care, etc.). Despite the Marxist rhetoric of the party (to which he is only a newcomer), the programme is a national-capitalist one, with appeals to national capitalists to work to develop the country. Perú Libre models itself on the governments of Correa in Ecuador and of Morales in Bolivia. Even leaving aside their limitations, those governments presided over a cycle of high prices of raw materials which allowed them certain room for manoeuvre to implement social reforms within the limits of capitalism. 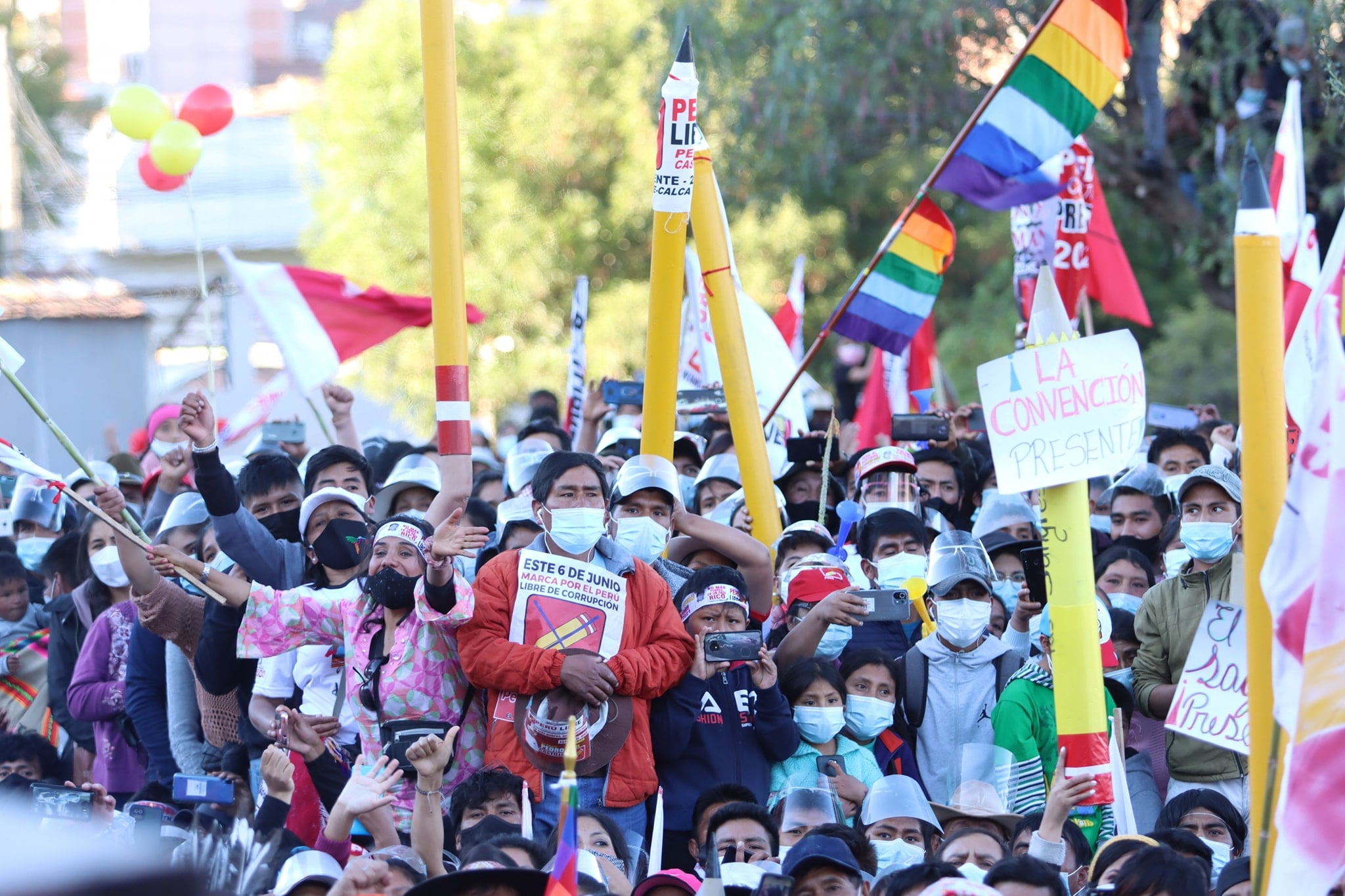 The bourgeoisie fears Castillo's candidacy because, despite the limitations of his programme, he has given a political expression to the aspirations of the masses. Once the Peruvian masses are on the move, it will not be easy to stop them / Image: Pedro Castillo Presidente 2021, Facebook

If Castillo were to become president, he would do so in a period of deep capitalist crisis worldwide. Any attempt, however limited, to infringe on the rights of mining multinationals will be fiercely opposed, by them and by Peru’s capitalists, setting the stage for intense class struggle. The ruling class would use all the tricks at their disposal to bring Castillo under control and to force him to remain within channels that are safe for the capitalists. The stage is already being set by attempting to drive a wedge between him and the party’s leader, Vladimir Cerrón, who is presented by the media as “more radical”. They will also use Congress, where Castillo only has 37 out of 130 seats, to limit his ability to rule. If they are unable to domesticate him (something which would disillusion his supporters and bring them into conflict with him) as they previously did with Ollanta Humala, they will then try to remove him from power by any means necessary (as they attempted with Hugo Chavez in Venezuela in 2002).

It should be noted that Castillo also espouses reactionary positions regarding abortion rights, gender equality in the school curriculum, and same-sex marriage. These are reactionary prejudices, which have to be combatted, and which reflect a stronger hold of right-wing ideas about these issues in rural areas and also the growing influence of evangelical churches, not only in Peru, but across Latin America.

The election in Peru is also part of a wider process in Latin America, one where deep accumulated anger and discontent caused by capitalist crisis, increased inequality (now compounded by the COVID-19 pandemic) has led to mass uprisings in Chile and Ecuador (2019), massive movements in Guatemala, Paraguay (March 2021), Colombia (September 2020) and Peru (November 2020), and now to the protracted national stoppage in Colombia.

The wind of revolution is sweeping Latin America again. The mass of workers and poor peasants in Peru will probably have to go through the school of Castillo’s reformism. The task of the Marxists is to point out that the only way to make sure that there are “no more poor in a rich country” is to expropriate the mining multinationals as well as the big businesses, land and banks in the hands of CONFIEP, the Peruvian Federation of Businesses.

That is the genuine tradition of J.C. Mariategui, the founder of the Peruvian labour and Communist movement, who once said: “The Latin American Revolution will be nothing more and nothing less than a stage, a stage of the world revolution. It will simply and clearly be the socialist revolution.”