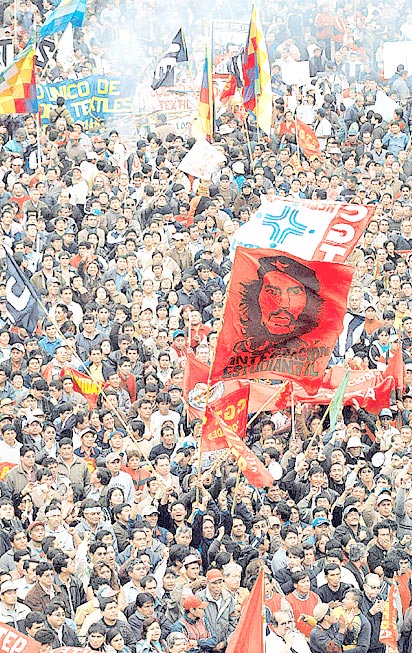 The national day of action is the highest point so far in a growing movement of protest against the policies of the Alan Garcia government, which was only narrowly elected a year ago. On Thursday, July 5th, the powerful and militant Peruvian United Education Workers Union (SUTEP) called an all-out strike of the 300,000 teachers that it organises throughout the country. This strike is against a new law dealing with the status of teachers in state education, which the union considers an attack on their conditions and a form of back door privatisation. There have been daily militant demonstrations of the teachers all over Perú, and on July 11, at the beginning of the national day of struggle, 5,000 teachers took over the installations of the international airport of Juliaca, the capital of the department of Puno, and destroyed its installations.

A whole number of southern regions had called a 48 hour general strike and some (Tacna, Moquegua and Puno) have now declared an indefinite general strike, linking up the demand of the workers and local population. Amongst them is Arequipa and some other regions which already witnessed mass uprisings against the privatisation of water in 2002 .

The national peasant organisations had also called for a 48 hour “agrarian strike” against the signing of the Free Trade Agreement which was widely followed with road blockades throughout the country.

The Miners and Metal Workers Federation has also joined the protests with a 48 hour strike, after copper miners have been mobilising for more than a month in a bitter dispute that has left several miners dead in clashes with the police. They are demanding wage increases and better safety conditions in the mines, taking advantage of a situation in which the price of copper on the world market has risen sharply.

The mood of rage of workers and peasants has been increased by the provocative statements of president Alan Garcia of the APRA party. He has insisted that, “the foundations of the country are solid, these are only a small minority of fanatics who want to defend their privileges.”

Furthermore, he accused Venezuelan president Hugo Chávez of being the force behind the protests, accusing Venezuela of interfering in the internal affairs of Peru.

There has been tension between Alan Garcia and Hugo Chávez since the elections one year ago, when Chávez accused Alan Garcia of fraud and did not recognise his victory over nationalist candidate Ollanta Humala. Many advanced workers and peasants in Perú sympathise with the Venezuelan revolution. In the last few weeks, the Peruvian media organised a demonstration of less than a hundred people outside the Venezuelan embassy in Lima to protest at the Venezuelan government’s decision not to renew the licence to RCTV. This demonstration was protected by anti-riot police, and police snipers were positioned on rooftops near the embassy in what was a virtual siege of the embassy. A much larger demonstration of about 2,000 people in support of the Bolivarian revolution was kept away by ani-riot police. (For pics and a report click here )

But the real reason for this mass wave of protests is the fact that Alan García has broken all of his election promises. He was elected on the basis of left wing demagogy - the only way he could fight Ollanta Humala in the second round of the election - only to carry out right-wing, pro-imperialist policies. In less than one year he has been thoroughly exposed. As we explained in an article by Anibal Montoya one year ago:

“A large part of the vote that went to Garcia’s APRA party was because of his left speeches and the rejection of what the masses interpret as being ‘neoliberalism’; that is the politics of hunger and submission to Peruvian capitalism. But Alan Garcia, a corrupt agent of the bourgeoisie and US imperialism, will have no option but to carry out the dirty work of his bosses in order to safeguard their interests (carrying on with privatisations, signing the FTAA, deepening the misery and poverty that will be extended to more and more sections of the population). And all of this will lead to a rapid rise in his unpopularity amongst the general population.”
The latest opinion polls show the rate of approval for Alan García dropping below 50 percent for the first time, a sharp fall of more than 10 points from the previous month. His approval rating amongst the poorest sections of the population in Lima is only 29%.  Faced with the massive character of the protests, the government has now decided to bring the Army into the streets for 30 days. There are also news of dozens of trade union leaders being arrested, mainly from the teachers' union. This include the General Secretary, Vice-General Secretary and Secretary of Organisation of the SUTEP teachers' union and the Organisation Secretary of the CGTP. These repressive measures once the masses are already in the streets can backfire and provocke and even wider mobilisation.
The slogans at the demonstration of Lima were a forewarning of what is to come: "here we are, we fear no more", "he will fall, he will fall, crazy horse will fall" (referring to Alan Garcia), and "the people united will never be defeated". These protests could mean the beginning of the end for the Alan García government, which could be overthrown by the mass movement, just as other governments in Ecuador, Bolivia and Argentina have been overthrown in recent years, as part of the revolutionary wave that is engulfing Latin America.