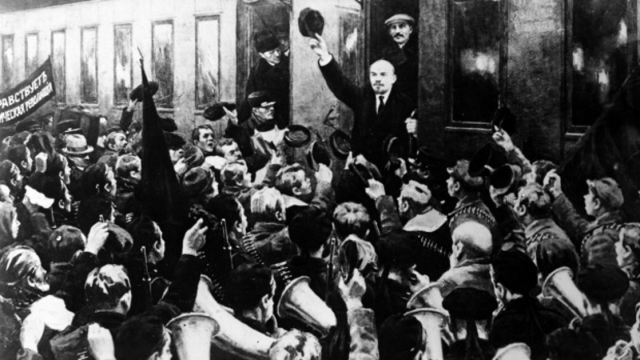 When the Russian Revolution broke out in early 1917, Vladimir Ilych Ulyanov – better known as Lenin – the leader of the Bolshevik faction of the RSDLP, was exiled in Zurich, Switzerland. As the first reports arrived of these extraordinary events, Lenin’s excitement was coupled with exasperation that he himself was separated from them by thousands of miles. “I am beside myself that I cannot go to Scandinavia!!” he complained bitterly, in a letter to his friend Inessa Armand. “I will not forgive myself for not risking the journey in 1915!”

“[Social] change never takes place ‘by itself’; it always needs the intervention of men, who are thus confronted with great social problems. And it is those men who do more than others to facilitate the solution of these problems who are called great men.” (G V Plekhanov, On the Role of the Individual in History)

“On the 3rd of April Lenin arrived in Petrograd from abroad. Only from that moment does the Bolshevik Party begin to speak out loud, and, what is more important, with its own voice.” (Leon Trotsky, The History of the Russian Revolution)

Immediately after hearing abou the revolution, Lenin resolved to return to Russia and play a part in the events to come. Over the next weeks followed urgent correspondences between Switzerland and other Bolshevik exiles and those running the Bolshevik centre in Petrograd, as Lenin prepared to join them. Even before his arrival on the scene he was providing analysis of the situation in the party newspaper Pravda (Letters from Afar) and outlining revolutionary tactics: “...the struggle against imperialism, as before revolutionary propaganda, agitation and struggle with the aim of an international proletarian revolution and the conquest of power by the ‘Soviets of Workers’ Deputies’ (and not the Cadet swindlers).”

In the final days of March, Lenin along with other Socialists in in Switzerland embarked on the dangerous journey to Scandinavia via war-torn Germany. As soon as he arrived at Petrograd’s Finland station on 3rd April, he gave a speech to his fellow Bolsheviks denouncing the provisional government and calling for international socialist revolution.

The party centre he found in Russia’s capital was completely at odds with the revolutionary vanguard which would lead the October insurrection little more than six months later. In Lenin’s absence not a single Bolshevik deputy had opposed the Petrograd Soviet’s approval of the Russian bourgeoisie’s provisional government. To make matters worse, when Kamenev and Stalin arrived from exile in mid-March, they proceeded to turn Pravda towards giving critical support to the new government, including its policy of continuing the war with Germany!

Lenin wasted no time in taking his comrades to task, criticising the mechanistic approach of Kamenev to the ‘bourgeois revolution’ before reading his famous ‘Theses’ on the tasks of the Russian proletariat the day after his arrival in Petrograd. By the time Petrograd conference of Bolsheviks took place at the end of the month, having been virtually a minority of one only weeks before, Lenin was winning around the majority of the party to his position. The importance of this change in the party line to the success of the October Revolution cannot be overstated. Lenin alone among the Bolsheviks at that stage recognised that only the Russian working class had the potential to carry through the revolution. His perspectives confirmed those of his fellow great revolutionary Leon Trotsky, who would join him at the head of the Bolshevik Party in just a few short months. On the basis of Lenin’s formulations, the Bolsheviks grew exponentially from being a tiny minority to winning the majority of the Soviets and leading the Revolution itself. 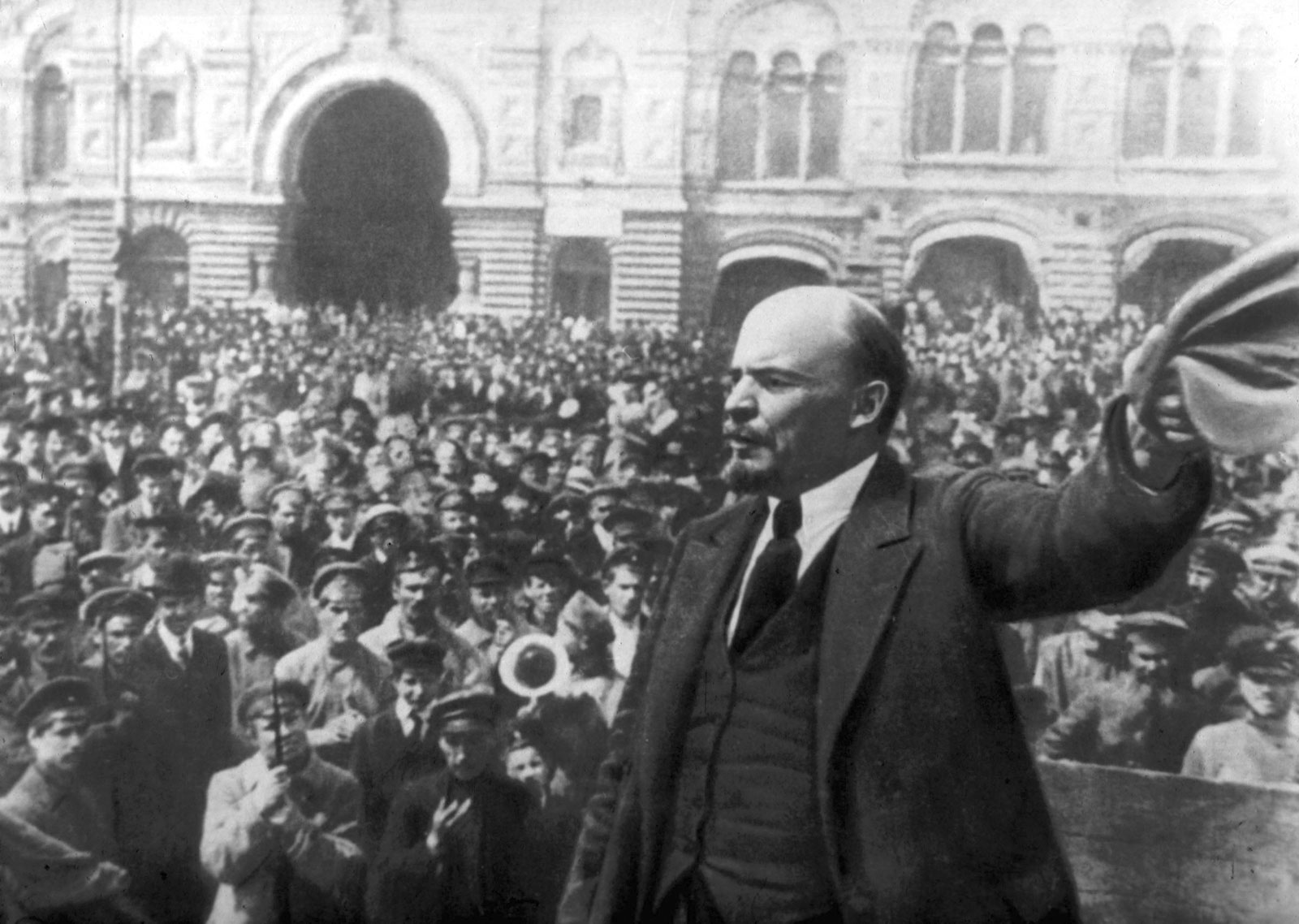 This reading guide contains a selection of Lenin’s most important writings and speeches from the April period, accompanied by works which provide further details of events at that stage of the Revolution. It follows on from our guide to the February Revolution and our comprehensive reading guide for the whole Russian Revolution. Next we will be publishing a guide for the June Days of 1917.

This introductory article illustrates how Lenin Theses on proletarian revolution winning round and transforming the Bolshevik Party proved to be a decisive turning point in the Russian Revolution, and draws from this example lessons we can apply to events today.

The History of the Russian Revolution Volume 1: Chapters 15-16 | Leon Trotsky Available for purchase

These two chapters of Trotsky’s History cover Lenin’s struggle among the Bolsheviks for a genuinely revolutionary programme.

This draft, written while still in Zurich gives the first detailed outlines of what was to become Lenin’s famous April Theses.

Telegram to the Bolsheviks Leaving for Russia | V.I. Lenin

This telegram sent to Stockholm from Switzerland restated Lenin’s position of resolute opposition to the bourgeois government to his comrades about to join those in Russia.

The Tasks of the Proletariat in the Present Revolution [April Theses] | V.I. Lenin

Lenin first read out his famous April Theses all two meetings of the All-Russia Conference of Soviets of Workers’ and Soldiers’ Deputies on 4th April. They presented for the first time to the Soviets a new revolutionary perspective, entirely different from the class collaboration and support for the bourgeois government offered by other Left parties.

These letters which  involve Lenin giving an overview on the present stage of the Revolution before polemicising against Kamenev on perspectives and tactical questions, were published as a pamphlet in April 1917.

The History of the Russian Revolution Volume 1: Chapter 17 | Leon Trotsky Available for purchase

In this chapter of his magnum opus, Trotsky covers some of the revolutionary events of April 1917, including the May Day demonstrations.

Alan Woods’ history of the Bolshevik party here explains the events set in motion by Lenin’s return to Petrograd, inside the party and beyond.

The “Government on Paper”

The History of the Russian Revolution Volume 1: Chapter 18 | Leon Trotsky Available for purchase

This chapter of the History examines in detail the first official government to inherit the revolution, and the month in which the masses turned against it.

The Revolution in Russia and the Tasks of Workers in All Countries | V.I. Lenin

While ostensibly a call to arms for workers around the world, Lenin’s speech gives extensive criticism of the coalition government in Russia in particular.

In this article published in Pravda in early May 1917, Lenin exposes the leaders of the Mensheviks and Social-Revolutionaries as social-chauvinists at the beck-and-call of their imperialist masters.

In this article, Trotsky dryly mocks the growing unrest in the Russian army towards the provisional government continuation of pro-war policies.

Lenin explains here that the dual power which has arisen from the Revolution reflects the class divide between the bourgeoisie and the proletariat.

Report on the Present Situation and the Attitude toward the Provisional Government | V.I. Lenin

A report delivered at the Petrograd City Bolshevik conference in April, describing the situation of dual power in Russia at that time, and its class basis.

Lenin polemicises against Plekhanov to argue against the fallacy of a mechanistic ‘two-stage theory’ of revolution.

In this piece, Lenin reiterates that a revolutionary government in the given situation must stand against capitalism.