Details
In Defence of Marxism
30 October 2015 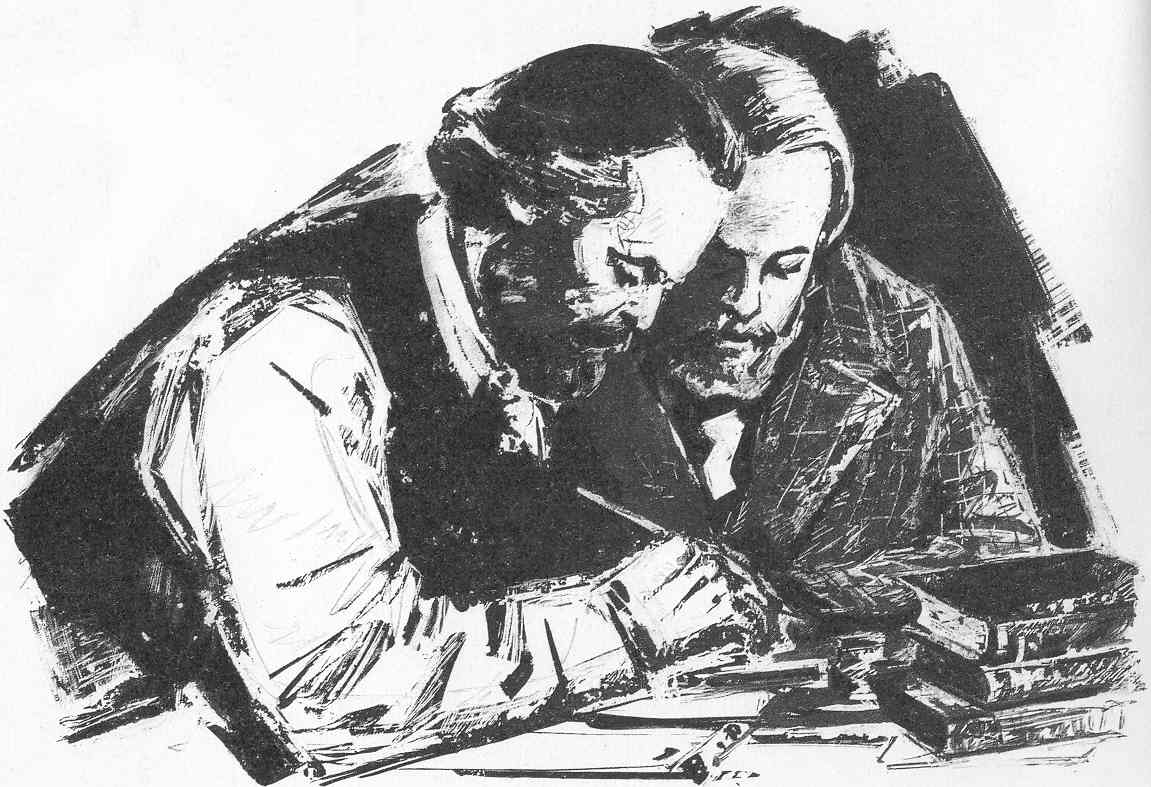 “It is, therefore, from the history of nature and human society that the laws of dialectics are abstracted. For they are nothing but the most general laws of these two aspects of historical development, as well as of thought itself.” (Engels)

The importance of dialectics

Many people do not realise that Marxism began as a philosophy, and Marx and Engels adhered to a definite philosophical standpoint all their lives – the standpoint of dialectical materialism. And although it may seem unlikely to some, it is impossible to understand Marxism without a thorough understanding of this subject.

Many people regard philosophy with a certain distain. It appears as something abstract, academic, dry and utterly remote from real life. This attitude is quite understandable. The “official” bourgeois philosophy that is taught in the universities is of interest only to a handful of academics who have nothing better to do than waste their time in endless and arid discussions on the meaning of words. But Marxist philosophy is not like that. It is a very powerful tool for understanding reality. And in order to change the world, it is first of all necessary to understand it.

The present world situation, with its crises, wars, terrorism, death and destruction, drives many people despair. They conclude that the world has gone mad. But in the words of that wonderful old philosopher Spinoza – one of the fathers of modern philosophical materialism - the task of philosophy is “neither to weep nor to laugh, but to understand”. That is an appropriate starting point for understanding the importance of philosophy for Marxists.

It was another great dialectician, Hegel, who pointed out that it is the wish for a rational insight, and not the accumulation of a heap of facts that must possess the mind of one who wishes to adopt the scientific standpoint. The dialectical method provides us with the necessary analytical tools we require to make sense of the mass of information we now possess about nature and society. An understanding of dialectics is therefore an essential prerequisite for any aspiring student of Marxism.

Here, however, we are confronted with a difficulty. The most systematic account of dialectics is contained in the writings of Hegel, in particular his massive work The Science of Logic. But apart from the highly inaccessible way in which Hegel sets forth his ideas (“abstract and abstruse”, Engels called it), the dialectic appears in the hands of Hegel in a mystical, idealist form. It was only rescued by the revolutionary work of Marx and Engels, who for the first time showed the rational kernel in Hegel’s thought. In its scientific (materialist) form, the dialectical method provides us with an indispensable tool for understanding the workings of nature, society and human thought.

Marx had always intended to write a work on dialectical materialism, but died before he could do so. After Marx’s death, his indefatigable comrade Frederick Engels wrote a number of brilliant studies on dialectical philosophy (Ludwig Feuerbach and the end of German classical philosophy, Anti-Dühring, and The Dialectics of Nature). The last-named work was intended to be the basis for a longer work on Marxist philosophy, but unfortunately, Engels was prevented from completing it by the immense work of finishing the second and third volumes of Capital, which Marx left unfinished at his death.

The task of putting together a more or less systematic exposition of Marxist philosophy still remains to be done. To the best of my knowledge, Reason in Revolt is the first attempt to apply the method of dialectical materialism to the results of modern science since The Dialectics of Nature.

Although there is no single book that expounds dialectics in its entirety, there exists a vast body of works in Marxist literature that deal with different aspects of philosophy. Scattered throughout the works of Marx, Engels, Lenin, Trotsky and Plekhanov, one can find a very large amount of material on this subject. But it would take a very long time to extract all this information.

The collected works of Marx and Engels consist of over fifty substantial volumes, while the Works of Lenin amount to more than forty (in the English language). Whoever has read all these books will undoubtedly have acquired a very sound knowledge of dialectics. However, this is the task of a lifetime, which not everybody will either wish, or be able, to undertake.

The purpose of the present reading list is to help to orient those readers who wish to obtain a knowledge of Marxist philosophy to acquire at least the most basic aspects of that subject. To make this task a bit easier, we have divided the list into three sections; 1) for beginners, 2) or those who have gained a basic knowledge of the subject and 3) for those who wish to acquire a deeper knowledge of dialectical materialism.

Some people may find this a challenging task, although personally I have never found it so. On the contrary, ever since I first read Anti-Dühring, when I was sixteen years of age, I have found it a subject of endless fascination and enjoyment. To those who think it too difficult, I urge you to persevere.

Of course, in the beginning, any new subject may seem difficult. The conquest of Marxist theory is rather like climbing a mountain. When, after all the exertions, you reach the summit, you will find, stretched out before you, all the vast expanse of history, the finest achievements of human thought, science, art and culture. At that moment, all the sacrifices will seem worthwhile, and a whole new vista will open up before you. You will not regret it.

What is Dialectical Materialism by Rob Sewell

- An introduction to materialist dialectics, including study questions and excerpts from Marxist classics. Available in What is Marxism.

The ABC of Materialist Dialectics by Leon Trotsky

- A brilliant, short introduction to dialectics. Available in What is Marxism.

- Engels’s account of the development of Marxist philosophy. This text is a very accessible introduction to Hegel, Feuerbach, and dialectical materialism. Available here.

- In polemicising against his contemporary Dühring, Engels gives a dialectical materialist explanation of natural science, morality and other aspects of philosophy. Available here.

Afterword to the Second German Edition of Capital by Karl Marx

- A short text by Max clarifying the relationship between his ideas and those of Hegel.

The Fundamental Problems of Marxism  by Georgi Plekhanov

- An excellent exposition of the Materialist method from a dialectical point of view.

- This book, by Ted Grant and Alan Woods published in 1995 coinciding with the centenary of Engels' death, defends the validity of the philosophical writings of Marx and Engels. It does this by showing that the scientific discoveries of the twentieth century confirm the very essence of the Marxist philosophical method, dialectical materialism.

- a book written by a non-Marxist which elaborates on the idea of ‘power laws’, suggesting that scientists have been asking the wrong questions in their attempts to understand reality. Although, at times the book can lean towards a mechanical approach, it provides a lot of very interesting scientific observations, which once again confirm dialectics.

The Crisis in Cosmology (three parts) by Adam Booth

- New evidence and inconsistencies have brought the established cosmological models into crisis. How can Marxist philosophy help us to understand our universe?

On militant materialism by V.I. Lenin

- Lenin explains the importance of the the philosophical struggle.

Theses on Feuerbach by Karl Marx

- These eleven theses are often considered to be the founding document of dialectical materialism. It is difficult to understand them at first, but they are condensed with insights and one always goes back to them. Available in The Revolutionary Philosophy of Marxism.

Dialectics of Nature by Friedrich Engels

- Marx and Engels were very keen on the scientific revolutions of their era, and how they related to Marxist philosophy. These are Engels’s notes that would have gone towards producing a book on this subject. Available here.

Materialism and Empirio-Criticism by V.I. Lenin

- Following the defeat of the 1905 revolution, the Bolsheviks were forced underground and entered into a period of trials and demoralization. In these conditions, alien, petit bourgeois ideas permeated the party and a number of Bolsheviks began to reject dialectical materialism. In response, Lenin dedicated a great length of time to writing the polemical work Materialism and Empirio-criticism, and the result was a masterpiece defense of Marxist philosophy.

In Defence of Hegel by Hamid Alizadeh

- The impact of Georg Wilhelm Friedrich Hegel’s ideas cannot be underestimated, and as Marxists we owe him a tremendous debt. However, he is much abused by the bourgeois and postmodern philosophers. This article provides a defence of Hegel and explains the real revolutionary content of his contributions.

- Lenin’s notes on the works of Hegel, Feuerbach, Marx, Engels and many others.

- In this work brilliant book, Hegel explains the basic laws of dialectics starting from the notion of Being.

Introduction to Phenomenology of the Mind by Georg Wilhelm Friedrich Hegel

- In this introduction to one of Hegels most celebrated books, he for the first time lays out his revolutionary dialectical method.