Details
In Defence of Marxism
14 November 2017 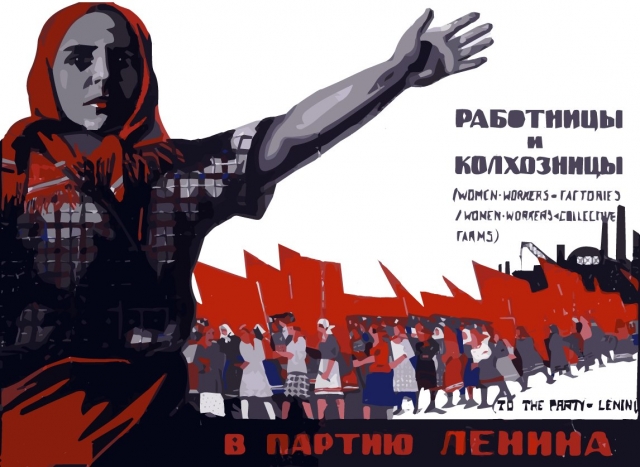 We publish here a series of essential texts on the subject of women and the Russian Revolution by the likes of Lenin, Trotsky and leading female Bolsheviks like Krupskaya and Kollontai.

The Russian Revolution began on the International Women’s day in 1917. The working women in Petrograd had had enough. Enough of war and hunger. Enough of carrying the double burden of work and domestic labour, while the men were being slaughtered in their millions in the conflict.

On March 8, they decided to go on strike, and called out the men. The workers engaged in strikes and demonstrations and fraternised with the soldiers. Five days later, the Tsar abdicated and the Russian Revolution began. Nine months later the October Revolution ushered in a qualitative leap forward in the conditions of women under the new Soviet regime.

The women in Russia not only played an important role in the February Revolution, but even before the revolution were already involved in revolutionary work. The conditions for women in Tsarist Russia (a backward country with thousands of years of patriarchal culture) were horrendous. The Bolsheviks did a great deal to organise the women workers by uniting the working-class across the lines of gender, nationality and so forth, as a precondition for leading the workers to victory in October 1917.

The new Soviet regime began the struggle to build a society free of oppression and inequality. The Bolsheviks immediately abolished all laws that put women at a disadvantage in relation to men. All restrictions on women's freedom of movement were removed. Before the revolution a wife was legally bound to remain with her husband and follow him if he moved. Far-reaching changes in property relations weakened the family as an economic unit, as well as the father's dominant position within the family. Other laws gave women equal rights to own land and function as head of the household. 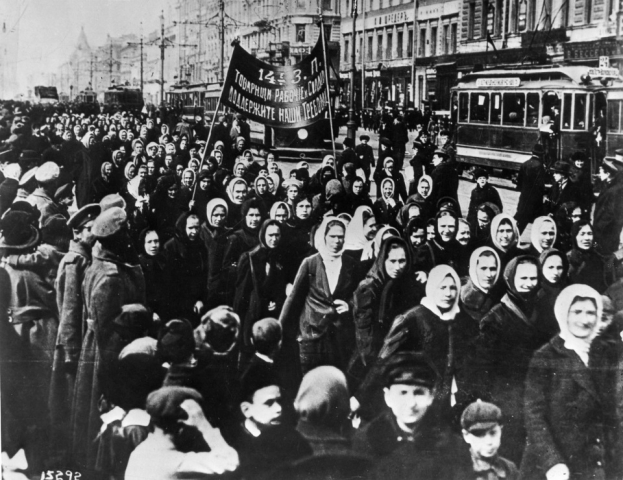 Free access to abortion was introduced as a right for all women. Church and State were separated, marriage, registration of children, etc. were taken out of the control of the Church. Marriage now took place through a simple registration process based on mutual consent. Each partner could take the other's name or keep their own. Divorce was made as easy as possible and could be achieved if one person demanded it, even without the other partner’s consent. The concept of illegitimate children was abolished. Paid maternity leave before and after birth was introduced and night work for pregnant women and women who had just given birth was prohibited. In addition, special maternity wards were set up.

Aleksandra Kollontai was appointed People's Commissar of Social Welfare in the first Bolshevik "government" after the revolution. Kollontai was thus the world's first female minister.

Equality under the law in Russia did not only apply to women but also to oppressed groups in general. Under the Tsar, homosexuality was prohibited and those who did not fit into the norms of gender and sexuality risked ending up in a labour camp. In 1918 a decree was issued stopping the application of pre-revolutionary Tsarist laws. In the new 1922 Criminal Code, homosexuality was decriminalised.

However, equality before the law was just the first step. Now it was a question of involving the masses, including women, in leading society towards socialism. Four days after taking power the Soviet government adopted a decree introducing the 8-hour working day, a crucial factor in making participation in politics possible for the working-class, especially the women. Under the new Soviet regime it was determined that the masses would govern society.

One of the means to reach this target was to set up the Zhenotdel: an organisation committed to propaganda and educational work among women, seeking to draw them into politics. The organisation was connected to the Bolshevik party, but was open also for non-party women.

The revolution was the precondition for the emancipation of women, but equality before the law did not solve the problems in itself. After the revolution the real work began.

The Bolsheviks had a vision to socialise the household burdens though the nationalisation of the economy. Creches, day care, communal kitchens and common laundries were to be set up. In this way, women were to be freed from the confines of the home.

But the revolution took place in a backward country shattered by the First World War. And immediately after the revolution the old ruling class rose up in a brutal civil war aided by the intervention of 21 foreign armies. All the resources of the new regime were spent trying to prevent the population from dying of hunger.

The situation of women is one of the most sensitive barometers of a society's cultural development. With the rise of Stalinism came also regression and an unravelling of many of the gains of the revolution. The rising Stalinist bureaucracy required the "old" bourgeois family as a social base as it carried out its bureaucratic political counter-revolution.

Stalin and the bureaucracy reintroduced the old bourgeois attitude towards the family, as the nucleus of society, and emphasized the woman's maternal role. In 1936, abortion was made illegal. Divorce was made more difficult and expensive, and thus reserved for the bureaucracy, and prizes were introduced to families that had many children. The opening hours for childcare were cut to coincide with the working day. The bureaucracy introduced segregated education in schools, and girls were taught special "‘girls' subjects" to prepare them for their role as housewives.

Prostitutes were arrested, in opposition to the former Bolshevik policy of only arresting the brothel owners and exposing the men who bought prostitutes, and offering prostitutes voluntary introduction to productive work. In 1933, homosexuality was once again criminalised. The Stalinist propaganda equated homosexuality with reactionary decadence by connecting it both with the old ruling class and fascism. This regression also spread to the national Communist Parties.

The rise of Stalinism meant massive social regression, with drastic consequences for women. But at the same time, the first five-year plans, introduced in the Soviet Union in 1928, led to economic progress that meant that women were drawn into the workforce on a larger scale, resulting in some progress in the fields of education, nurseries and the like. After Stalin's death, continued economic growth after World War II allowed for further material progress.

Life expectancy for women was more than doubled from 30 years in Tsarist times to 74 by the 1970s. Infant mortality was reduced by 90 percent. Education levels generally increased, especially from 1930 onwards. The proportion of women in higher education rose from 28 percent in 1927 to 49 percent in 1970. The only other countries in the world where women constituted over 40 percent in higher education were Finland, France, Sweden and USA.

The October Revolution was a huge step forward for Russian women. The revolution was a precondition for the liberation of women, but in and of itself could not solve all the problems they faced. It began the task of freeing women from domestic slavery, making them an equal part of society, eliminating prejudice and enhancing the level education and consciousness. However, because of the economic backwardness of the country, the Bolsheviks could only begin this task, they could not carry it to through to the end.

Listen to Marie Frederiksen (who prepared this guide) discussing the topic of Marxism and women's liberation at the 2017 IMT World School in Bardonecchia:

Women before, during and after the Russian Revolution by Marie Frederiksen

- This article was written in 2017 for marxist.com, and deals with revolutionary women in Russian both before and during the revolution, and also the work of the Bolsheviks and the Third International. Finally it looks at the conditions of women in Russia after the revolution and the impact of the Stalinist degeneration.

- This article, first published 18 July 2002, in issue Number 5 of In difesa del marxismo (the theoretical magazine of the Italian Marxists) also deals with the work of revolutionary women in Russia before and during the revolution, and looks at the conditions of women after the revolution.

According to Lenin no revolution is possible without the participation of women. On Marxist Internet Archieve can be found a collection of Lenin’s writings on women.

The pamphlet The Emancipation of women, From the writings of V.I. Lenin, released by International Publishers Co., contains more or less the same articles as on the MIA page.

- The collection includes texts from before the revolution dealing with how the development of large scale industry destroys patriarchal isolation of categories of the population who formerly never emerged from the narrow circle of domestic, family relationships. It also includes texts on the tasks of the revolution when it came to the liberation of women and the task of the proletarian women in the revolution, including how to raise democratic demands in the struggle for a socialist revolution. Also in this collection are texts and speeches from after the revolution on what was achieved for women workers and the huge tasks still ahead for the new Soviet regime.

The pamphlet on Lenin's writings mentioned above contains a preface written by his wife Krupskaya, dealing with Lenin’s writings on women and the achievements of the USSR.

My recollections of Lenin is included in the pamhplet mentioned above and can also be found online here.

- In this text, Zetkin describes a conversation she had with Lenin in 1920 on the women’s question. They discussed the need to build an international communist women's movement. It describes the achievements of the USSR concerning the rights of women, involving them in political life and the question of the family and sexual relations. It also contains Lenin’s criticism of some the methods of the German communists and the difficulties facing the Soviet communist party when it came to eradicating prejudices among male comrades.

Woman and the Family, Pathfinder, 1970

- This is a a collection of texts and speeches by Trotsky especially focusing on women and relations in the family, and how transforming the conditions of women in domestic life is an integral part of the struggle for emancipation of women. He explains how the Socialist Revolution is the precondition for women's liberation, but doesn’t in itself solve the problems they face. He demonstrates that a planned economy is essential in creating the material conditions that can raise the cultural level and bring about truly human relations. Some of the text can be found on the MIA (e.g. From the old Family to the New).

Thermidor in the family, Revolution Betrayed, 1936

- In Revolution Betrayed Trotsky deals with what was achieved by the USSR and how it regressed during the degeneration of the Soviet Union under the Stalinist bureaucracy. In chapter seven he describes how reaction, thermidor, was felt in family life and how conditions for women were thrown back by the Stalinists.

Preface to Leon Trotsky, Woman and the Family, Pathfinder 1970

- Theses adopted on the third congress of the Communist International in 1921 on how the work among women should be organised in the communist parties.

On women participating in the revolutionary work

- A short biography of ”Natasha”: a female Bolshevik who joined the Russian Social Democrats in 1902 when she met Lenin in Paris. She worked for the party in different positions, at one point as secretary for the Pravda editorial board, until her death in 1921.

The Autobiography of a Sexually Emancipated Communist Woman by Alexandra Kollontai

- Kollontai began her political work in 1894, and became a member on the Russian Social Democratic party in 1899. She was a Menshevik until 1915, when she joined the Bolsheviks. After the October revolution she became a People’s Commissar – the first female 'minister' in the world. Her autobiography was written in 1926.

- This book is a study of women participating in revolutionary work in Russia from 1879 until 1917. It gives a statistical overview on where and when women were active, but provides accounts from real women describing their lives and work.

- This is a thorough study on the conditions of women in Russia before and after the revolution, all the way up to the 1970s. It contains a lot of statistical material.