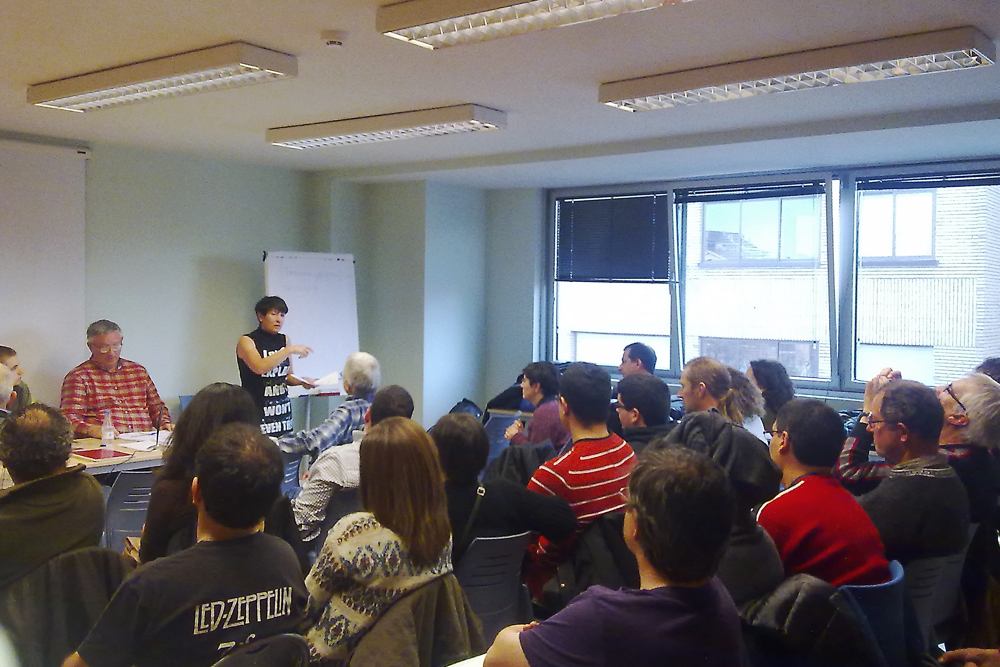 On December 6 and 7 the comrades of Lucha de Clases held a successful school in Vitoria Gasteiz. The total attendance was 39, of which about half were from Vitoria and the surrounding areas. The rest were comrades from Barcelona, Valencia, Madrid, Navarra, Malaga and Mallorca.

The mood of the meeting was very enthusiastic from start to finish, reflecting a growing thirst for Marxist ideas and the increasing radicalisation of the class struggle in the Spanish State, recently expressed in the general strike of 14 November.

The School began with a discussion on the crisis of capitalism and perspectives for Europe and Spain. It was introduced by comrade Alan Woods, the editor of the In Defence of Marxism website (www.marxist.com) and principal theoretician of the International Marxist Tendency. 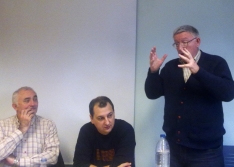 From the right comrades: Pepe Blanes, Ferran Alemany and Alan Woods Alan explained with a wealth of detail, facts and statistics that the present crisis was not cyclical in nature but systemic: “This is the deepest and most serious crisis in 200 years,” he said. “We have returned to the situation described by Trotsky in 1938: an organic crisis of capitalism.”

Referring to the crisis in Spain, Alan pointed to the revival of the working class, emphasizing the symptomatic importance of the miners’ movement, which he said represented a return to the real revolutionary traditions of the past. He predicted a stormy future in which the workers and youth would rediscover these traditions.

Referring to the role of the reformist and trade union leaders, he said they were the most conservative force in society. They imagine that they are great realists, but in reality they are the worst kind of utopians. They reflect the past of the movement, not the present or the future.

Finally, Alan emphasized the need to build a strong Marxist tendency with roots in the mass organizations of the working class. He appealed to every comrade to build the International Marxist Tendency and Lucha de Clases. His words were met with warm applause.

There followed a lively session of questions and contributions. A young shop steward from Aratubo, stated that the main problem was that the leaders of the unions were out of touch with the members and had salaries that placed them in a privileged position that made it impossible for them to really represent the workers.

In his reply, Alan said that union leaders ought to be prepared to accept a wage no higher than the highest category of the workers who elected them: “The unions were not built by careerists looking for well-paid jobs but by thousands of ordinary workers who were prepared to sacrifice their jobs, their liberty, their families, even their lives. These are the people who can best represent the working class,” he said.

Alan predicted that in the coming period the mass organizations – both trade unions and political parties – would be shaken from top to bottom: “In the past it was possible to get concessions easily through negotiation. Now every attempt to defend living standards and jobs demands a hard struggle. The union leaders will either be forced to give a lead or else be replaced with peopled who are willing to fight.

“We must develop a serious Marxist current that can lead the fight to transform the mass organizations into real organs of struggle, while simultaneously fighting for a real socialist policy to change society.”

Alan went on to deal with the national question today, and particularly with Catalonia and the Basque Country (Euskadi).

Both these parties represent the interests of the bourgeoisie. The Catalan bourgeois is particularly reactionary and greedy. It does not want independence but uses the national question as a bargaining counter to grab more concessions from Madrid.

The CiU government of Artur Mas carried out a vicious policy of cuts and had excellent relations with the right wing PP in Madrid and in Catalonia, on which it relied for the approval of austerity budgets. But these policies led to a collapse in its electoral support. Mas therefore decided to play the nationalist card in an attempt to regain support.

“Mas is a particularly stupid bourgeois politician,” said Alan. “He did not need to call early elections, since he had another two years to go. He thought he would get an absolute majority, especially after the massive demonstration on the Diada (Catalonia’s national day, the 11 September).

“But he miscalculated badly. CiU went down from 62 deputies to 50 in the Catalan parliament and the main pro-independence party, ERC, gained ground at their expense”.

Alan pointed out that the class struggle always tends to cut across national divisions. He emphasised that the general strike of 14 November was massively supported by the workers all over the Spanish State, including Catalonia. That also had an effect in the Catalan elections, reflected in a sharp fall in the vote of the CiU.

“Now there is a mess. CiU now needs the support of ERC which is formally opposed to cuts and demands a referendum on independence. The right wing of CiU, Unió is having second thoughts about independence and wants to ‘rebuild bridges with the PP’.”

It was completely false to argue that in an independent Catalonia the workers would be better off than now.

As to Euskadi, Alan pointed out that the leaders of the Basque trade unions (ELA and LAB) had once again boycotted the general strike of 14 November. This was doubly ironic since this strike was supposed to be an all-European affair. This action has caused serious divisions in ELA and LAB and also in the political organizations of the radical Basque nationalists.

Alan was scathing about the self-styled Marxist sects who tail-end the nationalists. He said it was a scandal that so-called leftists refuse to march together with the UGT and CCOO but are willing to march behind the banners of the bourgeois nationalists.

He emphasised that the growth of the radical nationalist movement Bildu was the result of the total failure of the Left to offer a serious socialist policy. He predicted that in the future these nationalist organizations would tend to split between right and left, as divisions opened up between those who wanted a deal with the bourgeois PNV and the rank and file workers and youth who aspire to socialism. We must have a patient and friendly attitude to the rank and file, while maintaining an implacable criticism of bourgeois and petty bourgeois nationalism.

Alan also pointed to the growth of reactionary tendencies in the Spanish army, where there have been noises about a threat to the unity of Spain and even warnings about sending the army into Catalonia:

“All this is the result of the betrayal of the leaders of the PSOE and PCE in the so-called “Democratic Transition”, which was a gigantic fraud. It left intact the old state apparatus, even accepting the Monarchy. The Church kept all its old privileges. The army and Civil Guard were never purged. Nobody was ever punished for the crimes of the Franco dictatorship. But now all the old demons are reviving.”

The perspective was for an intensification of the class struggle and a sharp split between right and left that will provide many opportunities for the Marxist Tendency: “The revolutionary traditions of the workers of these lands are not dead. They are alive in the working class and will come to the fore very quickly,” he said.

Pepe BlanesThis brings us to the third topic on the agenda, the Transition, which was introduced the following day by Pepe Blanes. Pepe gave a very detailed and graphic account of the revolutionary events that preceded and followed the death of Franco and the final crisis of the dictatorship:

“It was a great privilege to live at that time and participate in those great events, and there are quite a few of us in this room who had that privilege, and are now even more privileged to be present in a new beginning,” he said.

Pepe explained the leading role of the working class in all these events. He pointed out that the development of industry in the 1960s and 1970s had greatly strengthened the working class, which in the 1930s had been a minority compared to the peasantry but by the 1970s was a decisive majority.

It was the mass strikes in Pamplona, Madrid, Barcelona and Vitoria that undermined the dictatorship and plunged it into crisis, he said. The workers could have taken power, but were held back by the leadership – especially of the Communist Party and Santiago Carrillo.

Behind the backs of the workers, the leaders of the PCE and PSOE formed the so-called Junta Democratica and the Plataforma Democratica.

They did a deal with sectors of the dictatorship led by Adolfo Suarez. “Let us recall that Suarez was General Secretary of the Movimiento – the fascist organization that ran the state,” he said. “In the Junta Democratica there were people like Gil Robles, who led the fascist CEDA in the 1930s. Carrillo even invited Don Juan de Borbon, the father of King Juan Carlos, to join it, but the latter refused.”

A key turning point was the general strike in Vitoria on 3 March 1976, when the police murdered five workers and wounded at least a hundred. There was a spontaneous reaction of the workers all over Spain, with strikes, general strikes and demonstrations. But the leaders of the Communist Party called for calm and applied the brakes.

Another key moment was on 23 January 1977, when fascist gunmen murdered five lawyers of the Workers Commissions in Madrid. This provoked such fury in the working class that insurrection was on the order of the day. Carrillo and the PCE leaders once again applied the brakes. In the massive demonstration that followed, the PCE leaders prohibited any banners, placards or shouting of slogans. The workers, out of a sense of discipline, swallowed their rage and marched in silence.

The result of all these manoeuvres was an abortion, the so-called Democratic Transition. The working class is still paying the price for that betrayal.

There followed a very interesting discussion in which several comrades who had participated in those events provided vivid and moving accounts of their experiences. Mila Sanmartin described the electric mood of the workers in the mass assemblies during the revolutionary events in Vitoria in 1976. She pointed out that the movement was led, not by the Communist Party, but by the elected representatives of the workers: the Representative Commissions: “They were really soviets,” she said.

In summing up the discussion, Pepe Blanes stressed the importance of studying these events and learning the lessons: “Sometimes the knot of history can be broken. We are very fortunate that we are once again present when the knot of history is being re-tied.”