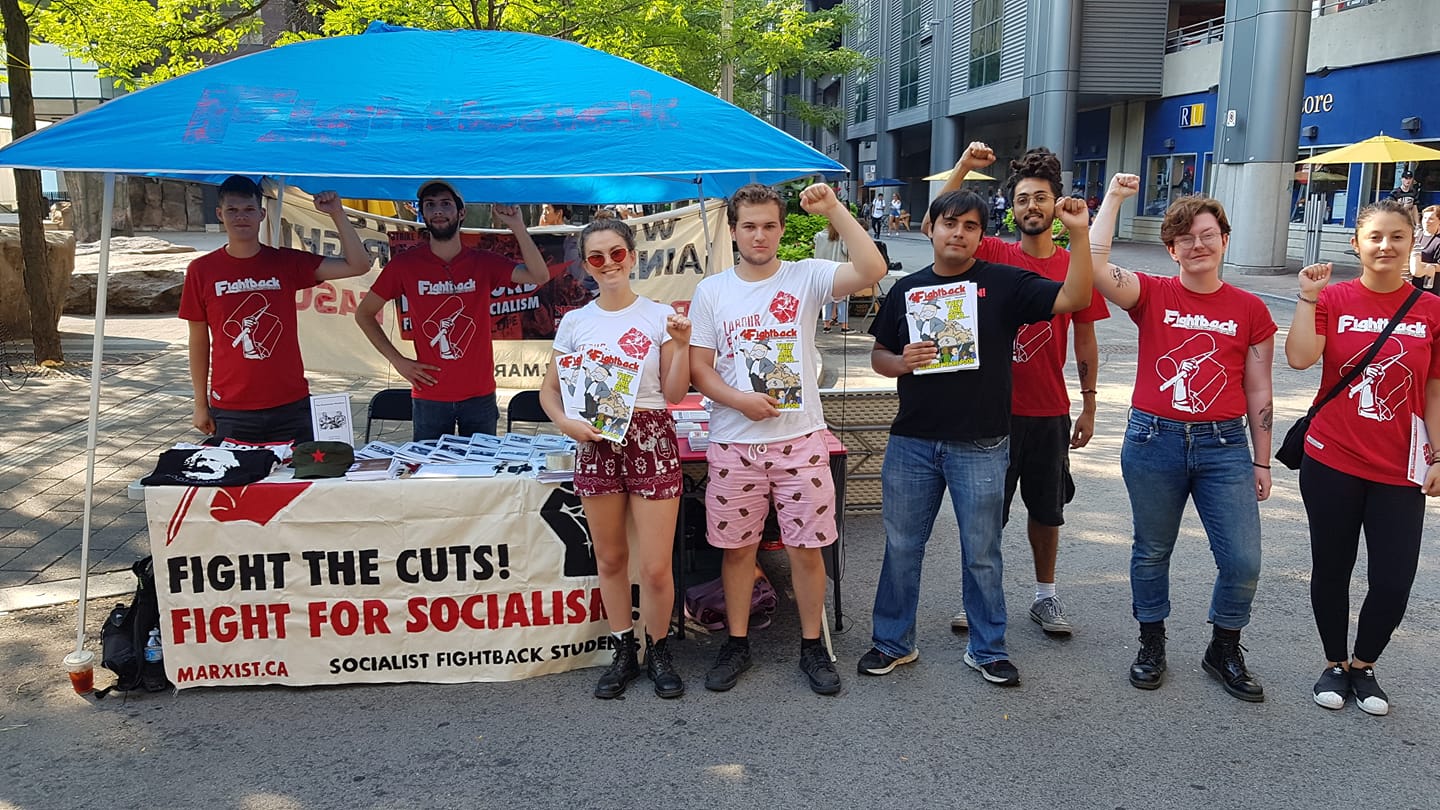 This autumn, the forces of Marxism have spread across Canadian campuses as never before. In the face of economic crisis, youth are questioning capitalism and are searching for answers that only revolutionary Marxism can provide. Since the start of September, Socialist Fightback Students (SFS) has collected well over a thousand emails, sold hundreds of papers, and started dozens of revolutionary reading groups across Canada, thus enrolling a new wave of youth in the fight against capitalism.

This September, Socialist Fightback activists were hard at work at Concordia and McGill in Montreal. We had a strong presence in the first few weeks of the semester, collecting more than 350 sign-ups and selling over 160 papers. The success of the start-of-term pub night at Brutopia, which saw 70 people attend, showed that Fightback is now an established part of student life. This energy and enthusiasm carried over to the first two public events of the semester, “The Real History of the American Revolution: A Marxist Analysis” at McGill and “The Capitalist Crisis and the Socialist Solution” at Concordia. Each of these was packed with 50 to 60 attendees. With these results, it has become clear that Socialist Fightback is the dominant political group on both campuses.

Activists with La Riposte socialiste etudiante at UdeM, UQAM, and Cegep Marie Victorin had their most successful fall semester to date. The thirst for Marxist ideas was clear at events such as “What is Socialism?”, “Why Fight for Socialism?” and “Faced with the crisis of capitalism: Reform or Revolution?”, which brought in many students looking to get active in a revolutionary organisation. In total, we sold more than 165 copies of our paper La Riposte socialiste, and collected at least 150 signatures from those wanting to get involved.

This has been a record-breaking year for Socialist Fightback at Ryerson. At the Ryerson clubs fair, Fightback was by far the largest and most visible group. This decisive presence was put to good use when a group of anti-choice religious fundamentalists showed up on campus to antagonise students with disgusting photos of dead fetuses. Members of Socialist Fightback teamed up with other student activists to cover these photos, forcing the anti-abortionists to pack up shortly thereafter. Students came up to thank us after this, many of whom also decided to sign up with our club. Throughout the day, 130 students signed up to get involved, and we sold almost 60 copies of our newspaper. The trend of runaway successes continued with the first Socialist Pub Night of the semester, which was attended by nearly 100 people over the course of the night. This was followed by our first public discussion on “What is Marxism?” which was attended by more than 50 people. Many of the attendees were eager to get organised, and are now actively involved in the work of the club.

The fledgling Socialist Fightback club at George Brown College had an excellent first few weeks this September. The first event, on “Marxism vs. Identity Politics”, was attended by around 40 people, nearly all of whom were open to the ideas of Marxism and our critiques of the academic left. With more than 70 students signing up with our club over the course of the month, Socialist Fightback at George Brown College is off to a great start!

At the UofT Clubs Carnival and Street Fest, the Socialist Fightback stall saw a steady stream of interested students and avid discussion. Between these two events, more than 200 students signed up to our email list and at least 40 Fightback papers were sold, showing a growing thirst for revolutionary ideas among students.

Our first event of the month, “Defend the Right to Strike!”, presented by Fightback editor Alex Grant, was a huge success with approximately 60 people in attendance. It was a timely discussion, which linked the Ford government’s attacks on labour rights—such as those of the York University TAs who were legislated back to work—to his broader attacks on workers in Ontario. Alex explained the need for a mass, militant labour movement to fight such attacks, including defiance of back-to-work legislation and solidarity strikes. During the discussion many young workers commented on low unionisation rates, precarious jobs and stagnant, low wages in Ontario—conditions that students will have to deal with upon graduating, if they do not work already. We appealed to all students to get involved in Fightback and to help us build support for the socialist ideas and militant methods that are needed to win, in both the labour and student movements; a call that many are taking up by joining reading groups and volunteering to help out with our upcoming events and rallies.

Socialist Fightback Students at York University have continued to stake their claim as the largest and best-organised club of any kind on campus, with a series of tablings, a pub night, a massive showing on clubs day, and a whole programme of public discussions, including “What is Marxism?”, “Why We Need a Socialist Revolution”, “How to Fight Oppression: Marxism vs. Identity Politics” and a panel on “How Students and Workers Can Fight Doug Ford”. These events have a regular attendance of over 40 each, attracting young people who are frustrated with capitalism and eager to get involved in revolutionary organising. At least 200 students have signed up with Fightback at York, and we sold more than 80 papers. This is just the start of what will be a stellar year.

Socialist Fightback Waterloo had a busy month of events, starting with a lively Socialist Pub Night attended by 20 people. The literature stall at clubs day saw 70 sign-ups and more than 20 paper sales. At the public event on “Why We Need a Revolution” there were 35 people in attendance and an enthusiastic discussion, with many expressing a desire to get active in Marxist organising. This event was followed by a public reading group on the Communist Manifesto, which was similarly very successful. We also intervened in the "When Will Capitalism End?" event organised by the German Studies Department, where the comrades defended the relevance of Marxist ideas today. There are more activities planned in the coming months.

After a challenging year, during which Fightback activists in Hamilton faced intimidation from the far right and harassment from the Hamilton police, this year marked a qualitative shift in our work in the city. During the move-in week at McMaster, the Socialist Fightback Students club held an event on "The Ideas of Karl Marx". Despite the fact that school hadn't even started yet, 25 people attended and were enthused by the event, many of them signing up to join the Fightback Hamilton Labour Day contingent. This helped us to organise the largest contingent Fightback Hamilton has ever had on Labour Day, which no doubt left an impression on workers in the city. At McMaster clubs day, more than 100 people signed up to learn more about Fightback. Our public event on "Why We Need a Revolution" was popular and attracted students from all backgrounds, eager to learn how to get involved and how to fight the capitalist system.

Socialist Fightback in Edmonton is growing quickly, despite the bureaucratic hurdles put in place by the University of Alberta. While not being allowed to have more than two people at our table at a time during the clubs fair, nor being allowed to initiate contact with fellow students, we still collected over 70 signatures. We held a series of public events, each attended by more than 20 people, on “What Is Marxism?”, “Does Canada Need a Revolution?”, “Marxism and the Struggle Against Racism”, and “China: Capitalist or Communist?” These events have generated enthusiasm among attendees, as demonstrated by the strength of our public collections. One event set a new record with $75 in donations! This fantastic response shows that in Edmonton there is a thirst for a socialist answer to the current problems of the world.

Meanwhile, at the University of Victoria, Socialist Fightback participated in clubs day, where we collected 35 emails and sparked interest in revolutionary ideas with a Socialist Pub Night and a public event on “What is Socialism?”

All in all, Socialist Fightback Students has had its most successful start to the semester in our history. We encourage all of those interested in joining us or building your own Socialist Fightback club on campuses across the country to contact us to begin the work!