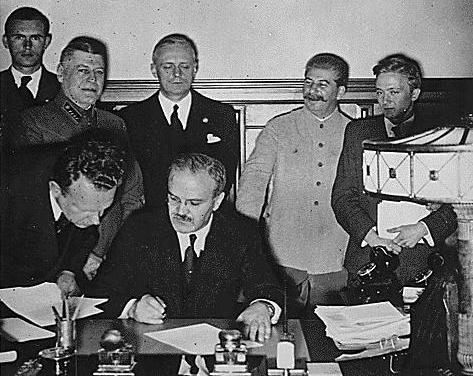 In the early hours of August 24 seventy years ago Germany and Soviet Russia signed a "non-aggression pact", which divided the states of Northern and Eastern Europe into German and Soviet "spheres of influence", effectively slicing Poland into two halves. Ben Peck looks back at what happened and explains why such an incredible event could take place – and the price that was paid.

The Stalin-Hitler pact has gone down in history as a mark of the absolute cynicism of the bureaucracy. It was a treacherous agreement that involved the occupation and division of Poland, half to Stalinist Russia and half to Hitler’s Germany. Such a move was described by the Stalinists as “defensive”. The Pact did not prevent war between Germany and Russia, but certainly helped Hitler in his war aims. It caused confusion and demoralisation amongst honest communists around the world, who for years had been denouncing Hitler as the foremost enemy of the labour movement and a threat to world peace.

Unlike Stalin, who sought all kinds of diplomatic deals with the imperialist powers in accordance with the theory of ‘socialism in one country’, and cynically sacrificed the revolution in the west, for Lenin and the Bolsheviks the guiding principle was the promotion of the world socialist revolution. This was a principle based on very concrete considerations. For a backward country like Russia, encircled by the imperialist powers, the spreading of the revolution internationally was the key to its survival and development toward world socialism.

When out of necessity Lenin and Trotsky signed the Brest-Litovsk peace treaty in 1918 it meant a strengthening of German imperialism, allowing them to take the Ukraine. The idea of a workers state dealing with capitalist nations is not precluded by socialists – each case must be weighed and considered as to how it advances the cause of the workers on an international scale. The Brest-Litovsk treaty of 1918 was forced upon the Soviet republic by Germany as its very survival was at stake. However Lenin and Trotsky saw such diplomatic manoeuvres as secondary to the only real saviour – the spreading of the revolution itself, starting with Germany.

The signing of the Stalin-Hitler pact must be seen in a different light. It marked a further break with the traditions of Bolshevism and the foreign policy of Lenin and Trotsky. As Trotsky said at the time, it was an “extra gauge with which to measure the degree of degeneration of the bureaucracy, and its contempt for the international working class, including the Comintern.”

Clearly, the rise of Fascism in Germany had had a devastating impact on the working class internationally. The mightiest and best organised labour movement in the world had allowed Fascism to triumph, as Hitler boasted, ‘without breaking a window.’ The reason for this catastrophe was the insane actions of the Stalinist Communist Parties.

By 1927 Trotsky and the Left opposition were being expelled from the Communist parties and its supporters were being hounded by the Stalinists. In face of the menace of Fascism, they raised the need for a United Front in Germany of socialist and communists. The Stalinists in Russia, having leant on the Right to defeat the Left Opposition, now proceeded to crush Bukharin and the enriched peasantry he represented. This was reflected by the ultra-left turn in the Communist International in 1928. This meant denouncing every group that was not the Communist Party as a variant of Fascism: “social-fascists”, “liberal-fascists”, and worst of all, the “Trotsky-fascists.” Such nonsense simply demoralised the workers and played into the hands of Hitler's gangs.

The utter bankruptcy of the leaders of the German CP was revealed when Hitler was made Chancellor. They dismissed it with the declaration: “first Hitler, then our turn”! The Nazis divided and paralysed the German working class, which finally led not only to the arrest and persecution of the Jews, but also the liquidation of communist and socialist parties and all independent workers’ organisations. After this disaster, which did not even cause a ripple in the Communist Parties, Trotsky realised that the Communist International was finished and could no longer be a tool that could be used to further the cause of the international working class. A new international was needed. 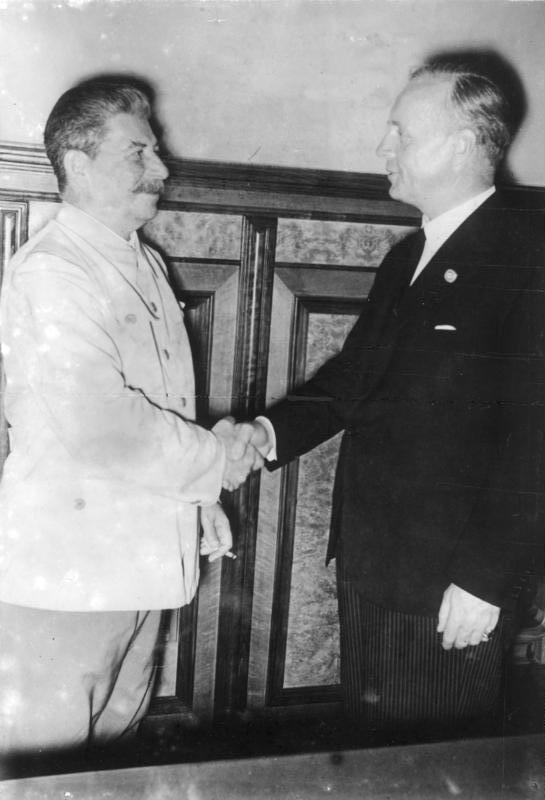 German foreign minister Ribbentrop and Stalin at the signing of the Pact. Photo by Deutsches Bundesarchiv. At this point it is questionable whether the Stalinist bureaucracy was actively seeking to sabotage the workers' movement as they later did in Spain in 1936, where it was clearly acting as a conscious and self-interested caste out to preserve its own position. The Spanish Stalinists acted on a line dictated from Moscow that demanded the sabotage of the revolution and the concentration of all effort on the civil war. The Stalinists were clear: “At present nothing matters except winning the war; without victory in the war all else is meaningless. Therefore this is not the moment to talk of pressing forward with the revolution… At this stage we are not fighting for the dictatorship of the proletariat, we are fighting for parliamentary democracy. Whoever tries to turn the civil war into a socialist revolution is playing into the hands of the fascists and is in effect, if not in intention, a traitor.”

This policy stemmed from their new policy of Popular Frontism, adopted in 1935 which represented a 180 degree turn. Rather than the United Front of worker organisations, the new Popular Front policy sought the unity of communists with socialists, liberals and “progressive”, “anti-fascist” capitalists. From mad ultra-leftism they swung to desperate opportunism. They abandoned all principles in order to ingratiate themselves with every “progressive” anti-fascist possible. It therefore meant the abandonment of any independent action of the working class - the only way to defeat Fascism.

At the level of international diplomacy Stalin sought to prove to the capitalist democracies that he was a reliable ally by selling out the Spanish revolution. In 1936 Stalin publicly announced that the USSR never had any such intentions of promoting world revolution, and that any such misconception was the result of a 'tragicomic' misunderstanding.

At this point the persecution of all opposition and political dissent inside the USSR reached fever pitch. The Purge Trials of 1936-38 drew a “river of blood” between the regimes of Lenin and Stalin. From August 1936 the world-wide Stalinist press was publishing on a daily basis resolutions from “workers meetings” speaking of the defendants as “Trotskyist terrorists” conducting their activities in league with the Gestapo!

Of the members of the Central Committee who met at the 17th Congress of the Communist Party of the Soviet Union in 1934, the overwhelming majority had been shot or disappeared by 1938. The Purges extended far and wide. Those shot included Bukharin, Kamenev and Zinoviev, members of the Politburo under Lenin. The Red Army was purged with leading military figures murdered such as Tukhachevsky, a military genius and hero of the Civil War. In total 90% of generals, 80% of colonels, and 35,000 officers were liquidated by Stalin. The Red Army was decapitated. This fact was well noted by Hitler, particularly after the Soviets‘disastrous campaign in Finland in 1939, which played a part in his calculation to attack Russia in 1941.

Last page of the Additional Secret Protocol Lenin was fond of quoting the Prussian military theorist Clausewitz when he said that “war is the continuation of politics by other means.” The one-sided Civil War conducted against those genuine communists who remained in the Soviet Union marked the full emergence of a conscious and self-aware bureaucracy. The possible success of the Spanish revolution would have rejuvenated the aspirations of the Russian workers and undermined the stranglehold of the bureaucracy. It was no coincidence that the Moscow Trials took place at this time. If Stalin had not moved to suppress the Russian workers in blood, he would have been removed.

War was coming. The western “democracies” were not keen on a deal with Stalin. Stalin, the pragmatist, therefore sought a deal with Hitler. This was the solution, or so he thought. After the British handed Hitler Czechoslovakia on a plate, Stalin urgently needed an agreement with Hitler – whatever the cost. Within a week, the Stalin-Hitler Pact was signed. Even the pliable leaderships of the Comintern were taken by surprise. In Britain, the general secretary of the CP, Harry Pollitt, did not jump fast enough and within a few days had fallen into disgrace and was removed on Moscow’s orders.

The pact provided the Nazis with raw materials which funded the Nazi war machine in Europe, later to be turned against the USSR itself. By 1940 Russia supplied Germany with 900,000 tons of mineral oil, 100 tons of scrap iron, 500,000 tons of iron ore along with large amounts of other minerals. Soviet diplomats grovelled before the Führer in order to ingratiate themselves. In his cynical fashion, Stalin expelled each ambassador from the territories of the USSR as their countries were occupied by the Nazis armies.

In June 1941, to Stalin's complete surprise, Hitler invaded Russia, meeting little resistance on the way. Despite the obvious signs and clear warnings, the USSR was totally unprepared and suffered heavy losses. Stalin, on hearing the news, disappeared for more than a week, declaring “All that Lenin built is lost.”

Eventually regaining his nerve, resistance was organised. The Nazi attack on the USSR delighted the imperialists who hoped that the fight on the Eastern front would mutually exhaust both sides, after which they could move in and mop up. But they had miscalculated. They had not counted on the planned economy, which, despite the waste and mismanagement of the bureaucracy, managed to increase production and shoulder the burden of the war during its darkest days. The superiority of the plan, combined with the Russian masses hatred of Hitlerism, provided the Soviet Union with the invincible fire-power needed to defeat the Nazi armies, eventually throwing them back to Berlin.

The Second World War reduced itself in essence to a struggle between the USSR and Germany, with the Allies as bystanders. In 1943, Stalin wound up the Communist International as a sop to the imperialists, but they turned deaf ears to Russia's pleas for a Second Front. By 1945, the Red Army had shattered the Nazi war machine and defeated Hitler. This strengthened Stalinism for a whole period.

However, as Trotsky had warned, inherent within the ruling bureaucracy was a desire to restore capitalism in order to pass on their privileges to their offspring. It took 50 years for this prognosis to play out. In 1991, the Soviet Union collapsed and the leading bureaucrats, such as Yeltsin, embraced capitalism. The Stalinists, despite all the sacrifices of the Russian masses, had become the grave-diggers of the Russian Revolution.