This year's National Congress of the Workers International League, held during a historical turning point of capitalism, has marked a new period of development for the organization. 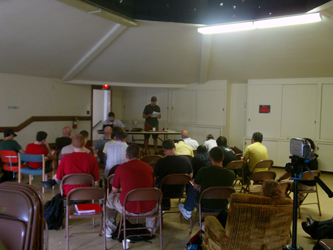 The discussions and activities of the congress that took place over the weekend of May 29th & 30th were the culmination of long months of work, analysis, and input at all levels of membership of the WIL. The result was a noticeable invigoration of revolutionary enthusiasm among the group and for many, a deeper grasp of the tasks at hand. Delegates and comrades from all across the country arrived in Minneapolis, Minnesota the day before the congress began - some having taken 32 hours in a Greyhound or driven 10, 12, 16 hours or more to attend.

The congress was well organized and the order of the discussions was effective in building continuously on the flow of ideas and perspectives. The first day was devoted to discussions on World Perspectives, work in the Mass Organizations, and the work of the International Marxist Tendency. The second day included U.S. Perspectives, building the Workers International League, commissions to focus on work in the areas of immigration, labor, and student movements, as well as reports on press and finances. At every point throughout the discussions there was extensive participation and input from the comrades on a variety of matters and interests.

One major indication of the serious commitment of the membership was the outcome of the finance collection on Saturday evening. Following a discussion on the political significance of finances for the work and growth of the organization, comrades came up with a record of over $10,000 in pledges to the Fighting Fund. 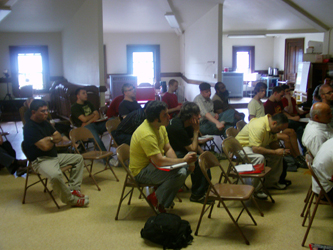 The lead off of the World Perspectives discussion by Fred Weston from the IMT laid the basis for the rest of the conference by outlining the development of the current global crisis of capitalism and the Marxist analysis of the present historical epoch.

Prior to the eruptive impact of the recent crisis, the capitalist class had been able to postpone the regular cycle of crises through a variety of factors including the massive expansion of credit, imperialist domination of foreign markets, mass de-industrialization and anti-labor policies. This allowed the capitalist class to rake in immense profits while maintaining a relatively stable political situation. However now we are coming into a different story.

With overwhelming deficits worldwide and nowhere to expand beyond their markets, the ruling class has nowhere to turn but to place the burdens of the crisis onto the working class. Workers around the world are being faced with unrelenting attacks from the bosses and their governments in the form of layoffs, lost pensions and benefits, cuts in social programs, higher taxes and a whole series of austerity measures.

These are the conditions that are defining this new period of capitalism. Workers are becoming increasingly aware that the system is unstable, incapable of meeting human needs, and that there is no genuine solution short of organizing as a class to fight back. This has major implications for our tasks in the Workers International League and for the labor movement in the coming years.

All in all, it was a successful weekend of meetings that energized comrades and imbued them with optimism in the future of the WIL, the IMT, and the World Revolution. To find out more about the WIL/IMT, contact us and get involved in the struggle for a better world!