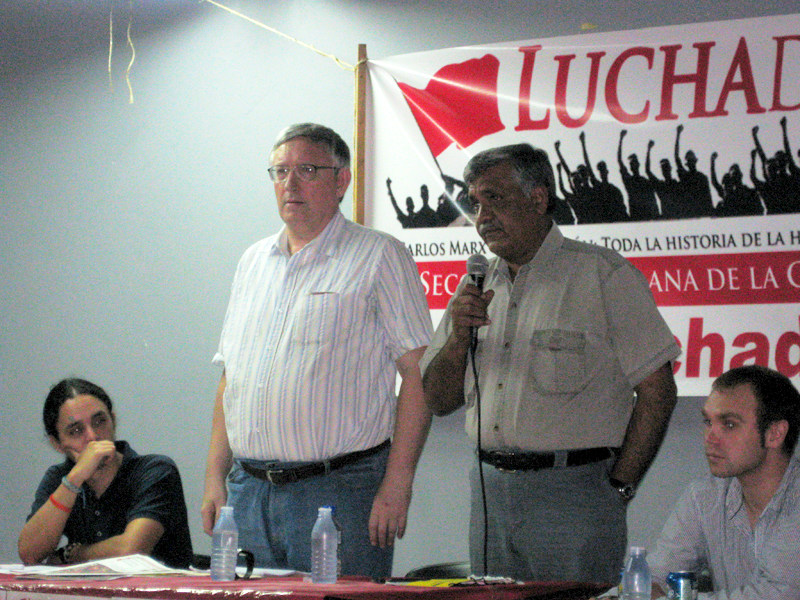 With representatives from 7 different regions, the Venezuelan comrades held their re-founding Congress of the Venezuelan section of the IMT in Caracas, taking the opportunity to launch their new paper, “Lucha de Clases” (Class Struggle). Also present were workers from three occupied factories (INAF, Gotcha and INVEVAL). The comrades have had to deal with very difficult internal conditions over the past year but the mood was one of great enthusiasm and optimism, and they are committed to playing an important role within the PSUV and the Venezuelan revolution.

The Venezuelan comrades of the IMT held their re-founding Congress in Caracas, taking the opportunity to launch their new paper, Lucha de Clases (Class Struggle). The comrades have had to deal with very difficult internal conditions over the past year but have been able to re-found the Venezuelan section of the IMT with great enthusiasm and optimism. The unanimous feeling was that the organisation was now on a qualitative higher level than before. Having purged the organisation of harmful ultra-left and sectarian deviations, they are prepared to play a decisive role within the PSUV and the Venezuelan revolution. 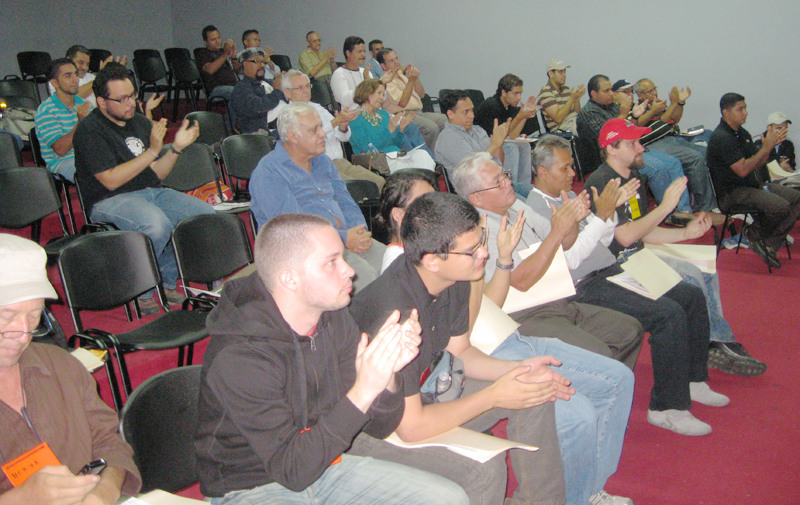 The first day of the Congress was a public conference at the National Library in the centre of Caracas. Over 60 people filled a room at the library to listen to international visitors, Alan Woods and Lal Khan. Comrades from all regions where we are present, including Mérida, Tachira, Bolivar, Maturin, Miranda and Aragua, in Venezuela travelled to Caracas to attend the Congress, some travelling as much as 13 hours to make the trip. There were also international visitors from Brazil, Canada, Great Britain, and Pakistan, who were there to witness this very important event and to send their greetings to the re-founded Venezuelan section of the IMT.

The two-day Congress attracted all sectors of the Venezuelan working class. Everyone from young students to workers from three different occupied factories (Gotcha, INAF, and INVEVAL) came to discuss the prospects of the Venezuelan Revolution and how the Marxists can be best organized to intervene. But the overwhelming majority were proletarians, who also provided the great majority of the speakers from the floor.

Lal Khan opened the conference with a discussion on the political perspectives for Pakistan. Pakistan has been hit heavily by the capitalist crisis and the PPP government has launched a programme of mass cuts and privatisation. Aside from being discredited in this manner, the PPP is facing a crisis in a rise of extreme violence throughout the country. As has been the case for the last few years, the Pakistani state has faced the insurgency by the Taliban in the Northwest of the country. In the rest of the country, the Pakistani workers have been forced to deal with a series of terrorist attacks that have killed thousands over the last year.

Contrary to the perception provided by the Western bourgeois media, Pakistan is not a hotbed for Islamic fundamentalism. The vast majority of the Pakistani masses are made up of the working class, and their interests are not to fight for Islamic fundamentalism but instead, to fight for better working conditions for workers. This is also evidenced by the strength of The Struggle, by far the biggest Marxist revolutionary organisation in Pakistan. Their recent Congress attracted over 2,000 workers, peasants and youth filling the largest hall in Lahore. This report was greeted by tremendous enthusiasm.

World Perspectives and the launch of “Lucha de Clases”

Alan Woods led-off the discussion on World Perspectives. Alan talked about how the bourgeoisie was caught unawares by the worst capitalist crisis since the Great Depression. The capitalist states were forced to enter into unprecedented levels of debt and deficit to mitigate the worst effects of the crisis. 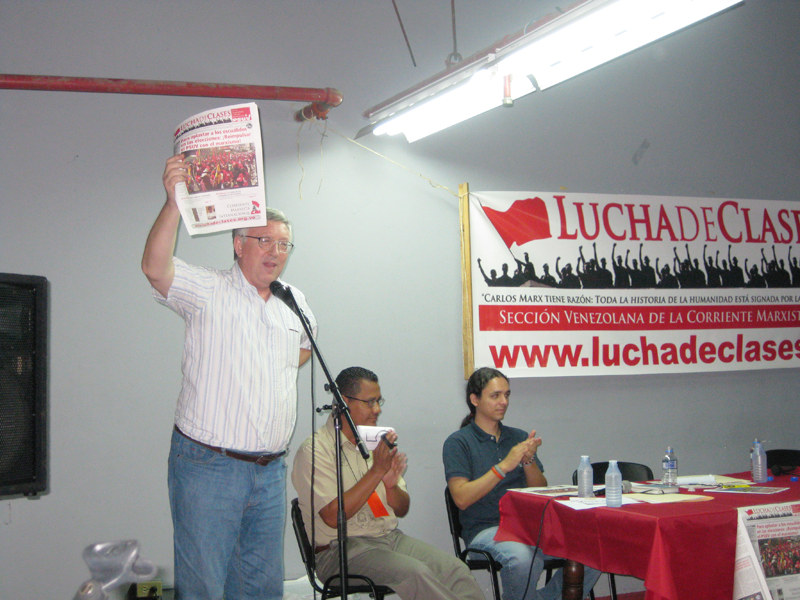 Alan Woods speaks on world perspectives. The public debt crisis is going to be expressed in a tremendous crisis of reformism. The old labour leaders will want to resort to the old methods, of conciliation and negotiation with the bourgeoisie, to try to gain small concessions from the bosses. However, the extent of the debt crisis is going to leave very little “fat” in the system. The bosses are going to try to reverse the gains made by the working class immediately following the Second World War (especially in the advanced capitalist countries). During the crisis itself, in general, there was not a huge reaction by the working class to fight back against job cuts because of fear of losing their jobs. Faced with a deep, sharp recession, the first reaction is workers is often to bow their heads and hope that things will get better. However, as Alan stated emphatically, things will not get better with this crisis. The mood of the working class has already started to change as shown by a series of general strikes in Greece.

After the discussion on World Perspectives, Alan spoke on the launching of the new Venezuelan Marxist paper, Lucha de Clases. Alan repeated Lenin’s statement that the paper is not just a way to get the Marxist message to working class masses; it is a valuable organizing tool and the new Venezuelan paper will help to instil great traditions of discipline into the Venezuelan Marxists. Already, the comrades felt a great connection with the new paper; because of printing difficulties, some of the comrades had stayed until 3am at the printers helping to put together the paper for the launch event. One of the comrades reported how the printers even bonded with the Marxists as Lucha de Clases was being put together! Everyone was very excited about the paper, which has a striking full colour cover and very clean, polished, and modern inside pages. Alan compared it very favourably to the Russian Marxist paper, Iskra, saying that he was sure that the ideas would be just as good, but this was much more attractive.

The paper is coming out exclusively with the effort of the comrades and of workers and youth who are sympathetic to our ideas. This is also true in the financial field. The money to print the paper comes from sales and fighting fund donations. With this in mind, a collection was held where nearly everyone present contributed. The result was the outstanding figure of 4,371 Bolivares (approximately 1,700 US dollars), a huge amount in Venezuela.

The level of enthusiasm can be judged by the following detail: three members of the Caracas fire brigade who were attending a meeting of the tendency for the first time joint the organisation and pledged themselves to set up a cell of the CMI in their work place.

Perspectives for the Venezuelan Revolution 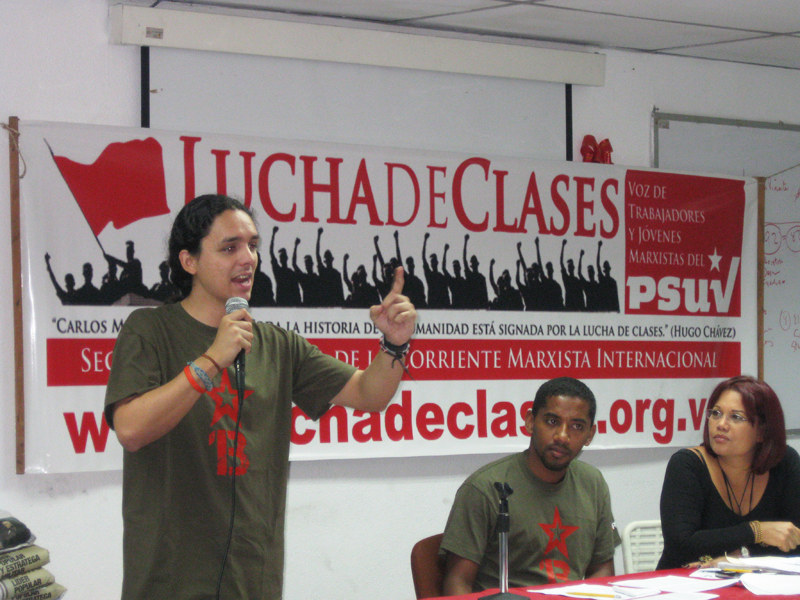 The second day of the Congress opened with a discussion on Venezuelan Perspectives. Over 50 comrades from the section attended the day’s sessions. The comrades heard about how the revolution was entering a pivotal period, especially with the upcoming September elections for deputies to the National Assembly. The contradictions between the needs and demands of the masses and the capitalist economy are reaching their limits. The Venezuelan bourgeoisie is refusing to invest and to develop the productive forces in Venezuela. Over 4,000 private firms had been closed by the bosses in the last decade, showing the capitalists’ bankruptcy. There is a desperate need for the Venezuelan Revolution to fully expropriate the commanding heights of the economy, to organize production around the needs of society, and to place it under the control of the working class.

After the lead-off, 19 different speakers intervened to speak about the perspectives presented, almost all of them workers, including leaders of the occupied factories INAF and Inveval. The session was chaired by comrade Jeny, from the occupied factory Gotcha. One of the interventions pointed out the different mood amongst the masses today compared to four or five years ago. Back then, after the referendum victory and the massive victory by President Chávez in the presidential elections, there was great euphoria and excitement. The masses felt that socialism could easily be built simply through the ballot box. However, an unease has emerged in recent years as people have begun to realize the difficulties of the revolutionary process and that things are yet to fundamentally change. This has the danger of disillusioning the masses; and demoralisation can set in. This is already being seen to a certain extent as the active membership of the PSUV has gone from 2.5-million to one million in one year. But this is only one half of the equation. The main thing is that a critical mood is developing, which creates enormous possibilities for Marxism.

A couple of the speakers responded to the claims by the reformists and even the ultra-lefts, who argue that the workers’ consciousness in Venezuela is not high enough, that they are not ready to take power. The struggles by the comrades at INAF or Gotcha clearly disprove this. This revolution was built by the workers and they feel that it is theirs. All of these so-called intellectuals have absolutely no connection with the daily lives of the masses and have no feeling for the heartbeat of the working masses. 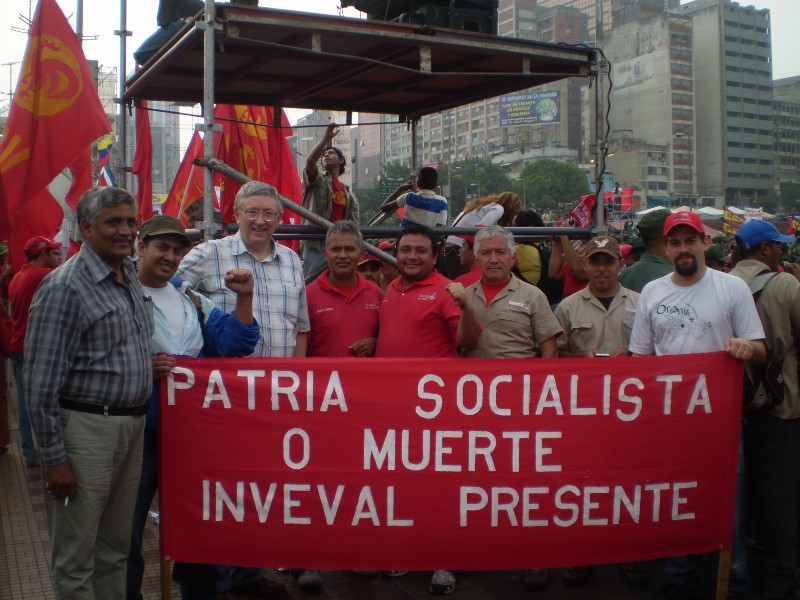 Alan Woods, Lal Khan and INVEVAL workers at the demonstration of the militia. April 2010. The comrades of Lucha de Clases re-affirmed their dedication to building the Marxist wing of the PSUV and connect with the workers that are active in the party. The conference heard from all of the comrades who are active in their spheres of work and activity: universities, community programmes, occupied factories, and more.

Particularly inspiring was the presence of workers from the occupied factories of Inveval, Gotcha, and INAF. The comrades from Gotcha and INAF, in particular, were facing great struggles at their factories that are yet to be legally recognized as being expropriated by the government. Particularly frustrating is the fact that Chávez declared INAF to have been expropriated last November but the Labour Ministry continues to hold up its implementation. Jorge Paredes, the leader of the workers at Inveval, also attended the Congress and related how he and the other comrades were able to fight back against intrigues, slander, and attacks by the ultra-left sectarians. These sectarians had tried their best to sabotage the work at Inveval and had tried to place all of the blame on Jorge. Jorge had won most of the workers over and had been able to regain his position in the plant. Also present was Ramón, the secretary of the union in Inveval.

At the end of last year, a small minority of ultralefts split away from the IMT in a criminal fashion. But there was not the slightest hint of demoralization or confusion amongst the comrades. On the contrary, they regarded this as a necessary purge of sectarian elements who were hindering the progress of the section. All of the comrades spoke passionately about their resolve to build the IMT in Venezuela, to spread the ideas of Marxism within the PSUV, and left more resolved than ever to go back home to build Lucha de Clases. The beautiful new paper was a source of pride for all comrades, who promised to re-double their efforts to spread it throughout Venezuela.

Particularly enthusing was the presence of all sorts of workers and youth at the Congress. Workers and students, young and old, women and men, all intervened in all of the sessions with outstanding clarity on the duties, tasks, and challenges facing the Marxists in the Venezuelan Revolution. Already, even though the section is only a few months old, the comrades have achieved a bigger impact for the ideas of Marxism in the PSUV than they had before the split. The Congress ended with a passionate rendition of the Internationale, and the confidence expressed by the comrades present can prove to be the decisive element in the Venezuelan Revolution.