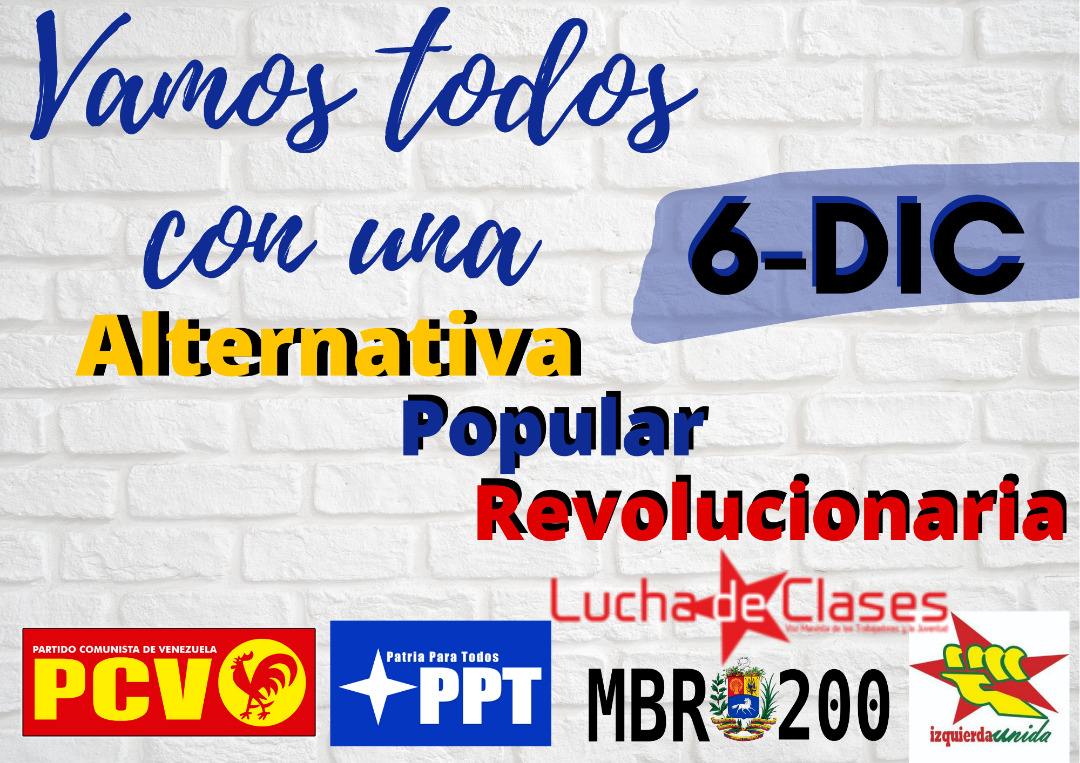 After years of arduous and heated discussions, tactical rearrangements, and adjustments in the political activity of the organisations, the Alternativa Popular Revolucionaria (Peoples’ Revolutionary Alternative) has finally been born in Venezuela. It is an alliance of leftist parties and movements that are determined to mark a decisive break from the anti-worker policies of the national government and to offer the country a new working class, peasant, and peoples’ point of reference for a revolutionary solution to the crisis of capitalism.

This initiative has been promoted by the Communist Party of Venezuela (PCV), Patria Para Todos (PPT), Izquierda Unida (IU), and Lucha de Clases: the Venezuelan section of the International Marxist Tendency. They are four of the six organisations that are part of the Frente Popular Anti-fascista y Anti-imperialista (FPAA: Anti-fascist and Anti-imperialist Peoples’ Front), but in order to promote this new initiative, they have determined to transcend it. To start with, this coalition has been joined by the National Network of Communards, the MB200, Somos Lina, the LGTI Movement, MPA, COMPA and the PRT.

The Peoples’ Revolutionary Alternative is the result of pressure from the rank and file of the left in general to lead a distancing from government policy, which has systematically destroyed the gains of the Bolivarian Revolution, betrayed the aspirations of the workers and the people, bureaucratically asphyxiated all instances of peoples’ participation (combining anti-worker economic cuts with innumerable concessions to the traditional bourgeoisie), while at the same time favouring the emergence of the so-called “revolutionary bourgeoisie” through excessive corruption.

This had an impact on the leadership of the PCV and PPT parties. Where the former decided in the 17th Plenary Session of its Central Committee on 2-3 July to promote the formation of an alternative alliance, which transcends the electoral issue and raises a programme for a revolutionary way out of the crisis; the latter, by majority decision, decided to proceed towards the formation of a coalition with the PCV and the social movements in view of the parliamentary elections on 6 December.

For several years, the Marxist Tendency Lucha de Clases has been consistently agitating on the need to build a new organic alternative on the left, endowed with a revolutionary programme and determined to encourage the masses to challenge the leadership of the PSUV, to defend and promote the various workers’ and peoples’ struggles, rebuild hope for a better society and accelerate the ripening of subjective conditions so that a true government of the workers and the people can be possible. Our political line has proven to be correct in the heat of events, which has kept us firm on all the platforms where we participate, side by side with those who refuse to surrender to despair, to the structural crisis of Venezuelan capitalism, and the bourgeois austerity policies promoted by those from the government who have stained the name of socialism.

Although this initiative has emerged within the framework of the parliamentary electoral situation, it seeks to go beyond it. Despite the programmatic differences and different traditions of each of the organisations, so far the majority will has expressed the imperative that this alliance will participate in the parliamentary elections of 6 December as the first leg of a long race, in which we must build up our forces in line with the sentiment of the workers, peasants, communards, and all sectors of society who fight for their dignity. For several of the organisations that are grouped in the Peoples’ Revolutionary Alternative, unprecedented steps are being taken in the necessary distancing from government policies, but establishing such distancing requires an election that is conducive to presenting a different orientation and proposal to the country.

Lucha de Clases understands the risks implicit in the situation, where the launching of the coalition for an election will attract opportunists and careerists of all kinds, who will try to run candidates without being in agreement with the politics that are being discussed as the basis for this coalition. Due to this, we must call on the organisations that make up the alliance to fight a fierce battle against corrosive opportunism, to advance more rapidly in the clarification and definition of political and programmatic principles, which should guide all organisational and daily decisions (including candidacies). Unlike customary political practice – where opportunism and careerism swarm unchecked – for Marxists, the ideas, traditions, and programme come first, serving as the fundamental basis on which any organisational or practical decision must be defined. It cannot be the other way around. Experience has amply demonstrated the failure of the politics of unity lacking principle or programme: the famous “vente tu” (“come here”, a reference to the co-option of activists by the state) and its dire consequences among the left.

This leads us to define the limits of the alliance, which cannot allow itself to give in to failed reformist or centrist ideas, whose bankruptcy is visible to all in Venezuela and the world. Reformism brought us to the historical precipice in which we find ourselves now. For this reason, we cannot waste any time with those who will try to ride on the aspirations of working people, the revolutionary effort to defend the interests of the poor and oppressed majorities, and murder the hope of the rebirth of the left. We understand very well that the lapses imposed by the National Electoral Council for the registration of candidacies – from 10-19 August – require speed in this matter. But if we truly aspire to build a point of reference that will go beyond the mere electoral realm, political and programmatic definition is urgent and necessary, understanding that we will have to base any unitary decision on the axes that we define and clarify.

Based on the aforementioned, Lucha de Clases proposes debating the consideration of the axes: consistent anti-imperialism and struggle for socialism, as the essential political principles of the alliance. Also, in view of the programmatic debate, we propose that the following points be taken on:

1) Salary equal to the cost of basic nutritional needs for a family.

4) Against speculation and hoarding: workers' and peoples’ control of the production, distribution, and commercialisation of basic goods.

7) Respect for worker and popular sovereignty: no more curtailment of trade union rights, and for the organisation of communes and communal councils!

8) Respect for the fundamental rights of the people: no to the judicialisation and criminalisation of worker, peasant, and popular struggles!

9) Freedom to all workers, peasants, and popular activists imprisoned for actions of class struggle.

We consider the scope of all these points only achievable by dismantling the bourgeois state and advancing towards a socialist planned economy, within the framework of a Revolutionary Economic Emergency Plan:

10) For a direct democracy: worker, peasant, communal, and peoples’ self-organisation.

11) Nationalisation – without compensation – of the industrial monopolies, under workers' control.

12) Nationalisation – without compensation – of all large agricultural estates, under peasant control.

13) Nationalisation – without compensation – of banking and insurance companies.

14) Creation of a Single Import Authority.

15) Against privatisations: renationalisation of the economy.

For Lucha de Clases, every candidate must be subject to a joint policy, a programme, and a commitment to carry it out and not to their free will; or in other words, to pragmatism, bourgeois ideology, and opportunism. The candidacies must be the result of a revolutionary political construction, which cannot view the seats as the goal of the entire effort. Every candidate must be seen as a vehicle for the dissemination of the defined ideas and programme, as well as a spokesperson for the various social struggles. Likewise, if elected, these comrades must seek to combine revolutionary agitation in parliament with the mobilisation of the masses outside of it, understanding that their mission is to reveal the contradictions and the uselessness of this platform to solve the problems of the people, pushing for worker and popular self-organisation, in order for a new power to emerge capable of supplanting the bourgeois state, once the conditions for it are ripe.

Understanding that the corruption of the bourgeois state is based on perks and on the acquisition of living conditions that distance the leaders from the classes they represent, we propose that every candidate assume the commitment of only receiving a salary that allows them to live with dignity, allocating the surplus to the different movements of worker, peasant, and popular struggle, if elected. With a commitment of this nature, the Peoples’ Revolutionary Alternative could be projected as an alliance that demonstrates with deeds, instead of empty words, its will to fight to avoid all the material and ideological deviations of opportunism, which have so disgusted the masses about politics.

Lucha de Clases, as one of the organisations behind this initiative, welcomes the birth of the Peoples’ Revolutionary Alternative. From now on, the path we must take will be full of challenges, threats, and risks, which we can only combat by appealing to the revolutionary conviction that we are on the right side of history.

From our end, the power of the revolutionary ideas that we defend and our willingness to keep our feet firmly placed in the struggle gives us the responsibility of waging the battle for what we believe this alliance should be. In the face of each debate and circumstance, we will present our position in a comradely but firm way, pushing the movement forward with all our modest effort. Obviously, we will not dissolve ourselves in this platform of struggle, as surely no organisation will, but under the policy of “march separately and strike together” Lucha de Clases will strive to show itself as part of the most consistent sector at the forefront of defending the revolutionary ideals in this alliance.