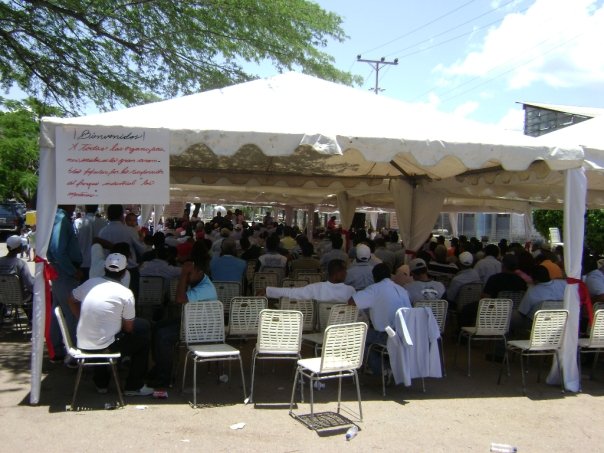 On Monday the SINGETRAM workers informed us that the bosses at Mitsubishi had backed off and withdrawn their plans to close the plant. This is an important victory that demonstrates that militancy, firmness on the part of the workers’ leaders and genuine worker participation and democracy are what are required to win. 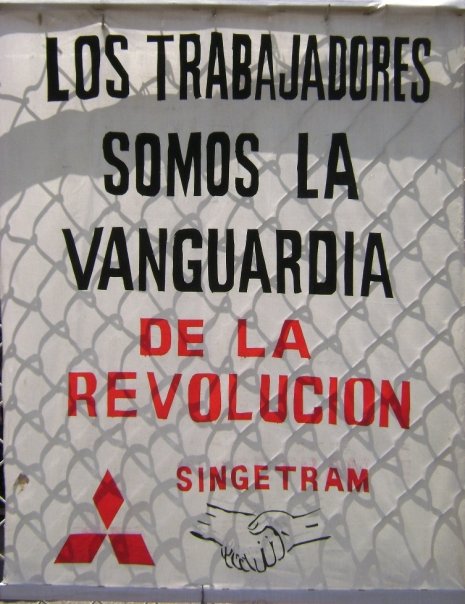 In the afternoon of Monday, 7 September, we received a notice from comrades in SINGETRAM about the withdrawal of the closure on the part of MMC Automotriz management and the relaunching of activities as from 21 September. This victory of the Mitsubishi workers was possible on the basis of the mobilisation, the firmness in defence of the workers and their jobs, and the genuine trade union democracy when discussing the action against the bosses’ lockout and the joint participation of the workers, peasants, students and communities in the establishment of a Socialist Commune which the Socialist Industrial Park launched in the Los Montones industrial zone in Barcelona, bringing together the rank and file of the PSUV against the latest aggression of the Japonese multinational.

The bosses’ lock out

This past 24 August, the company finalised the suspension of operations at the MMC Automotriz plant, located in the Los Montones Industrial Zone in Barcelona, Anzoátegui, paralyzing the assembly line unilaterally in a new attempt to finish off the SINGETRAM trade union. In the best style of the bosses’ strike of December 2002, the management of the automotive assembly plant decided to close the plant, threatening not to resume production, the possibility of abandoning production in the country – all of this based on the supposed anarchy at the company and low productivity of the workers at the plant. The press release published on the same day by AFP stated that “the company, whose assembly plant is located in Barcelona, in eastern Venezuela, has put an end to production due to ‘the extremely low performance’ of its operations in addition to ‘the high level of absenteeism, lack of discipline, aggression and anarchy amongst a group of workers’. As always, the exploiter is trying to place the blame on the oppressed, on the victims of capitalist exploitation, which is what we the workers are.

Clearly, the consistent struggle that the SINGETRAM comrades have advanced for dignified working conditions, for health and safety at work, as well as in defence of jobs and the struggle against outsourcing are the real reasons for the closure. This is about the bosses’ need to break militant and combative trade unionism in order to increase the exploitation of the workers and increase surplus value. This is not only clear for the management of MMC Automotriz but for the Venezuelan bourgeois in general. It is no coincidence that the day after the unilateral closure of assembly plant had been made public, Noel Àlvarez, president of FEDECÁMARAS, declared at a press conference his support for the closure, attacking the union by stating that “what is happening with the assembly plant… reflects a deepening of labour disputes, which has occurred repeatedly at other companies, when a group of trade unionists, instead of defending their interests, start acting politically”, adding “be warned that this will not only affect the economy in the state of Azoátegui, but will also mean that many workers will be unemployed”. In a fit of cynicism, Álvarez even went so far as to say that the bosses are “committed” to trying to improve relations. This, when since 1998 we have witnessed the period of the greatest capital strike in the country and especially in recent years with the strengthening of the campaign of sabotage on the part of the bourgeois of the national economy, now compounded by the current capitalist crisis that has hit the country.

“The increase in unionisation is approximately 300%, most of which have a partisan character, which causes union parallelism and the paralysis of activities, which deeply impacts the country’s productive chain”, stated Álvarez. The central problem for the bourgeoisie, as we have explained various times, is that a product of the revolutionary process is a renewed rise in the consciousness and militancy of the working class, which has also swept away the old union bureaucracy in many cases, who had been submissive to the wishes of the bosses and complacent faced with the cuts to the rights of the workers. According to the bourgeois newspaper, El Nacional, “the union problems have been marked by the penetration of political ideologies that have nothing to do with contractual demands and impact businesses, employees and consumers”. It is precisely this rise in class consciousness and the elements of workers’ democracy that have been generated in many of these new unions that have emerged from the rank and file that these people really fear. It is precisely this questioning of the relations of production that is needed to understand that real power lies in the hands of the workers and that we do not need bosses to produce, because we are the ones who generate wealth. This is the way forward that President Chávez is proposing and which the workers at MMC Automotriz are following.

The labour inspectorate opposed to the closure

The Ministry of Labour immediately declared the actions of the management as an unjustified unilateral closure by the bosses and demanded the immediate opening of the plant and the relaunching of productive activity, all of this while SINGETRAM comrades had demonstrated the false nature of the statement of objections presented by the company. Likewise, the inspectorate, by means of an administrative decision adopted on the same Monday, obligated MMC Automotriz to pay the wages and benefits of the workers, given that the suspension had resulted from the unilateral action of the boss, according to statements in the media. However, management refused the reopening, indicating in a statement that supposedly “the conditions of safety necessary for operations are not present, thus the stopping of activity is justified.” In line with its initial argument for the closing of the plant, the statement rejecting the order to reopen indicated that “leaflets and posters with threats against the lives of various workers who have filed complaints with the Public Ministry, demonstrate that an atmosphere of aggression and violence prevails at the installations of the company with absolute impunity”. However, we remember that it was the management at MMC Automotriz themselves who were involved in bloody repression with the murder of comrades Pedro Suárez and Javier Marcano, as well as several bullet wounds to others when using a Anzoátegui first response police team (riot police) they tried to retake control over the plant with blood and fire this past 29 January.

In terms of the accusations of MMC Automotriz management, comrade Félix Martínez, general secretary of SINGETRAM, had already explained that while an agreement had been reached on 21 March with the company to produce 60 vehicles per day, “this was conditional on MMC fulfilling the payment of benefits. Instead, workers were harassed, causing violence. We want to stress that what is happening inside the company is the sole responsibility of management, which is incapable of responding.” He even explained the serious humanitarian situation which was caused by management when they suspended “rehabilitation treatment for 125 workers with occupational illnesses”, comrades who have risked their health producing wealth under conditions of super-exploitation for these parasites, who now want to throw these workers out like junk.

This conflict has again demonstrated the leading role that the working class can and must play in the revolution and the importance of workers’ democracy in union organisations as well as how these can unite and promote the creation of organs of revolutionary struggle which unite not only the workers in one particular company, but also concretise the unity of the class through concrete struggle and come closer to the other oppressed sectors. Already since 25 August, when the MMC Automotriz workers met with representatives from the Ministry of Labour in Anzoátegui to start the legal procedures in order to counteract the claims of the bosses SINGETRAM announced that the way to struggle against the claims for closing the plant would pass through the united action of the workers in the Los Montones industrial zone in Barcelona together with the Communal Councils in the surrounding areas, as well as the participation of peasants and students. 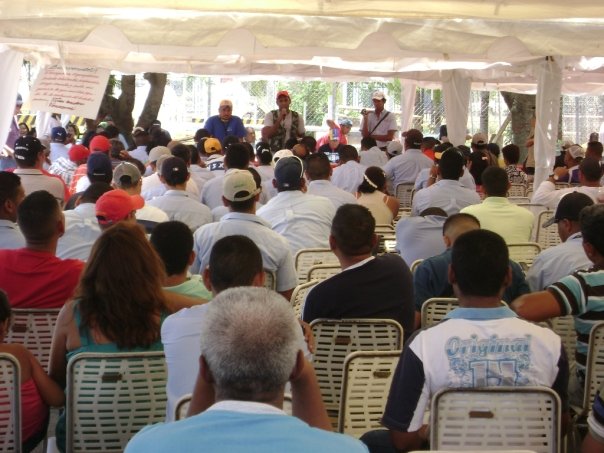 People’s Assembly Thus, on 28 August a large People’s Assembly was held in the Los Montones Industrial Zone in which various unions in the zone participated, as well as surrounding communal councils, explaining the situation of the bosses’ lock out and proposing the idea of creating a Socialist Commune in the zone such as the President of the Republic had proposed which, from the rank and file and in an organised manner should concretely respond to the problems facing the workers in the area as well as in surrounding communities. Preparations were made to establish a large assembly held on 5 September in order to form a team for the promotion of the Socialist Commune, bringing together many unions in the area as well as Communal Councils, peasants and students.

More than 750 participated on Saturday in a further People’s assembly with the participation of representatives of most of the unions active in the industrial area, communal councils from Barcelona and even some from Puerto la Cruz, comrades from the National Peasants Front Ezequiel Zamora, and students from the UNESR and the UDO universities. The mood was one of enthusiasm and militancy. The discussion covered not only the problems of the workers in the industrial area, particularly those of MMC, but also the struggle of factories like Vivex, which has been occupied for more than 8 months. Amongst those attending, 50 people committed themselves as part of the Committee to Promote the Socialist Commune of the Los Montones Industrial Park, with the aim of starting to solve the problems of the area.

Yesterday in the afternoon, the Singetram comrades informed us that the bosses had abandoned the lock out and that a date had been agreed for September 21 for the reopening of the plant. According to the note published today in the bourgeois paper El Tiempo: "The assembly plant announced the resumption of operations for September 21, pointing out that a number of legal decisions open the way to the restoration of the safety conditions needed to operate". The El Tiempo article further points out that, "without offering any details of the agreement reached between the company and the workers, management points out, in a statement, that it will continue its plans to improve health and safety, and that it hopes that a legal resolution preventing the circulation of propaganda inciting violence within the installations of the plant will be complied with".

The truth is that the bosses have had to abandon their plans as a result of the mobilisation of the workers, not only of the Mitsubishi workers but from all over the industrial area, linking up with the PSUV, the Workers’ Socialist Front, and also because of the unity of action which was achieved in two peoples' assemblies with the participation of representatives of students, the peasants’ movement and the local communal councils. The task is now to continue the organisation of the revolutionary rank and file, to develop the Workers’ Platoons of the PSUV, so that the workers and the communities are ready to face new attacks on the part of the MMC multinational and also to promote the setting up of the Socialist Commune of the Los Montones industrial park, to solve the problems of this area which has been abandoned by the capitalists and the state bureaucracy.