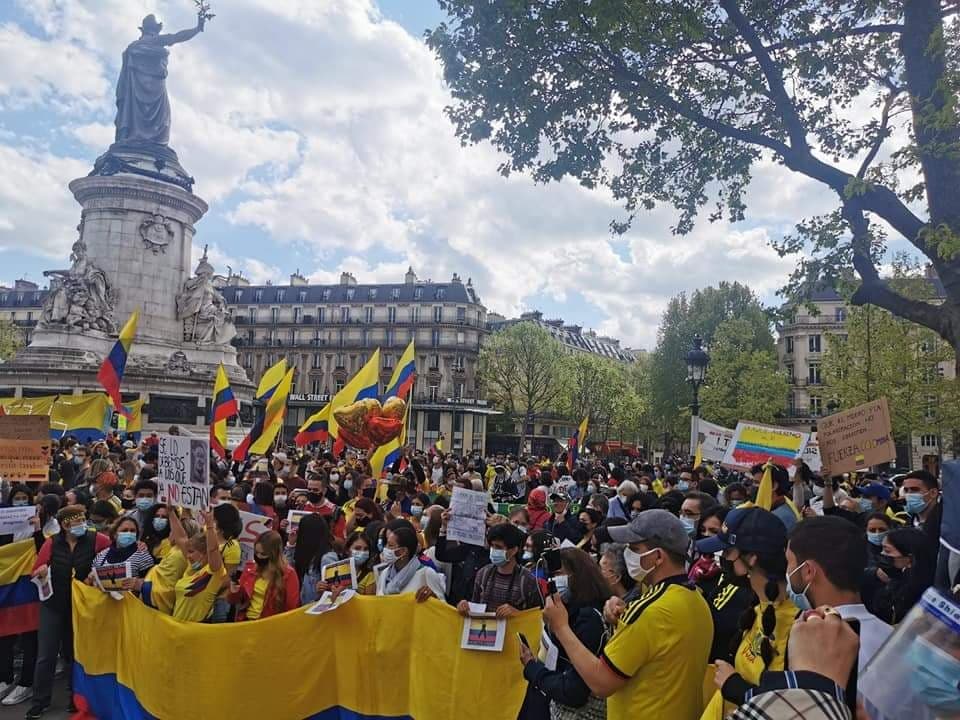 All over the world, solidarity protests have been organised in support of the Colombian workers and youth, who are locked in battle with the reactionary regime of Iván Duque. Comrades of the IMT have intervened in these demonstrations to show their support for this inspiring struggle.

Demonstrations in solidarity with the struggle in Colombia have broken out across the Spanish State. On 6 May, the comrades of the IMT in Madrid attended a rally called by the collective of Colombians in Spain at the entrance of the Retiro Park in Madrid, against the government of Ivan Duque and the repression carried out by the state security forces in Colombia. 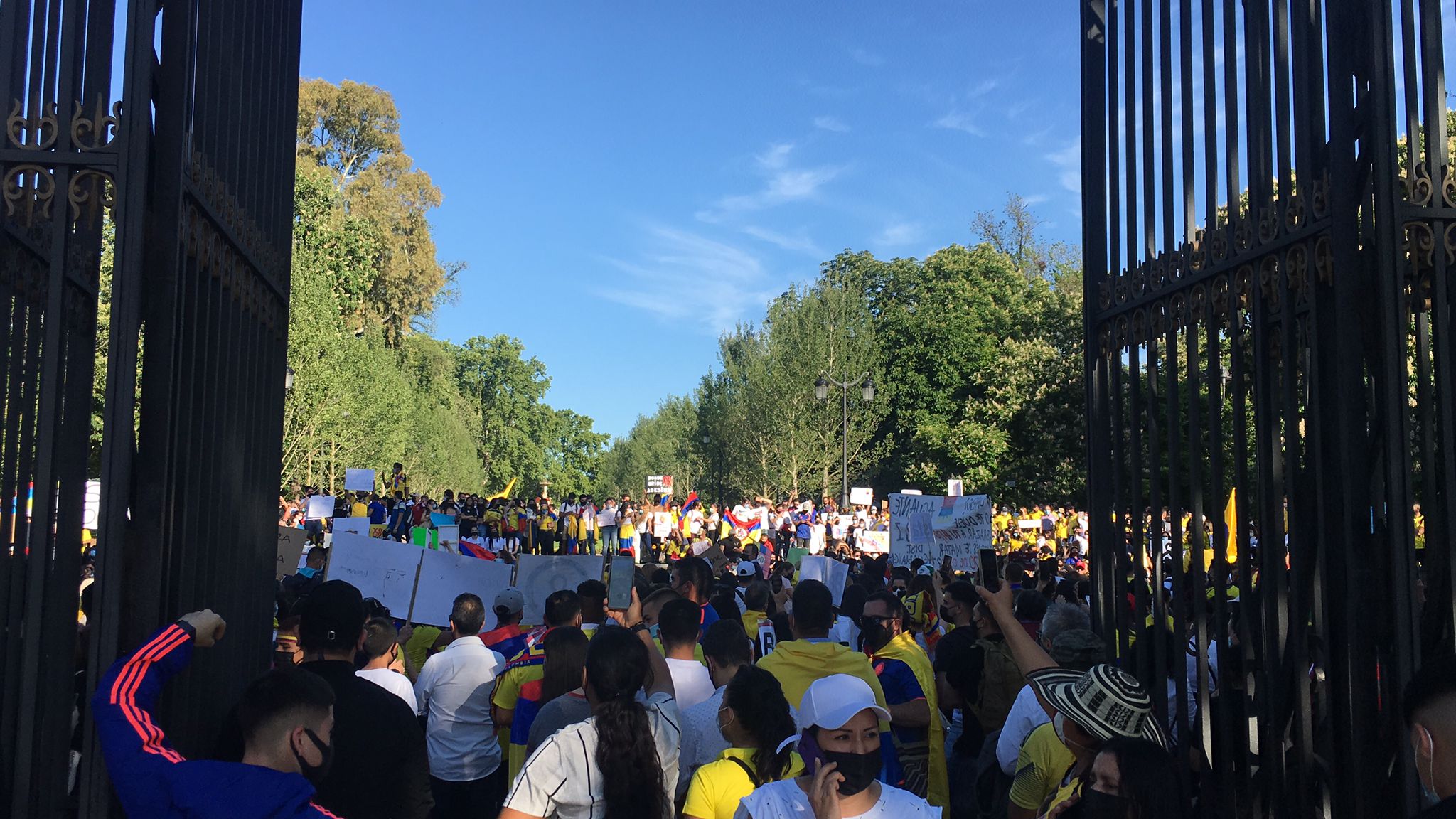 From the moment we left the metro, the turnout was immense and exceeded all expectations, with around 1,000 people taking part, and the Puerta de Alcalá dyed in the colours of the Colombian tricolour. The atmosphere was intense, with the demonstrators carrying flags and posters with different messages such as: “They are killing us", “Colombia anti-uribista", “Uribe genocide” and many more.

As the afternoon progressed, the turnout increased even more, with a notable presence of Colombian youth, who see how their compatriots are being killed as a result of fighting for their rights. Salsa bells rang out to the rhythm of “Uribe paraco, el pueblo está berraco” (Uribe the paramilitary: the people are angry!) and “El pueblo unido jamás será vencido” (The people united will never be defeated), highlighting the mood of the Colombian working class.

Their anger was focused on Álvaro Uribe, reactionary ex-President and the shadow power that controls the government of Iván Duque like a puppet. 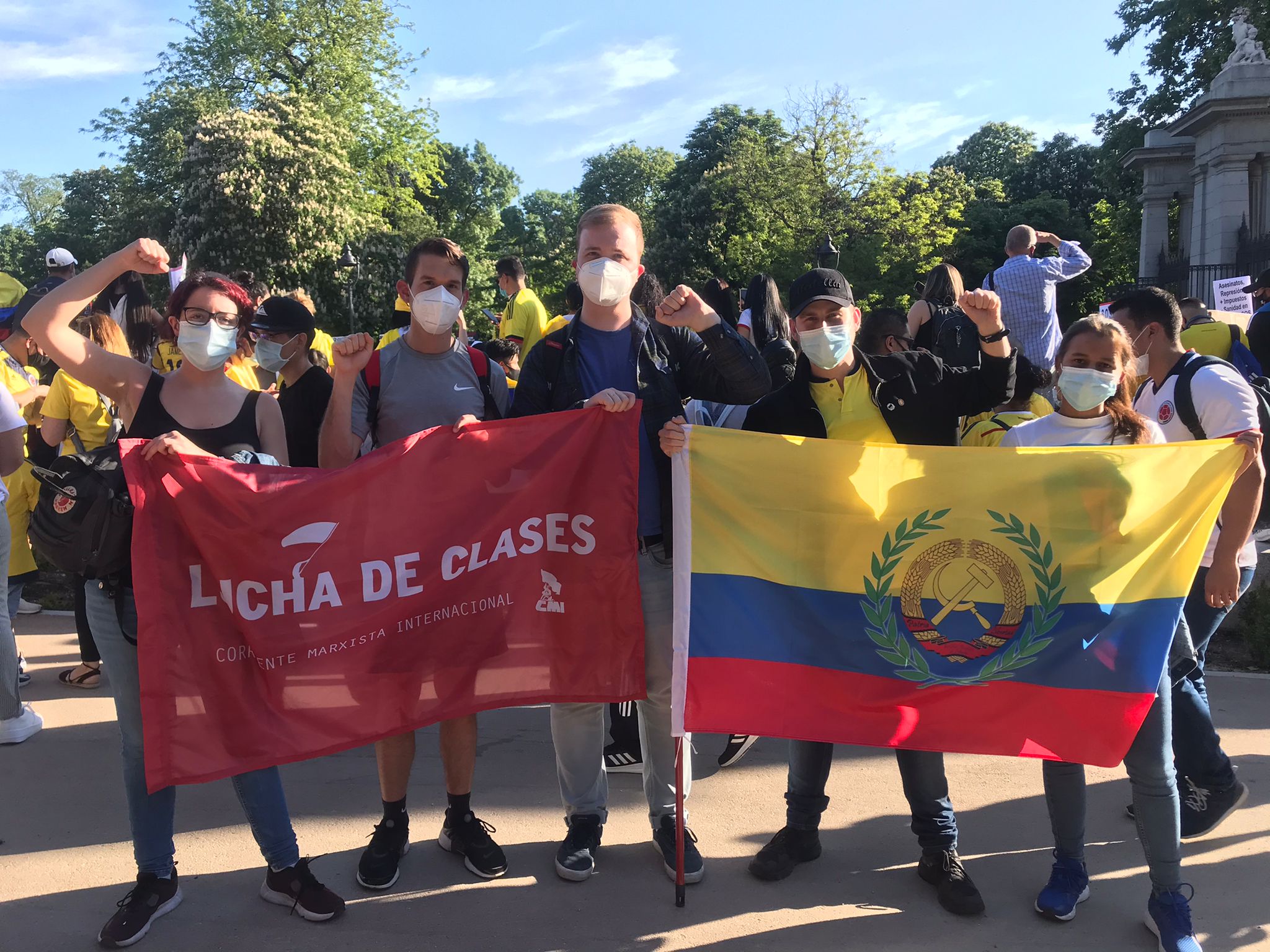 Most Colombians in Madrid live in the neighbourhoods with the lowest per capita income and occupy the most precarious jobs, like the rest of the immigrants in the capital, and use their wages to help their families financially back home in Colombia. Their justified class anger and bonds of solidarity with their brothers at sisters in Latin America were on full display.

On 7 May, a rally in support of the national strike took place in Granada. The rally brought together around a thousand people, the vast majority of them Colombians and children of Colombians living in the province of Granada, along with several dozen other Latin Americans and Spaniards. 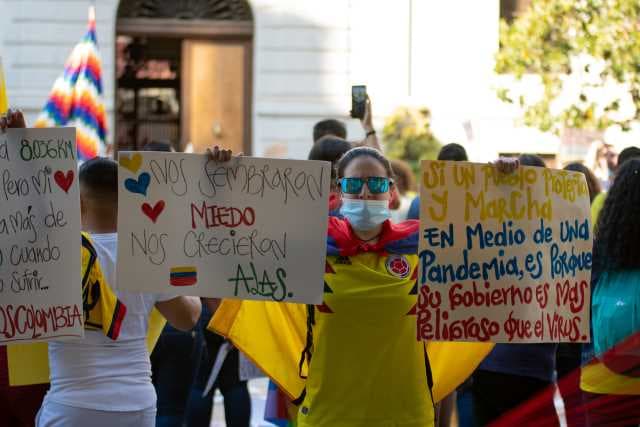 There was a large presence of young people. The rally was not officially registered, but the level of organisation at short notice, which included printing banners and sticking posters on the lampposts in the square, was very notable. 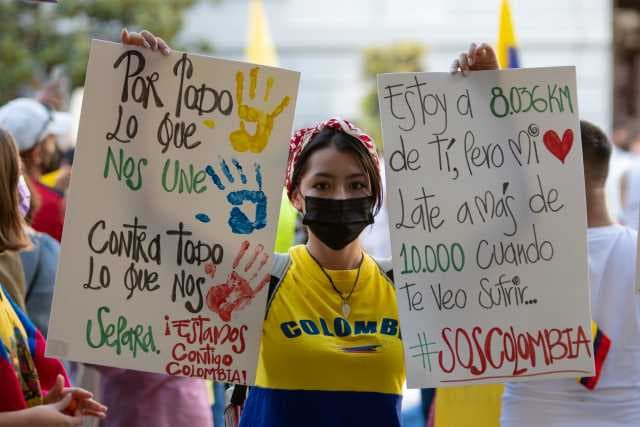 On 8 May in Seville, comrades of the IMT joined a rally attended by 200-300 people, with the participation of Colombian collectives from different parts of Andalusia, who took the microphone to denounce the situation in the country, and the brutal repression of the people by the regime. The mood was very radical and enthusiastic, with slogans, music and singing. 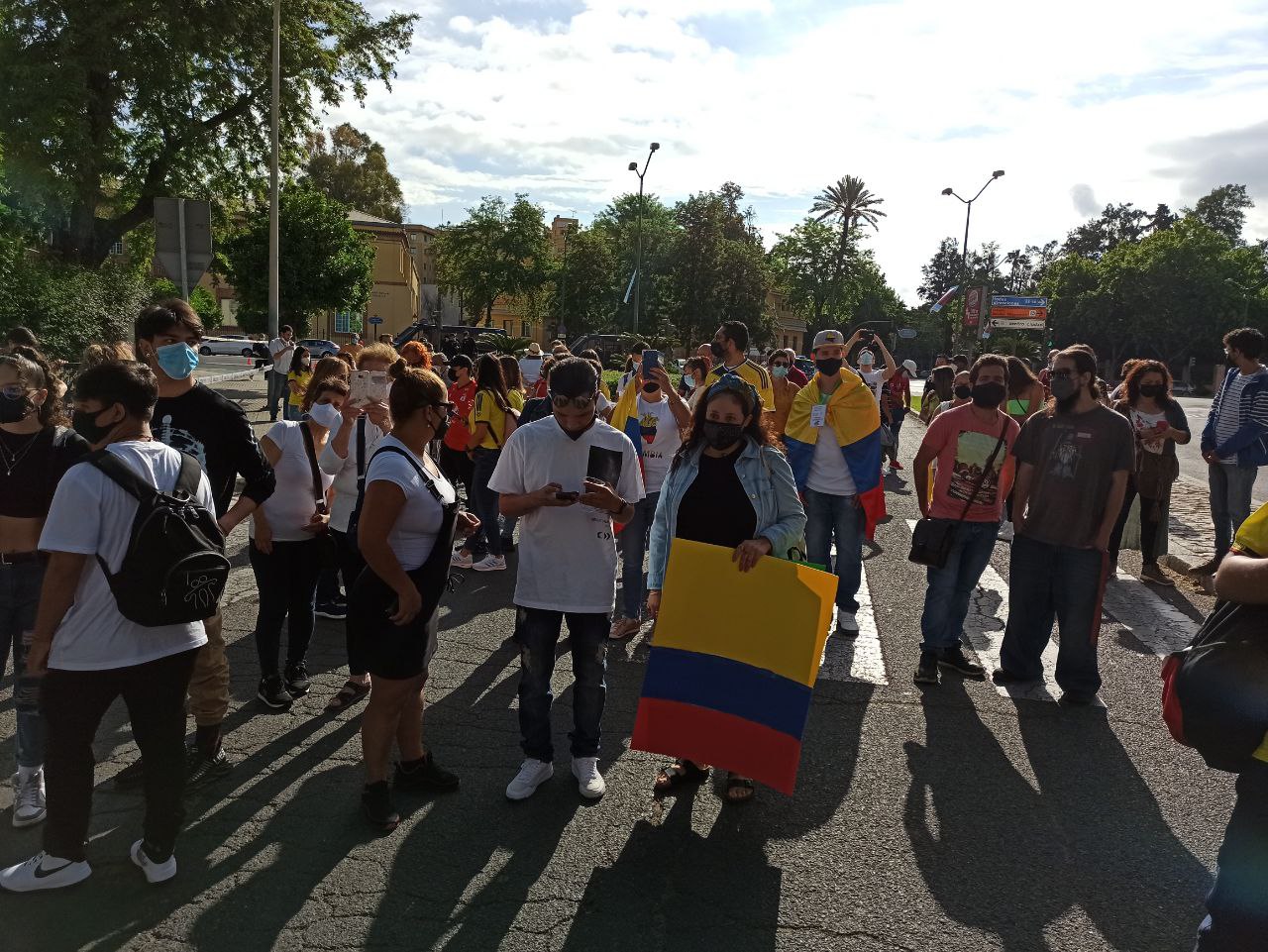 In the Basque Country and Navarre, crowds of thousands of Colombians and children of emigres also raised the slogan: “Uribe paramilitary: the people are angry!”

The people are angry at the attacks on the already very low standards of living, the brutal repression of any struggle to improve it, the murder of social leaders, and the lack of any future, which has forced so many workers and their families to emigrate. The crowds also shouted “Resistance", giving encouragement to those who are struggling against the government of Duque, and condemning the repression. 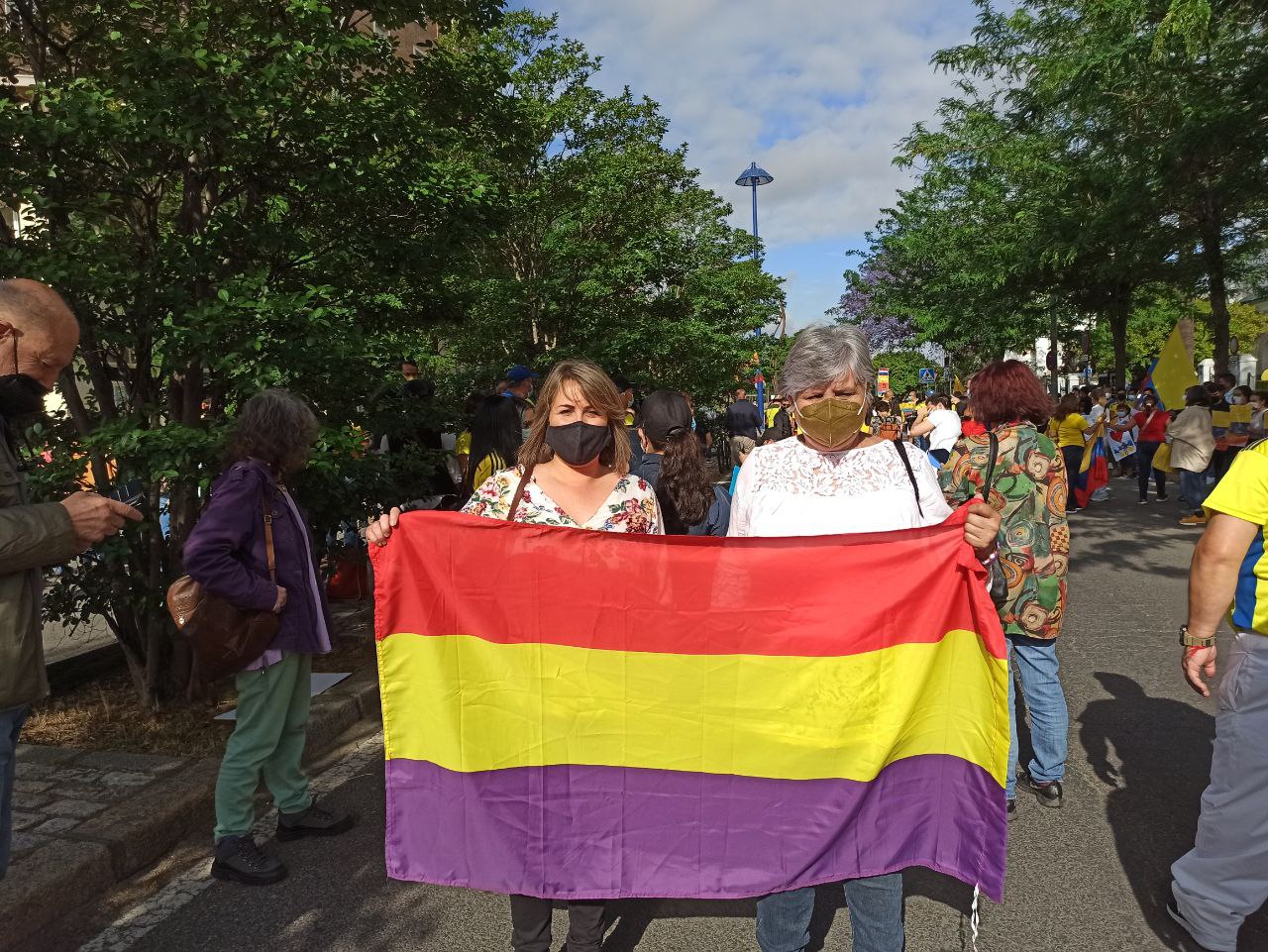 IMT comrades participated in the demonstration in Vitoria-Gasteiz, which was about 2,500 strong, mostly consisting of young people, who chanted slogans with inexhaustible energy, stimulated by the advance of the struggle in Colombia since the end of April, where the strength of millions in the streets have managed to repel Duque’s brutal tax package.

The determination, energy and enthusiasm of the demonstrators in the Basque Country and Navarre is a boost to the struggle of their class brothers and sisters, showing their confidence that they will overthrow the criminal Colombian government. 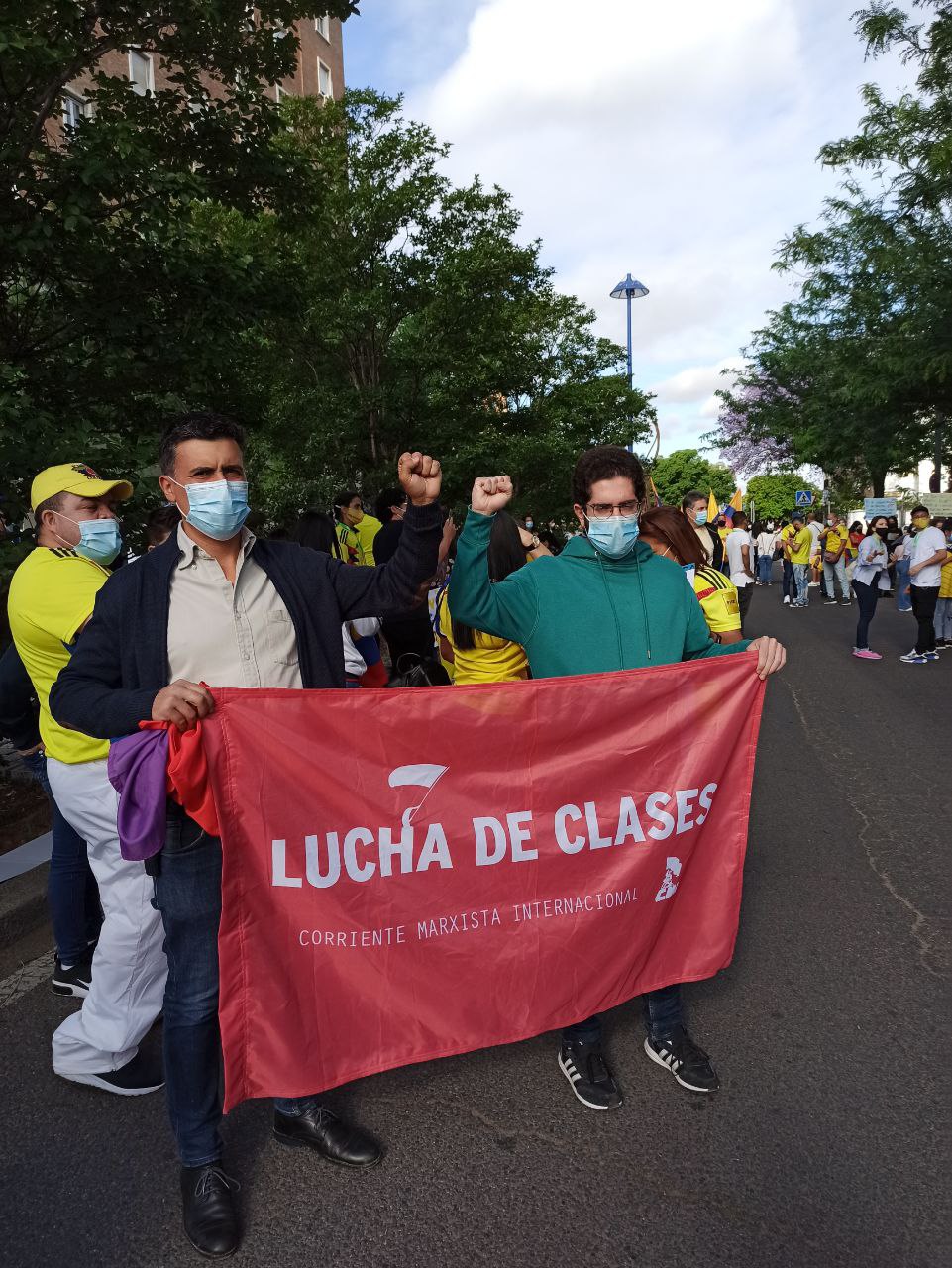 We can see a growing discontent among Colombians and an increasingly radicalised youth, both in Spain and their home country. All that is missing is the revolutionary spark with a clear class perspective that will ignite the urban proletariat and the Colombian peasantry, so that the deaths thus far are not in vain, and the desired goal is achieved: a Colombia without exploitation, without poverty, and without violence.

A socialist revolution in Colombia can light the fuse in other Latin American countries. Marxism is international and we offer the maximum support to all the Colombian comrades who are fighting against Duque. It is time for the working class to unite in all countries and fight side by side to overthrow this system that only brings exploitation, misery, hunger and slavery.

The Belgian section of the IMT, Révolution took part in a rally in Brussels, attended by many young Colombians and their families, and organised on the initiative of Intal (an NGO) to support the social rebellion against Ivan Duque's government and to denounce the vicious repression meted out against the people. 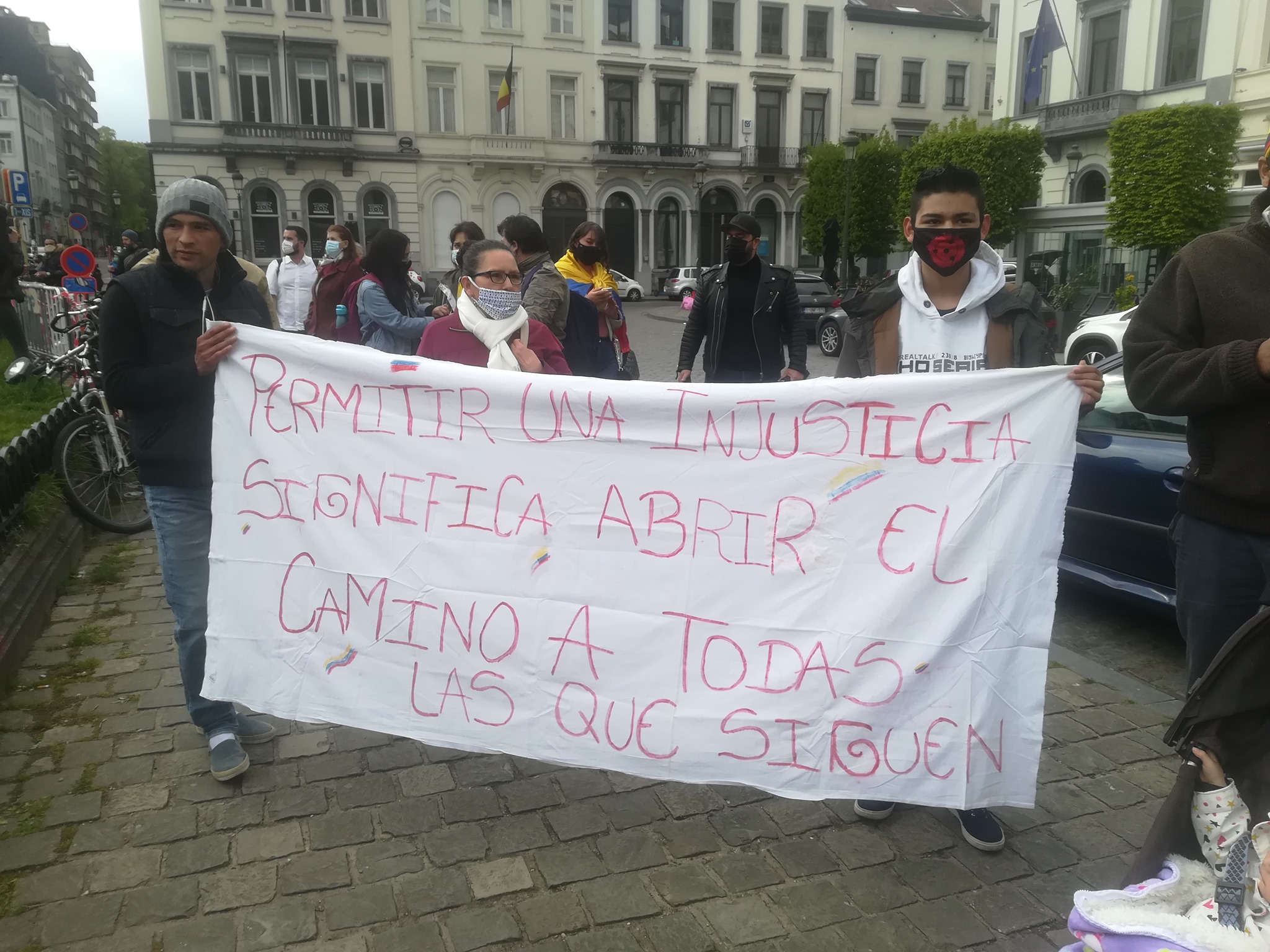 On 8 May, the Colombian community in Paris held a rally in support of the demonstrations in Colombia. More than a thousand people gathered in the Place de la République to reject the repression of the Colombian state against the demonstrators of the national strike. 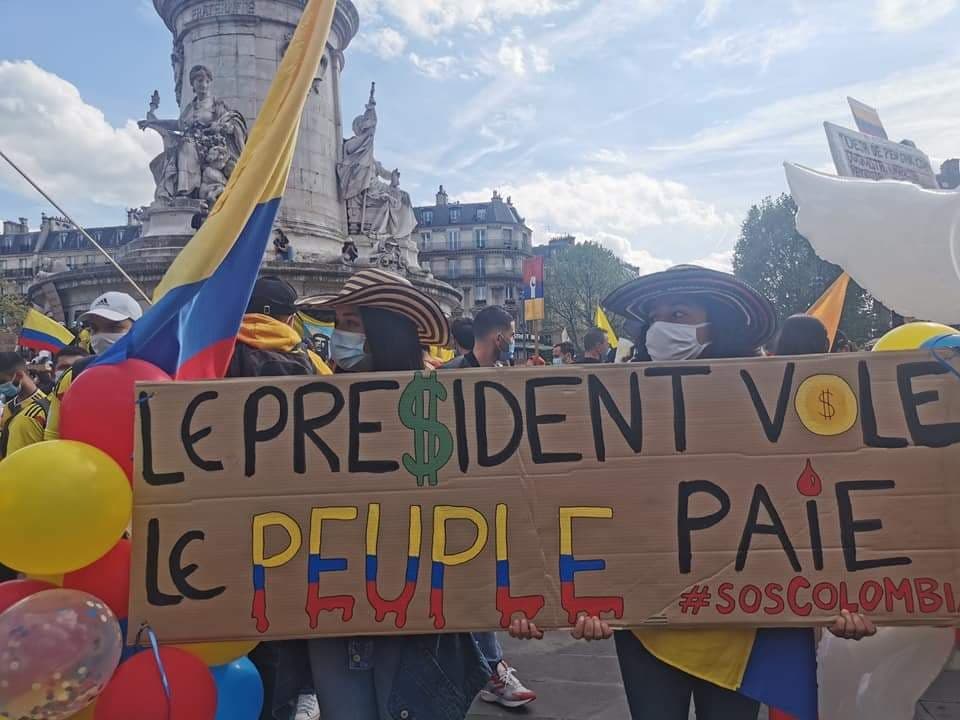 The rally brought together activists from Colombia Humana, but above all Colombians without any militant traditions. The atmosphere was very combative and joyful. The chants expressed a profound rejection of the government and of Uribism.

In London and some other cities in Britain, there have been daily protests against state repression and in solidarity with the Colombian people. Comrades attended a large demonstration at Trafalgar square, involving hundreds of protesters; as well as weekday pickets outside of the Colombian embassy.

The embassy pickets are lively affairs, with music, militant speeches, loud chants of “Viva EL Paro National” and “stop the state killings in Colombia.” Our comrades handed out both their paper, and a leaflet in the Spanish language, which went down well with the demonstrators.

And on Saturday 15 May, a joint protest is planned, linking demonstrations against Israeli aggression against Gaza with solidarity protests with the Colombian masses, with a plan to march from the Colombian to the Israeli embassies.

This demonstrates that the workers and youth of the world understand the common root of all state violence and oppression, and have an instinctive drive towards forming bonds of solidarity across national borders for the common liberation of all repressed peoples.