Share
Tweet
On the weekend of May 13-14, some 30 members and supporters of the Workers International League gatehered in St. Louis, Missouri for the 2006 National Congress. Guests included former members of Workers Action (who have now joined the WIL), and members of the rank and file UAW "Soldiers of Solidarity" movement. 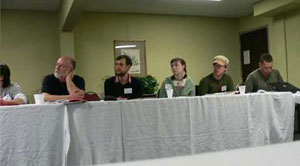 On the weekend of May 13-14, some 30 members and supporters of the Workers International League gatehered in St. Louis, Missouri for the 2006 National Congress. Guests included former members of Workers Action (who have now joined the WIL), and members of the rank and file UAW "Soldiers of Solidarity" movement.   The purpose of the congress was to discuss political perspectives for the coming year, and on the basis of this, to discuss and map out our organizational strategy, tactics, and orientation.

This years' congress saw record attendance, including a number of older, experienced activists who were able to share their experience with the younger members.

The first session started with a discussion on World Perspectives, focusing on an analysis of the rising tide of social upheaval spreading over the globe. Specifically, we discussed quite a bit about the general shift to the left in Latin America, with particular attention paid to Venezuela and Bolivia.  The world capitalist system is in crisis, and this is reflected in the convulsions we see at all levels and in all countries.  We begin our discussions with World Perspectives because as Marxists, we are internationalists above all. 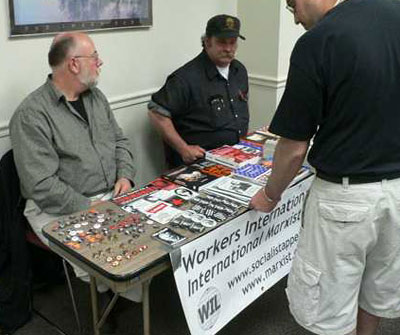 The next topic of discussion was US Perspectives, introduced by WIL National Secretary John Peterson. The convulsions we are witnessing around the world are the result of the long-accumulated contradictions of the capitalist system, beginning with the underlying weakness of the economy. Nowhere is this more true than in the U.S. In addition to discussions on the economy, the political situation, and labor movement, we discussed the importance of the growing Immigrant Rights movement which is picking up momentum all across the country.  The effects of all of this instability on the consciousness of working people was a major focus. The U.S. Perspectives document will be available online at www.socialistappeal.org shortly.

There was a high political level in all of the discussions and all were in agreement that the situation we are facing truly is "Socialism or Barbarism!"  But far from pessimism, those in attendance were filled with optimism and revolutionary enthusiasm for the socialist future of humanity.

The congress attendees then headed to St. Louis University for a public presentation by Hands Off Venezuela International Secretary Jorge Martin titled "A World in Revolt". A major theme of this presentation was that due to the crisis of capitalism, we have entered an epoch of wars, revolutions, and counter-revolutions, with the sharpest expression of this process in Latin America.  Click here for a report on this event and an audio file of Martin's speech. 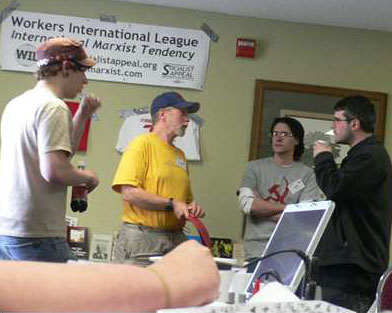 At the event, there was a table full of Marxist books produced by the International Marxist Tendency on subjects like the partition of India, the History of British Trotskyism, and Bolshevism: the Road to Revolution.  There was a lot of interest in these materials and many copies of Socialist Appeal were sold.

The following day, the discussions focused on organizational goals and tasks that flow from the discussion of political perspectives that took place the day befoore. There was an extensive series of reports on work in solidarity with Immigrants' Rights. Across the country, members of the WIL are participating energetically in the movement for immigrant rights, around the demand for documents and unconditional amnesty for all workers in the U.S., regardless of their national origins.  This work will be continued in thecoming period, and as part of this work, the WIL's new Spanish-language paper, El Militante Sin Fronteras, will begin production soon.

The congress was closed with the singing of "The Internationale" and "Bandera Rossa". In the end, many were sad to leave such a successful and enthusiastic congress, but they were also tremendously hopeful for the future of the struggle. It is important that everyone that attended take home the important discussions and lessons to the rest of the organization, and that we work locally towards our mutual goal: a bright new future for the United States and the world. Forward to Socialism!