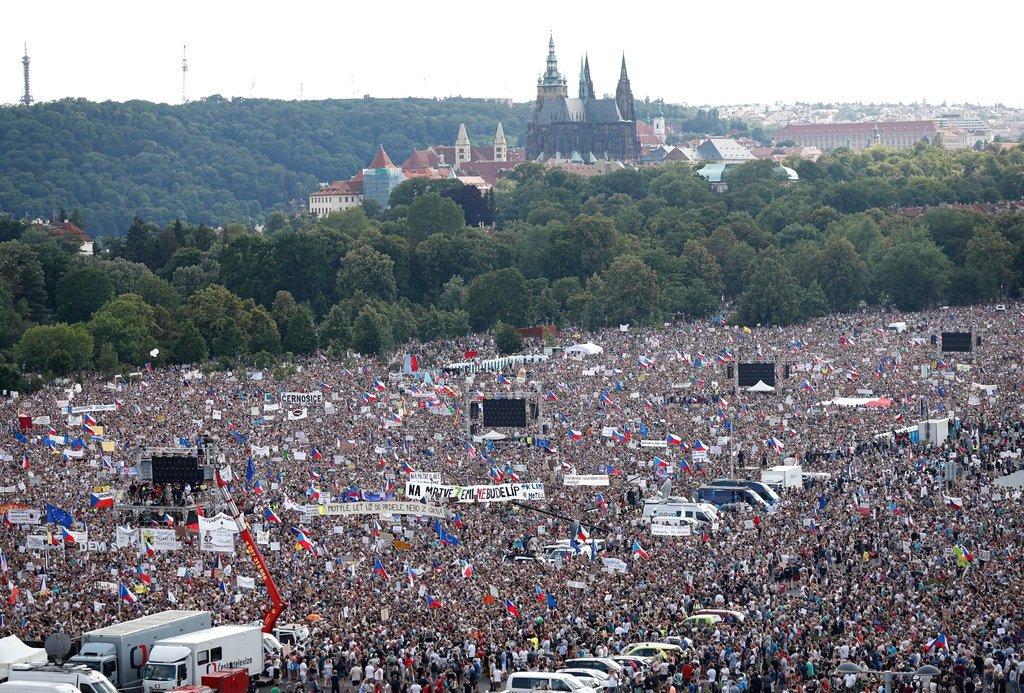 In the last period, the Czech Republic seemed to be a relatively politically stable country in the eyes of the global ruling class; with sufficient economic growth, very low unemployment, and even rising wages. This relative stability, sustained mainly by strong German investments, propped up the support for oligarch prime minister and second-richest Czech, Andrej Babiš, and his Berlusconi-style party ANO 2011. But things have changed, and the masses are moving.

Babiš came onto the political scene with the image of a successful businessman and the promise of saving the country from corrupt politicians by running the state as his successful company for the people’s common benefit. But now, after a series of embezzlement and corruption scandals after becoming prime minister in 2018, the masses are starting to realize that Babiš´s political activities only serve to enlarge his personal profits. The latest scandal of EU subsidy fraud provoked mass outrage and 250,000 took to the streets of Prague this Sunday, making it the biggest demonstration against the government since 1989.

How Babiš rose to power

When Babiš made his first appearance as a politician, before the parliamentary elections in 2013, he initially gained his support from a layer of the bourgeoisie, frightened by the strength of the masses after the previous stormy period that completely destroyed the trust in the traditional right-wing parties and smashed their government. Back then, the Social Democrats conquered 37 percent in voting preferences, and the Communist Party 20 percent. Heavy investment in Babiš’s own campaign - supported by buying radio stations and newspapers, made possible thanks to his position as an owner of the monopoly agricultural company Agrofert - granted him second place in the parliamentary elections of 2013, behind the Social Democrats. His demagogic campaign aroused in many the feeling that, as he is already rich, he would not feel the need to rob the people, as the previous unpopular right-wing government did. But the problem was that this wealthy oligarch wanted even more money and power.

After the Social Democrats created a coalition government in 2013, with Babiš as Minister of Finance, he immediately started exploiting his position to conduct financial operations that supported his own businesses. This consisted mainly of using state subsidies for his companies, which rose dramatically when he took office. This led to the passing of the Amendment to the Conflict of Interest Act in 2017, which forced Babiš to put his companies into a trust fund, but in practical terms, he is still the owner. At the same time, when Babiš needed the money for the state budget, he didn’t attack workers directly by imposing cuts, but introduced higher pressure on the petty bourgeoisie and his market competitors. The introduction of electronic registration of sales provoked ferment among the petty bourgeoisie, which have since become Babiš’s most-outspoken critics amongst the Czech population.

Babiš presented himself as a successful businessman and promised to save the country from corrupt politicians. But now, after so many scandals, that image has been shattered / Image: BEIA

The Social Democrats in government proved themselves incapable of solving any of the problems in Czech society, and Babiš won the elections of 2017 with a landslide victory. The Social Democrats scored 7.3 percent and the Communist Party 7.8 percent, both extremely bad results. The main problem Babiš had was that he did not have a majority in parliament, and at first nobody wanted to support him in government. The Social Democrats and the Communist Party were acutely aware at that time that supporting him would be a betrayal of the very foundations of their party programmes.

But as the parliamentary crisis was reaching a point where new elections were possible, the Social Democrats and so-called Communist leaders hastily stepped in to rescue Babiš. The reason for this was that they feared an even worse election result. Czech president Miloš Zeman played his part, loyal to his long-term alliance with Babiš, dating back to the end of the 1990s, when Zeman, as leader of the Social Democrats, supported the tycoon’s businesses by favouring his bids to privatise state companies like Unipetrol.

The new Babiš government was created in 2018, together with the Social Democrats and with the support of the Communist Party, and immediately became mired in all sorts of scandals, especially linked to the prime minister himself. Babiš has been dismissing all these accusations as “fake news”, but his claims are less and less credible. The latest scandal was the accusation of fraudulent misuse of EU subsidies to farming, in favour of Agrofert. On top of this, there was the case of the abduction of his own son to Crimea (revealed by media sources not owned by Babiš) to prevent him from speaking in court about his father’s crimes.

These scandals brought thousands of people to the streets, demanding Babiš’s resignation. In parliament, the right-wing opposition passed a request for a no-confidence vote in the government. However, once again, the Communist Party and Social democrats came in to support Babiš, to preserve his rule. The price for this betrayal was yet another defeat in the Euro elections, where the CP achieved only 7 percent and the Social democrats 4 percent (falling from 14 percent in 2014).

A decisive split in the ruling class is developing, as Babiš wants all power for himself. The CP and Social Democratic parties are supporting him with the hope that something will change before new elections are called, in the hope of recovering from the worst election defeat in their history. The parliamentary opposition to Babiš is revolving around the right-wing bourgeois parties, supported heavily by the petty bourgeoisie, as they are in open conflict with Babiš.

Babiš is obviously using this to his advantage. As long as the protests against him are organised by petty-bourgeois elements with the support of right-wing parties, he can point his finger at the contradictions between these parties and the workers’ interests (which he understands very well), to prop up his support in elections. He says: “Vote for me. Or do you want those right wingers to came to power again?” This is something that is keeping him in power despite the mounting scandals.

The masses are fed up

Drunk on his latest election victories, he underestimated the power of the masses, who are already tired of his scandals, and started to influence the court system through his puppet Minister of Justice, Benešová, to protect himself from any prosecutions. At the same time, the European Commission audit is demanding the Czech Republic pay back the subsidies that Babiš used without justification.

Mr Babis is facing a criminal investigation over alleged fraud, and is also the subject of an EU conflict-of-interest investigation. #MilionChvilek #prague https://t.co/VEOzFNAWld pic.twitter.com/9ijCeRPJJ5

This is now stimulating the biggest wave of civil resistance since 1989. Hundreds of thousands are demonstrating in the streets against the corrupt and scandal-ridden Babiš government. These demonstrations are still led by reactionary, petty-bourgeois elements, that are even demagogically portraying Babiš as a “Communist“ and a “Bolshevik” for his hold on state power, for his previous career as secret police agent (under the code name “Bureš”), and his KSČ membership at the time, as a company bureaucrat in the pre-1989 regime. This makes the CP support for him an even-deeper betrayal, which is increasing confusion amongst the working class as a whole. However, workers are participating more and more in these demonstrations, as they have already had enough of Babiš’s obscene and fraudulent wealth; his employing people for the lowest wages in the worst conditions; and the environmental devastation caused by his agricultural company planting rapeseed everywhere. 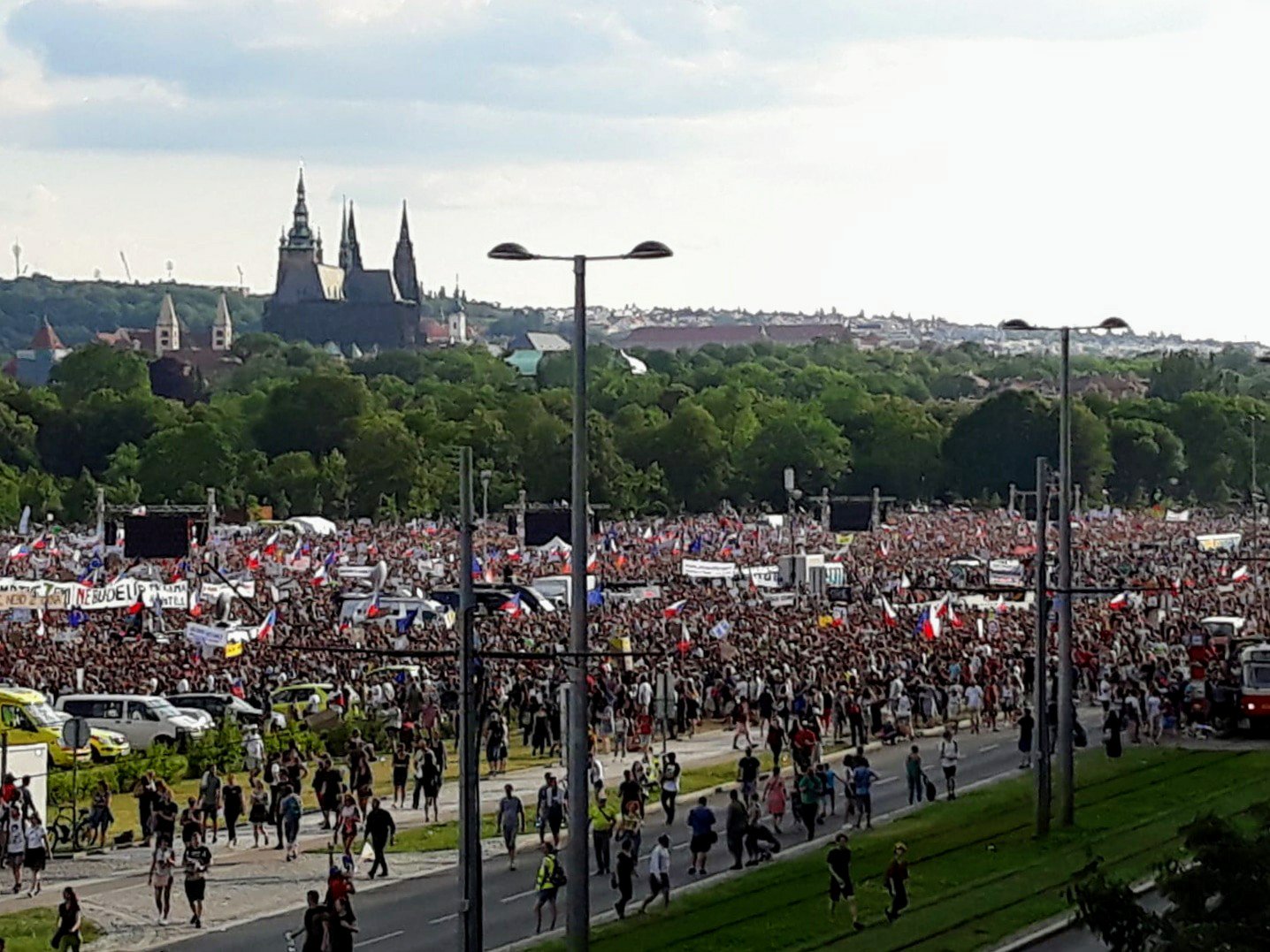 The current protests are led by reactionary bourgeois and petty-bourgeois, leaning on the workers. The main task for the Marxists is to build an organisation strong enough to connect with the best layers of workers and youth in this struggle! / Image fair use

The narrative of the clever businessman, who entered politics to save his country, is now exposed in all its grotesque reality. But the question for workers is – how to proceed? It is obvious that the ruling clique of the anti-Babiš opposition who are leading the demonstrations will not defend their interests, which they will find out soon enough as things unfold. At the same time, there is right now no credible leadership for the working class, as the left betrayed the workers by supporting Babiš, and they seem to be determined to go down with him. It is possible that neither left party will make it into parliament in the next elections in 2021. At the same time, it is not especially likely that an alternative leadership could arise from these dying parties - one capable of cleaning their banners of the stain of opportunism of the worst kind.

There are two possibilities arising from the present situation. The first is that the workers demonstrating against Babiš will be able to organise themselves independently from the right wing bourgeois opposition and move against the government and against all the oligarchs and capitalists as a whole. This would make the struggle, not one between different sections of the ruling class, but between the ruling and the exploited class. The right wing and liberal opposition would drop their mask and defend their class interests against the workers. The question of the political representation of the working class as an independent force in Czech society will thus be posed. The second scenario is that the working class would provide the bulk of the strength to the opposition demonstrations in this particular struggle for some time, but they will be abused and betrayed by the bourgeois right wing when it comes to a new government enacting reactionary policies after the fall of Babiš.

In any case, this mass movement is a symptom of both the rotten nature of Czech capitalism, and growing instability. The contradictions between the working class and the capitalists will not be resolved by a right-wing government, which will push the workers and students even further along the path of struggle, with the deepening crisis of capitalism. The radicalisation of the Czech youth (who are even displaying openness to Marxist ideas), combined with the workers beginning to show their power, is already paving the way for new revolutionary developments. The main task for Czech Marxists is to build an organisation strong enough to connect with these layers and pose concretely the task of building a revolutionary party capable of leading them towards the socialist revolution!