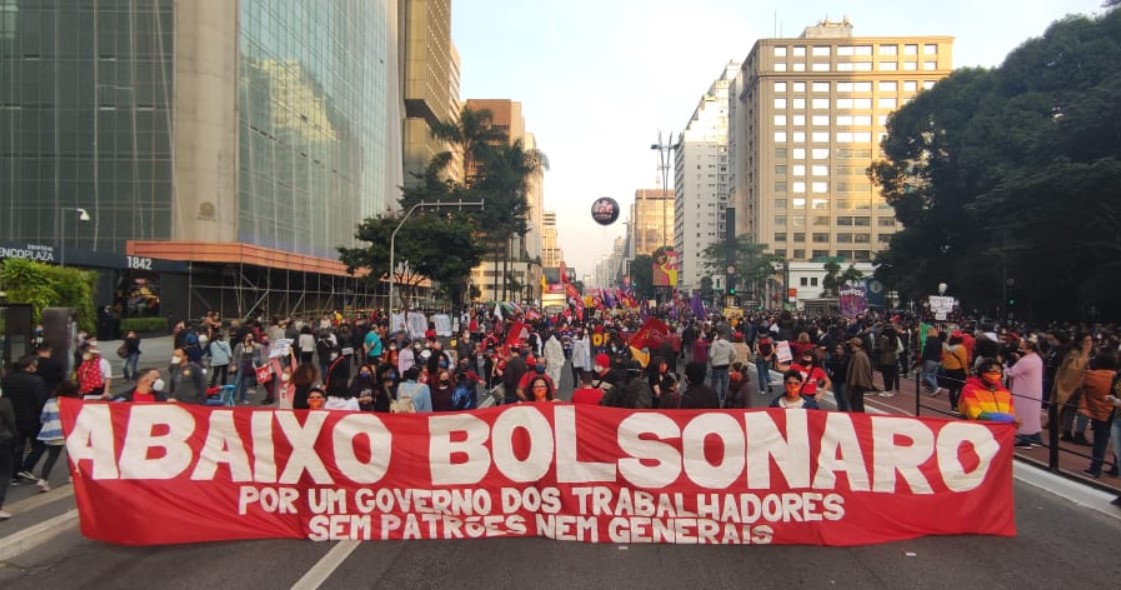 Bolsonaro’s defeat is a victory for the working class and the youth that opens up a new political situation in the country. Popular hatred for the reactionary government overcame the widespread and brazen use of the state machine in the electoral contest; the fake news; and the policy of class conciliation on the part of Lula and the PT.

In the first round, Lula had 6 million more votes than Bolsonaro. In the second round, this difference dropped to 2 million votes, the smallest difference ever seen in the second round of a presidential race since the end of the military dictatorship. A government that was directly responsible for almost 700,000 deaths during the COVID-19 pandemic, was internationally isolated, rejected by the majority of the population, and that faced high rates of inflation and unemployment, could have already been decisively defeated in the first round. Instead, it gained 58 million votes in the second round, and succeeded in seeing the election of governors and MPs that fully identified with Bolsonarismo.

Lula’s campaign soon buried any popular demands it had flirted with at the start of its journey. In the second round, his camp’s alliances with the bourgeoisie were expanded. Instead of the separation of church and state, Lula constantly referred to ‘God’, in an attempt to appear more religious even than Bolsonaro. He expanded on his personal opposition to abortion, without propounding the need to legalise the right of women to access abortion. He launched his “Letter to the Brazil of Tomorrow”, which (like his “Letter to the Brazilian People” of 2002) was a commitment to finance capital to maintain “fiscal responsibility” – that is, to prioritise paying the public debt, even if that means cutting the budget for essential services. Only in the final stretch of the first round did Lula’s campaign put out the call for mass rallies. Overall, what we saw was a campaign centred on the internet, with apolitical attacks on his adversary; rather than a campaign based on the organisation and mobilisation of the grassroots committees in the neighbourhoods and cities, opening up discussion on the concrete needs of the proletariat.

The alliance with the bourgeoisie, far from being the cause of the victory, is the broader reason that class consciousness among some layers of the proletariat has been set back, to the advantage of Bolsonarismo. In the elections, it was this conciliatory policy and the absence of a programme of breaking with capital that meant Bolsonaro and Bolsonarismo were not expelled from power in a humiliating defeat, relegating them to political insignificance. It is true that Bolsonaro utilises the conservatism that exists in different strata of Brazilian society – but a bold campaign, with proposals that break with capital, combined with a combative, class struggle rhetoric, might have pushed the religious and moral debate that conservatives were seeking to impose into the background. It would have demolished Bolsonaro’s demagoguery.

Furthermore, Bolsonaro exploits a certain anti-establishment rhetoric that connects with a layer of voters who are fed up with the system. That is to say, they are fed up with the rottenness of bourgeois democracy, and they cannot see an obvious anti-establishment option on the left. Indeed, Lula’s candidacy, by allying itself with a number of elements of the old politics, appears more representative of the old system than Bolsonaro’s candidacy.

The blocking of highways: a farce of a coup

On Sunday, after Bolsonaro’s electoral defeat was confirmed, demonstrations of joy exploded across the country. Lula, in his speech after the victory, along with his bourgeois allies, declared that he will “govern for 215 million Brazilians, and not just for those who voted for me. There are not two Brazils. We are a single country, a single people, a great nation.” 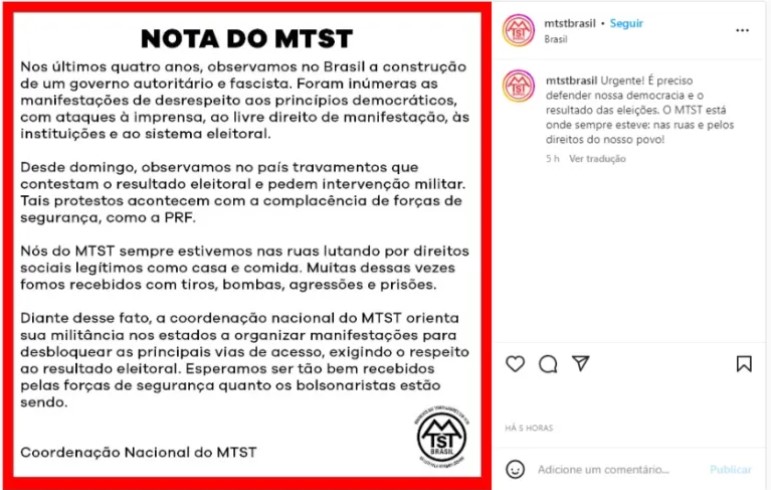 A united front action would have swept away this rabble of reactionaries in a very short time, as the Marxist Left had argued in light of the call from the leadership of the Homeless Workers Movement (MTST) / Image: MTST

But the class divisions in society cannot be erased. There is polarisation in Brazil, as in the rest of the world, as a result of the international crisis of capitalism and the sharpening of the class struggle. Sectors of the petty bourgeoisie, stoked by Bolsonaro, certainly did not agree with the statement that “there are not two Brazils” and on Sunday night they began blocking highways, refusing to recognise the result of the elections, and calling for military intervention. But these blockades were carried out by small groups and were only made possible on account of the collusion of the Federal Highway Police (the same body that tried to impede voting on Sunday in regions where the PT held the majority) and with the support of ‘Bolsonarista’ businessmen.

These blockades are easing, but they continue today (2 November). The proletariat has shown its dissatisfaction with the actions of these right-wing radicals in scattered but significant incidents. In one video, we can see workers on a bus cursing these bourgeois bums that call themselves “protesters”. In another video, we can see residents of a proletarian neighbourhood taking down the blockades; similar scenes are repeated in videos with the participation of factory and shipyard workers. The organised supporters of the soccer teams Atlético Mineiro and Corinthians forcibly freed blocked highways in order to be able to watch the games of their respective teams. All this demonstrates how a call from the leadership of the PT, PSOL, CUT or any large proletarian organisation for a united front action would have swept away this rabble of reactionaries in a very short time, as the Marxist Left had argued on Monday in light of the call from the leadership of the Homeless Workers Movement (MTST).

Nov 1. Workers from the Brasfels shipyards chase away Bolsonaro Road blockades in the Río - Santos highway at Angra dos Reis. This is how you fight fascism, with the power of the working class. pic.twitter.com/zATRSseidy

Bolsonaro’s statement and the continuity of Bolsonarismo

For almost 45 hours after the election results, Bolsonaro remained silent. His delay in commenting was possibly owed to an attempt to negotiate some kind of amnesty, so as not to face arrest following the loss of his privileged position. Bolsonaro’s prolonged silence also indicates that he had some hope of being able to refuse to recognise the election result. However, since Sunday, his allies have one-by-one recognised Lula-Alckmin’s victory, leaving Bolsonaro increasingly isolated. Sectors of the bourgeoisie began speaking out emphatically against the blockades that, after all, harm their businesses. Bolsonaro’s continued silence could have been seen as proof that the president was encouraging a coup. And so he was forced to say something, even if just an unconvincing speech that lasted for 2 minutes and 3 seconds.

In his Tuesday speech, Bolsonaro did not clearly say that the blockades should end, but he did condemn them, classifying them as a “restriction of coming and going”, and adding that these were the methods of the “left” and that the right could not adopt them. In a video released last night on his social media – almost certainly following pressure from the bourgeoisie – he clearly called for an end to the road blockades. In Tuesday’s speech, he said that the demonstrations “are the result of indignation and a feeling of injustice at the way in which the electoral process took place”, adding that peaceful demonstrations are welcome. In other words, he insinuates that there were irregularities in the electoral process, encouraging the protests to continue in other ways. In his speech, he did not recognise the result of the election. However, the Chief Minister of the Civil House then spoke, declaring that the president had authorised him to start the transition process – thus amounting in practice to an admission of defeat.

In this short speech, Bolsonaro sought to keep the right’s spirits up: “The right truly emerged in our country. Our robust congressional representation shows the strength of our values: God, homeland, family and freedom,” thus repeating a slogan based on one used by Ação Integralista Brasileira, the Brazilian fascist group from the 1930s. And he concluded his speech: “it is an honour to be the leader of millions of Brazilians who, like me, defend economic and religious freedom, freedom of opinion, honesty, and the green and yellow colours of our flag”.

Despite the electoral defeat and isolation, it is certain that neither Bolsonaro, nor Bolsonarismo, will leave the political scene. At every opportunity, they will call for acts against the new government. The roadblocks and the actions today in front of military buildings in favour of military intervention are a demonstration of this.

The Lula government, the struggle of the proletariat, and the tasks of revolutionaries

The Marxist Left has explained in several articles and resolutions how the working class was never defeated, but was held back and in a state of deadlock on account of the policies of the leadership of its organisations. The victory of Lula’s candidacy is a victory won by the working class and the youth, who have demonstrated massively in recent years against the Bolsonaro government. They only failed to bring down Bolsonaro in the streets because of the leadership’s line of channelling popular hatred onto the institutional, electoral path. 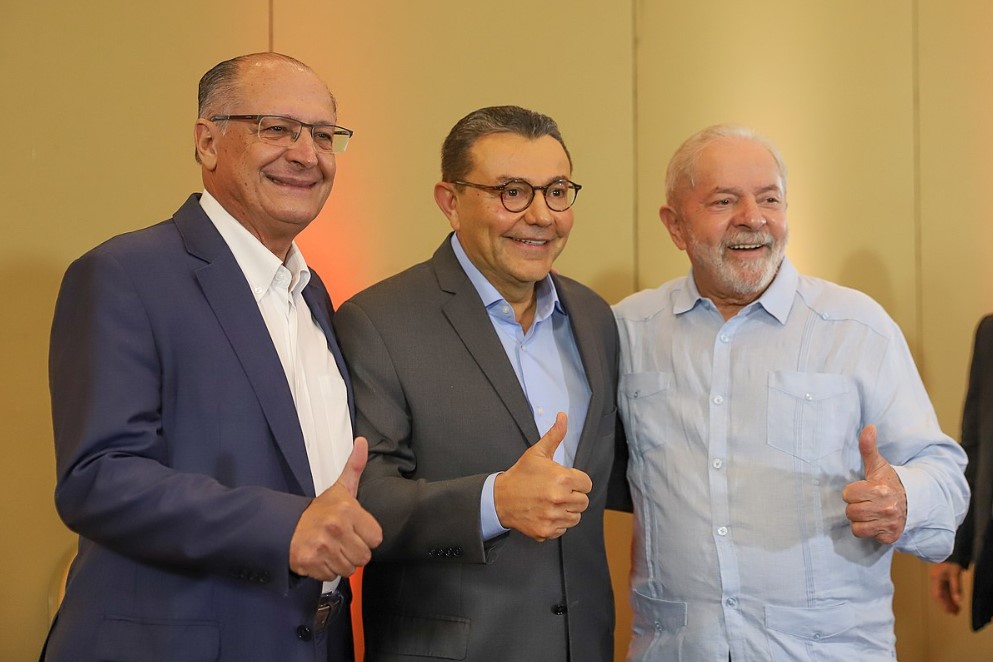 The selection of Geraldo Alckmin as transition coordinator shows who will rule in this government: the bourgeoisie / Image: PSB Nacional 40

In the episode of the repelled roadblocks, we saw a glimpse of our class’s willingness to act, despite all the calls from the leadership for peace, love, unity and trust in bourgeois institutions. The task of the Marxists at this moment is to fight for the united front of the proletariat, and to explain the current situation and the perspectives that open up before us; highlighting the necessity of leadership. Marxists must organise those who have understood the need for the independent organisation of the proletariat in a struggle to overthrow the regime of private property of the means of production, basing our fight on Marxist theory.

The so-called Centrão (‘Big Centre’: a bloc of smaller parties whose votes are up for grabs to the highest bidder), and even the president of the PL (Bolsonaro’s party) are already expressing their openness for “talks” and “negotiations” over the next budget. We all know what this means – they are bargaining for the right price for their votes. After all, as the saying goes: “the king is dead, long live the king!” And the vast majority of the deputies in the rotten National Congress put their personal schemes and privileges first.

However, at this juncture, the workers are victorious. And they will claim this victory as their own. They will demand the fulfilment of their demands, the return of rights taken away, and they will deploy their own methods of struggle: strikes, demonstrations and occupations. It is worth remembering that, from the campaign and victory of Lula in 2002, the Movement of Occupied Factories in Joinville arose. Incidentally, the Marxist Left is now celebrating 20 years of these occupations at the Cipla and Interfibra factories. This forms the theme of the new edition of our theoretical magazine, “América Socialista – Em Defesa do Marxismo”. We are also hosting a commemorative event in Joinville on 3 December, an event that will be broadcast online.

In the coming period, we will have the intensification of the class struggle, with a national unity government committed to the interests of the bourgeoisie; a far right that will seek at all times to destabilise this government in order to return to power; and the working class and the youth willing to fight for jobs, rights and better living conditions. It is necessary to prepare ourselves, to organise ourselves for this situation, for these conflicts. We need to strengthen the revolutionary organisation, we need to redouble our efforts to build the Marxist Left, the Brazilian section of the International Marxist Tendency.

For a government of the workers, without bosses or generals! Long live international socialism!