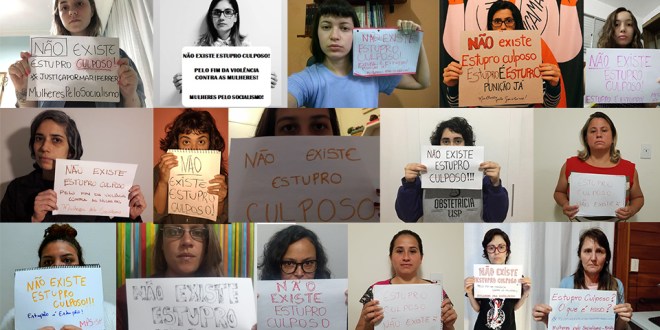 A wealthy businessman who raped a young woman in Brazil has been let off scot-free by a sexist bourgeois court, further exposing the rottenness of the capitalist state.

The case of the young woman Mariana Ferrer of Santa Catarina who was raped by a businessman in a nightclub in Florianopolis reverberated throughout the country and came to a head on 3 November. The businessman, connected to big names in international football and the son of the lawyers of Rede Globo, was acquitted by the judiciary.

The acquittal took place with the approval of the Public Prosecutor’s Office (who was responsible for defending the victim’s interests) under the justification that the rape was unintentional.

The process was handled in secret. However, according to information from the site Intercept Brazil, the story of the Public Prosecutor’s Office is that there was no way for the businessman to know during the act of sex that the young woman was not in any condition to consent, therefore, there was no “intention to rape”.

Unintentional rape is not provided for by the law. Since under criminal law one cannot be convicted of a crime that does not exist, the businessman was acquitted.

What the Public Prosecutor’s Office and the judge of the case “forgot” to take into consideration is that unintentional rape does not exist in the Penal Code precisely because there is no middle ground in this crime: there either was or was no rape.

This legal excrescence, which even the youngest of law scholars is capable of refuting, does not have a legal or rational basis.

The effect of machismo and sexism is easy to see for everyone who watches the video of the hearing, where the businessman’s lawyer humiliated the victim in countless ways, including stating that her “livelihood is to disgrace others’”.

All of this occurred in front of the judge, the president of the hearing, and the member of the Public Prosecutor’s Office, the “law enforcement officers”, who passively watched all of the abuses committed by the lawyer.

It is indisputable that the machismo that permeated the entire case was blatant, revolting, and absurd. But it is necessary to go further. The focus of the question goes far beyond the question of the oppression of women by men. What is striking in this case is the role of the bourgeois state when the interests of a dominated class clash with that of the dominant.

We Marxists are not adept at the superficial explanations given by the multiple different groups, who support ideas that historically only serve to further divide workers. For us, we have no doubt about the rottenness and the lack of limits of the bourgeois state when it comes to the defence of the interests of the bourgeoisie.

Role of the state

Marx and Engels made it clear in 1848 that the capitalist state is nothing more than a committee to manage the common affairs of the entire ruling class. Obviously, the state was born long before capitalism. However, in its essence, it came into being as an organ of class domination. In the words of Engels:

“The State [...] is a product of society during a certain stage in its development. It is the confession that this society is embarrassed by an insoluble internal contradiction, it has been divided into irreconcilable antagonisms that it cannot escape. But in order for these antagonistic classes, with opposing economic interests, to not devour each other and not devour society in a sterile struggle, there was a need for a force that would appear above society, in order to mitigate the conflict within the limits of ‘order’”.

Therefore, what the bourgeoisie did at a certain point in its development was simply take the state into its own hands. It did not gain economic and political power for nothing; it took over the state and its entire structure so that they ceased to service the ruling class of the previous system and started to serve their interests: executive, legislative, and judiciary.

The defence of the dominant class by the judiciary is obvious in numerous other cases known in Brazil. As a reminder: (1) The case of the son of Eike Batista, who made his millions in sports, who was acquitted after running over and killing a worker on a bicycle; (2) The case of the son of the then-owner of RBS-SC (a media conglomerate), who was “sentenced” to freedom for the gang rape of a young woman at his school and who, (3) years later while driving a car at high speed while drunk and on drugs, ran over three people, killing one. Needless to say, he remains at large.

However, what these cases do not have in common with Mariana’s is the latter occurred in the context of a systemic crisis that has been going on for more than a decade, a period of instability between classes, where a small spark can cause an explosion. It would not be surprising if, in the next few days, the judiciary itself finds a “legal” solution to put a lid on the subject, thus avoiding further repercussions.