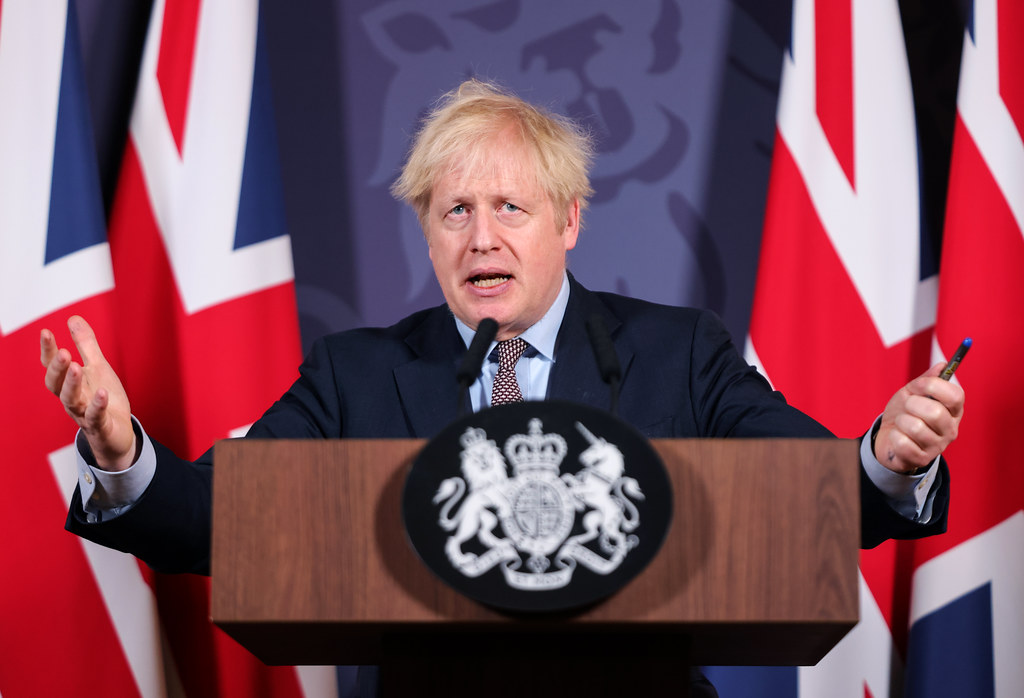 The Tory government is on a collision course with the European Union over the question of trade and the North of Ireland. The capitalists on both sides are losing control of the situation. An explosive cocktail is being prepared.

In 2019, Boris Johnson promised that he would ‘Get Brexit Done’, ending the ‘dither and delay’ of negotiation and renegotiation with the European Union, so that Britain could get on with the job of establishing a new relationship with Europe and the world.

Two years later, however, the Brexit affair continues to drag on and on, with European relations in tatters over the Northern Ireland Protocol.

British and EU diplomats continue to try to find a workable solution after the UK all but jettisoned its agreements over customs checks and the North of Ireland’s place in the Single Market.

The Tories are now demanding a totally different settlement – one that goes against many of the fundamental ‘red lines’ of the EU. Brussels’ representatives, meanwhile, insist they will not renegotiate what was agreed.

Whether an honest agreement is even possible has been thrown into question by yet more bombshell revelations from Boris Johnson’s maverick former adviser, Dominic Cummings.

Speaking like a mobster, Cummings tweeted that the original Withdrawal Agreement and ‘Get Brexit Done’ sloganeering was chiefly about trying to ‘whack’ Jeremy Corbyn in the 2019 general election.

According to Cummings, Boris Johnson had little clue what the Agreement meant, or how the NI Protocol worked – and he didn’t care. The intention was to pull together anything that seemed final, and dump it once the threat from Labour and Parliament had been dealt with. Then negotiations could begin to get the ‘bespoke deal’ the Tories had promised.

Holes in the border

The backtracking over the Withdrawal Agreement angered many in the EU, exposing the current crop of Tories as cheats and dishonest negotiators.

Irish Tánaiste (Deputy PM) Leo Varadkar questioned whether Britain can be trusted in any sphere of international law or trade – a warning to the British capitalist class that it is burning its bridges. 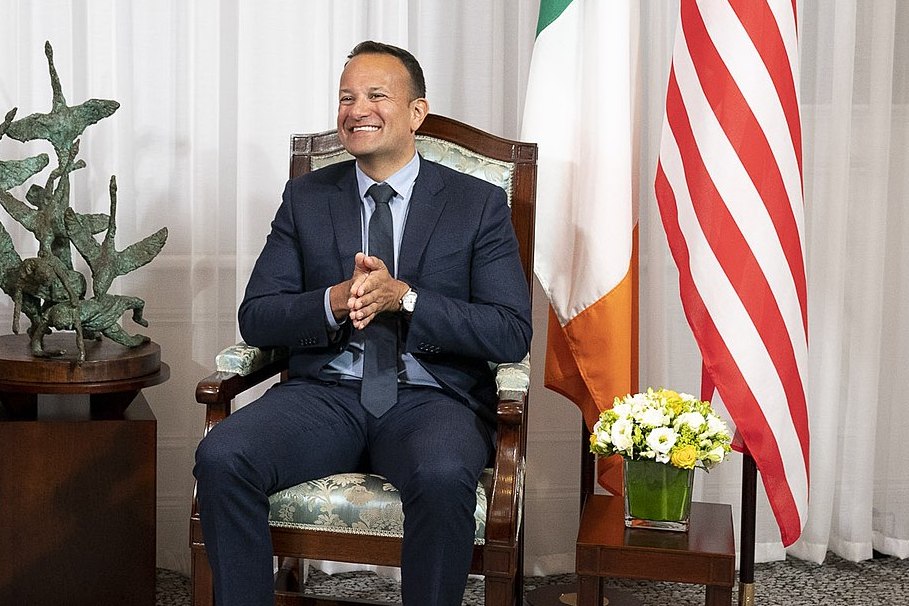 Irish Tánaiste (Deputy PM) Leo Varadkar questioned whether Britain can be trusted in any sphere of international law or trade – a warning to the British capitalist class that it is burning its bridges / Image: public domain

The Tories essentially want to have their cake and eat it too, with the North of Ireland remaining in the Single Market, thus ensuring an open border between it and the South of Ireland, but with no customs checks between Britain and Ireland.

On the contrary, the EU insists that the open border in Ireland is conditional on the UK working with the EU to enforce Single Market customs rules for goods crossing the Irish Sea.

The stubborn refusal of the British government to implement border checks between the North of Ireland and Britain is a serious problem for the EU. It leaves a gaping hole in the border protecting the single market.

This is completely intolerable for the European capitalist class. As European Commission Vice President, Maros Sefcovic described it: “The Protocol is a unique solution that the EU has never offered before. We are outsourcing the control of part of our border to a third country.”

But Britain is the last country that the EU would consider handing over the protection of its border to!

Precisely this customs arrangement – which the EU says is unavoidable, and which the UK itself had indeed agreed to – has caused political crisis and unrest in the North of Ireland.

Loyalists, including former paramilitaries, condemn the ‘Irish Sea Border’ as an affront to their status as part of the United Kingdom. Intimidation of customs staff and street protests – culminating in sectarian riots in April – have been unleashed to try and force the NI Protocol to be abandoned.

The question of a new ‘Irish Sea Border’ has also further fuelled the crisis of Unionism, and the Democratic Unionist Party specifically, with the party’s politicians removing two leaders – Arlene Foster, then Edwin Poots – in quick succession earlier this year.

The latest leader, Jeffrey Donaldson, has struggled to take the reins and contend with Loyalist anger over the Protocol.

The whole crisis is keeping the pot of instability in the North of Ireland boiling. The power-sharing Assembly is once again teetering on the verge of collapse, and the economy is being throttled by ongoing disruption to supply chains.

Ireland has effectively been caught as the ‘piggy in the middle’ between the self-interests of the EU and Britain. 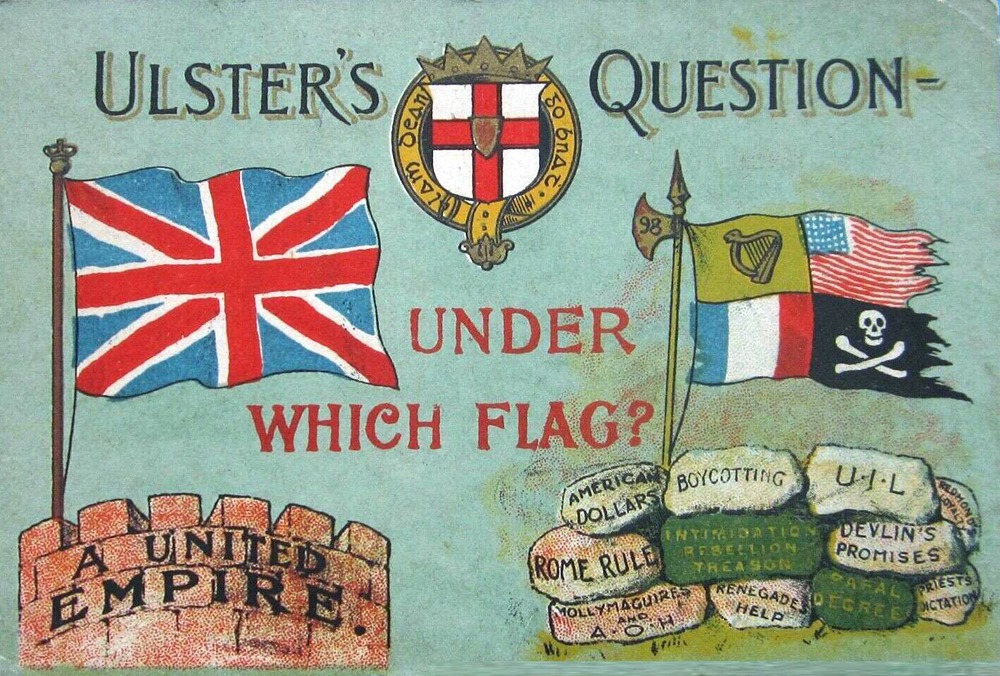 Precisely this customs arrangement – which the EU says is unavoidable, and which the UK itself had indeed agreed to – has caused political crisis and unrest in the North of Ireland / Image: public domain

But this schism over the Protocol is not going to be resolved any time soon, and could very well escalate.

The Tories’ core demand that the European Court of Justice (ECJ) should not have the power to rule on customs disputes is unacceptable to the European Commission. The UK has already de facto annulled many of the NI customs rules it agreed to, with the EU powerless to enforce them without the ECJ.

Although the NI Protocol effectively subcontracts management of a segment of the EU’s border to Britain, Boris and the Tories have no interest in enforcing it. They regard it as an expensive technical headache that disrupts trade, and which inflames other political headaches in the North of Ireland.

On the other hand, there’s no harm for Boris in having a situation of ‘permanent Brexit’: an open sore that would give him a permanent political bogeyman (in the shape of the EU) to shore up his own position and appease his party’s frenzied ranks.

Under no circumstances can the European Commission back down, however.

The Tories have threatened to trigger Article 16 – the article giving Britain and the EU powers to unilaterally suspend the NI Protocol. But should they do so, the EU would have no choice but to show its teeth and attempt to force Britain to close the hole it has created in the border of the Single Market, out of fear of the economic consequences if it fails to do so.

In short, the whole thing has the potential to spiral into a trade war between Britain and the EU. Tit-for-tat tariffs and special regulations could be imposed by both sides in an attempt to recover any losses and bully the other into submission.

The UK government is continuing with the bluff and bluster that we are used to. Already British negotiators are talking about a deal done by Christmas. But this is a sham.

The EU has other pressing problems to deal with, besides giving the UK special treatment. Poland’s recent rejection of EU law has enraged the European Commission, which has accused Poland of violating the rule of law and setting the country on a ‘Polexit’ trajectory. Similar divisions have opened up between the Commission and Hungary.

Whilst a trade war between the UK and EU would be costly to both, of the two it would be the UK that would come out worse.

The fact is that the capitalists on both sides desire to avoid such a scenario. But their grasp on the situation is loosening, with national tensions becoming inflamed and political stability slipping into oblivion as capitalism sinks further into a historic crisis.

And with shortsighted politicians of the calibre of Boris Johnson at the helm – politicians whose egotism and short-termism reflect the same qualities in the class they represent – the result is a toxic mixture with explosive potential.