A huge backlash has occurred in response to the racist abuse suffered by England’s black players. Prime Minister Boris Johnson and one of his ministers, Priti Patel, have hypocritically offered their support. It is the capitalist establishment that are responsible for racism.

These disgusting remarks were particularly targeted towards three black players – Marcus Rashford, Jadon Sancho and Bukayo Saka – who failed to convert penalties in the shootout against Italy at Wembley.

A mural dedicated to Rashford (and his campaigning around child poverty) was also defaced after the game. And reports have circulated online of racially-motivated attacks and incidents on Britain’s streets as well.

These rotten acts of racism have been met with huge outpourings of solidarity towards England’s abused players.

On Monday, hours after the mural was defaced, hundreds of local people in Withington, Manchester, turned out to cover up the damage with heart symbols to show their support for Rashford. In Response, Rashford posted these emotional words; words that are now seen as a call to action by many: "The communities that always wrapped their arms around me continue to hold me up,... "I'm Marcus Rashford, 23 years old, black man from Withington and Wythenshawe, South Manchester. If I have nothing else I have that."

Up and down the country, people have made their support for the attacked players clear – just as those at Wembley had done in the wake of the game. Over 900,000 have already signed a petition to ban racists for life from future football matches. 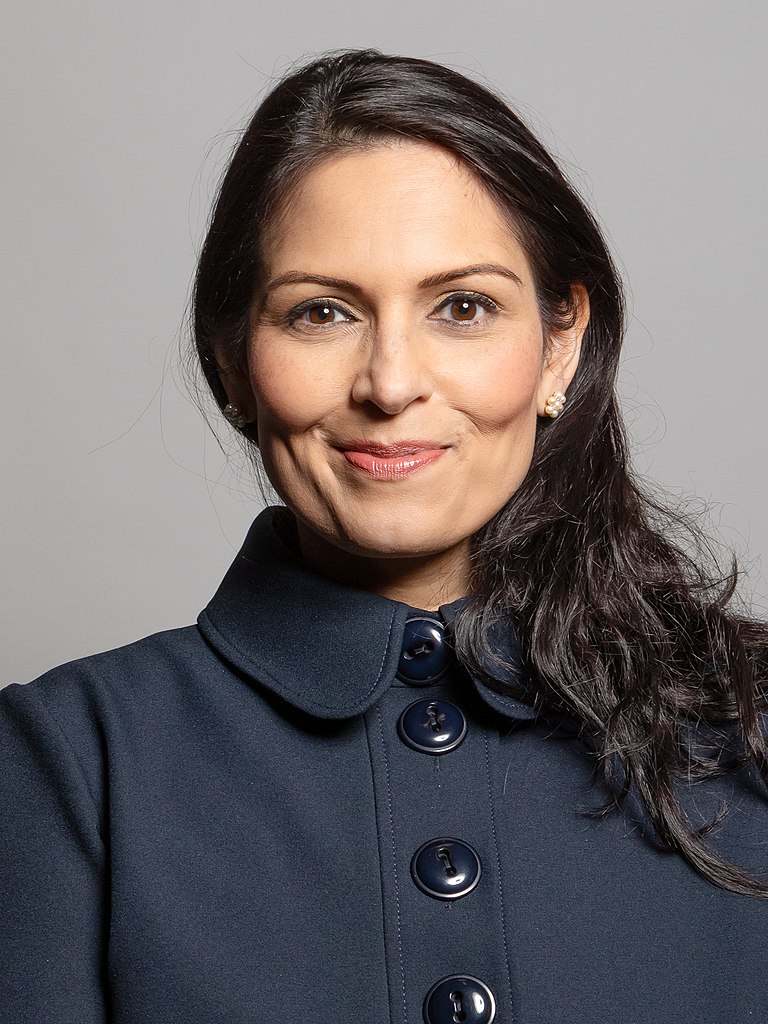 Feeling this public pressure, leading Tories such as Boris Johnson and Priti Patel have come out in defence of the England trio, condemning the racist abuse that they have received.

This condemnation from Johnson and co. stinks of hypocrisy, however.

At the beginning of the competition, the Tories were consistently partaking in dog-whistle racism, undermining players who chose to take the knee before games.

The whole team agreed to make this statement against racism. Yet when a layer of fans in the stands booed this act, Johnson equivocated. Instead of defending the England team, the Prime Minister refused to criticise the booing, calling it a legitimate expression against a “political” act.

Similarly, at the start of the tournament, Priti Patel told right-wing news channel GB News that she also did not support taking the knee, describing it as a “type of gesture politics”.

When asked if she would criticise fans who booed England players, the Tory home secretary replied: “That's a choice for them, quite frankly.”

So for Patel, it seems, racism is just a personal choice, and not something to be actively fought.

Elsewhere, another Tory MP, Lee Anderson, said that he would refuse to show support for the England team as long as they continued to take the knee.

Others in the right-wing press started spreading the line that the whole England camp was infected by Marxism; and that manager Gareth Southgate was a “tool of deep woke”.

Alluding to some sort of political conspiracy, one Tory strategist even told an FT journalist that he felt that Southgate’s pre-tournament ‘Dear England’ open letter was “suspiciously well-written”.

The Tories were clearly and cynically using this opportunity to further their divisive and distracting culture war against the Black Lives Matter movement and the left.

With the England team playing well and winning matches, and the public rallying behind them, however, the Tories switched tack. Sensing the possibility of a summer of flag-waving, parades, and knighthoods all round, suddenly Johnson was donning an England shirt and applauding the players. 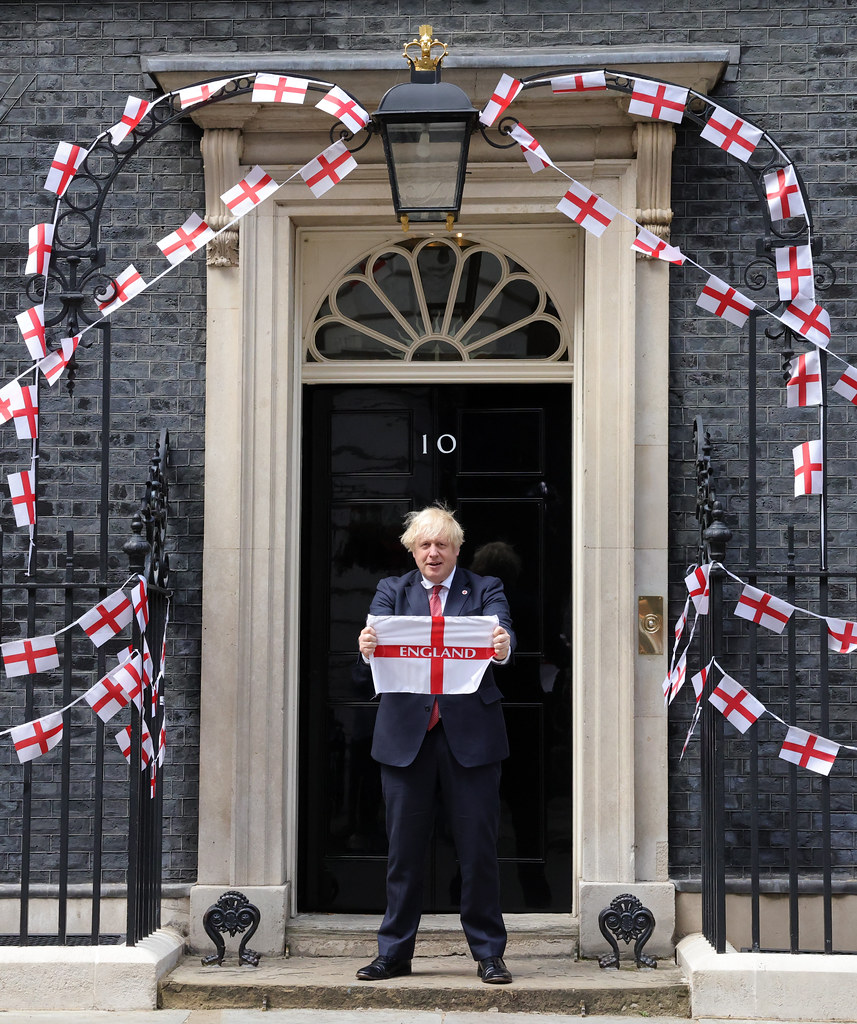 Having first played their culture war, and having accused the England team of engaging in 'woke' gesture politics, the Tories made a 180 degree turn when as the team performed well, sensing a chance to whip up English nationalism over the summer to distract from their own failures / Image: Number 10, Flickr

The government saw England’s success in the Euros as a chance to cultivate a mood of patriotism and ‘national celebration’ – providing the great advantage of keeping other news (such as the rapid rise in COVID cases) off the front pages.

After all, why should people worry about the impending health crisis, when you could be in the pub singing Three Lions?

Suddenly, it seemed, the Tories were the England team’s biggest fans.

Many commented, for example, on the irony of Patel saying that football was ‘coming home’, given that she worked so hard to implement a ‘hostile environment’ to stop people ‘coming home’ to the UK.

Given their history, therefore, recent statements from Johnson and Patel against online racist abuse are rightly seen as being completely two-faced.

One England player, Tyrone Mings, summed it up accurately when he posted a tweet in response to Patel:

You don’t get to stoke the fire at the beginning of the tournament by labelling our anti-racism message as ‘Gesture Politics’ & then pretend to be disgusted when the very thing we’re campaigning against, happens. https://t.co/fdTKHsxTB2

Despite Johnson and Patel’s apparent volte-face, however, it seems that not all Tory MPs received the memo about the new party line.

Yesterday, for example, Fay Jones MP asserted that taking the knee “is a political symbol and I think that's the problem that certain people have had with it”.

Another Conservative MP, Natalie Elphicke, stated that Marcus Rashford should have spent less time “playing politics” and more time playing football – a clear reference to his campaign against the government over the issue of free school meals.

Elphicke later apologised for her comments. Nevertheless, here we see the real face of the Tories and the establishment.

Of course, the Tories’ whipped-up culture war and dog-whistle racism did not begin this summer.

Boris Johnson, for example, has a long history of making racist ‘jokes’: referring to niqab-wearing Muslim women as ‘letterboxes’; and describing black people as ‘​piccaninnies’ with ‘watermelon smiles’.

In truth, the Tory Party is riddled with racism – as, indeed, is the whole establishment.

It is this racism from the ruling class that percolates down into the rest of society – all fed by the reactionary gutter press, of course.

The racism received by the three England players on Sunday night would no doubt have been familiar to them – and to all black people in Britain.

One group of young black footballers told BBC 5 Live that they were not even surprised to see the abuse levelled at Rashford, Sancho, and Saka, such is the level of racist abuse they face each day.

Sadly, despite all the slogans about ‘kicking racism out of football’, the ‘beautiful game’ also has a long tradition of failing to tackle racism.

For decades, including in recent years, racist remarks and actions on the pitch have just been ignored by the authorities, and little has been done to counter any racism coming from the terraces.

Where gains have been made, and attitudes have been changed, it is down to pressure from supporters’ groups, alongside the campaigning efforts of working-class players who have struggled against the odds.

Some snide commentators have tried to suggest that racism is embedded in the working class, and therefore in football, attempting to paint all fans as ‘hooligans’.

Such slanders are blatantly false, and we must reject these assertions entirely: just look at those fans who stayed behind to clap the players on Sunday; or those who went out in the rain to repair the Rashford mural.

In truth, racism is a virus created and cultivated by the ruling classes: constructed during the age of Empire to justify colonial oppression; and continually used to this day to divide the working class.

This is what lies behind the Tories’ so-called ‘war on woke’ in recent years. This hysterical ‘culture war’ against the BLM movement – and in defence of slave-owner statues and the Union Jack – is cynically designed to set workers against one another, and to distract from the establishment’s crimes.

Unfortunately, Keir Starmer and the Labour right wing have played into the Tories’ hands on this question, attempting to outflank Johnson and co. when it comes to patriotism and flag-waving; and distancing themselves from anti-racist activists.

Instead, the left and the labour movement must fight to expose the hypocrisy of the Tories and the rest of the establishment when it comes to the question of racism.

We should join the likes of Tyrone Mings in focusing the blame for racism – like the online abuse experienced by England’s players – firmly on the establishment, in general; and on Tories such as Johnson and Patel, in particular.

At the same time, we must reject the ruling class’ attempts to rally people together behind the England flag, with appeals to show ‘national unity’ in the face of such disgusting displays of racism and abuse.

We must tell the truth: There can be no unity between workers and youth, on one side, and the rotten capitalist establishment and their two-faced political representatives, on the other.

The unity we must strive for is the unity of the working class – black and white – in the fight to kick out the Tories, and to overthrow the racist capitalist system that they defend.