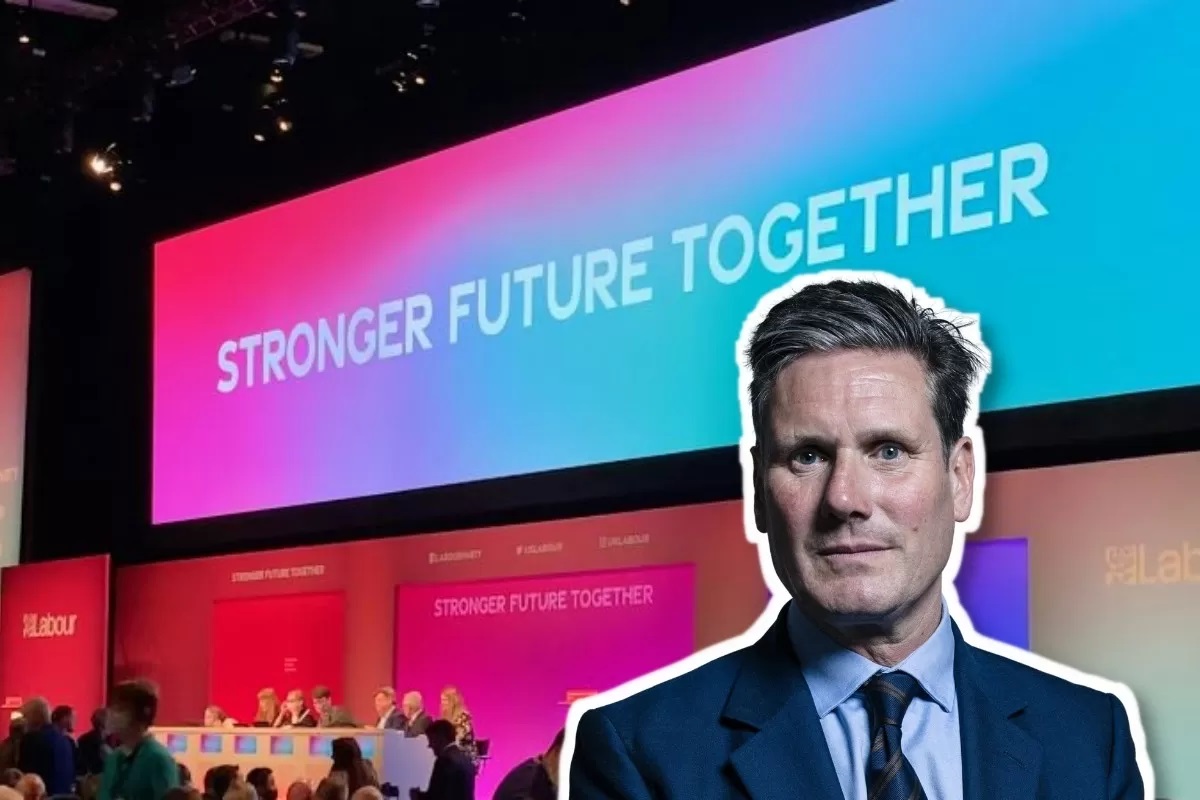 The Labour right wing in Britain has won a series of important votes at this year's party conference over the weekend and this week, provoking anger and outrage amongst left delegates on account of their bureaucratic antics. Amidst this mess, however, the ideas of Marxism have gained a strong echo.

This year’s Labour conference, taking place in Brighton, has really kicked off with a bang.

The first in-person conference for two years has seen a heated battle on the conference floor. Points of order have been raised and ignored; votes have been rigged; and left-wing speakers have been abused and heckled.

Starmer and the insurgent right wing are driving through a counter-revolution of rule changes to secure their rule. The left is fighting a rearguard battle. Socialist Appeal supporters have been on the frontline in this civil war.

Lacking confidence in their forces on the ground, the right wing has resorted to outrageous gerrymandering and bureaucratic manoeuvring to secure victory.

Numerous left-wing delegates were expelled over the week prior to conference. Some received their expulsion emails as late as Friday evening, having already made the journey down to Brighton.

Socialist Appeal supporters who were elected as conference delegates have been particularly affected by these shameless antics.

Those delegates that did make it down were then blocked on the door. Scandalously, for example, Kate Osborne – an elected delegate from Hexham CLP – was actually prevented from entering the conference due to the ‘crime’ of supporting Socialist Appeal.

Other Socialist Appeal supporters faced even more heavy-handed treatment. On Saturday, Jonathan Lees – a delegate from Leeds Central CLP – was dragged off the conference floor by multiple security guards.

Jonathan was targeted for wearing a t-shirt that said ‘Starmer Out! Fight Tories Not Socialists!’

In a blatant attempt to intimidate him, Jonathan was then taken to the police, who proceeded to take his conference pass and details off him.

Democratically elected by his CLP; forcibly removed by Starmer!

Similarly, Alex Charlton – delegate for South West Hertfordshire CLP – was escorted off the conference floor by security; expelled for being a Socialist Appeal supporter.

These acts are nothing short of political intimidation and thuggery.

Today I was escorted out of the Labour Party conference. I’d been expelled on the eve of conference but decided to go anyway and try to get in, to represent my CLP who had elected me as a delegate. I was expelled for being a supporter of Socialist Appeal…

These antics, however, did not go unchallenged by other delegates on the conference floor.

With left-wing delegates seething over the right wing’s antics on the first day of conference, Joe Attard – a Socialist Appeal supporter and delegate for Ealing Central & Acton CLP – gave a rousing speech that denounced Keir Starmer and David Evans and their attacks on party democracy and grassroots members.

In response, Joe received a standing ovation from fellow delegates. And unsurprisingly, he has also been expelled from the party.

Other left-wing delegates were also expelled prior to getting into the Brighton Centre, or were escorted off the conference floor.

This included Leah Levane, vice-chair of Jewish Voice for Labour (JVL), who was expelled along with other JVL members on Sunday, ahead of the vote on rule changes relating to the EHRC recommendations and antisemitism.

The key battle on the first day of conference was around the vote to ratify David Evans as general secretary. This saw a big win for the witch-hunter-in-chief, and thereby the right wing also, with a recounted card vote showing 57% support for Evans and 43% against.

On Sunday, having earlier been forced to retreat over plans to reintroduce the electoral college system, Starmer and the right wing chalked up a significant victory, increasing the nomination threshold for future leadership elections from 10% of Labour MPs to 20%.

Notably, this vote was carried by the right-wing unions, with the majority of CLP delegates against. Most scandalously, delegates from Unison, under the direction of the union’s right-wing bureaucracy, voted in support of this rule change, despite having no mandate to do so.

A statement re: yesterday’s vote on the rule changes at #LabourConference21 #Lab21 👇#TimeForRealChange pic.twitter.com/KiA7F4zfjG

The Labour right wing has also used this year’s conference to limit other aspects of party democracy – for example, reducing the number of motions that conference debates from 20 to 12.

This and other rule changes, however, such as those around the EHRC report, saw the left lose amongst both CLP delegates and affiliated organisations.

This shows the impact both of the right wing’s gerrymandering and clampdown on party democracy, and of the general demoralisation amongst rank-and-file members, which has weakened the grassroots left significantly, with tens-of-thousands of activists leaving Labour.

The Corbyn movement shook the Labour right wing and their establishment backers to the core. The rule changes proposed by Starmer and the right aim to prevent any such left challenge from ever arising again.

Nonetheless, events at conference have shown that socialist policies are still incredibly popular among the rank and file of the party.

A motion for a socialist Green New Deal, for example, which had initially been thrown out by the Conference Arrangements Committee, was passed overwhelmingly.

During the debate on this motion, Manchester Gorton CLP delegate and Socialist Appeal supporter Nick Hallsworth highlighted how to truly tackle climate change, we must expropriate the capitalists, by nationalising the banks and the commanding heights of the economy.

Importantly, however, Nick linked this demand to the struggle against the Blairite traitors within the party, who have continually sabotaged the left, and thereby prevented any chance of seeing a socialist transformation in society.

🔴 WATCH: Manchester Gorton CLP delegate and Marxist speaks on the need for a real socialist Green New Deal to fight climate change and attacks the Blairites for sabotaging the 2017 election and Corbyn leadership. Standing ovation in response. pic.twitter.com/lmIR4iBuyn

This highlights a sad – but important – reality: The policies passed at conference will be meaningless unless the current right-wing leadership is replaced.

Starmer and the Labour right will simply ignore any demands from the membership that threaten the capitalist system. Indeed, their aim in crushing the left is precisely to make the Labour Party a safe pair of hands for capitalism.

This is why the struggle for socialism must also be a struggle to drive the right wing out of the labour movement; to transform the Labour Party and the trade unions into real fighting organisations for the working class.

Why they really banned us

Events at conference thus far have certainly caused widespread anger, outrage, and demoralisation amongst left-wing activists. But amidst this darkness, the Socialist Appeal fringe meeting on Saturday evening offered a beacon of light.

Around 70 conference delegates, visitors, and local workers and youth attended to hear Rob Sewell speak on the Marxist traditions within the labour movement, and the inspiring lessons that we can draw from past struggles.

Rob explained that no matter how much they purge socialists from the party; no matter how dire the situation in the Labour Party may be, the right wing and the ruling class cannot hold back the rising tide of class struggle.

In the discussion that followed Rob’s introduction, contributions from Socialist Appeal supporters covered the increasingly revolutionary mood amongst young people; the deep crisis of British capitalism, with shortages of fuel and food; and the growing ferment in the trade unions.

Replying to the discussion, Rob explained that – despite the Labour right wing’s best attempts to ban and expel Socialist Appeal – the ideas of Marxism cannot be separated from the labour movement.

In his conclusion, Rob made a rousing call to arms, imploring those inside and outside the Labour Party to join the fight for socialism and help build the Marxist tendency: in the labour movement; in workplaces and on campuses; and on the streets.

As this year’s Labour conference draws to a close, this is the urgent challenge that lies ahead of us: to build the forces of Marxism, in Britain and internationally. We call on militant workers and youth to join us in this task.