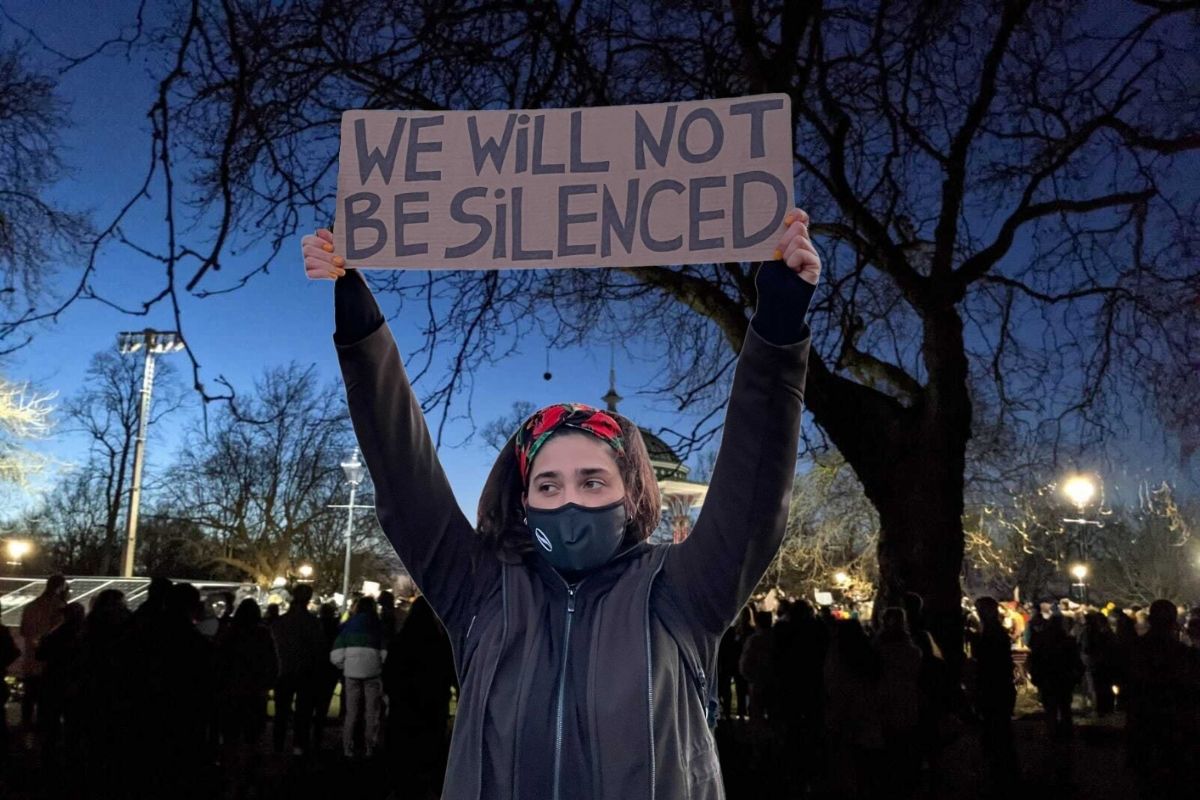 Over the past week, Britain has experienced an outpouring of anger and indignation after the body of 33-year-old Sarah Everard was discovered in Kent. She had been abducted and murdered while walking home from a friend's house in South London. An off-duty policeman has been arrested and charged with this heinous crime. On the weekend, a peaceful vigil in Clapham Common was brutally broken up by police, using COVID-19 restrictions as an excuse.

This poured petrol on the flames. Now, large protests are breaking out in Britain against violence towards women and against the disgusting actions of the police. Far from protecting us, this system is killing vulnerable and oppressed sections of society, and silencing dissent. We must organise and fight back on a class basis to end violence against women!

“Killed by the system we're told 'protects' us.” These were the words on one placard at the vigil held on Saturday evening for Sarah Everard in London – a protest against the daily violence, oppression, and unsafe conditions that women face under capitalism.

Sarah’s horrific death has brought to the surface the traumatising experiences women live through day-in, day-out as a result of this oppressive system.

Women everywhere know how easily it could have been them that day. Sarah set off to her house after having dinner with a friend in South London. But she never arrived home.

A serving Met police officer has now been charged with her kidnap and murder. Only three days before Sarah’s disappearance, the officer was accused of indecently exposing himself in public. And yet when he was arrested on 9 March, the officer was still working for the Met.

This demonstrates, once again, that the police will always protect their own before the public.

TUESDAY 16 MARCH, 7PM: Join activists and speakers from Socialist Appeal and the International Marxist Tendency for an important discussion on how we can fight to end violence against women – and end the capitalism system. Register here.

A peaceful vigil – in memory of Sarah Everard and all those women affected by violence – was organised for Saturday 13 March. Hundreds, maybe thousands, of mourners arrived on Saturday evening at Clapham Common, near Sarah’s home in Brixton, London.

Earlier in the week, the police had intimidated the vigil’s organisers into cancelling the event using the threat of a £10,000 fine for breaching COVID rules. Nevertheless, large numbers of protestors defied this ban, in order to reclaim the public space where this tragedy occurred.

But grief ended in anger and violence as the Met police – for whom the alleged perpetrator of this horrendous crime worked – brutally attacked the protesters. Police officers pushed and kicked demonstrators while trampling flowers and candles laid out in tribute to Sarah, attempting to silence women from speaking out in her memory.

There was a heavy police presence from the start. Initially, police held women back, as demonstrators mourned Sarah’s loss and shared their fury. Some of the placards read: “She was just walking home”; and “We are the 97 percent” – a reference to a recent survey which found that almost all young women in the UK have endured sexual harassment.

But the police then moved in to drag speakers away, violently beating protesters as they shouted slogans such as “arrest your own” and “shame on you”.

At least one woman was handcuffed and taken away to a police van. One young woman, threatened with arrest, told journalists: “Them being here and doing this – there was no need, people are wearing masks and socially distancing. They are showing brutality.”

Even some Tory MPs have come out in criticism of how the Met brutally responded to the vigil on Clapham Common. But this is pure hypocrisy coming from these establishment politicians. Their concerns for the welfare of women are paper thin.

After all, these are the same Conservative politicians who have slashed domestic shelters and other services upon which vulnerable women rely; who recently voted through the infamous ‘Spy Cops’ Bill, which gives police spies immunity from crimes made against political activists – including rape and harassment.

Labour leader ‘Sir’ Keir Starmer – who says he is “deeply disturbed” by scenes from Saturday night – has now said Labour will vote against the Police, Crime, Sentencing and Courts Bill, which is currently being discussed in Parliament.

This new law could see protesters given 10-year sentences for ‘causing annoyance’. Before Saturday’s vigil, however, Starmer was declaring that he would whip MPs to abstain on the same bill.

The government and the Met are now facing an enormous backlash of anger, with calls for the resignation of Home Secretary Priti Patel and Chief of Police Cressida Dick – those responsible for the horrific scenes on Saturday night.

Following the brutal repression against Saturday's vigil, thousands more came out to protest yesterday on Parliament Square, adding their voices to cry for safe streets, and for the Met chief’s resignation. ‘Sir’ Keir Starmer, unfortunately but unsurprisingly, has refused to add his voice to these calls.

The Met have cited ‘health and safety concerns’ for their repressive actions against female protestors on Saturday night. But this is a scandalous excuse to give, especially in light of the fact that it is a police officer who is alleged to have carried out this horrific murder.

As many protesters have correctly pointed out, lockdown rules are rarely enforced. The parks and outdoor areas are full of people socialising. And the bosses have spent the whole pandemic evading COVID restrictions. And yet, when a peaceful vigil takes place to protest the murder of a young woman by a police officer, the Met violently attacks it.

And it isn’t just the police. The courts are no better. Whilst reported rape cases have skyrocketed in recent years, prosecutions have sharply fallen.

As ever, we can see that the institutions of the capitalist state are only interested in protecting their own – and ultimately, in protecting the privileges, property, and profits of the rich and powerful.

Tip of the iceberg

Tragically, the murder of Sarah Everard is only the tip of a very large iceberg.

Millions of working-class women have been forced back into the domestic household due to the pandemic. This is accompanied by an increase in domestic abuse.

And this is not just in the UK. This is a worldwide trend, which has sparked protests in Mexico, Chile, Pakistan, Poland, and many other countries.

As capitalism goes into crisis, it is working-class women who are being made to pay. Female unemployment has increased sharply worldwide. In the UK, the full impact of job losses is yet to be realised due to the furlough scheme; but data shows that women are at greater risk of losing their jobs when these schemes come to an end.

The gains women have made in reproductive health are also under attack. The collapse of healthcare systems everywhere has removed access to many of the services that women legally have the right to receive.

In some countries, such as Italy and the US, access to abortions have either been restricted or removed entirely, as a result of the pressure on healthcare systems at the start of the pandemic.

This isn’t going to be a temporary setback either. For example, the sectors of the economy expected to be hit hardest in the post-COVID-19 world are hospitality and retail – both of which employ a large number of female workers.

Decades of progress have been undone in the space of months. This shows how fragile our freedoms, rights, and gains are under capitalism – a system in terminal decline.

There is nothing ‘natural’ about the oppression that women suffer. It is a product of class society.

It is the capitalists who benefit from our oppression and exploitation. For them, it means a cheap labour force; it gives them the power to push women in and out of the market as they please; and it allows corporations to objectify our bodies for their profits.

It is on these material conditions that our sexist, misogynist society is built.

The emancipation of women can never be achieved under capitalism, which holds working people – both women and men – in subjugation.

This system is simply not capable of permanently securing progress for the working class. In order to get out of the crisis that the capitalist system is in, the ruling class will go on the attack against every past reform that has been won through struggle.

However, we are reaching a tipping point. We are fed up.

What happened to Sarah Everard is something every woman lives in fear of. We are told from a young age: “Wear bright clothes”; “Walk down well-lit streets, keys in your hand”; “Don’t listen to music”; “Text us when you are home”, etc., etc.

This is no way to live. It shouldn’t be necessary. And we mustn’t accept it. Women are tired of this. Enough is enough.

As the slogan on Saturday’s demonstration stated: the system isn’t protecting us – it is killing us.

We need to unite and fight to bring down this whole rotten, violent, oppressive system. We need revolutionary change to overthrow the capitalist system and its violent, oppressive state – and to build a socialist society, based upon genuine equality, dignity, and respect for human life.

As we walked up Poynders Road we noticed heavy police presence. Twelve police vans lined the road and there were police helicopters circling overhead.

The streets were teeming with people carrying flowers. Whilst the majority of protesters were women, there was a large and varied demographic. Groups of young men, older women, and families with children were present. I would guess around 2,000 people were present.

The police have the nerve to threaten us and intimidate us.

We stopped off at the supermarket to pick up some flowers, and found that they had sold out due to high demand. As we made our way over the common, towards the bandstand (where the vigil was scheduled to take place before it was cancelled), we saw a large gathering.

The organisers of the vigil were not allowed to use a PA system, so the crowd shouted out the speakers words in unison so we could all hear. I was quite far back from the bandstand so I couldn’t see clearly. But from what I could gauge, the police were standing on the bandstand along with speakers and were taking the speakers away (possibly to arrest them) one by one.

As the vigil was going on, we noticed a ring of police officers were closing in on the protesters, causing them to push further forward. I suspect that this was an attempt of the Met police to have reasonable cause for arrest.

As the vigil became more vocal – with chants of “arrest your own”, “no justice, no peace”, and “shame” directed at the police – more officers filed through the crowd and began arresting speakers and protesters.

As the arrests took place, the crowd became silent, and everyone lifted their mobile phone torches in silent and peaceful protest. Only at this stage did a police officer rather furtively begin walking around the crowd telling us we were at risk of being fined or arrested under coronavirus laws.