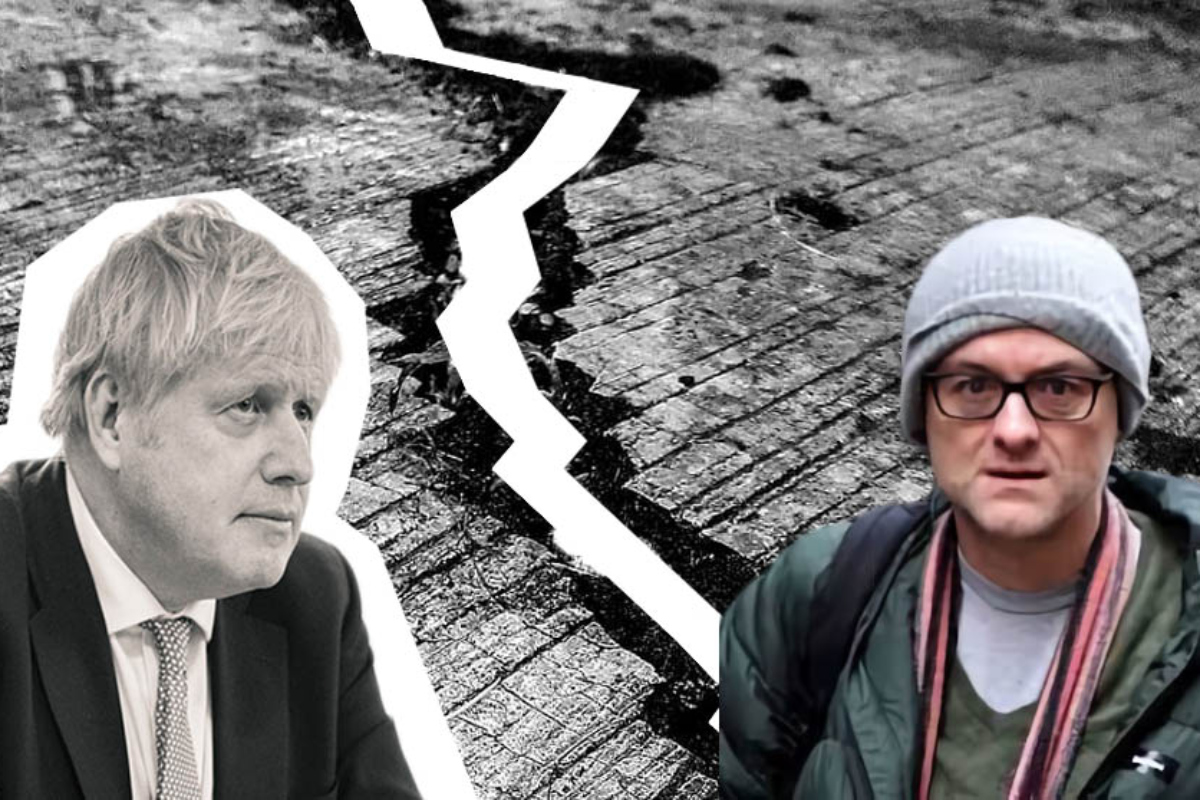 British Prime Minister Boris Johnson is in hot water over alleged remarks that he would rather see ‘bodies pile high’ than bring in lockdowns. Real or fabricated, it is clear that the Tories’ priority is profits over lives. Mobilise against this rotten government!

The drama has all the elements of a palace intrigue: the hubristic leader; the disgruntled Machiavellian former advisor; the ostentatious Marie Antoinette style partner.

And like the ancien régimes of old, the cracks and contradictions within this rotten Tory government are rapidly coming to the surface.

After a year spent exuding arrogance, incompetence, and callousness, all the chickens are now coming home to roost for Boris Johnson. Pressure is mounting on the Prime Minister, with the accusations and allegations coming in thick and fast.

The torrent of sleaze and scandal is immense: continued revelations of cronyism between the Conservatives and their big business chums; the potential misuse of public funds and illicit donations to pay for prime ministerial perks; and splits at the top between those at the heart of government.

At the centre of this messy web is Dominic Cummings, the PM’s former chief political advisor. This Rasputin-esque figure clearly has an axe to grind, after he and his clique were forced out by opponents in a coup last year, as the ‘sensible adults’ sought to take back control in Downing Street.

Whatever his motivation, the mud that Cummings is slinging is beginning to stick to Johnson, despite the Tory leader’s best attempts to duck and dive. 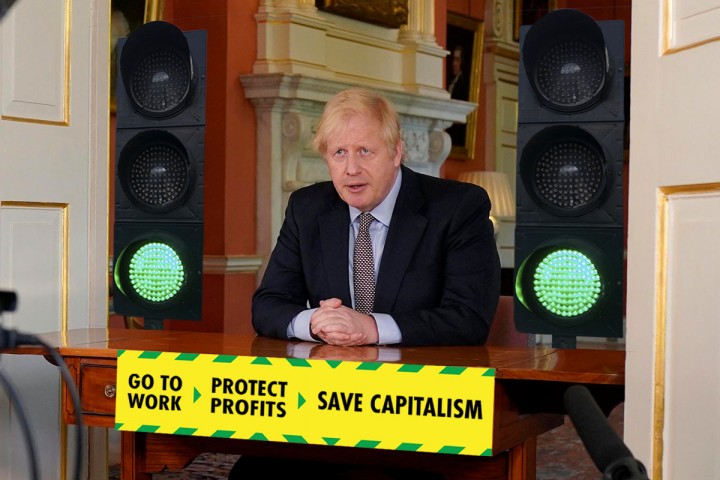 Regardless of their veracity, Cummings’ comments resonate with the public, precisely because they tap into widespread existing beliefs about Boris Johnson and the Tory Party – that they are out-of-touch, reckless, deceitful, and corrupt.

This is particularly the case in regards to the Prime Minister’s recent alleged remarks: firstly that, back in September, in relation to coronavirus, he would rather “let it rip” than impose a second lockdown; and later, that he would prefer to “let the bodies pile high in their thousands” than bring in a third lockdown.

We will likely never know if Boris Johnson – famous for countless other disgusting blunders and gaffes – really ever uttered these horrendous words.

The real issue, however, is not what he might have said, but what he certainly did. The Etonian PM may not have openly expressed his personal preference to see profits put ahead of lives. But over the last year, Johnson and his cabinet of criminals have repeatedly demonstrated their priorities on countless occasions.

Consistently dragging their feet over the introduction of restrictions; prematurely reopening the economy; and turning a blind eye as unscrupulous bosses put workers at risk: it has been clear from day one that this government will always put wealth before health.

And for all the back-slapping over the success of Britain’s vaccine programme – itself the result of planning and public ownership, not profit and ‘greed’ – the country still very much qualifies for the global ‘Super League’ when it comes to both COVID death tolls and economic collapse over the past year.

Similarly with accusations of corruption. From the Greensill lobbying saga that is enveloping Whitehall; to the alleged backscratching between the PM and infamous billionaire Brexiteer Sir James Dyson; to the latest row over Johnson’s lavish flat refurbishment: the whole Tory government stinks from top to bottom. 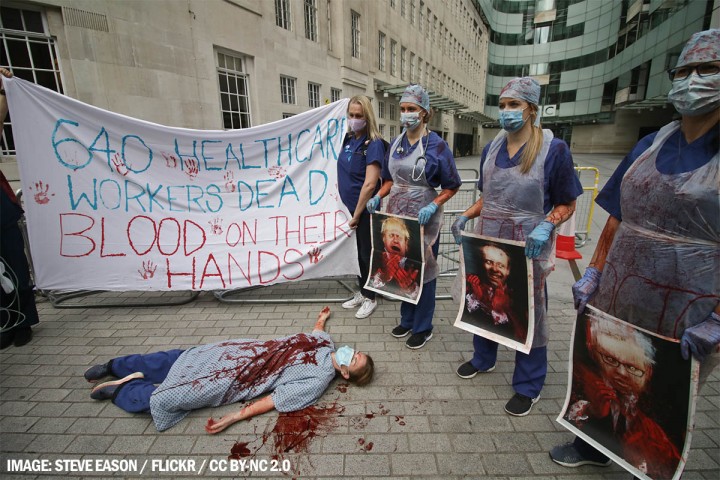 Boris’ cavalier and callous attitude – in relation to the virus, and more widely – reflects that of the whole ruling class, including those who now paint him as a pariah / Image: Steve Eason

No doubt there is a wing of the establishment that is taking this opportunity to clip Boris Johnson’s wings – as they have done previously – in an attempt to rein in the maverick PM.

After all, the demagogic Tory leader has never been a completely reliable representative of their interests: whether it be his prorogation of Parliament in 2019; or his curt “fuck business” comments in response to the capitalists’ concerns over Brexit.

But for all his ‘unique’ bluff and bluster, the truth is that Boris’ cavalier and callous attitude – in relation to the virus, and more widely – reflects that of the whole ruling class, including those who now paint him as a pariah.

The capitalist class put up little resistance when Johnson (and Cummings) pushed for a disastrous ‘herd immunity’ strategy at the start of the pandemic. The bosses had no qualms about the lax COVID restrictions on businesses. And various private parasites have been more than happy to accept fat handouts and generous government contracts.

This is certainly a rotten government, stuffed full of crooks and charlatans. But Boris and the Tories are ultimately the representatives of a rotten system – capitalism – that is corrupt to the core.

Step back from the cacophony of leaks, rumours, and recriminations, and one thing is clear: despite their 80-strong majority, Johnson and the Tories have all the hallmarks of a government of crisis.

Going into the May elections, the Tories have bragged about their ‘vaccine bounce’ in the polls. But this is far more fragile and superficial than it looks. Indeed, one recent Ipsos Mori survey shows that the Conservatives have dropped five percentage points over the past month, due to the endless drip feed of sordid stories.

And this, in reality, is the calm before the storm.

The crisis of capitalism — in Britain and internationally — is set to deepen and intensify in the months and years ahead. A tsunami of job cuts and austerity lies on the horizon, as the government life support is removed from the economy. And accompanying this will be waves of industrial struggle and social unrest — as can already be seen, with strikes and protests erupting across the country.

Meanwhile, Brexit, Scottish independence, and tensions in the North of Ireland threaten to tear apart the ‘United’ Kingdom, throwing the Johnson government from pillar to post in the process.

The truth is that the Tories would be languishing in second place, were there any genuine opposition. Instead, ‘Sir’ Keir Starmer has consistently pulled his punches, in effort to demonstrate to the establishment how ‘respectable’ a statesman he is.

The result is that Johnson and his ministers have been able to get away with blue murder.

Remarkably, it is Cummings – not Starmer – who is now calling for a public inquiry into the government’s handling of the pandemic. And this from a man who was whispering terrible advice into the ear of the PM throughout the first wave; who openly flouted COVID rules by driving from London to Durham and back in the middle of a lockdown! 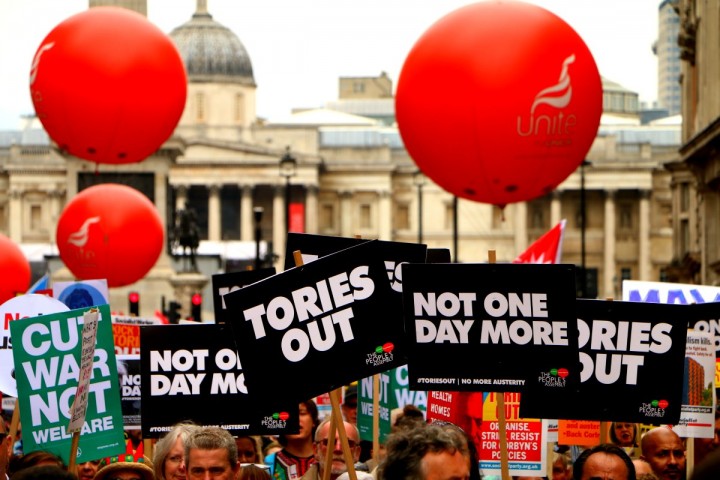 Only by consigning this criminal government – and the decrepit capitalism system that they represent – to the dustbin of history can we defend our lives and livelihoods / Image: Socialist Appeal

We may never know what is really said in the corridors of Westminster, or behind closed doors in Downing Street. But one thing is for certain: we cannot trust the Tories with our lives.

As Lenin famously remarked, splits at the top are often a prelude to titanic eruptions from below. It is imperative that the leaders of the labour movement take advantage of this political crisis to mobilise workers and youth, kick out the Tories, and fight for a bold socialist alternative.

Only by consigning this criminal government – and the decrepit capitalism system that they represent – to the dustbin of history can we defend our lives and livelihoods. Join us in building the forces of Marxism, in order to make this a reality.