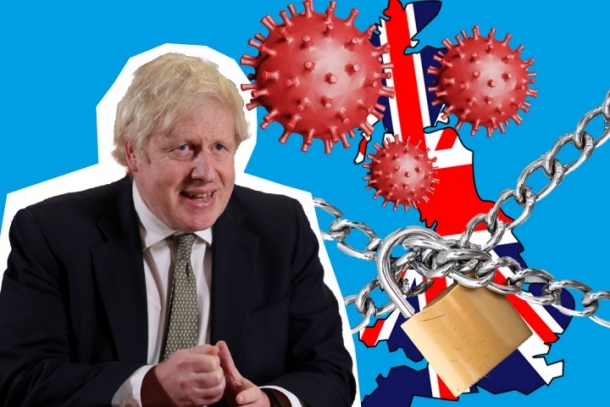 Johnson and the Tories have attempted to blame a new variant of the virus for the catastrophe that is unfolding. But it is their recklessness that has landed us in this situation. We need a bold socialist response to the pandemic.

Less than a week into the New Year, and already society has been thrown back to the darkest days of 2020. Last night, with COVID cases soaring, Boris Johnson announced a third national lockdown, with restrictions similar to those brought in when the pandemic first hit Britain’s shores almost nine months ago.

In reality, the situation is even worse now than then. As of Sunday, there were almost 25,000 COVID-19 patients in English hospitals – one third higher than that seen at the peak of the first wave; and a 29% increase in the space of just a week.

The death rate is also approaching figures from last April. Prior to yesterday, across the UK, over 500 COVID-19 mortalities had been recorded for each of the past six days, bringing the total death toll to over 75,000. Even with the latest measures, epidemiologists are now predicting that this number will rise to over 100,000.

Johnson and his ministers have blamed a new, more contagious strain of the virus for the recent chaos. But the truth is that it is they – the Tories – who are to blame. It is this rotten government’s recklessness, arrogance, and incompetence that has allowed the epidemic to repeatedly get out of control, with fatal effects.

There are now 5,861 Covid patients in London’s hospitals, almost 700 more than at the worst point in April.

There has also been a clear inflection point in deaths, which have climbed to almost 100 per day (last seen in April). pic.twitter.com/cf93fwUq6U

Yesterday’s lockdown announcement, for example, followed a painfully familiar pattern. As with the introduction of the last two national lockdowns, the Prime Minister has once again dragged his feet and ignored the advice of scientific experts, only to bow to the inevitable in the face of catastrophe.

The pursuit of a failed ‘herd immunity’ strategy last March led to a deadly week-long delay in bringing in the first lockdown, leading to thousands of avoidable deaths.

Boris then dithered again in the autumn. The PM initially rejected recommendations from SAGE – the government’s own Scientific Advisory Group for Emergencies – for a ‘circuit breaker’, made on 21 September. Eventually he caved in, with a new lockdown brought in six weeks later, in early November.

But by this time, the second wave had already taken off. And the virus has been raging across Britain ever since.

School’s out for winter 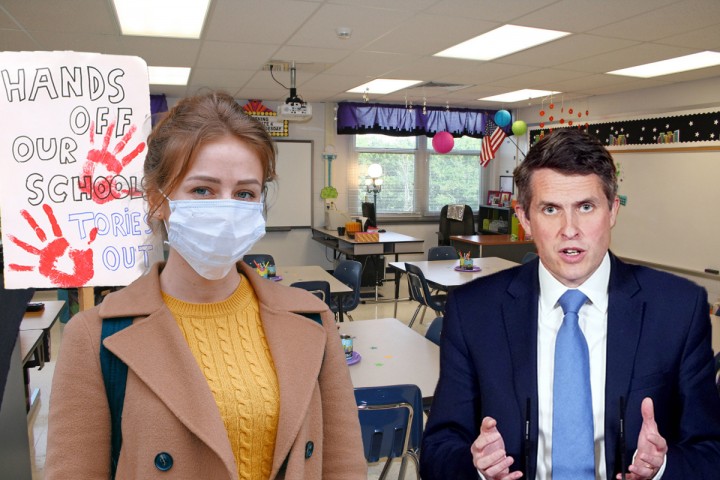 This time round, SAGE had stated back on 22 December that schools should remain closed following the winter holidays in order to slow down transmissions. SAGE has provided evidence that transmission amongst primary and secondary school children has been an important factor in the spread of the new COVID-19 variant. But Johnson and his education secretary, Gavin Williamson, refused to listen.

This push to keep schools open has nothing to do with defending education, and everything to do with defending profits. Crying crocodile tears about the welfare of students is just a cynical ploy to help keep businesses running. After all, school closures mean an estimated two million parents who potentially have to take time off work. And that equals a lot of lost profits for the bosses.

This is the reason why Boris Johnson had been insisting on the need for thousands of schools in England to open for face-to-face learning on Monday 4 January. But faced with a rebellion from teachers and parents, and with COVID levels spiralling out of control, the government has now been forced to U-turn in less than 24 hours, with remote education planned to take place until the February half-term.

Lockdown in name only

Even before this latest episode, the Tory government was already behind the curve. From the outset, for example, scientists had questioned the Prime Minister’s planned relaxation of restrictions over Christmas. In the end, Johnson abandoned the idea – but only late in the day, when families had already made plans, creating chaos across the country.

Coming out of the November lockdown, meanwhile, restrictions were clearly over-relaxed for the benefit of big business. Under pressure from retail bosses, the government allowed shops to open 24-hours a day in the run-up to Christmas, in an effort to lure in punters and boost profits.

This resulted in a farcical situation where households (rightly) could not mix with friends and family in their homes, but could freely rub shoulders with hundreds of strangers in major department stores and high street shops.

Similarly, as we enter a new lockdown, the bosses are again twisting the government’s arm in order to dodge restrictions. Construction sites, for example, which are breeding grounds for infection, have remained open throughout the pandemic.

And many businesses that were forced to shut in the first lockdown have managed to get themselves reclassified as ‘essential’ this time round. In other words, we are in lockdown in name only.

Of course, workers and councils have not been consulted about these decisions, which are instead being taken unilaterally by the bosses. 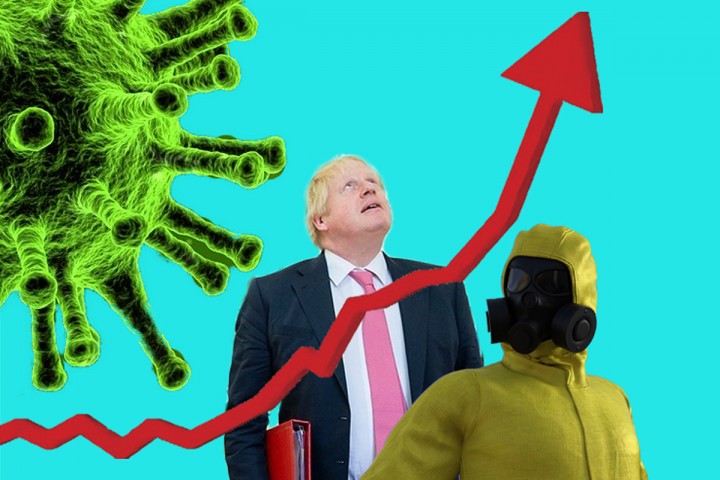 By allowing cases to rise, the impact of the virus’ exponential growth becomes ever more severe / Image: Socialist Appeal

The emergence of a highly infectious mutation has certainly exacerbated the situation. Such accidents, however, reflect an underlying necessity.

Mutations are an inevitable part of life. But the likelihood of a more dangerous strain developing is increased if the disease is more prevalent in the population. And the Tories have consistently enabled this by lifting restrictions prematurely, or by refusing to lockdown hard enough and fast enough.

The NHS is at breaking point. Hospitals have become war zones. In several trusts, over 50% of beds are taken up with COVID patients. And the situation is continuing to worsen by the day.

This is going to be one of the key charts to watch over coming weeks:

Covid patients are taking up an ever greater share of available beds in English hospitals, putting at risk the quantity & quality of care received by non-Covid patients suffering from other illness & injury. https://t.co/hwFvg67XEO

But the current crisis in the NHS was not created by coronavirus. Rather, the pandemic has exposed all the underlying and pre-existing weaknesses and cracks in the system.

For years, Britain’s public healthcare services have been eroded by underfunding, cuts, and privatisation. Over 75,000 beds have been cut in UK hospitals since the year 2000 – a 30% reduction. Above all, as working conditions and pay have come under attack, nurses and other key staff have left in droves.

As a result, the NHS is now chronically understaffed at this time of dire need. In turn, emergency resources and capacity – such as the temporary Nightingale hospitals – lie empty and unused.

“We can’t just create staff overnight,” stated Alison Pittard, dean of the Faculty of Intensive Care Medicine, speaking on the BBC’s Andrew Marr Show. “We can get more drugs, we can get more beds, and more equipment, but we can’t just get more staff.”

No trust in Tories

Another important factor behind the consistently high base level of COVID cases is the startling failure of the Tory government to bring in a reliable and robust test-and-trace system.

The whole test-and-trace episode has been a fiasco. Boris Johnson initially promised a “world beating” system. But instead, farmed out to Tory cronies and chums, the operation has been plagued with problems from the beginning, collapsing in early September as soon as the numbers with symptoms started to increase.

This, in turn, has undermined public trust in the government – particularly over its ability to carry out the mass vaccination programme that is needed to restore any sense of normality to people’s lives. 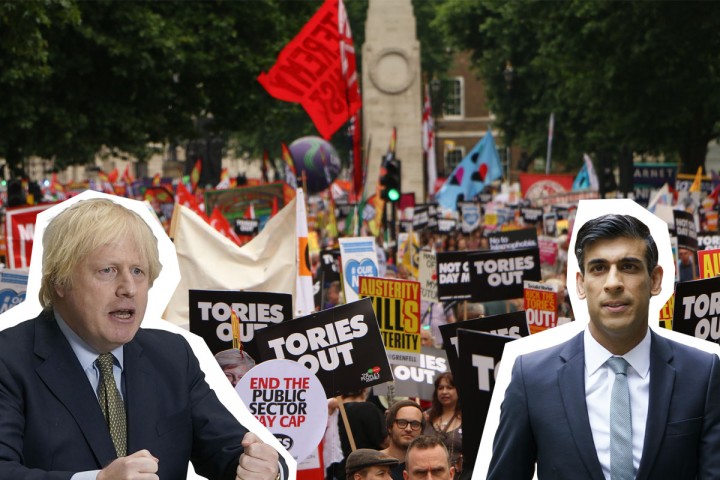 Of course, trust in the Tories has already been greatly eroded over the last nine months. Early on in the pandemic, the Cummings affair – with the PM’s former political advisor breaking government guidelines – shattered the mood of ‘national unity’ that Boris had attempted to cultivate.

Since then, the Tory government have only served to sow scepticism and demoralisation amongst the public with their actions. Contradictory messaging (“eat out to help out – but don’t socialise too much”; “go into the office – now work from home”), last-minute changes, and vacuous, waffling speeches from Johnson only add to the confusion.

Similarly, endless screeching U-turns by the Tories underline the sense that the government has lost control of the situation (not that they ever had it).

Ultimately, these zig-zags reflect the contradictory pressures upon the government – between defending lives and defending profits. At every step, Johnson has prevaricated as a result of the demands of the bosses and the splits within his own party, which go all the way to top.

Now the chickens are all coming home to roost for the Tory leader. Public support for the Conservatives has slumped, with recent polls indicating that Johnson would lose his 80-seat majority if an election were held tomorrow. And even his own MPs are turning on him, with two exasperated Conservative backbenchers submitting letters of no confidence in the PM yesterday.

Blood on their hands

In short, for all their attempts to shift the blame, it is clear that the Tories have blood on their hands.

Unfortunately, however, they have been allowed to get away with murder by an ‘opposition’ led by ‘Sir’ Keir Starmer, who has shown himself more eager to attack left-wingers in his own party, than Conservative ministers on the other side of the aisle.

The National Education Union, for example, has waged a battle to prevent schools from reopening in unsafe conditions. The NEU has had support from the wider trade union movement, and from the Labour left. But Starmer has refused to back teachers, instead insisting that he was not proposing any move to remote learning. We therefore had the sorry spectacle of the Tory Prime Minister being forced to support the union’s position before the Labour leader!

Instead of tail-ending the Tories, Labour should be siding with workers and the unions in order to land blows against this rotten government, and to protect both lives and livelihoods.

Clearly a lockdown is not a permanent solution to combating coronavirus. Rather, it is a necessary temporary measure, required to limit infections and deaths. Importantly, a lockdown provides a breathing space – an opportunity to bring in the systems and structures needed to keep a lid on the virus until a vaccination programme can be fully rolled out.

The Tories have wasted such opportunities during the last two lockdowns. Instead of listening to the advice of scientific experts and the suggestions of those who know best – workers on the frontline – the government have pandered to the bosses and picked fights with the unions.

To combat COVID, we need bold socialist measures. This means bringing all essential services and infrastructure under public ownership; putting workers in control; and expropriating the wealth of the super-rich to pay for this crisis.

Importantly, we cannot allow vaccination to be contracted out to the government’s chums in big business. Rather, it should be run through the NHS, under the control of doctors, nurses, and health professionals and experts. The necessary material, human, and financial resources should be put at their disposal to ensure the speediest delivery. And production should be ramped up through the nationalisation of Big Pharma and state intervention in all relevant manufacturing facilities.

At the very least, therefore, Labour and the trade unions should unite to launch a mass campaign around the following key demands: