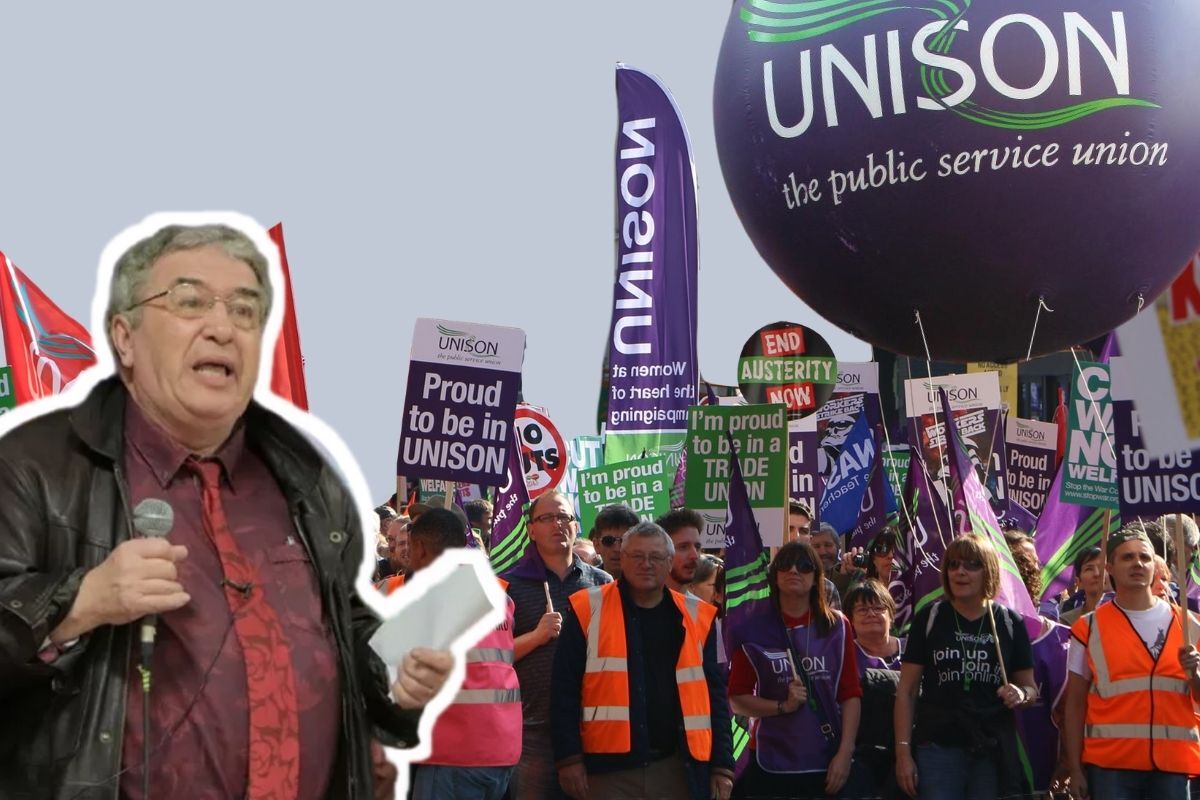 The President of Britain's biggest trade union, Paul Holmes, is fighting back against a vicious witch-hunt by the union's right wing. Unfortunately, the employers and union bureaucracy have been supported by the sectarian antics of the Socialist Party. We say: solidarity with Paul!

On Monday 6 September, Unison President Paul Holmes attended the first in a series of disciplinary hearings called by his employers, Kirklees ‘Labour’ Council. This comes after two years of Paul being suspended from his job and his union.

It is clear this right-wing council is out to sack Paul for his trade union role and activities. Scandalously, the Unison bureaucracy is colluding with Paul’s employer to victimise him.

Paul has been suspended for almost two years by both his employer and the union officialdom. If the allegations against him had any foundation, they would have been dealt with long ago.

He has no problem in answering any allegation made against him. To suspend anyone for such a length of time, however, is a denial of natural justice and due process. It is clear this is a case of politically-motivated victimisation.

Paul is the union’s leading socialist activist. He was elected as Unison President earlier this year – along with a left national executive committee – on a programme to fight cuts and privatisation.

The employers, a brood of right-wing local councillors, the government, and the union’s right-wing bureaucracy, are keen to discredit Paul and the left in Unison as a whole.

As a result, over 70 Unison activists and other supporters turned out last Monday to lobby the employers’ disciplinary hearing and show solidarity with Paul. This hearing was held in a private hotel three miles outside of Huddersfield, at taxpayers’ expense.

The protesters were also joined by a 120-strong online meeting, involving John McDonnell MP, Ken Loach, and many others.

Different groups, including supporters of Socialist Appeal, were also present at the lobby to show their solidarity.

There were some people, however, who were conspicuous by their absence. Amazingly, there was not a single full-time Unison official present at the lobby to express their support, even when the president of their union was under serious attack.

Members of the Socialist Party were also notable for their absence. The Socialist Party (SP) has four members on the Unison national executive committee (NEC), but none were present, despite other NEC members taking the time off work to attend.

Again, there was no one present from the National Shop Stewards Network, run by the Socialist Party, which prides itself on supporting workers in struggle.

You might think this is all rather strange. But there is a reason for their absence. The Socialist Party regards Paul not as a comrade to be supported, but as a political opponent to be destroyed.

For some years now, the Socialist Party has been on a downward spiral of sectarian opportunism, with a ‘rule or ruin’ approach.

In doing so, they have abandoned the united front – that is, working in a principled fashion with other socialists to maximise unity in the face of attacks from the employers and the government.

In the wake of huge splits in their organisation, and with a shrinking activist base, they are now completely obsessed with their own status and prestige.

In a desperate pursuit of positions and influence, they have been prepared to attack other socialists and even collaborate with the right wing in the trade union movement.

Increasingly isolated and marginalised on the left in Unison, they are now even prepared to climb into bed with the employer and union bureaucracy in their attempt to sack a fellow socialist and elected union president.

Prior to the Unison general secretary election in autumn of 2020, the left in the union chose Paul Holmes as their candidate. The Socialist Party proposed their own candidate, Hugo Pierre, but he failed to get the left’s support.

Instead of accepting the democratic result and standing aside to give Paul a clear run, however, they pressed ahead with their own candidate. This split the vote and allowed the right wing to narrowly win.

Having lost all sense of proportion, and abandoning the idea of the united front, they repeated this same tactic some months later. Rather than admitting their previous mistake, they ran candidates against other grassroots left activists in the elections for the national executive committee – again splitting the vote.

In these elections, the Socialist Party did everything possible to discredit Paul, including using slanders from his employers. For instance, a scandalous article appeared in their paper, The Socialist, that repeated unsubstantiated claims against Paul:

“So Paul Holmes was once again pushed forward [by the Left] despite his weaknesses as a candidate. These include the serious complication of him currently being suspended by his Labour council employer and the union for allegations of bullying and harassment, with those making them including female stewards in his branch.” (The Socialist, 9 September 2020)

This is incredible stuff given that Paul, himself, had been suspended since December 2019 and had not been told of any of the charges against him. And this from a group that remorselessly berates the behaviour of Labour councils for attacking workers’ rights and conditions!

The Socialist Party article sought to give the impression that these unfounded allegations were from none other than the Socialist Workers Party (SWP). Quoting the SWP’s article on the matter out of context, the SP remarked:

“This was even accepted by the SWP, who had publicly described them in the Socialist Worker newspaper as ‘allegations of bullying, that should be taken seriously and investigated’.”

To cover his tracks, SP author Glenn Kelly goes on:

“The Socialist Party is well aware of how the right-wing union officialdom can use allegations against left activists to conduct a witch-hunt, and will oppose any attempt to do so. However, these are serious allegations and need to be treated as such.”

This assertion comes despite the author knowing that Paul has consistently demanded that any allegations be put to him, so that he can respond.

The real intention of the article is revealed, however, when Kelly concludes: “In these circumstances it is irresponsible to put Paul Holmes forward as a left candidate.”

The aim of the Socialist Party article, therefore, was simply to raise slanders against Paul, so as to push him out of the race for general secretary, allowing their candidate an easier run.

The Socialist Party scraped the bottom of the barrel by using a quote from the Socialist Worker, which had clearly been ripped out of context and twisted to mean its opposite.

The original article in Socialist Worker was headed “No to witch-hunt of Kirklees Unison reps”. It was precisely an article in defence of Paul Holmes and the three other branch officers who had been suspended by the employers.

The SWP’s article explained: “All four have been suspended under ‘rule I’ of Unison’s rules – and to date have not been informed of what they are alleged to have done.”

It went on later to state, “It is necessary to deal with a complaint of bullying and it should be treated with the utmost seriousness.”

But the Socialist Worker article then continued to show the bogus nature of the claim:

“But this [allegation] comes from a council that has not suspended any manager despite allegations of racist bullying on the bins department.

“The action taken against Paul is clearly related to his trade union activities as head of a branch that fights cuts.” (our emphasis)

To underline the point, the Socialist Worker article quoted the council’s right-wing deputy Labour leader: “The council’s deputy leader recently commented, ‘There is a Father Christmas,’ when hearing of Paul’s suspension.”

Tomorrow his employer, Kirklees Council, is taking him to a disciplinary hearing.

We can’t allow bosses to get away with picking off key trade unionists.

The Socialist Party, by deliberately twisting these facts, has landed themselves in the same camp as the employers and union bureaucracy, who are conducting a witch-hunt against Paul Holmes.

Not only this, the Socialist Party have opposed and voted against Paul Holmes at every possible opportunity.

In the Unison NEC meeting to elect officers, the left put up Holmes for president of the union. The four Socialist Party members then stood a candidate against him, April Ashley, who only got four votes, as opposed to 32 votes for Holmes.

Socialist Party members on the Unison NEC also voted against him being elected to the General Council of the TUC.

Furthermore, within the International Committee of Unison, the left put forward Lilly Boulby for the important position of vice-chair. But Socialist Party members on that body voted for the right-wing candidate, which resulted in a tied vote. It was only the casting vote of the chairperson that resulted in the left securing the position.

Such antics only serve to weaken the left and play into the hands of the right wing.

The real betrayal here, however, is against low-paid union members, who are crying out for an end to cuts and privatisation – not for witch-hunts against their elected socialist leaders.

We therefore call on the Socialist Party to abandon this sectarianism, or face the claim of being bedfellows with the employers and union bureaucracy.

In the meantime, Paul Holmes, as President of Unison, is fighting for his job.

This attempted victimisation – by a right-wing ‘Labour’ council – cannot be allowed to stand. He needs to be defended all along the line.

Every genuine worker, trade unionist and socialist worth their salt must energetically step up their defence of Paul Holmes – suspended by his employers and the right-wing bureaucrats of Unison.

In the words of those demonstrators outside his disciplinary hearing last Monday: An injury to Paul, is an injury to all!