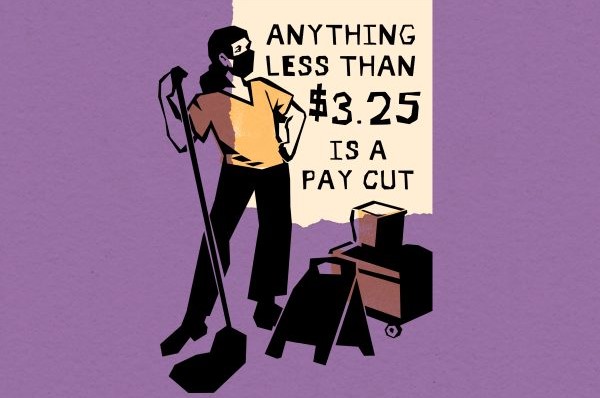 On Sunday, Nov. 20, the bargaining team for 55,000 Ontario CUPE education workers agreed to a tentative agreement with the Ford Conservatives, canceling their planned strike. The agreement, which will be put to members for a vote this week, has been widely criticized by hundreds of members of our union, as it only contains a $1 annual wage increase over four years.

This is a far cry from the $3.25 that our union had initially demanded to catch up with previous wages levels after more than a decade of cuts and months of high inflation. This is a poverty contract. Our leaders have made a mistake to accept it and as education workers we vehemently reject it and call on all workers in our union to vote NO!

This is the same deal the Ford government put on the table last week. Insultingly, the government only slightly raised their wage offer from 2.5 per cent to 3.5 per cent, after the illegal strikes pressured them to do so. The union leadership in turn called for an additional $25 million to ensure more staffing and better services at schools, which the government shot down. Rather than take the fight back to the picket lines, the union leadership has chosen to accept this poverty contract. This is a big mistake as it has allowed the government to call the union’s bluff on organizing a strike. 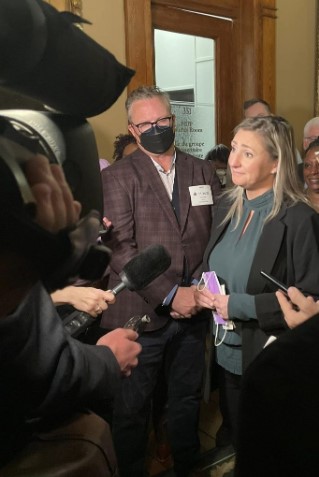 It is no surprise that the government is not interested in improving the quality of education for kids or the living standards for education workers. After all, this is the same government that implemented cuts to education that amounted to nearly a billion dollars. It is also the same government that wanted to legislate a poverty contract on education workers two weeks ago! Ford and Lecce are consistent in their opposition to workers getting decent living wages, and we can not assume better from them. Even Ontario School Board Council of Unions (OSBCU) president Laura Walton has said: “What we have been told by this government is that they are not willing to budge any further.”

Walton also posted a video on social media on Monday morning responding to workers in her union. In the video, Walton responds to a worker who says “this deal sucks,” saying: “…you’re right this deal sucks, absolutely this deal sucks, I can’t even say how badly it sucks because I’m in a public space.” Hundreds of workers commented on the video, overwhelmingly in favour of rejecting the agreement. The video has since been taken down by the union leadership.

Given the contradictory statements from Walton, this raises the question of what other union leaders involved in the negotiations have been pushing for.

If this agreement is ratified, we would be accepting poverty wages. As of Nov. 19, 2022, the average rent for a 1-bedroom apartment in Toronto is $2,450. Cost of living is climbing up on a monthly basis—even with this $1 increase, rent is unaffordable for the lowest paid sector in education. The original demand of the $3.25 (11.7 per cent) increase would help us catch up after decades of cuts and inflation. There should be no concessions on this raise because anything below it would be a pay cut, and we can not afford to get poorer.

The vote starts Thursday, but we can already see mass rejection of the agreement among the rank and file. A quick scan of the comments under Laura’s video can attest to this, with many workers saying they would vote no. Education workers displayed to the whole country the power of the working class when it strikes. We know we have the power to get our original demands from this government, and we are ready to return to the picket lines to get a contract that can guarantee better living standards in Ontario. It must not be forgotten that if education workers win a wage increase above inflation, so will the teachers and the rest of the public sector. This would be a collective win for the whole of Ontario’s working class. It would be a mistake if our union leaders were to dismiss the power of workers and not fight all the way. 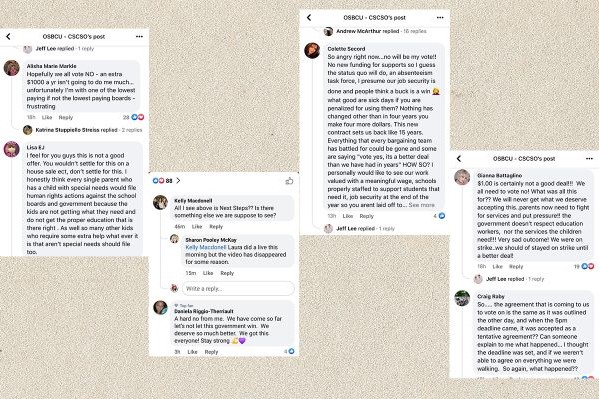 We can already see mass rejection of the agreement among the rank and file / Image: OSBCU, Facebook

In her statement to the press, Laura mentioned that if the deal was voted down by the workers, the bargaining committee would return to the table and continue to negotiate with this government. The fact is, the government has not moved an inch since the OSBCU submitted legal strike notice last week. Returning to the table without a strike would not result in anything better. The only way to break this impasse in negotiations is by returning to the picket lines in a militant strike as a means to put real pressure on the government. Ford has shown that this is the only language he understands.

Walton justified recommending this bad deal to the membership on the grounds of respecting the democratic will of the membership. We believe in rank and file democracy, but we think it is a terrible precedent for our leaders to recommend a contract that makes us poorer. The OSBCU could have easily organized an online assembly of members before Sunday to gauge opinions on whether to settle or strike. This meeting, although not a precise vote, would have at least been indicative of the views of the membership, and provided some genuine democracy before canceling the momentum of a possible strike and confusing members.

In a press conference, a reporter asked: “What do you expect members to do? Aren’t you, as part of the bargaining team, supposed to bring forward the best possible deal that you think is best for workers?”

Walton replied: “I think the key word there, Carolyn, is possible. And when you are being told by the government that there is no possible way that they are going to improve then you have to do the right thing as a leader, and bring it forth for the workers to use their voice.”

However, it was entirely possible to reject the government’s poverty contract and punish their aggressive behaviour on the streets. Additionally, making wage concessions from 11 per cent to 6 per cent to 3.5 per cent, weakened the reasons as to why workers would be on the picket lines in the first place. This second mistake put the union in a compromising position that it did not need to be in.

Since negotiations began, the government and its media have been relentless in their propaganda that 11.7 per cent is too much and will cost the province $20 billion. “This costs the taxpayer money, right?” says Lecce.  Why is Lecce so concerned about tax money going into education, but does not seem bothered about $30 billion unpaid taxes from corporate Canada? Canadian corporations have been avoiding paying taxes for years, while education workers were facing wage cuts. It is no surprise that corporate profits have shot up by 109 per cent in the last two years alone!

In the face of a recession, governments are refusing to hand a moderate 11 per cent wage increase to workers that provide one of the most essential services to society because it is “unreasonable and unaffordable.” Where was this noise when the CEOs of Canada’s top 100 companies got a raise of 32 per cent in 2021 alone? Where is the outrage when $306 billion is taken out of taxpayer money for warships? The problem isn’t money: the money exists. It is a matter of whose pockets the money goes into—Ford and Lecce think education workers deserve to work two or three jobs just to survive, while they fill up their own friends’ pockets.

There is no reason why workers should accept a poverty wage when they vote online this Thursday. The money exists to fund education. We have shown our willingness to fight with a 96.5 per cent strike mandate, and we’ve proven our ability to defeat the government when we forced them to repeal Bill 28. This is not the time to back down. 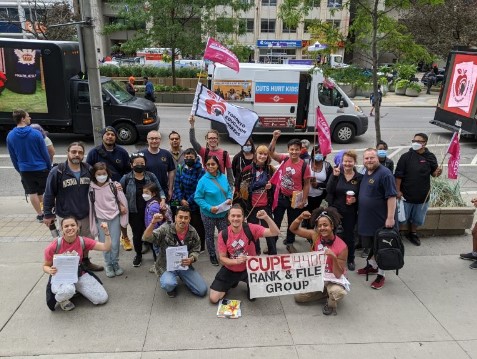 Calling off the pickets sends a sign: weakness invites aggression. We can fight and we can win / Image: Fightback

We have shown that the workers are strong and the government is weak. We need our leadership to have confidence that we can fight until victory. We must strike for a demand that is worth it, and $1 is a slap in the face! Ford’s refusal to go above $1 was an attempt to test our strength and ability to go back to the picket lines, and calling off the pickets sends a sign: weakness invites aggression. We can fight and we can win.

CUPE 4400 rank and file group calls on all education workers to vote NO to anything less than $3.25. While we wait for the vote results to come out and a strike notice to be served, we need to organize amongst ourselves for the next steps. Picket captains, co-workers and all other allies should join a meeting of the CUPE 4400 Rank and File group this weekend to discuss which way forward to win.