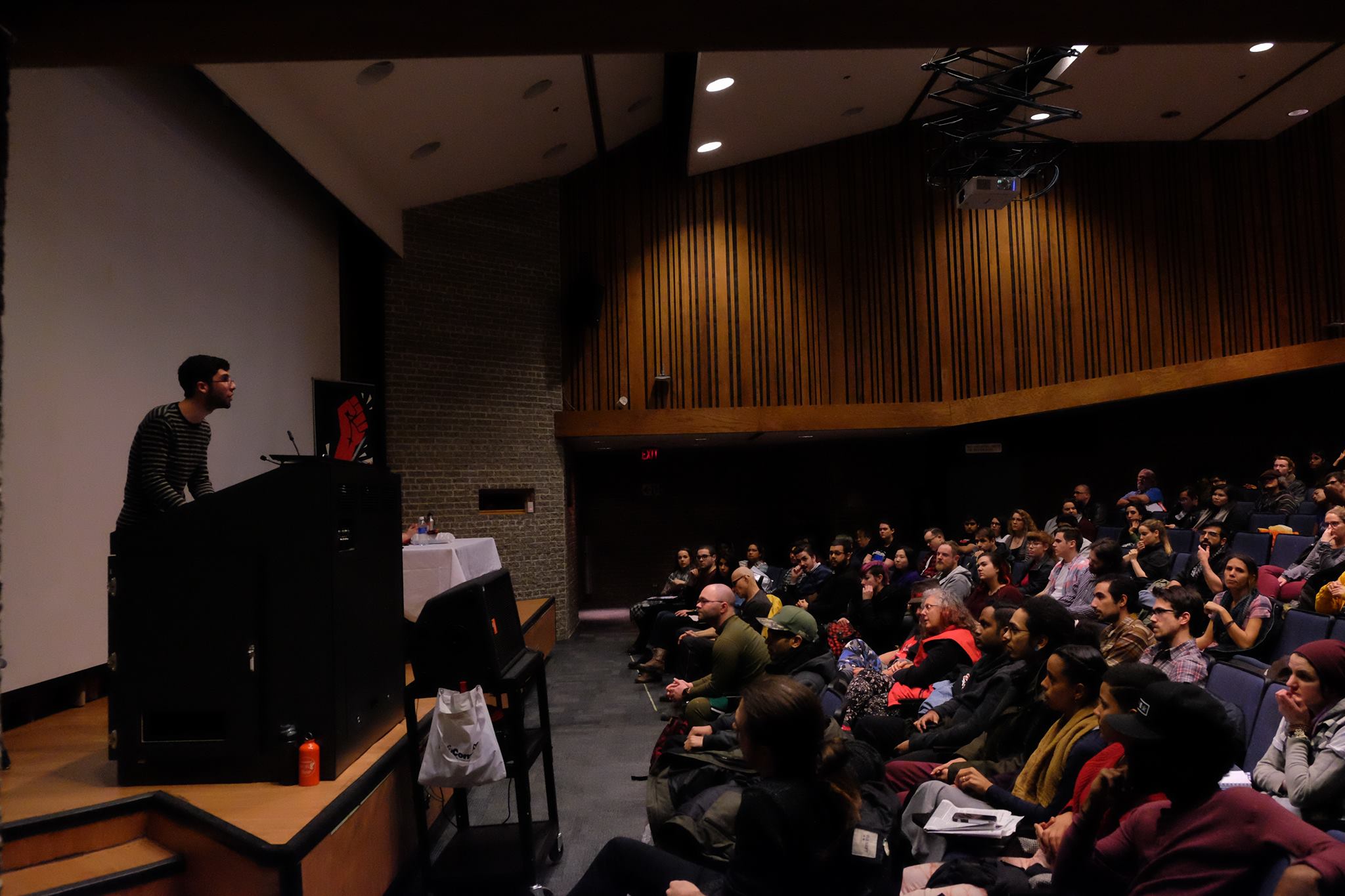 Over 100 people gathered on U.S. Inauguration Day for the United Against Trump Town Hall held at Ryerson University in Toronto, Canada. The event was hosted by a coalition of organizations led by the Canadian section of the International Marxist Tendency, Fightback. Others who supported the event included the Canadian Union of Postal Workers (CUPW), Justice for Migrant Workers (J4MW), the Canadian Federation of Students Ontario (CFS-O), the Canadian Union of Public Employees Ontario (CUPE) and the Ontario Coalition Against Poverty (OCAP).

The event brought together workers, students and activists from across Ontario, including many belonging to marginalized groups that have been targeted by Trump’s sexist, racist, anti-immigrant, homophobic and transphobic rhetoric. The aim of the town hall was to form a broad-based coalition of organizations and communities to fight Trump-style politics here in Canada. Although there remains much to be done, we can at least say that the wheels have been set in motion.

The mood at the town hall was undeniably radical. The event featured three panel speakers, each of whom took aim not only at Donald Trump, but at the capitalist system which gave rise to him. The first of these speakers was Mike Palecek, National President of CUPW. Palecek’s participation was an encouraging sign that it is possible to build unity between the labour movement, students and marginalized layers of the working class.

Palecek spoke at length about the polarization of American society, the dissatisfaction with the status quo, and how these things combined to produce a Trump presidency. As he pointed out, the politics of the establishment were helpless against right wing populism. With the absence of any outlet on the left, the path was laid clear for Trump’s victory. Palecek suggested that the only way to prevent Trump-style politics from surfacing in Canada was for workers and students to organize, mobilize and agitate for socialist politics. The power of the working class, he pointed out, is far greater than any right wing demagogue. With that, he made an impassioned appeal for the audience to join the fight.

Palecek was followed by Gabriel Allahdua, an activist with Justice for Migrant Workers. Originally from St.Lucia, he has spent the last five years as a migrant worker on a farm in Lemington, Ontario. Allahdua described the treatment of migrant workers in Canada as “the bottom line of capitalism,” and drew parallels with the anti-immigrant policies espoused by Donald Trump. He explained how migrant workers are denied the same basic rights as other workers, including the right to vote and ability to unionize. He said that if migrants don’t speak out, it’s only for fear of deportation. “Isn’t that Donald Trump?” he asked. Except this wasn’t Trump’s America that he was talking about, but Trudeau’s Canada.

The final speaker of the night was Jessica Cassell, an organizer and editorial board member with Fightback. Cassell continued where Allahdua left off, putting Canada up to the harsh mirror of reality. “Just like our neighbours to the south, Canada is based on colonialism, racism, exploitation and oppression,” she said, continuing on to highlight that similar conditions which allowed Trump to take power exist here in Canada. Canada even has its own version of Trump, with “Dragons Den” reality TV “millionaire” and pro-business commentator Kevin O’Leary entering the Conservative leadership race. People are seeking an explanation for why their living conditions continue to decline and in lieu of a revolutionary alternative, a layer of people will turn to the right-wing explanations which blame immigrants, women, racialized people, and LGBTQ  folks, in order to distract and divide the exploited and oppressed majority from the real root of the problem: the capitalist system. Cassell explained that simply voting for the perceived “lesser evil”, whether it be the Democrats in the United States or the Liberals in Canada, only benefits the ruling capitalist class and lays the ground for the bigger evil to come to power down the line. What is needed is a mass movement for the socialist transformation of society to unite all layers of the workers and youth, including the most marginalized, in the struggle for a society that prioritizes human need over corporate greed!

After the panelists spoke, members of the audience were invited to speak from the floor. While several commented on the threat that Trump-style politics posed to workers, youth, immigrants, women, racialized groups, LGBTQ folks and the environment - there was a general mood of enthusiasm that we can - and will - fight back. Others highlighted that Trump’s presidency and its reflection in Canada and abroad have millions of people all over the world questioning capitalism. The need to get organized and for unity came up repeatedly. Cheri DiNovo, NDP MPP for Parkdale-High Park, spoke and made an appeal for the young people in the room to take up the struggle for socialism.

Halfway through the event, a weak attempt at sabotage was made. A fire alarm was pulled (not minutes after two obvious Trump supporters exited the lecture hall) which forced us to evacuate the room. The fire department later admitted it was done intentionally. Rather than be disoriented, we evacuated the building in an orderly fashion and gathered people outside where we took a vote to continue the discussion on the streets. It wasn’t very long before we were readmitted into the building where we continued the discussion; our spirits and determination having only been risen! This incident shows how weak and cowardly the forces of the “alt-right” really are in the face of the organized workers and youth.

The discussion concluded on a highly optimistic note. While Trump and his reflection in Canada represent a significant challenge to workers and youth, there has not been a time of such deep questioning of the capitalist system since the 1930s. Trump’s rise to power is itself a sign that we have entered into a turbulent period of sharp and sudden changes, as the masses begin to seek out alternatives from the right and the left. It is the historic task of the Marxists to provide a genuine socialist alternative with a concrete program and way forward. If we are educated, organized and militant, we can succeed not only in bringing down the Trumps and Kevin O’Learys of this world, but the whole capitalist system of exploitation and oppression. If you believe in Fightback’s vision for a better world - one where the  vast wealth that exists is put to use benefiting the majority instead of a small parasitic minority - then reach out to us at fightback@marxist.ca or (416) 461-0304 to join the fight for socialism!