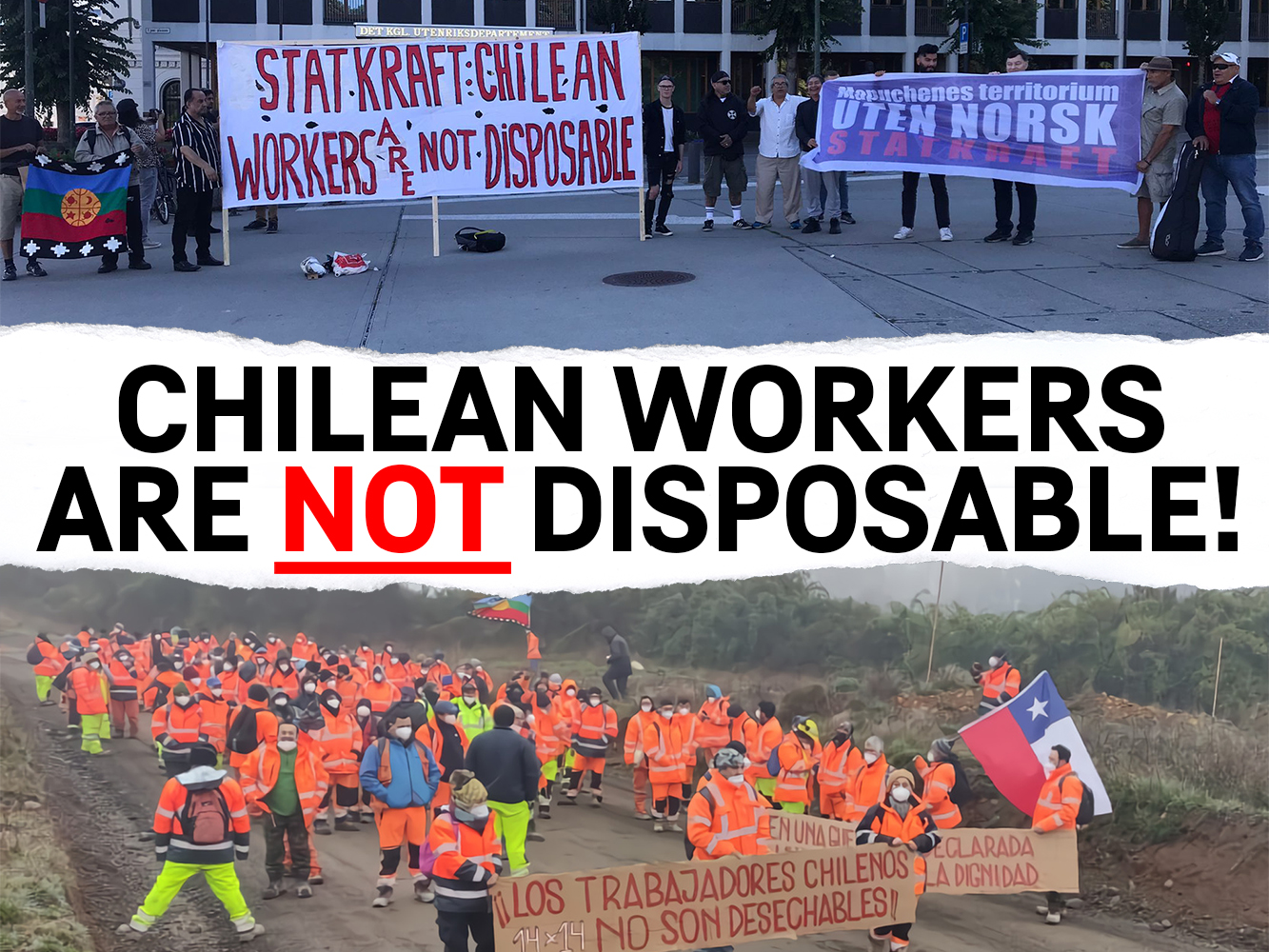 The Norwegian state energy company, Statkraft, has attempted to impose an extremely exploitative contract on construction workers involved in the ‘Los Lagos’ hydroelectric project in Chile. The workers of SINACIN union are fighting back. Meanwhile, comrades from the IMT have led efforts to build international solidarity for the workers, whose struggle has found a sympathetic echo in the Norwegian labour movement. We provide a report here by comrades of the IMT in Chile and Norway.

On August 5, a delegation of workers from SINACIN, the Chilean Industrial Construction Union, demonstrated in front of the Norwegian embassy, demanding the consul intercede to make the company sit down and talk with the union.

The president of SINACIN explained: “We want the Norwegian consul to intercede so that the bosses of Statkraft receive us. We send them a letter. We have not taken any forceful action as of yet. We have been holding assemblies for two hours every day, which somewhat interrupts the process at the working site. But we have yet to take any more action... We describe ourselves as a union that negotiates a great deal, and that is very good at reaching agreements. But we have not forgotten how to fight.”

Statkraft is a Norwegian, state-owned energy company, and is one of the largest renewable energy providers in Europe. They have operated in Chile since 2014, and have hydroelectric, wind and solar projects. Now Statkraft-Chile has plans to become the main renewable energy producer by 2026, increasing its production by up to ten times. The ‘Los Lagos’ hydroelectric project is located on the Pilmaiquén River, its construction having begun in 2019. Three years earlier, in 2016, the company suspended the “Osorno” project on the same river, on account of the fact that the reservoir affected an important indigenous Mapuche-Williche ceremonial site. Now the company says it has redesigned the project to take into account the needs of the communities.

In the ‘Los Lagos’ project, the subcontracting company, ‘Consorcio BOV SPA’, at the request of the Norwegian company, is imposing a shift change from 14x14 (14 days of work and 14 days of rest), to a regime of 10x5. Given the remote nature of the works, this seriously affects the amount of rest the workers are able to get. It also exposes workers to a higher likelihood of infection by SARS-CoV-2. To this we must also add that the company has withdrawn all protection measures, such as tests and physical distancing in buses and dormitories. The company refused to meet with the workers, while the Norwegian consul has delayed meetings indefinitely. 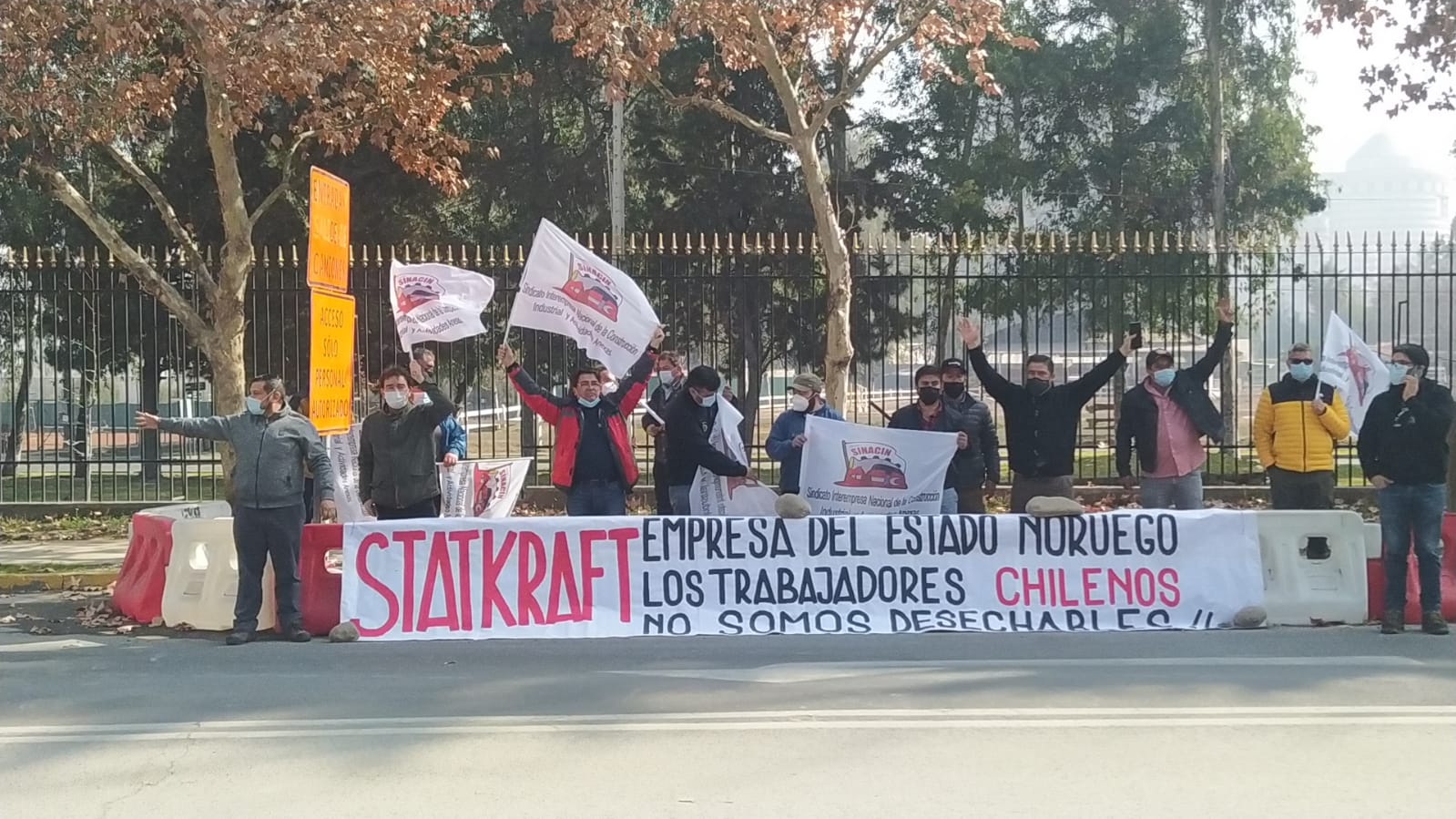 Members of the SINACIN union demanded that the Norwegian consulate intervene to bring the state company, Statkraft, to the negotiating table over attempts to impose exploitative contracts. They were initially met with a wall of silence / Image: SINACIN workers

The President of SINACIN addressed the Statkraft workers in these terms: “First, they should know that what we are fighting for is fair. Given the distance from the site, the 14x14 day allows us to have better rest times. Second, they must understand that what we are asking for is to be able to take care of our elderly. The measures that the company is applying are purely to save money. They are saying that Covid-19 is over here. In other words,  that we have returned to normality... a contract is being imposed on us unilaterally. We are being told to either sign the 10x5 contract, or leave. This is blackmail.”

The Marxists of the IMT-Chile support the just demands of SINACIN and have mobilised comrades in solidarity internationally. Our comrades from the International Marxist Tendency in Norway, Sosialistisk Revolusjon, have contacted the Norwegian trade unions ‘EL og IT Forbundet’, which organises Statkraft workers, and ‘LO i Oslo’, providing them with translations of the interview and letter from SINACIN. The union representatives showed immediate sympathy with the workers in dispute, and sent motions of solidarity. In addition, press releases have been distributed to the Norwegian and Chilean media. On Friday 20 August, Sosialistisk Revolusjon convened a demonstration in front of the Ministry of Foreign Affairs in Oslo, in solidarity with the workers in Chile associated with the ‘Los Lagos’ project, which was attended by representatives of Norwegian trade unions and groups of support for the Chilean and Latin American struggles and the Mapuche-Williche cause, as well as Rødt (Red Party). 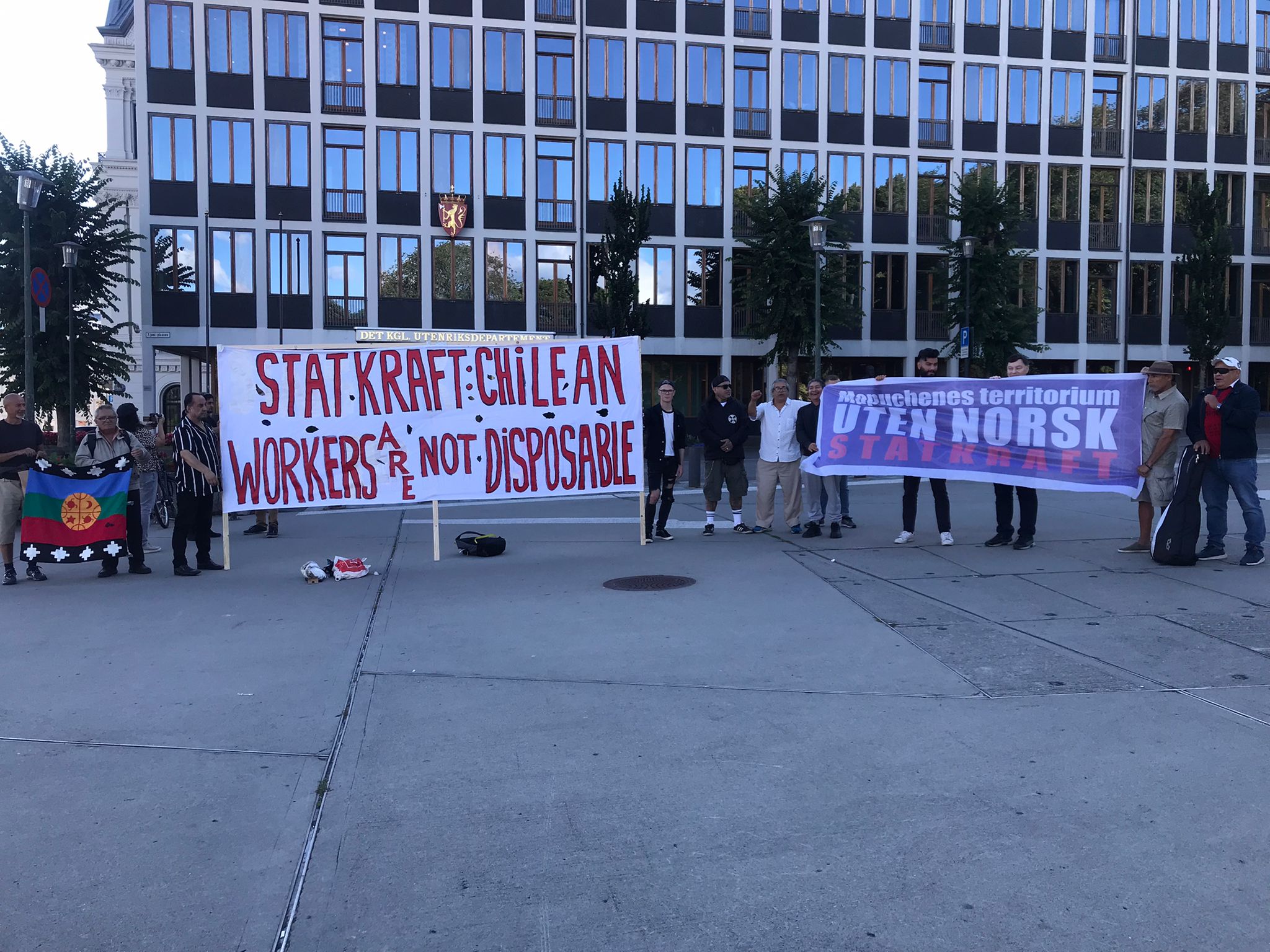 The comrades of the IMT in Chile and Norway organised an international solidarity campaign, which found an echo in the Norwegian labour movement, with protests organised in solidarity with the SINACIN workers / Image: Johannes Rekkedal

At the same time, workers in Chile began hardening their positions, refusing to board buses taking them to their workplaces, and instead choosing to march. Later, access to the facilities was delayed by demonstrations at their entrances. Internal and international pressure had its effect. The workers were first received by the charge d'affaires of the Norwegian Embassy in Santiago, and finally Statkraft agreed to negotiate with the workers. However, Statkraft has washed its hands of responsibility, transferring responsibility to the contractor company ‘Consorcio BOV SPA’, something which SINACIN has refused to accept. Meanwhile, the shift changes have been postponed for 40 days. The fighting spirit of the workers continues to rise, and the conditions for an indefinite strike are being prepared. Given the isolation of the facilities, disseminating news of this dispute has been essential to give visibility to the protest actions, raising the morale of the workers.

The methods of the state company Statkraft are exactly the same as those of any multinational; they hire local companies to do their dirty work for them, dispensing with liability and claiming to be impotent to improve working conditions. However, as the workers know, it was under the pressure of Statkraft that the subcontracting company changed the shifts, which were negotiated with the SINACIN union.

The workers at the 'Los Lagos' site hardened their attitude. They refused to board buses and instead took part in marches and disrupting the site entrances / Image: SINACIN workers

Many, if not all of Statkraft’s projects are located in reclaimed areas in southern Chile, where indigenous Mapuche-Williche peoples have long been oppressed and displaced from their territories, which have been militarised of late to protect the interests of extraction companies. Violation of ancestral rights is commonplace under capitalism, and Norwegian capital is no less guilty of these practices. This is Norwegian imperialism. We say: no support for Norwegian imperialism!

The establishment of Statkraft is just a new phase in the entry of Norwegian companies into Chile, which began several years ago. Norwegian capitalism has big ambitions in Chile, and a gigantic new investment package is already in motion in the electricity and salmon industries. Two years ago, King Harald V visited southern Chile, and, with affected sentimentality, expressed how those fjords reminded him of the Norwegian fjords. That visit was intended to disguise the fierce lobbying in favor of the Norwegian salmon transnationals. In South America, these companies have carried out all the practices they are forbidden from doing in Norway, at the expense of the environment, and with extreme exploitation of the workforce. The destruction of the fjords of Patagonia would represent an unprecedented act of vandalism!

The development of renewable energies must not be carried out at the expense of the worsening conditions of workers. Nor can these projects be allowed to violate the access of indigenous peoples to their ancestral land and water resources, which allow them to reproduce their culture. ‘Green capitalism’ is no solution, but rather a facade for the continued exploitation and enrichment of a small minority. Today we are living through an ecological and climate crisis, economic planning of the energy sector is an urgent necessity, in which the working class and communities would democratically control and plan the economy in the interest of the majority. With this perspective, building international class solidarity is key to strengthening the organisation of the working class.

The solidarity demonstration was a confirmation that the working class is international. Recent decades of globalisation and extreme exploitation of labour in the so-called ‘Third World’ have been a global phenomenon. For the capitalists, we workers are nothing more than raw materials in production. It is the capitalists who benefit from separating us along national and ethnic lines, the separation of the working class into a wealthier and an extremely exploited and poorly paid layer only assists the general depression of working conditions for all, in which the capitalists pit one party against another.

We give our full support to the workers associated with the ‘Los Lagos’ project. Norway has ratified ILO Convention 154 on the promotion of collective bargaining. This also has to apply to Norwegian-owned companies abroad.