Details
In Defence of Marxism
23 December 2008 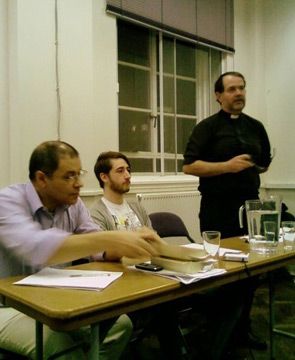 With Christmas just around the corner we present the final meeting of the ULU Marxist Society, which celebrated the end of a successful first term of meetings by hosting a debate on Marxism and Religion.

Under the heading 'Christianity - Capitalist or Communist?' spoke Dr Peter Hatton, Methodist Minister. He holds degrees in English Literature and Theology from Cambridge and Bristol and a Doctorate from Birmingham.

In a recent book he argues that the wisdom literature of the Hebrew Bible/OldTestament aims to provoke the reader into a critical, dialogical engagement with society and the world.

Also speaking was Fred Weston, editor of www.marxist.com and leading member of the International Marxist Tendency. He is a founder of the Italian Marxist paper Falce Martello, and has written extensively on many different subjects including most recently China's long march to capitalism and The Return of Karl Marx .

Both speakers introduced for roughly 20 minutes each. Afterwards there were questions and contributions from the audience on such questions as the morality of violence, the evidence or otherwise for the existence of God, and even on marriage between Christians and Socialists (!) before both speakers were invited to conclude and sum-up.

Socialism and Religion by V.I Lenin in 1905

Book One: The Person of Jesus by Karl Kautsky

Christian fundamentalism – the theology and vision of Josef Ratzinger by Josef Falkinger, 07 December 2007

From the Marxist Education Plan on Religion :

Socialism and the Churches - Rosa Luxemburg

The Attitude of the Workers' Party to Religion - Lenin

Their Morals and Ours - Leon Trotsky