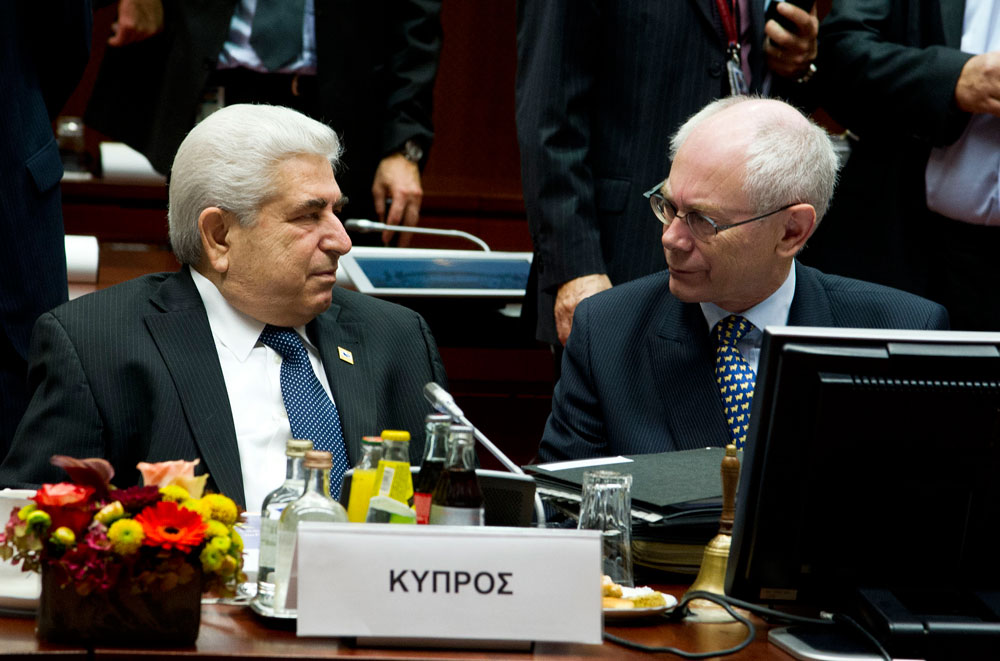 Cyprus is a small rarity in the Mediterranean sea. It's a country where the Communist Party (Workers' Progressive Party, AKEL) has strong roots in the labour movement and society as a whole and holds the Presidency of the Republic, as well as being the first party in parliament.

AKEL did suffer a split in the 1990's like most communist parties at that time, but the majority of members and trade union leaders stayed away from the eurocommunist tendency that today is an extraparliamentary force with a minister only thanks to the popular frontist position of AKEL.

Cyprus joined the European Union in 2004 as one of the wealthier countries of the block of 12 that joined at that time. Cyprus was more known as a tourist destination and a tax heaven than anything else, except for the fact that a part of the island has been occupied by the Turkish military since 1974. It remains a tax heaven, despite the introduction of the euro and its 'communist' President.

Demetris Christofias won the elections in 2008 on a programme of peace talks with the Turkish Republic of North Cyprus (the territories occupied by the Turkish army and only recognised by Turkey) and social progress. AKEL's leaders were promising to maintain the welfare state in the face of the demands of the employers' federation and its closest political party DISY (the party of the Cypriot ruling class).

AKEL's economy policy has been one of promising a lot to everyone as long as they could. In April they had passed a tax on high cylinder cars (a tax for the rich, cars with more than 3000cc) and another tax on apartments of more than 300 square metres, "The objective being to increase state revenues with sweet measures for the majority of the population and surely for the most vulnerable groups". But two months later they were voting with DISY for an amnesty for tax evaders (the second in 10 years) that only declared 6% of expected income. In Cyprus the liberal professions, the electoral base of the right wing, hardly pay any taxes.

Several months ago Cypriot banks started to buy Greek bonds (very cheaply) and now they face a massive problem. The Cypriot government tried to obtain a loan from the Russian government unsuccessfully and applied to the ESM (European Stability Mechanism) for an amount of 4 billion euros (a quarter of GDP) but with the so-called hair cut the banks lost millions that the government bailed out. Now they are having to ask the IMF (in the form of the Troika) for about 20 billion euros.

So, Christofias appeared on television a few days ago to explain that austerity, i.e. cuts in pensions, cuts in wages, freezing the sliding scale of wages, cuts in public sector jobs, and privatisations are the lesser evil. Many workers and trade unionists, and AKEL members, will wonder what is the worse evil? The polls are giving AKEL less than 20% in the coming elections while the right-wing DISY is on 35%. This alone should be an indication to the leaders of AKEL that the policies that the right-wing social-democracy and bourgeois parties are applying all overEurope should not be the policies of a party that calls itself communist!

What now for AKEL?

The politics of AKEL, in words a very orthodox communist party, are those of reformist social-democracy. While this was just about acceptable to the eyes of many during a period of economic boom, getting back into office during a severe crisis of capitalism is not going to be an easy ride. In fact, any government that pretends to be communist or socialist and sits on a time-bomb of tax fraud, corruption, money laundering and low taxes for multinational companies was bound to crash against reality sooner or later. Last week the government party, AKEL, discovered this in a bitter way, with Christofias' speech.

During the announcement of new measures there has been an all out transport strike in the island for several days over unpaid wages of the previous month, organised by the communist oriented PEO transport union (OELMEK). At the same time teachers and agricultural workers have clashed with the government over its policies, even occupying the Ministry of Agriculture. The situation is leading to a clash between the government and the unions.

It is clear to them that the banks that were speculating during the first instances of the so-called Greek debt crisis are those responsible for this situation, but those who are being asked to pay for this are the workers, just like in Spain, Portugal, Greece, Ireland... The difference here is that sitting in the Presidential chair we have a communist. The Cypriot example should be a warning to the European left about their wild dreams of 'managing capitalism in a humane way' or 'controlling the financial markets' through taxation.

The Government should have nationalised those banks that were bankrupt, and with this, they could have nationalised the entire financial sector, migrating back home those billions sitting happily in other tax havens. AKEL should not have stalled for four years in a time of the worst economic crisis ever; it should have used the mass popular support it has to develop the economy by seizing land and industries and developing its own resources. The off-shore gas fields discovered in its territorial waters should have pushed the government to find economic partners other than countries such as Israel and the multinationals that have pushed for war in Libya over resources, companies such as ENI and ESSO.

Cyrpus is an occupied dependent country, so the only way of achieving a policy that defends the workers' interests is by turning to the European working class and not reaching gentlemenly agreements with this or that imperialist power.

"We could do better leaving the euro" declared last week Andros Kyprianou, General Secretary of AKEL, the Communist Party, which the current President is a member of. Kyprianou was reacting to the possibility that the EU could demand more austerity linked to cuts in public services, pensions and salaries. (The Morning Star, 23 September). These words show how much the situation has evolved.

This Cypriot tragedy, a different version of the Greek one, shows how a party like AKEL that could offer an example to the working people of Europe is going to commit political suicide. It also exposes that false and ridiculous debate presently taking place within the ranks of most of the European left about staying or leaving the Euro as if it were a magical solution to end the crisis. In Cyprus we see highlighted how simply staying in or just leaving the EU does not solve the question.

The policy of AKEL, i.e. the lack of a coherent communist policy, would have had a similar outcome whether in the euro or with the Cypriot pound. To remove capitalism a government needs to take control of the speculative and financial sector, it is not just an issue about your currency. The promises of AKEL that the economic measures should be negotiated with the EU bodies and that any changes should be shared out between all and certainly not put on the back of the workers (as you can read here: Chypre : un outsider à la tête de l’Union européenne) have been forgotten by the Realpolitik of the President. Within the Eurozone, as in this case, or out of it, without nationalising the banking and financial sector, the room for manoeuvre of the government is very limited. This is also a great lesson to be learnt by many in the European left (specially the leaders of SYRIZA in Greece).

Now Cyprus is set for a hard ride of cuts, austerity and increasing poverty. The likelihood of having a right-wing government is also high and austerity will deepen, but the resistance to such policies is growing, starting with the unions, specially the communist union confederation PEO and the public sector federation PASYDY. This will have an impact on AKEL's members. To be a communist is not to be infallible (this is exclusive  privilege of the Catholic Church); to be a communist is about learning from one's own mistakes. AKEL needs a Marxist programme to get out of the crisis, which means removing capitalism once and for all.