Share
Tweet
After a period of youth protests that have shaken Italy, last Friday the workers responded well to the general strike called by the CGIL trade union confederation against the economic policies of the Berlusconi government.

The struggle against the Berlusconi government in Italy has entered a new phase with the general strike called by the main trade union confederation, CGIL, which was held on December 12th. After several months characterised by a broad mobilisation of the youth and some layers of workers against privatisations and cuts in the school and university system, the working class has started to put its mark on the situation, coming out in force.

The strike was called to protest against the government's economic policy in the face of the present crisis. For Italian capitalism, the world crisis comes on top of special national problems. Italy's is a declining economy, bogged down by corruption, parasitism and backwardness. Berlusconi, in close connection with the bosses' associations, has managed to divide the trade union movement, winning the support of two trade union confederations, the CISL (Christian) and UIL (left-of-centre), and "isolating" the CGIL and smaller militant trade unions. His plan is the destruction of the national collective bargaining system, further cuts in welfare, and further privatisations.

Success of the strike

For the CGIL leadership, this strike was an opportunity to break out of its "isolation" and demonstrate the massive support it enjoys among the workers. The CGIL leaders, who were prepared to sign any kind of deal behind the workers' backs during the previous centre-left Prodi government, tend to adopt a more militant stance when the Right is in power and, most importantly, threatens to exclude them from negotiations. Scared of losing control of the social forces they evoke, when they finally do call a strike, they do so in the most cowardly manner, not as the first act of an all-out struggle but simply as a "warning" to the government and the bosses. This was revealed for example on the question of the duration of the strike: only 4 hours in some industries and the whole day in others. 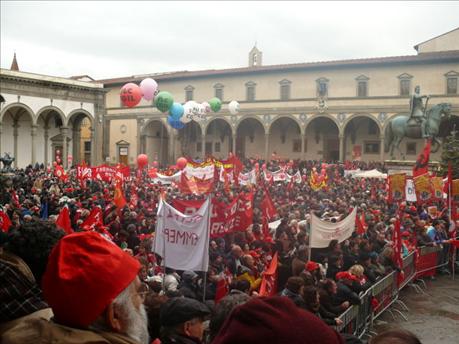 In spite of lack of enthusiasm on the part of the union leaders, the strike was more than justified. The social conditions in the country are appalling, prices have increased disproportionately relative to wages, and there is a widespread perception of a steady erosion of living standards for the majority of the population over the last few decades. According to a CGIL survey, at least 10,000 Italian companies are now in crisis as a consequence of the world recession. FIAT is closing all its plants for one month, leaving its workforce on lay-off pay. The youth is deeply affected by this mood of pessimism about the future of the country. Earlier this year, a right-wing paper owned by Berlusconi's brother, launched a campaign called I believe in Italy, which reveals how worried they are about the generalised feeling of anger and lack of hope amongst the population, feelings that can easily turn into rebellion. The students' movement with its slogan We won't pay for your crisis is also an expression of this.

A tragic problem that has become a rallying point for the workers' movement is that of accidents in the workplace. Greed, lack of controls, corruption, casual and unregistered work (especially involving immigrants) have caused a horrifying but silent number of deaths among workers in Italy, with 1,170 dead in 2007, and in 2008 the figure is expected to go over the 1,000 mark again. In order to remember these working-class martyrs, CGIL members marched during the strike rallies carrying black-ribboned flags. The students and workers are united in their grieving, since on November 22nd, an 18-year-old student, Vito Scafidi, was killed in Turin when the ceiling of his school collapsed because of the lack of proper maintenance due to insufficient funding to state education.

Given this situation, it comes as no surprise that the strike was a success. Notwithstanding the bad weather (there was an actual flood in Rome), up to 200,000 people marched in Bologna where the national secretary of the CGIL spoke at a rally, and other large demonstrations with tens of thousands of workers and students took place in Milan, Turin, Venice, Florence, Rome, Naples Cagliari and another 100 cities. Metalworkers went on strike with participation rates over 50% in all important workplaces, and over 90% in most key factories. 45% of school workers also came out on strike.

Other smaller and more militant trade unions, like CUB, COBAS and SdL, also joined the strike called by the CGIL calling an 8-hour stoppage on the same day chosen by the larger confederation. This was a correct decision that the Marxists have completely endorsed, even if these organisations have often organised separated marches in the past on different days, with the result that they isolated themselves from the bulk of the workers. The same mistaken tactics were adopted by some radical youth organisations, but in many cases the students wanted to stay with the mass of the workers. In an attempt to separate the students from the workers on strike, immediately before December 12th the government gave more concessions by delaying or modifying the implementation of some particularly controversial parts of the education reform. This did not prevent thousands of high school and university students from taking part in the demonstrations, and it actually revealed the weakness of the government and the possibility of a complete victory for the movement.

This strike was based on a platform of demands that were far from radical. Nonetheless, it called for the reversal of the latest attacks by the government (the draft budget, the school and university counter-reforms, etc.) and the launching of an emergency Anti-Crisis Plan. If this two-year Plan were to be implemented, the union leaders claim it would boost Italian GDP by 1.5%.

This is very little compared to the shock therapy the weak Italian economy requires. The reformist character of the proposal is also clear when the CGIL "experts" explain where these resources would come from for such a programme. They propose adjusting the existing budget, by using in a different way the money currently collected through taxation and demanding a more flexible approach from the European Union as far as limits on public debt are concerned. In practice, this means increasing state spending without modifying the current social structure and distribution of wealth and accumulating even more debt (concentrated in the hands of a handful of rich creditors, especially banks and other financial institutions, often based abroad). It is basically good old-fashioned Keynesianism! From a Marxist point of view, this is social democratic nonsense that cannot seriously address the core of the problem. The capitalist economic cycle cannot be avoided, you can only "soften" a recession by pumping in credit at the cost of making the next crisis even more severe. The current crisis is so deep precisely because of the excess credit of the recent period! If the workers are not to pay for the crisis, as the slogans on the strikers' banners said, somebody else has to, and this someone else can only be the bankers, the profiteers, the big capitalists and landlords.

In spite of these fundamental weaknesses, the platform of the CGIL also contained a series of demands that, while not going far enough, still expressed in some way some vital needs of the Italian workers today. An example of this is the call for unemployment benefit for those who are losing their jobs as a result of the present crisis, including those who are not currently entitled to any benefit because they have casual jobs. This demand is a step forward, although it would be more correct to call for an end to the casualisation of labour, a process that started under the centre-left government without any opposition from the trade union bureaucracy. 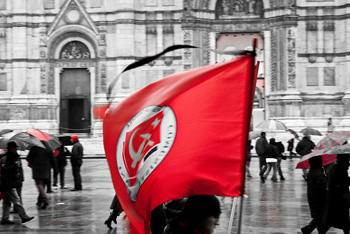 The CGIL is demanding measures to support low-income families and to help people pay their mortgages. The Marxists are clearly in favour of these measures, but we would also demand a sliding scale of wages, control on prices, the reversal of privatisations as a way to stop the increase in fees and costs of services, and a massive plan of state-funded public housing to provide cheap and quality housing to working class families.

The CGIL is demanding measures to support "investment", thus delegating once again to the private sector the creation of jobs and wealth. Experience has shown that this kind of "support" ends up just benefiting private profit with very little (if any) accountability to the public. The state should invest directly and under the control of the workers in projects that are socially useful, like the building of new schools, hospitals and roads, renewable energy sources, etc.

The CGIL correctly also includes the immigrant workers in their list of demands, demanding citizenship rights for all clandestine immigrants and a ban on deportation for those immigrants who lose their job because of the economic crisis (a perverse effect of the racist Bossi-Fini law). We agree on this, but these proposals are raised as an emergency one-off initiative only for times of recession, while at the same time immigration quotas are explicitly accepted by the CGIL leaders as something necessary that needs "to be managed in a positive and more effective way". On the contrary, immigration quotas, by establishing an artificial number of immigrants that are going to have their human rights respected each year, force the others into the position of illegal immigrants with no rights and highly subject to over-exploitation and blackmailing by the bosses.

The contradictions and limited nature of the CGIL demands clearly had an effect in limiting the enthusiasm of the CGIL rank and file towards their own leaders. In the present crisis, the workers' movement requires much bolder policies. And in the coming period the workers will have no choice but to mobilise again and again, in the process building a militant trade union leadership.

The bourgeois opposition Democratic Party (PD) is not really gaining from the movements unfolding in the country. Notwithstanding the fall of support for the government in opinion polls on a national scale, the recent elections in the Abruzzo region produced a majority for the right-wing coalition. The result of the Democrats was particularly bad, but the real winner was the numbner of abstentions, scoring an incredible 47% (turn-out at the ballot box is usually quite high in Italy). This shows the lack of confidence of many Italians towards mainstream politicians.

All this is not surprising, since the official parliamentary opposition (comprising the Democratic Party and two other bourgeois parties, since the Left was given no MPs in the last general elections) is not a genuine opposition. In a recent discussion about raising the age of retirement for women to 65 (it is now 60), the PD Shadow Minister for Equal Opportunities, Vittoria Franco, who was supposed to criticise the government's attacks on the conditions of women, has offered "an alliance" to the Right in order to get this reactionary piece of legislation passed! No wonder people cannot see a big difference between the cabinet presided over by Berlusconi and his friends in the shadow cabinet.

It is the task of the most advanced wing of the trade union movement and Rifondazione Comunista (the Communist Refoundation Party, the main left-wing political party) to provide an alternative to the crisis of capitalism. In this context, the FalceMartello Marxist tendency, supporters of the International Marxist Tendency in Italy and active in Rifondazione Comunista and the CGIL, has an important role to play in organising the best activists of the workers' and students' movements around a Marxist programme and the correct methods of struggle, in order to find a revolutionary way out of the crisis.