Share
Tweet
An overwhelming 95 percent of black voters cast their ballots for Barack Obama in the recent elections in the United States. The scenes on the streets in Chicago and around the country were full of jubilation, as many working people, both Black and white, fervently believe that change is now on the horizon. But does Obama's victory really mean the end of racism in America?

An overwhelming 95 percent of black voters cast their ballots for Barack Obama.  The scenes on the streets in Chicago and around the country were full of jubilation, as many working people, both Black and white, fervently believe that change is now on the horizon. 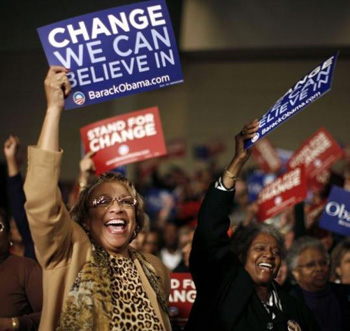 An overwhelming 95 percent of black voters cast their ballots for Barack Obama. But does his victory mean the end of racism in America?

Many commentators from the mainstream media share this exuberance, and have even compared Obama to Moses. Spike Lee, the famous director of such films as Do the Right Thing, Bamboozled, Malcolm X, and others, has gone so far as to say that America has moved beyond race.  The day after the election, he said the following on MSNBC: “It’s a new day.  It’s a new dawn.  It’s a new beginning.”  When questioned about lingering racism, specifically in relation to his 1989 film, Do the Right Thing, he replied, “That is history.  1989 is last century.  We’re in a new day…This is a new America, and America’s made a seismic shift, as I said, and I’ll continue to keep saying, as far as race goes.”  Has America made such a “seismic shift”?  Has the U.S. truly moved beyond racism? We don’t think so.

Racism is interwoven into the very fabric of capitalism. Malcolm X once said: “You can’t have capitalism without racism.” We would add: “You can’t have racism without capitalism.” In other words, we cannot end the scourge of racism, while leaving capitalism intact, and ending capitalism is something that Barack Obama will not, and cannot do.  Obama actually beat McCain by 6 percent amongst voters making $200,000. This is just one indication that the wealthy feel that he is a “safe” choice as far as their interests are concerned.

The fact is, systemic racism still plagues America.  One-quarter of Black Americans live in poverty, according to the U.S. Census Bureau, twice the percentage for whites.  Currently, due to a racist judicial system, more Black men are in prison than are enrolled in college. In fact, despite the immense turnouts of Black voters in this election, over 1.5 million Black men were prevented from voting at all, due to felony disenfranchisement.

So what can we expect from a President Obama to address this systemic problem? Well, not much.  In fact, racism is an issue that Obama has avoided like the plague.  To the extent that he has raised the issue, as we have explained in previous articles, he sees the discrepancy in achievement as stemming from a lack of personal drive and from children “being ashamed in educational achievement,” rather than flowing from institutional racism and class oppression.

In his victory speech, Obama announced that he believes in the core values of the Republican Party: “self-reliance, individual liberty, and national unity;” the first and third being little more than code words for scapegoating and obscuring class differences, respectively. 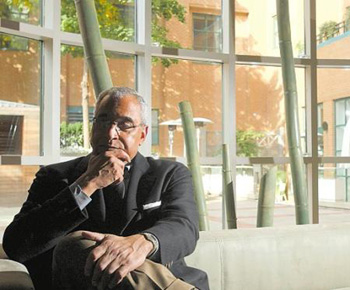 “There is nothing to suggest that Obama will lead America into true post-racialism. His campaign style revealed a tweaker of the status quo, not a revolutionary. Culturally and racially, he is likely to leave America pretty much where he found her.”

This analysis is interesting and insightful, especially coming from a self-styled conservative. However, the problems facing all working Americans, and Black workers in particular, cannot be solved through mere “tweaking.” We need fundamental change.

The sincere hopes that millions of working people have in Obama do not change the fact that he is a defender of the capitalist system, a system in which racism and war play an essential role.  Obama, in his first move after being elected, selected Rahm Emanuel as his Chief of Staff.  This is what the Black Agenda Report had to say about this decision:

“I’m sorry to burst the bubbles of those of you who wept in ecstasy just two days ago, but the truth is still the truth. Obama’s chief of staff is a pro-war democrat who couldn’t figure out how to beat republicans when the voters had turned against them. His appointment is a signal not only that endless war will remain on the table, but that the choice of Obama over Clinton was a meaningless one. Obama is smarter and savvier than Hillary Clinton and he used those skills to be favored by more big money people than she was. That is why he is the president elect.”

We couldn’t agree more. Socialist Appeal has always explained that behind Obama’s rhetoric of “change” lurks more of the same.  Yet millions of people have filled his message of hope with their own content. A reporter for NPR asked a group of Black workers and youth on the streets of Chicago: “What does Obama’s election mean to you?”  A young man screamed out, “Jobs, baby!”  This is the content with which workers of all races and ethnicities have come to fill the slogan of “change,”  and this is what explains the scenes of adulation. But this is a far cry from what the rich have voted (and paid) for.  When the expectations of these millions of workers and young people are not met – and within the capitalist system they cannot be – we will see new explosions of the class struggle in the not-too-distant future.

Obama’s victory proves that integration, not separation, is the deep desire of millions of Black workers and their white class brothers and sisters. However, genuine integration can never be achieved as long as the majority of the population is dominated by a handful of wealthy capitalists. Many Black capitalists are already planning to cash in on Obama’s victory. As one commentator pointed out rather bluntly in the Wall Street Journal: “Black Power Brokers Ready to Rise in Tandem With New President.” These super rich people have nothing in common with the average worker or young person, no matter what color they are.

It is certainly positive to see millions of Black workers and youth energized and entering political life for the first time.  It is equally positive to see millions of white workers and youth show, albeit in a somewhat confused way, that they yearn to wipe the stain of racism from the past.  However, as we have explained time and again, only the socialist transformation of society can truly lay the foundations for ending racism once and for all. Such a transformation can only result from the united struggle of all workers against the bosses.

In the meantime, we need union-controlled hiring halls in the poorest communities; a crash program of public works to create jobs and rebuild infrastructure; the outlawing of all forms of discrimination; and an end to the phony war on drugs that imprisons and disenfranchises millions.  Some of these points were taken up by Cynthia McKinney’s Power to the People presidential campaign, which the WIL supported.

We did not support her because she is Black, but because her program raised important demands that need to be taken up by all workers, particularly Black workers, who most acutely experience the effects of this decaying system.  Ultimately, these demands can only be achieved by uniting the whole of the working class, in a mass party of labor based on the unions, a political vehicle through which we can fight for our collective interests.  That would truly be “change we can believe in.”