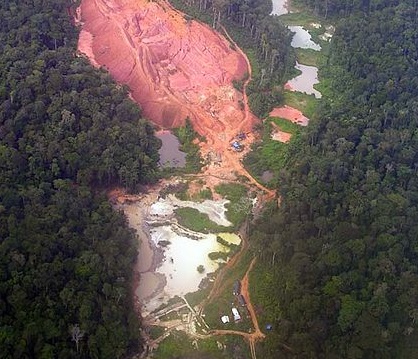 On 25 April 2020, in the midst of the coronavirus lockdown, the Guyana Geology and Mines Commission (GMC) met to debate a project involving an industrial-size, open-pit gold mine in the middle of the Amazon rainforest. The name of the project is Espérance, French for “hope” – hope for whom, one might ask? Despite opposition from environmentalist organisations and local Indigenous peoples, the project was approved.

All of this will greatly benefit the American mining giant Newmont and its local partner, the Espérance Mining Company (CME), which is led by the President of the Guiana Federation of Mine Operators, Carol Ostorero.

As one would suspect, this project is very dangerous for the environment. Just the construction of the required infrastructure will lead to tens of hectares of deforestation. Then, when it comes to the actual mining, it will require digging an open pit, 1.5 kilometres long and over 300 metres deep, to extract 20 million m3 of rock from it.

Additionally, a gold cyanidation factory will have to be built in order to extract the gold from the rock, which will create significant quantities of highly toxic waste. These will have to be deposited behind dams or embankments – in a region with unstable soil systems, and in the middle of ecosystems that have already been weakened by previous exploitation.

The bursting of such a dam would lead to the destruction of entire hectares of the Amazon rainforest – and would discharge tonnes of cyanidated waste into a tributary of one of the largest rivers in Guiana, the Maroni. Yet this river provides water to Saint-Laurent-du-Maroni, the second most populous city of French Guiana.

As if all this weren’t enough, some anomalies have already been registered by the authorities, even on this specific site. An inspection carried out in 2019 noted the presence of mining waste stocked in residue basins, the nature and dangers of which are still unknown, as well as irregular deposits of chemicals. No work has been carried out to restore the site to working order, contrary to what the French Mining Code requires.

The Ostorero gang is already facing a lawsuit from the public prosecutor’s office in Cayenne, the capital city of French Guiana, for enabling a record level of environmental pollution, unprecedented in the history of Guiana and caused by the Gold’or company in 2018. Is a new industrial catastrophe necessary before action is taken to kick these capitalists off the project?

The state: an accomplice in the plunder of Guiana

The capitalists of the Ostorero and Newmont empires are counting on making enormous profits: at the other pole of society, the dearth of the average standard of living in Guiana is enough to set one’s teeth on edge. Before this current recession, which will aggravate the situation, the unemployment rate was approaching 20 percent. Almost 30 percent of the population lives below the poverty line – which is set to €588 per month, compared with €1,026 in metropolitan France. If the latter amount were used as a benchmark, the percentage of people living in poverty would increase to 60 percent. Guiana is one of France’s departments where income inequality is the highest.

The Espérance project is not a novelty. It follows many others of the same type. Guiana is broken up into concessions, which are sold off to the capitalists to be exploited with the consent of the state. This phenomenon has been accelerating since the beginning of the 2000s. The chaotic exploitation of mining resources is a constant under capitalism – and Emmanuel Macron’s demagogic proclamations on the subject do not change this. When he was the Minister of the Economy in the last “socialist” government, Macron approved no less than 11 ore mining permits. He continued his support for the disastrous Montagne d’or (Gold mountain) project until 2019. He was forced to retract his support due to the project’s enormous unpopularity amongst the local population.

It is clear that the collusion between the State and the capitalist class is destructive to the environment. The Espérance project must be stopped immediately, without remission – and the capitalists must be kicked off the site without delay. The bosses of the Ostorero gang must be pursued for not respecting the Mining Code on the Espérance concession.

More widely, Guiana must stop being considered as just a periphery ready to be exploited. Its ecological heritage must be protected from the capitalist vultures. Poverty must be eradicated in order to allow all Guianians to have a decent standard of living. Industrial projects that harm the environment must be strictly forbidden and the rights of the Indigenous peoples respected. In Guiana as in metropolitan France, the whole left and labour movement must mobilise to achieve these goals. The local population must have the final word on the management of Guiana’s resources!