Details
In Defence of Marxism
10 February 2009

Share
Tweet
Workers at PT Timur Selatan, a wood processing company, that produces furniture and wood products, have occupied their factory in response to the bosses’ decision to close it down. The workers need your help to keep their struggle going

On Monday, February 2, the workers at PT Timur Selatan wood processing company, that produces furniture and wood products, occupied their factory. The workers took over the factory in response to the closure that the management had put into effect on February 1. Refusing to pay the regional minimum wage of Rp.825,000 per month (US$72 per month) that the workers have been demanding, management decided to close down the factory, citing the global economic crisis as the reason.

Located in East Java, the company employs 640 workers. The closure of the factory was the culmination of the conflict between the workers and the boss. The boss refused to pay the workers according to the 2009 regional minimum wage regulation that has just been passed. "The factory is closed", said the management abruptly without notifying the workers in advance. Hundreds of workers organized by the militant trade union, SPBI (Solidaritas Perjuangan Buruh Indonesia; Indonesian Workers' Struggle Solidarity) responded by occupying the factory, demanding that it be opened again and the workers receive a wage according to the 2009 regional minimum wage. 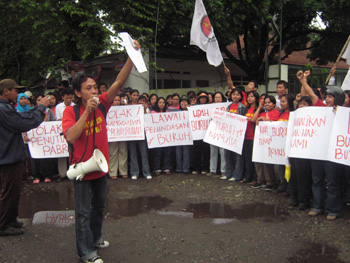 The workers carried many different posters and banners that condemned the decision of the management; some read "Against the Exploitation of Workers", "We are workers, not slaves", and "Workers need jobs, they need to eat". They also sang together by parodying a popular song: "I tried to ask for a minimum wage… minimum wage is refused, factory is closed…"

The factory occupation movement is on the rise internationally. From Venezuela to Brazil, to the United States, to the Ukraine, to Indonesia, to Ireland and many other countries, the workers are occupying their factories. Workers around the world are now fighting back to keep their jobs and are taking militant action. The action of occupying a factory and in some cases running it under workers' control is a big step forward from normal strike action since it poses the question of who owns the means of production. It questions the sacred rights of the capitalists’ ownership of the means of production. 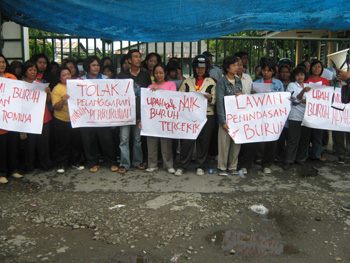 The workers who are occupying the factory depend on a very limited strike fund and solidarity donations from other SPBI workers and surrounding communities. We therefore appeal to the readers of marxist.com to help the struggle of these workers by contributing to their strike fund.

Workers of the world unite!