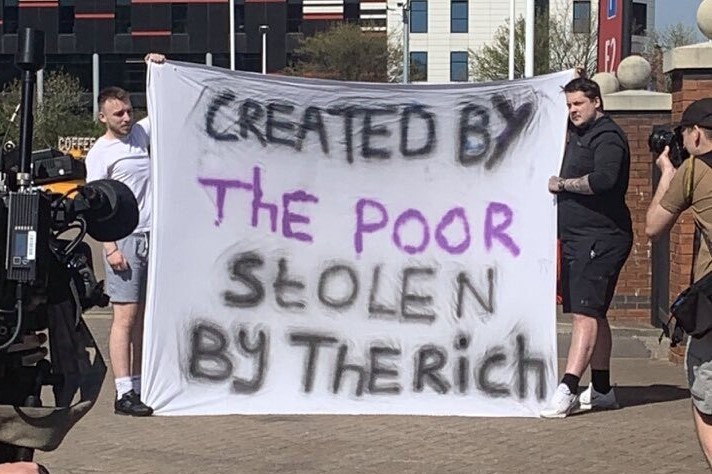 Plans for an exclusive European Super League have been defeated thanks to mass protests by football fans across England. This is a major victory for supporters. But the fight to stop the profiteering and plunder of ‘the people’s game’ continues.

Following huge protests outside football grounds around the country, plans for a new elite breakaway European Super League (ESL) have effectively been killed off – for now, at least.

Sunday’s announcement by ESL organisers provoked an enormous backlash across the board. As a result – under pressure from fans, players, and the government – the six Premier League clubs involved in the proposed competition have backed away.

These protests were not just about the ESL, but about the total lack of say that supporters have in the game. This mood of anger reflects a wider anger over the whole setup: high ticket prices; the elitist Premier League; TV fixtures; corruption in UEFA and FIFA; and much more besides.

Such was the angry mood outside Stamford Bridge, where Chelsea were staggering to a draw with Brighton, that one paper talked of the area having the “feel of a revolution”.

Similar protests took place outside Leeds on Monday – where Liverpool were playing – and outside all the other clubs who had signed up to the ESL.

In truth, what we have seen is the biggest fans revolt for years; certainly since the campaign to cap away-supporter ticket prices. This must be built on.

Despite bogus claims by Boris Johnson, it is the supporters – backed by players and coaches – who have won this battle. Fans rightly saw the ESL as a scam, and said so in no uncertain terms. The Super League system being proposed by football bosses is unfair, elitist, and designed to rip us off.

Imagine what the mood would have been had football grounds been full of supporters, raising merry hell.

The battle over the ESL has shone a light on the rotten state of football today. No longer ‘the people’s game’, it has become a source of huge wealth for a rich few.

Despite the ESL project being knocked back, however, nothing has fundamentally changed.

We say: it’s our game, and it is time to reclaim it.

The ESL clubs (and others) will now regroup and look for a different route to maximise their profits at our expense. This is why these billionaires bought up football clubs in the first case.

Share prices in the ESL clubs went up after the initial announcement, showing what the real driving force behind the move always was.

Interestingly, once it became clear that the ESL project was faltering, UEFA changed their tone. Instead of their previously hostile stance, the organisation started being very friendly again towards the 12 clubs who had signed up to the new (rival) competition.

The reason is simple: they know they need the cash from the top clubs. Indeed, they have been pandering to their demands for years.

The latest UEFA plans to reorganise the main European competitions are a warning. After all, many of the declared features involved in the new proposals are terribly similar to those of the ESL. Most tellingly is what is hidden in the small text, where the official announcement says:

“Further decisions regarding matters such as the rebalancing of the access list, match dates, seeding system, format for the finals, coefficients and financial distribution will be made by the end of the year and potential adjustments to the format approved today could still be made if necessary.”

“Further adjustments”; “potential coefficients”: this reads like a backdoor to further concessions to the rich elite and their hidden backers, the TV companies.

In reality, the interests of the broadcasting multinationals have been hand-in-glove with football’s establishment for decades. They have been pushing for more live games; more ‘viewer attractive’ fixtures – and at times that are suitable for them. 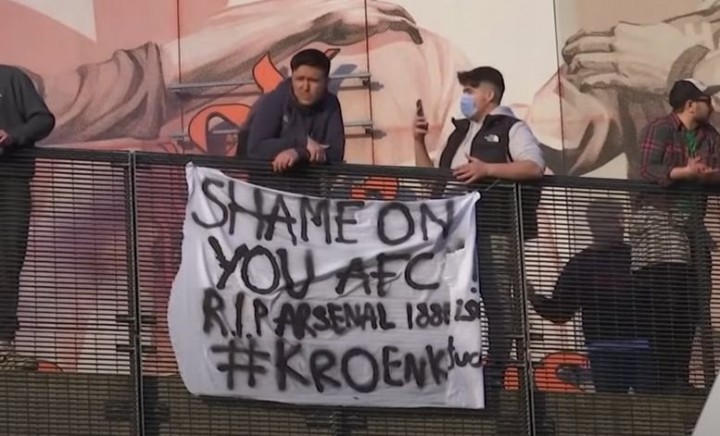 A grassroots revolt is scuppering the ESL, but the fight isn't over / Image: Caught Offside

This is, after all, how professional sport operates in the USA. Games are screened live at all manner of times and places. And a ‘franchise’ system is maintained, which operates as a closed shop, involving ‘teams’ that are better described as ‘brands’.

Ironically, the main attraction of European football to the capitalists is that – unlike US baseball, basketball, etc. – it is not controlled by a dominant federation that regulates spending, wages, transfers, and so on.

The rich clubs in English football’s Premier League, for example, are pretty much free to undermine competition through monstrous overspending. TV money has therefore become central. And, in turn, the big media companies – such as Murdoch’s Sky – are demanding a great deal in return for their cash handouts.

Not too many years ago, football was played in the afternoon. However, even before COVID-19, this was changing, with evening games at a weekend.

The pandemic enabled the TV companies to push through an even wider selection of times: from lunchtime to late evening at weekends; and often with two games per night during weekdays.

Even once fans are allowed back into grounds, TV firms will want to continue this setup in one form or another. The dominance of the giant media monopolies and their interests (i.e. profits) is all over the Premier League and European football already.

Many have made the point that the ESL was just the product of the free market at work. This is true: what we have seen is a reflection of the capitalist system as a whole, where the bosses and billionaires are driven to continuously increase their profits at our expense. The not-so-rich are driven under, and the masses find themselves ever more out of pocket.

This is the ruthless logic of capitalism, based on profit and competition. And as Karl Marx pointed out, this competition always turns into its opposite, with the monopolisation of industry and the concentration of wealth in the hands of a super-rich few.

In the case of the ESL, this assertion has quite literally come about, with the new Super League designed to involve no real competition at all. Instead, the big teams were to be guaranteed a place in this elite tournament involving football’s most famous brands – all to ensure that the profits continued flowing into their coffers.

This is the warning. The ESL has been pushed back, but the system remains. UEFA and FIFA know whose interests they represent. The real problem that these corrupt bodies had with the ESL was that they were not in control and not getting their cut.

As long as the priority is profit, with football clubs run primarily as businesses, all the things that have angered fans the most will return again and again.

Expect new attempts to ‘reform’ the Premier League. Look out for the ESL returning through the backdoor, probably with a UEFA jacket on. Expect football fixtures to be shunted around to all manner of unhelpful times to help TV schedules.

Above all, despite all the rhetoric – from the club boardrooms and from Westminster – expect supporters’ interests to continue to be ignored.

The issue is ownership and control. The rich and wealthy own ‘our’ clubs, and control the likes of UEFA and FIFA. We are just there to act as extras on TV.

The mood of anger we have seen in recent days must be directed now towards the whole rotten and rigged system. This was why the various supporters’ organisations were set up in the first place – not least after the Premier League appeared on the scene.

What is needed is public ownership of the clubs, so that they serve the interests of supporters, players, coaches, and the wider community. Instead, at present, the game is set up to serve the interests of big business: billionaire investors; multinational companies and banks; and giant media monopolies and TV broadcasters.

UEFA and FIFA cannot be trusted. They must be binned and replaced by a genuinely democratic set of bodies that will act in the interests of the game, not their secret bank accounts.

The solution is clear: Fight for the people's game! Fight to be heard! Fight for socialism!

Recent events show that – when united, organised, and mobilised – we can win. Militancy pays. If the ESL can be defeated, then anything is possible.