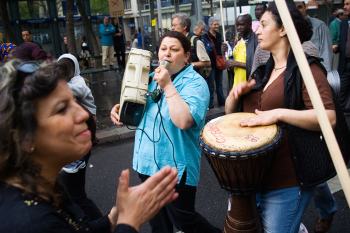 The present economic crisis, through its sheer scale and reach, is bringing about a wholesale change in the consciousness of working people the world over. It is the poor, the oppressed, and the workers who shoulder this weight in order to hold up the privileges of the rich. There is no portion of the working class that has so greatly and extensively borne this affliction than working women.

We are living in a period that can be defined as one of the most turbulent in history. The economic crisis, through its sheer scale and reach, is bringing about a wholesale change in the consciousness of working people the world over. The contradictions and weaknesses of this system are becoming plainly evident as capitalism buckles under its own weight. As always, it is the poor, the oppressed, and the workers who must shoulder this weight in order to hold up the privileges of the rich. There is no portion of the working class that has so greatly and extensively borne this affliction than working women.

March 8, International Working Women’s Day, is arguably one of the most important dates of the calendar for the global labour movement. It is the day we pay homage to the tremendous contributions that female workers have made in the fight for a just society. It is the day we reaffirm women’s place of honour at the head of our movement. More than anything else, it is the day that all workers, whatever their sex, colour, or creed, remind those who seek to divide us that we know that our struggle, our enemy, and our goal, is one and the same.

The conditions faced by working-class women today clearly illustrate the systemic nature of their exploitation. Despite the mouthpieces of the bosses taking up the cry of women’s rights in the last several decades, the facts show that their words are not reflected by their actions. According to the British Trades Union Congress (TUC), the layoff rate for female workers has increased by 2.3% since the start of 2008, almost double that of male workers. According to the International Labour Organization (ILO), 90% of workers in sweatshops are women and young girls.

The corporate media, when it is forced to acknowledge these facts, continually tries to confuse workers by presenting them as a gender versus gender issue. Reuters, in an article on the effects of the slump on women, spends one paragraph talking about the plight of women workers and commits the remainder of its three-page article discussing how many women are CEOs or board members of the largest corporations. The argument made by liberal Feminists is that the progress of women can be measured by how many women hold positions of power in the large corporations and in governments. When Stephen Harper announced a cabinet reshuffle after the last federal election in Canada, bourgeois feminists were delighted when he appointed a record 11 women, or 29% of cabinet, to his Tory government. The Feminist NGO, Catalyst, boasts that the percentage of female CEOs of Fortune 500 companies went from 8.7% in 1995 to 16.4% in 2005. However, do facts like this really mean that the welfare of all women is improving? According to the Canadian Labour Congress (CLC), in the same ten-year period, women workers went from making 72% of a male worker’s pay for work of equal value, to just 70.5%. Having more women cabinet ministers and CEOs has not only failed to improve the lot of working women, pay equity has actually decreased in the last decade and the exploitation of women is as evident as ever. 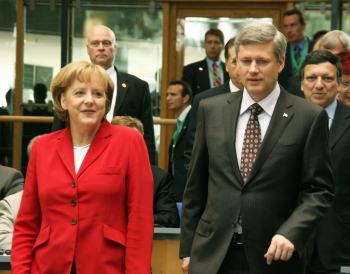 Stephen Harper (right) is heading a government with record number of female ministers but this has not improved the situation for women. The same can be said for Germany's first female Prime Minister (left), who has presided over huge cuts in the welfare state. Photo by franz88 on Flickr.

Capitalism depends on the subjugation of women for its very survival. Sexism, along with racism and every other divisive tool the bourgeois possess, are vital wedges needed to drive apart male workers from their female comrades in order to prevent the rise of the one thing that can undo this system: worker’s unity. Bourgeois women, the CEOs and cabinet ministers, have nothing to gain by ending the disproportionate exploitation of women workers. In fact, they have a vested interest in ensuring that this oppression continues. Keeping female workers at a lower wage than their male counterparts has the effect of putting pressure on male workers to accept lower wages in order to compete for the same jobs, thus repugnantly fostering sexism and pitting worker against worker. Additionally, women are made to form a reserve army of cheap, mobile labour, which is very profitable for the capitalists. There is a reason why women overwhelmingly fill low paid service sector jobs and sweatshops. Capitalism also doesn't count the creation and nurturing of life as real productive work in society and expects it to be done for free, largely by working class women. A woman’s biological role as the child bearer creates a situation where, under capitalism, it is women who are also the ones who have to take up the burden of child rearing. This leaves women with the double burden of being responsible for the care of her children and home, while additionally working to help support them. Shouldering this extra weight leaves the woman worker with little free time to become politically active, organize unions, or, in many cases, even work a full-time job. This leads to women being forced into the most exploitative working conditions, often on poverty wages, thus making their situation ever worse, helping to re-enforce their economic dependence on men. 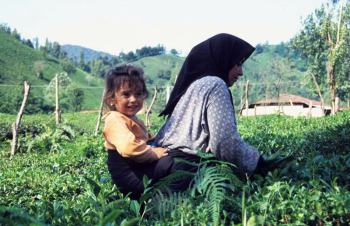 It is this economic dependence that has forced women to endure the most humiliating abuse across the centuries. Even in so-called enlightened Western countries, every day working class women face the choice between poverty, homelessness and losing their children on the one side, or putting up with a violent and abusive partner on the other. Programmes to protect women from these situations, meagre though they are, are also being cut back by governments looking to save money in the financial crisis. However, despite (or perhaps because of) the social and economic hardships that working class women face on a daily basis, when these women rise up to defend their rights, they do so with an unequalled militancy.

Ironically, it is bourgeois women who act as some of the worst exploitative employers of working class women. All one has to do is to take a bus in the early morning through any wealthy neighbourhood to see the army of nannies, cooks, and cleaning staff, largely pulled from immigrant women, who perform the domestic chores of these upper class households. The bourgeois women, of course, are indeed “liberated”. They are free from both the daily grind of wage labour and from the tiresome burden of domestic slavery and can readily pursue the same ends that bourgeois men do, such as politics, business, and academia. This “liberation,” in which the liberal Feminists wish to paint a victory for women, is realistically just the dumping of all these burdens directly on the already overworked mass of working class women.

It is the duty of all socialists to fight against sexism within the labour movement, not only because of its disgusting chauvinism, but more crucially because it is a tool used by the bosses to divide and conquer. The common theme shared by both liberal Feminists and reactionary chauvinists is that men and women have competing interests. Socialists believe this to be untrue. The bourgeois have an interest in maintaining gender divisions, while workers simultaneously have an interest in breaking them down. We fight along class lines for socialism not because, as some academics have stated, “Marxism doesn’t understand the women’s struggle,” but for precisely the opposite reason. Marxism is infused with over 150 years of hard won experience in the struggle against the exploitation and oppression of women. It is through continually studying this living history of our movement that we have understood that there is no solution to the women’s struggle under capitalism.

Only in socialism can a solution be found. Through universal child care, education, housing and healthcare, through the socialization of domestic chores by creating public laundries, kitchens, etc. and through the guarantee of equal pay in a system of full and fair employment, can the burdens placed on working-women’s social development finally be lifted.

On February 20, two Iranian female workers were sentenced to 100 lashes in public. Their offence wasn’t the flaunting of the Iranian regime’s reactionary “virtue laws”. What they did was far more dangerous to the Iranian state   they were arrested and whipped for attending a May Day rally.

We Marxists know, just as well as the ruling class, that the revolutionary potential of female workers is the sword of Damocles hanging over them and their system. In 1917, it was the women of Petrograd that marched from factory to factory, rousing their sons, brothers, and fathers out into the streets in what was the beginning of the Russian Revolution. Just like then, it will be the women who will embody our revolution. It will be the working women who will usher in the end of capitalism, and with it, the end of the exploitation of women now and forever. We say, “There can be no socialism without the emancipation of women, and there can no emancipation of women while the economic slavery of capitalism persists.” 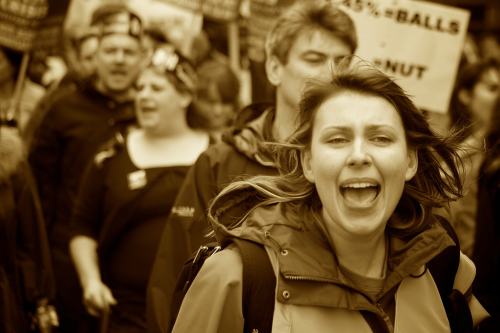 There can be no socialism without the emancipation of women and it will be working women who will usher in the end of capitalism, and with it, the end of the exploitation of women now and forever. Photo by Carlo Nicora on Flickr.