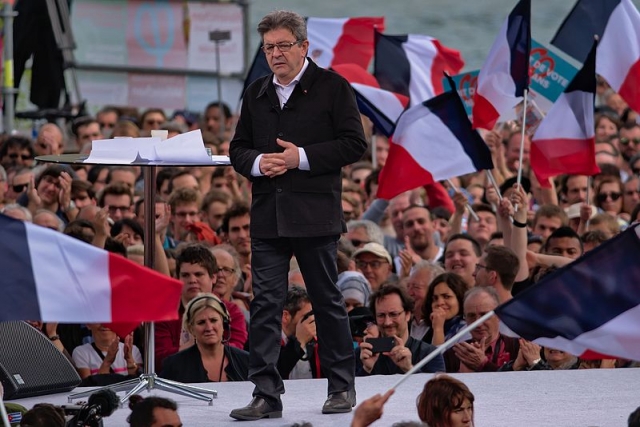 On 23 September, Mélenchon’s France Insoumise (Rebellious France) organised a massive rally of over 100,000 in Paris against the austerity programme of the Emmanuel Macron government. Jérôme Métellus, editor of Révolution (the journal of the IMT in France), outlines what the Left and the Trade Unions in France should do next in the struggle to bring down Macron.

The success of the demonstration organized by France Insoumise on September 23 marked an important step in the fight against the reactionary policies of the government. It is true that it did not make Macron retreat from his offensive against our rights and our living conditions. This will require a movement on a much higher level. But the importance of the September demonstration is to be found in its mass and political character.

The demonstrators were not demanding merely the withdrawal of the new Labour Law, but were protesting against the whole policy of the government. Better still: this demonstration put forward a political programme – that of France Insoumise – and expressed the desire for it to be implemented as soon as possible. This implies taking the struggle to such a level that Macron is forced to dissolve the National Assembly and call early parliamentary elections. Jean-Luc Mélenchon concluded his speech with this perspective in mind, declaring: "at the end of the road, often, there are elections!"

Is this approach of France Insoumise positive from the point of view of the struggle and the consciousness of the masses? Obviously it is. The politicisation of the struggle is indispensable; it is determined by the extreme brutality of the government’s programme itself. In the context of the government opening up major offensives on all fronts (labour law, housing, unemployment benefit, education, pensions, civil service, etc.), it would be absurd and pointless to limit the response of the labour movement to a series of individual struggles of workers from different sections of society responding to individual attacks.

To the extent that the government attacks target all sections of the population (with the exception of the wealthiest), it is clear that what needs to be done is to mobilise all workers, the youth and the unemployed in a common united struggle against all the policies of the government. This should then be built up into a mass struggle for a left-wing programme and government that breaks with austerity. That was the true meaning of September 23.

One can measure the progressive nature of this approach by the reaction it provoked from Macron, his ministers and undersecretaries, and the propaganda of newspaper editors and "political experts" in the mainstream media. They constantly attack Mélenchon: "It is not the street that rules! Macron won the elections: he must be allowed to implement his programme!” According to these people, the workers and youth over the next five years should passively allow themselves to be stripped of everything they have won in the past, to the advantage of the big bosses, with the pretext that Macron won the last presidential and parliamentary elections.

Naturally, their conception of "democracy" is one-sided: when the bourgeoisie is confronted with a left-wing government whose programme attacks its privileges, it does not shrink from using extra-parliamentary measures to bring it to its knees. A recent example was the Greek crisis of 2015, after the electoral victory of Syriza. Back then, we did not hear these champions of "parliamentary democracy" defend the Tsipras government. On the contrary, they encouraged the troika to strangle him. They always put their class interests above everything else – including, of course, their (bourgeois) "democracy".

Unfortunately, a rejection of the need to politicise the struggle does not come only from the parties and media of our class enemies. It also finds an echo at the top of the trade union organisations, which continue to defend "the independence of the trade unions" with regard to all political parties (right-wing... and left-wing!). This position is welcomed and supported with enthusiasm by the Macronists and the right-wing in general. This simple fact should suffice to make us aware of the real problem here. Let's put it bluntly: "trade union independence" is a misconception and is ultimately reactionary. It sets up an artificial barrier between the trade union struggle and the political struggle. In practice, this is always the game of the ruling class. 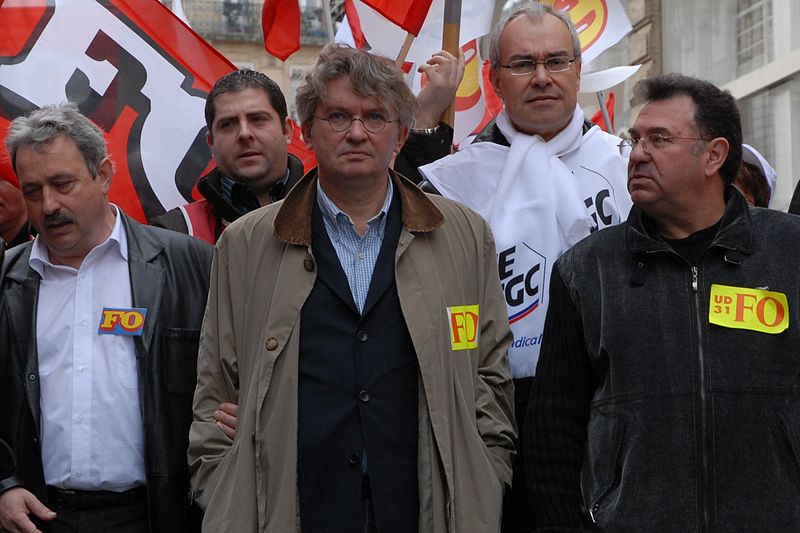 Above all, it is important not to confuse "trade union independence" with democratic control of the members over their unions. It is clear that trade union activists must democratically control their organisations. But this is far from being the case. For example, when did the FO and CFDT activists have the opportunity to approve the new Labour Law? Never! Mailly (FO secretary) and Berger (CFDT secretary) were careful not to consult their rank and file on this major counter-reform. In this sense, they are "independent"... of their own active rank and file. On the other hand, they are not at all "independent" from the party of Macron, since they backed a fundamental policy in his reactionary agenda (and most other policies as well). Thus, in the mouth of a Berger and a Mailly, "trade union independence" becomes nothing more than bureaucratic trickery at the service of the big bosses. Who, today, can seriously claim otherwise?

The leadership of the CGT, on the other hand opposes the Labour Law, as does France Insoumise. The question is: How can these two organizations come together in the most effective way, in the interests of taking the struggle forward? Unfortunately, the idea of "trade union independence" does not help clarify this issue. On the contrary, it serves to confuse matters.

The Macron government has announced a series of counter-reforms, which it intends to implement very quickly. At bottom, this is a declaration of war against the youth and labour movement. It stems from the specific crisis of French capitalism, which no longer leaves any room for the bourgeoisie to delay its attack. We must therefore organize a massive response against the whole of government policy - not just against the Labour Law.

We have to ask ourselves whether such a response possible? Are the youth and workers ready? We can only verify this in the struggle itself, but we already have a number of positive indications: the collapse in the popularity of Macron in the opinion polls and the success of the demonstration of September 23, for example. To this must be added the experience of 2016, which underlined the militancy and radicalization of the workers and youth (massive demonstrations, renewable strikes, Nuits Debout). And, of course, the 20% won by Mélenchon in the presidential elections expressed the same process of radicalization.

How can we organise this general response to government policy? And what forms of struggle should we develop? Here, the experience of the two great waves of struggle in recent years (2010 and 2016) revealed the ineffectiveness of the "days of action" - which in effect were not real 24-hour general strikes, but simply mass demonstrations. The bourgeoisie and its politicians do not fear such days of action, even when they have a mass participation. They will only retreat in the face of the development of a renewable strike movement that embraces an increasing number of sections of the working class. This could begin with a genuine 24-hour general strike, with careful preparation, systematic mobilisation and General Assemblies in the workplaces. Then, depending on the outcome of the 24-hour general strike, it would be possible to assess whether a recallable strike would be feasible, which sectors of the working class to call out, etc.

What does Martinez (CGT general secretary) have to say about all this? Absolutely nothing! He does not draw any lessons from the defeats of 2010 and 2016. He proposes no alternative strategy to the "days of action". Here is where the problem lies. This so-called "trade union independence" does not answer and cannot answer the problem. In the end, "the independence of the CGT" is reduced to Martinez defending the mistaken, impotent strategy, which he wants to pursue... totally "independently" (especially from his own rank and file, many of whom are demanding tougher methods of struggle). It is easy, therefore, to see why the Macronists cherish such "union independence"! 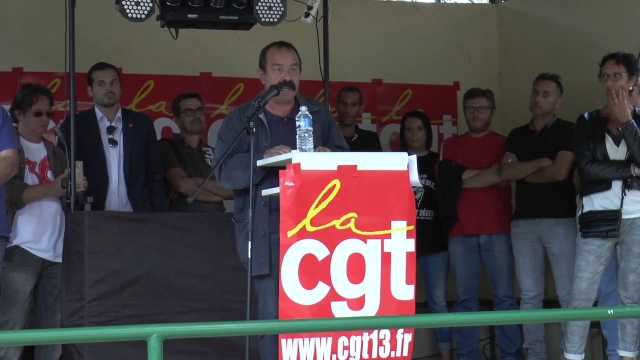 With regards to France Insoumise, massive demonstrations can play a positive role by politicizing the movement and providing it with a progressive programme; but these mass demonstrations alone will not suffice to push back the government. Mélenchon is calling for a million people to march down the Champs-Elysées in a few weeks’ time. That is excellent! This would be one of the biggest political demonstrations in the history of the French labour movement. It would undoubtedly destabilise the government. Even then, however, it is likely that the government would hold on unless this mass political mobilisation was combined with a powerful movement of renewable strikes. Now, who is it that can organize strikes in the workplaces? It is not France Insoumise. Certainly, it would have to contribute with all its force; it would provide a very powerful political lever to the strike, with the perspective of a "people’s government", to use a slogan of Mélenchon. But on the ground, in the workplaces, only the trade unions have the ability to mobilise workers in a powerful strike movement.

The only conclusion one can draw from all this is that we need to use in a conscious, concerted and planned manner, the trade unions’ ability to mobilise in the workplaces to draw people into a mass political struggle against the policies of the Macron government, for its overthrow and for the election of a "radical left" government. Once again, we are not saying that all this is necessarily possible in the short term; it can only be verified in action. What we are saying is that this is the perspective that we should base ourselves on and which the trade unions, France Insoumise, the PCF and all the left forces should work towards. One thing is certain: such an offensive strategy would generate much more enthusiasm among the population than the routine "days of action" that everyone knows beforehand will not shift the government by one millimetre. 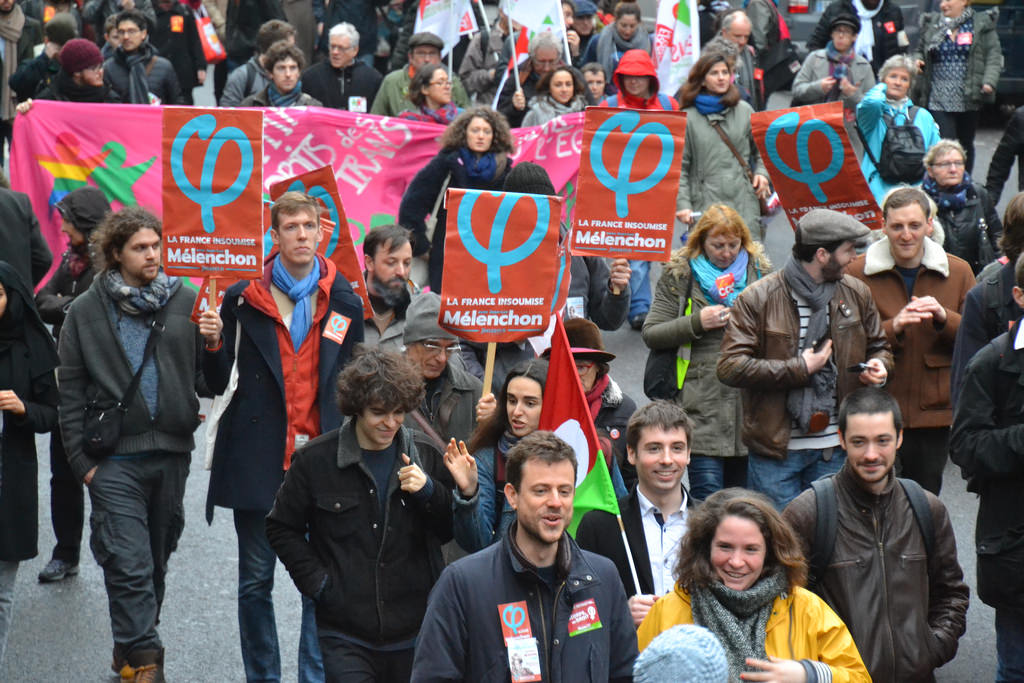 It is pointless to try to escape politics by taking refuge in the high-sounding phraseology of "trade union independence". It is a fiction, an illusion, and very often pure and simple hypocrisy. The Macron government has declared a social war against our class, and it is a fight to the finish. Either it will end in the destruction of decades of social gains of the labour movement, or we will stop it and in the process bring to power a government of the "radical left". We have explained elsewhere what we think should be the programme of such a government. Here we repeat the need for a united front of the political and trade union organisations of the workers and youth – against the Macron government and for a left alternative to austerity policies.