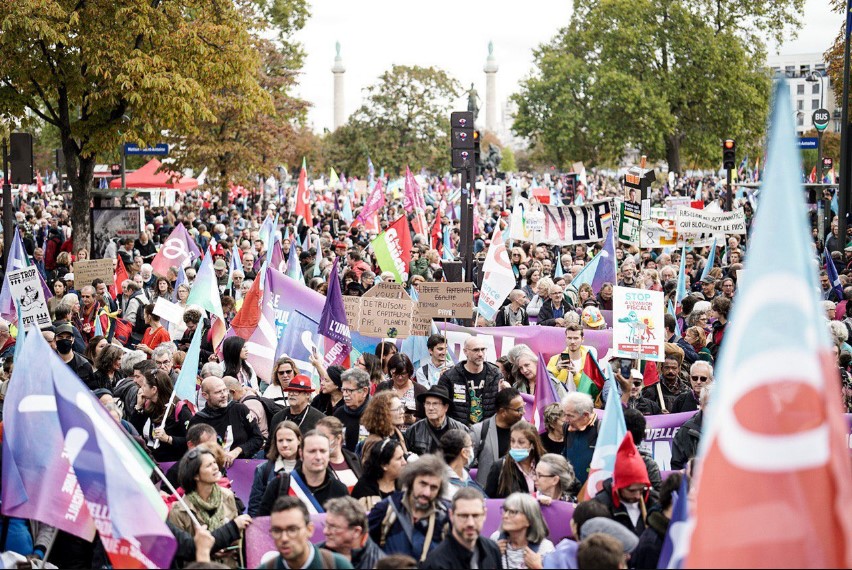 The Bank of France has once more revised down its projections for the growth of the French economy: in 2023, GDP is predicted to experience somewhere between a 0.5 percent fall and a meagre 0.8 percent growth. Analysts from Deutsche Bank, meanwhile, estimate that French GDP could slump by over 1 percent. This would, fatally, translate into a sharp rise in unemployment and poverty.

Read the original in French |

In fact, the world economy is so fragile, so ridden with debt, instability and inequality, that France could slide into a far more severe recession. Any of a number of ‘accidents’ could relentlessly exacerbate the situation. There is, of course, the war in Ukraine, the development of which could have more or less severe consequences on European economies. This war is far from being the only source of such potential accidents however.

The new British Prime Minister Liz Truss, for instance, has astonished her global peers by announcing a plan to drastically cut tax (primarily for the richest, of course) in the context of an immense surge of Britain’s public debt. Far from rejoicing over these announcements, however, the big British capitalists and international markets reacted very negatively. The pound immediately fell to its lowest historical level against the US dollar. Having come to power hardly a month prior, Liz Truss was reprimanded by the IMF in a tone usually reserved for the former colonies. The IMF fears that the insane policies of the British government should precipitate a financial crisis of epic proportions.

The battle over pensions

It is in this context of recession and extreme instability that Macron’s government detailed its latest offensive against our pensions. The legal age of retirement is to be pushed back by four months every year, to reach 65 in 2031 (as against 62 today, barring exceptions). 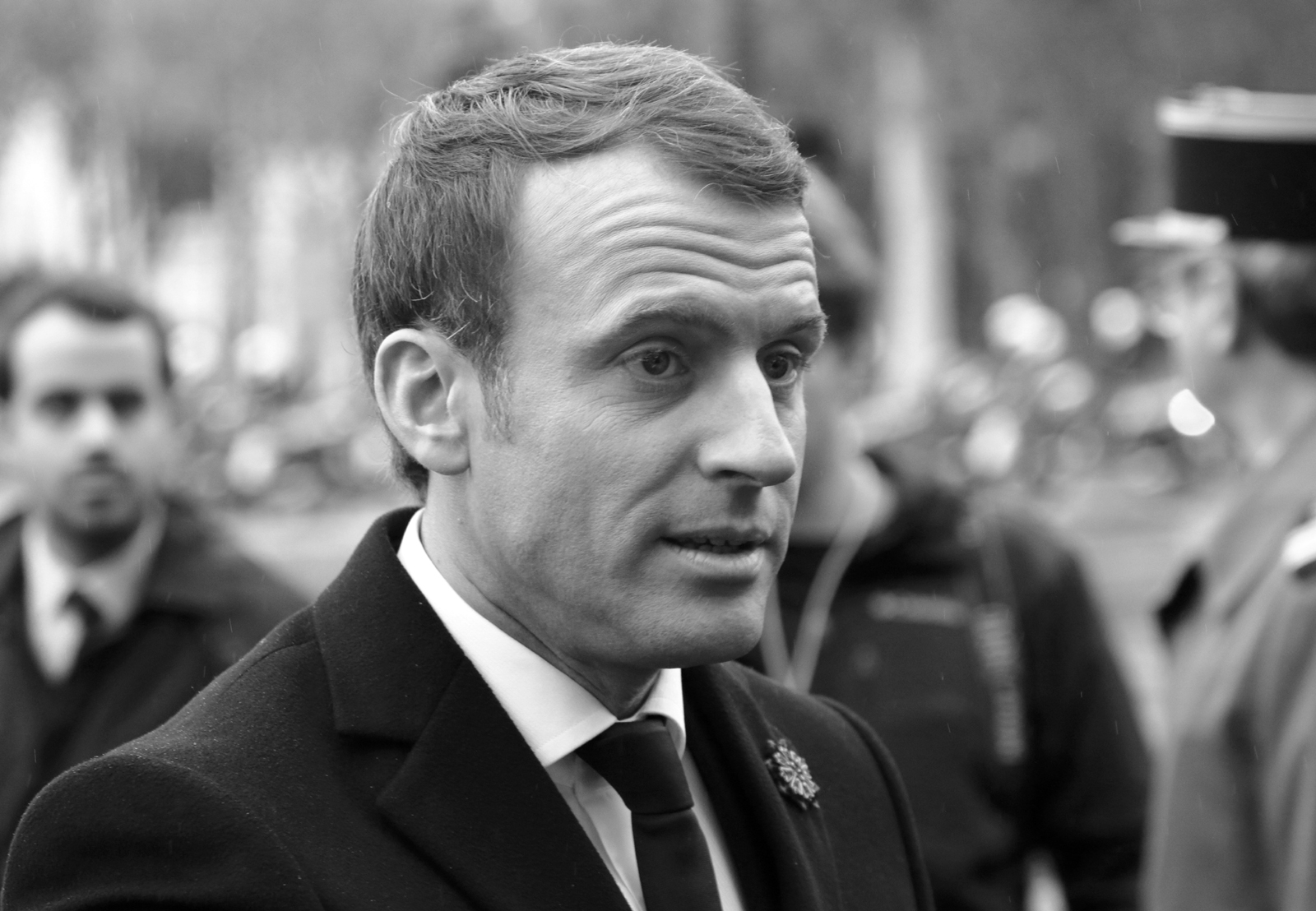 Macron’s government has detailed its latest offensive against pensions in a context of extreme instability / Image: Remi Jouan

Over the last 30 years, numerous French governments have taken the fight to the pensions’ system. Their offensives have often provoked mass movements. In December 1995, the Juppé plan – which attacked civil servants’ pensions amongst others – was swept aside by a powerful all-out strike of the whole civil service and a layer of the private sector. In March 2020, the crisis triggered by COVID-19 forced Macron to bury his pensions counter-reform, after multiple months of struggle. But with these exceptions, previous governments have moved from victory to victory on this question, despite the repeated protest of millions in the streets.

We have stated and repeated time and again in the pages of our newspaper, Révolution: the trade unions’ so-called ‘days of action’, massive as they may be, cannot force the government into retreat. And as they are ineffectual, they are logically able to mobilise fewer and fewer people. The day of action on 29th September, for instance, went by unnoticed for the most part.

The government will only retreat faced with the development of a vast movement of all-out strikes gathering a growing number of sectors. Yet the leaderships of the various trade unions refuse to recognise or offer an explanation for this – and therefore they refuse to prepare our class seriously for such a movement. This is an important obstacle, but only a relative one. The passivity and moderation of the leadership in the trade unions cannot prevent social anger from coming to the fore in a radical fashion, which must occur sooner or later. We saw it with the yellow vest movement in 2018 and 2019.

Over the last twenty years, all the conditions for a repeat of May 68 have accumulated. The inflationary crisis is now another contributing factor. It is already translating into an important wave of strikes at private companies, and it increases the likelihood of a social explosion on a national scale. This is in fact what explains the hesitations and splits in the government’s parliamentary majority over the programme for its coming counter-reforms.

The march of 16th October

On the initiative of the France Insoumise (FI), a “march against the cost-of-living and climate inaction” will take place in Paris on 16th October. [Click here to read more] Révolution calls on its readers to participate and mobilise. Of course, this march alone will not push back the government. But insofar as it targets the whole of Macron’s reactionary politics, it takes on a political and offensive character, which distinguishes itself favourably from previous days of action that assumed a strictly ‘syndicalist’ character. Mélenchon states this in his blog post of 30th September: the 16th October will be “a global challenge to the politics of Macron’s régime.” 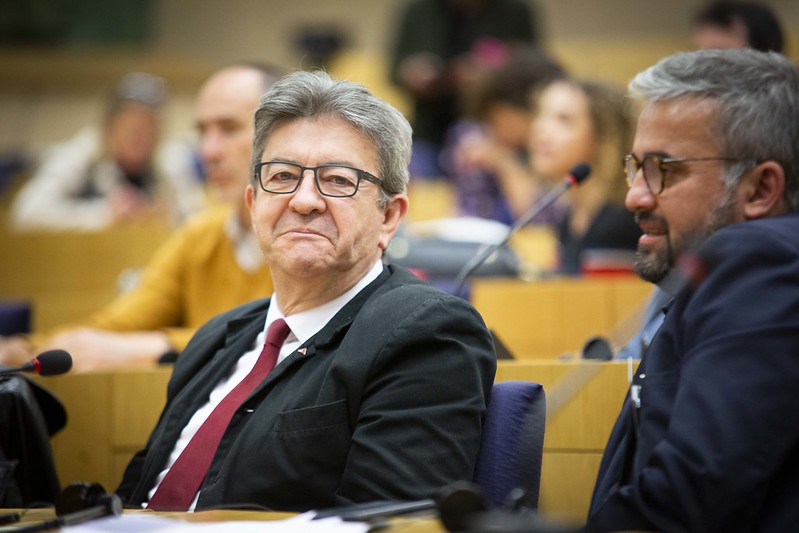 Mélenchon's rhetoric ignores the fact that NUPES did not create an electoral dynamic last June / Image: The Left, Flickr

In the same post, Mélenchon evokes the possibility of a dissolution of the National Assembly [French Parliament] – to be momentarily triggered by Macron – and therefore of a snap election. He asserts in this regard: “Dissolving [the assembly] would give us the chance to see the President’s parties pulverised. We could win and apply our programme. A Republican right could be reborn. The noisy connivance of the RN [National Rally] with Macron would be punished by the people, whom Marine Le Pen has betrayed by not voting to censure [the government and] by refusing the increase of the minimum wage.”

We do not share the strange hope of a “rebirth” of the “Republican right”. In our humble opinion, the inheritors of Juppé, Chirac and Sarkozy can all go to hell. But most important, the perspectives formulated by Mélenchon brush aside multiple important political factors.

When Macron “threatens” to dissolve the Assembly in the short term, he does not do so seriously, as he knows that his own party would come out of early elections in shreds. What is more, neither the RN, nor the Republicans have any immediate interest in provoking the fall of a government through a joint motion of censure together with [Mélenchon’s] NUPES. A dissolution will therefore only be possible under the impact of a powerful movement of workers and youth. Only mass struggle can constrain the power – or the parliamentary right – to launch a snap election.

However, this perspective also raises other questions. Mélenchon writes: “we could win the election and apply our programme”. By “we”, he means NUPES. Yet, whatever the leader of the FI may say, NUPES did not create an electoral dynamic last June. On the contrary: there were a million fewer votes for the left than in the June 2017 parliamentary elections. Certainly, the alliance with the Socialist Party and Greens allowed more seats to be won than in 2017. But it did not arouse enthusiasm within the exploited and oppressed masses: the Socialist Party and Greens are widely discredited within their ranks. Yet the discrediting of these two parties – a fact that their leaders entertain with implacable moderation – still undermines the electoral potential of NUPES. To this may be added the regular and deplorable declarations of Fabien Roussel (French Communist Party).

What’s more, while Mélenchon affirms that “the noisy connivance of the RN with Macron would be punished by the people, whom Marine Le Pen has betrayed by not voting to censure [the government and] by refusing the increase of the minimum wage,” he neglects a factor that weighs far heavier on the popular electorate than the hide-and-seek games of the RN in the National Assembly: Marine Le Pen is not and has never been in power. In Italy, this was the main advantage of Meloni and her far-right party, which recently won the parliamentary elections there.

In the absence of a sufficiently radical left alternative (and NUPES, by its very essence, does not meet the requirement), it is the far-right that risks benefitting from the deep economic and social crisis on the electoral plane. At least until it discredits itself once in power, as the case of Italy will shortly demonstrate. But if we wish to avoid the stage of a far-right government in power in France, the leadership of FI must cease this game of selling us smoke as if it were fire – i.e. NUPES, which is sold as “a powerful and influential tool” that defends “a line of breaking with the system”.

This “break” must be with the capitalist system, of which the leaders of the Socialist Party and Greens are the ardent lackeys. The task therefore falls first and foremost to the FI to clearly defend this line, if it wants to break the far right’s dynamic.